Last night about 120 people enjoyed hearing from both Sheriff Mike Lewis and Congressman Andy Harris, as well as words of wisdom from our sixteenth President. Here he waits his cue to walk into the gathering.

For me, this year was a little different as I subbed for our treasurer, who usually checks people in at the door. So I saw pretty much everyone who came in – actually, on my arrival I stopped Salisbury City Councilman-elect Muir Boda and his wife from going to the wrong floor. We were literally the first three there. 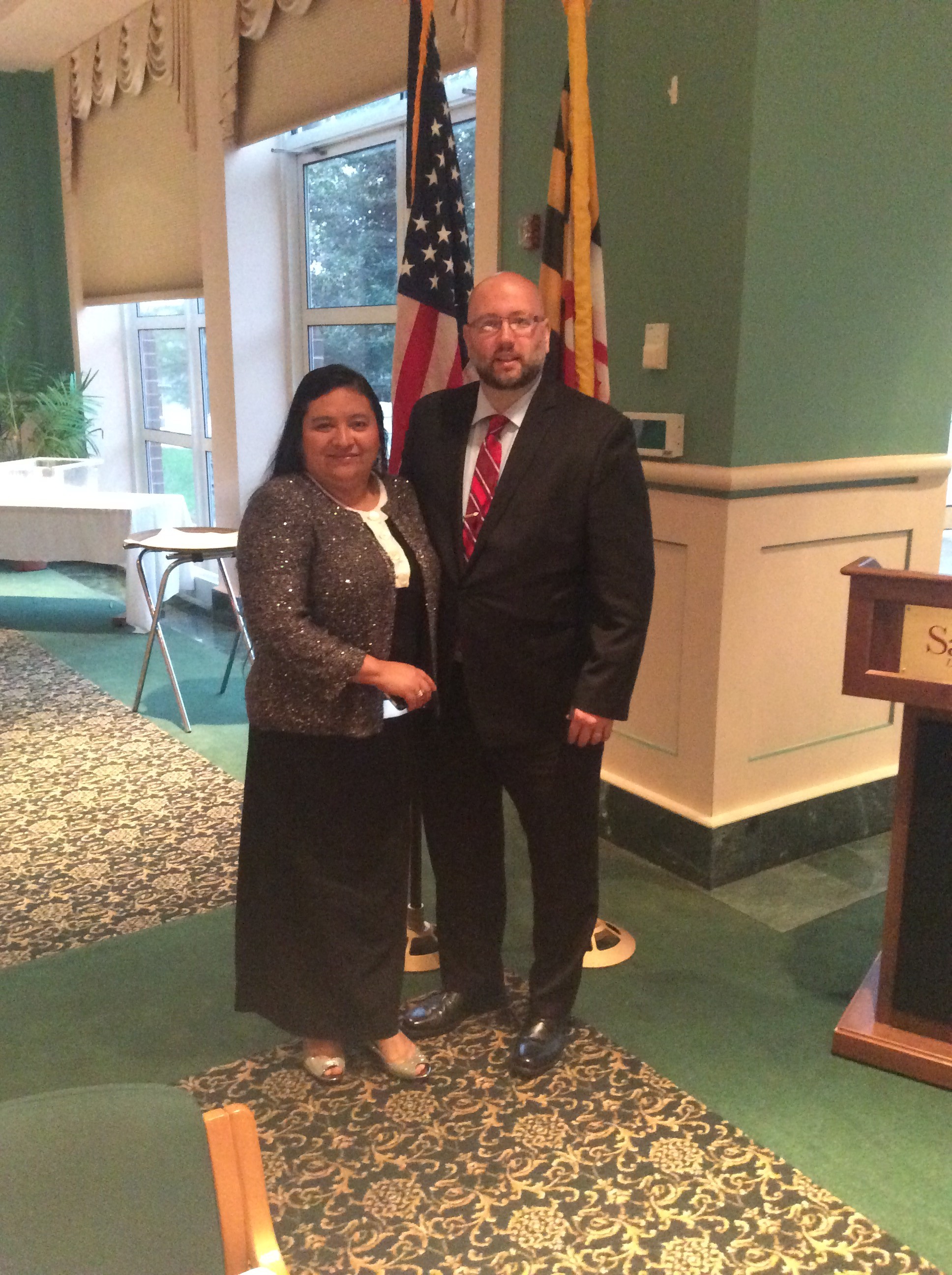 So by the time Lincoln and his band of Union irregulars arrived, we had a pretty full house.

It should be noted that most of those present were from Wicomico County, but we also had contingents from surrounding counties as well as a table from Montgomery County. We also had state leaders from the Maryland Federation of Republican Women and state GOP Chair Diana Waterman.

Now because I was wrapping up my duties with a couple stragglers, I didn’t catch all Lincoln had to say. But I recall he spoke about the press of the day, how candidates were vetted in an age when communication was becoming faster but still could be measured in months, and compared how voters were informed and educated then to now.

I finally got to relax, eat, and enjoy what Sheriff Mike Lewis had to say.

Lewis praised the Salisbury University College Republicans for their involvement, saying they “have to speak up” as representatives of their generation. Next year’s election will be “the most important day of our lives.”

Reflecting on his fairly recent fame – he just returned from a speaking engagement in Fresno, California – he noted they were trying to recruit him to run the Fresno Police Department but he had no desire to leave Wicomico County. “I’m extremely humbled” to be sheriff, said Lewis.

Mike pointed out that gun violence in Maryland was on the increase despite the passage of Senate Bill 281 in 2013, which he added was promoted by the sheriffs in both Baltimore City and County. So far in 2015, though, shootings have increased in Maryland from 725 to 1,161 while homicides have risen from 314 to 459. “Thank you, Governor Martin O’Malley,” said Lewis, tongue firmly in cheek. The sentiment of “thank God for Larry Hogan” was much more sincere.

Lewis blamed “failed Denocrat leadership” for the woes in urban areas like Baltimore, Chicago, and Detroit. On the other hand, Lewis believed America needed statesmen in order to return our liberty and restore us to being the land of the free.

Turning to the drug issue, Lewis called State’s Attorney Matt Maciarello “a tremendous partner” in the drug fight. It’s a fight which has struck home for many in the area – Lewis has a 38-year-old niece who he had to lock up again for possession. “She doesn’t want our help,” said Lewis. He also related the story of the grandson of a terminally ill man who removed the elderly man’s morphine drip and stuck it into his arm.

Politically, Lewis believed we needed to identify key people to represent “Eastern Shore values” in our government. “I’m so concerned about the lack of patriotism” in this country, said Lewis, calling on us to “make sure you vote right.”

Lewis yielded the stage to Congressman Andy Harris, who was praised for being “incredibly optimistic” by Wicomico County GOP chair Mark McIver, who served as the emcee for the event.

Harris picked up Lewis’s baton on the drug issue, saying we needed to “do all you can” to keep drug legalization from the Lower Shore. The District of Columbia “made a big mistake” on marijuana, added Harris. While the merits of medical marijuana were up for debate – Harris seeming to be on the skeptical side – his fear was having a workforce too stoned to be productive.

Changing gears, Harris noted that the “true blue” states of Massachusetts and Maryland now had Republican governors. He chalked it up to a situation, more specific to Maryland, where “government has failed them entirely.” Electing GOP leaders was “no accident,” he added.

Showing his optimism for 2016, Harris said, “I think things look good, actually.” He also believed our late April, winner-take-all primary was key in an election where he noted Karl Rove thought there was the possibility of no candidate having enough delegates to win on the first ballot.

Andy went on to speak about the Republican field’s diversity, pointing out Ben Carson was “the most serious African-American candidate” in history. This was intriguing because Carson, who Harris said he’d known since the early 1980s, was the “farthest person from a politician you could ever get.” Moreover, with two Hispanic candidates the possibility was there to secure 40% of the Hispanic vote, which was the fastest-growing minority bloc.

As for the U.S. Senate race here in Maryland, on the Democcratic side Harris described Chris Van Hollen as “the consummate insider,” while Donna Edwards was “to the left of Bernie Sanders.” Elijah Cummings could get in the race, but there was the issue of his reaction to the Baltimore riots. “You own it, Mr. Cummings,” said Andy.

Harris then revealed that Delegate Kathy Szeliga would be here in Salisbury Thursday afternoon as part of a statewide tour to promote her U.S. Senate bid. If she wins, said Andy, “Maryland is no longer a blue state.” He called Szeliga “the Joni Ernst of Maryland,” referring to the Senator from Iowa elected last year. “We can’t keep doing business as usual in Washington,” concluded Harris.

Despite the previous admonition by McIver that neither Lewis nor Harris would take questions, Harris took them anyway. First out of the chute was how Paul Ryan won him over.

Ryan was an “excellent” choice for Speaker, with Harris arguing he’s “not a moderate.”

But this led to a more philosophical answer, with Harris believing Ryan could unite the House and re-establish the “natural tension” between the legislative and executive branches, rather than the artificial battle between parties that Barack Obama and Harry Reid took advantage of to amass power for the executive branch. He opined that legislation from the House will be conservative, even with some Democratic amendments, but this was a way to make the House united.

The way John Boehner did things, contended Harris, was “not the way to do business.” He used that example to answer the next question about government shutdowns, saying that you can’t embararass the Senate into action with just a few hours to act. Ryan would work to do things in regular order, which puts the onus on the Senate to act.

Harris then answered a question about why Congress is held in such high disregard by the rest of government by claiming “bureaucracy has become the fourth branch of government.” He called on the next GOP president to be “merciless” in cutting bureaucracy.

Finally, in answering a question about VA treatment, Harris made the case that a veteran from Princess Anne shouldn’t have to drive by a care facility in Salisbury to go to a VA clinic up in Baltimore. When an average VA visit costs $250 compared to $65 to $85 in the private sector, “it is time we privatize” VA health care.

(Funny, some guy I know wrote a book three years ago with that same idea, among others. But I wasn’t standing behind this podium.)

One other aspect of the LDD worth mentioning is the silent auction, where we had a table full of items from books and gift baskets to experiences such as lunch at the Capitol Hill Club or shooting with Harris or a State House tour and lunch with Delegate Carl Anderton, among many others. That turned out to be a success, too. I thought I had a photo of that spread but turns out I didn’t. Oh well.

The SU College Republicans also did some fundraising, doing a pay-per-vote poll for President and selling T-shirts.

We may stay with this fall date next year, although it may wait until after the election – meanwhile, we may do a second fundraiser in the spring/summer. It turned out to be a good event to continue building on, so we shall see how we ended up doing when the bills are paid.