Certainly it wasn’t quite a full house, but after a series of false starts with our list of speakers, the 2013 Wicomico County Lincoln Day Dinner still drew around 80 people last night.

Billed as an event focusing on the Second Amendment, it was that and more. For one, it was an opportunity for all three aspirants for the state party Chair race to meet the most active Republicans in Wicomico County. While I have Greg Kilne (right) in the photo below with fellow Red Maryland writer Brian Griffiths (left) flanking Andy Harris’ local liaison Bill Reddish (in the center), Collins Bailey and current interim Chair Diana Waterman were present as well.

It’s worthy of noting that Kline and Bailey were there well before the event began, while Waterman arrived closer to time. Perhaps she wasn’t thrilled about being questioned right out of the gate, but I don’t believed she stayed long after the event to mingle, while Bailey was among the last to leave.

While one of the two featured speakers, Charles Lollar, is being mentioned as a possible candidate for governor – more on that in due course – another prospective candidate for Maryland’s top job was making his rounds as well.

Craig was being introduced around the room by local supporter Ann Suthowski. He also stopped to greet Lollar and his lovely wife Rosha.

But the bulk of the time was taken up by our featured speakers, including the President in question himself.

Art North has made somewhat of a cottage industry out of his admiration for our 16th President, since he now regularly appears at other local Lincoln Day dinners. For ours, he had two re-enactors posing as Civil War troops and his photographer, Matthew Brady.

Hopefully none of these men consider a run for Congress, because re-enactors tend to attract unwanted attention.

But Lincoln’s message was one more tailored for the modern day. He made the point that to give up on the fact man can make himself in a free society like ours would be to give up on prosperity. “In your era,” he continued, Saul Alinsky camouflaged his intent with deception “foisted upon the general population.”

In his day, though, the tendency for class warfare was kept in check by the knowledge that hard work, diligent study, and striving for success were possible in America. A shoemaker’s son didn’t have to follow in his father’s footsteps, said Lincoln.

Honest Abe also decried the evolution of our educational system from the dictate of the Northwest Ordinance, which led to the introduction of state control of schooling in the affected states (Ohio, Michigan, Indiana, Illinois, Wisconsin, and Minnesota) to the modern “massive federal control of our education system.”

Who knew Lincoln was such a political animal?

Bill Reddish was called to the microphone to make an announcement about the townhall meeting called by Sheriff Mike Lewis and attended by Congressman Andy Harris tomorrow night at 7 p.m. at the Wicomico Youth and Civic Center.

He commented that a similar event in Worcester County split about 80-20 toward a pro-Second Amendment crowd. Originally they expected 75, but 250 attended that event so one would expect the WYCC to be similarly crowded.

(As an aside, we will hold a very brief, almost pro forma Wicomico County Republican Club meeting tomorrow so those attendees can get to the townhall meeting and speak if they desire.)

Because Charles Lollar needed to return to the Washington area to do his job, we allowed him to speak first.

It was a long day for Lollar, who had spoken to a men’s conference early in the morning in Baltimore, at the New Antioch Baptist Church; an event at which he was “well received.” They “embraced” his strong Second Amendment stand, Charles added.

“I am convinced our greatest days are in front of us,” he noted, but pointed out we are at a “pivotal crossroads” in our history. Referring to the state of Maryland, Charles warned “we can’t afford our lifestyle,” claiming that $9.2 billion of a $35 billion state budget comes from various federal grants and stimulus money. We bring in only $26 billion of a $35 billion expense tab, said Lollar.

And he made the case that “sequestration is taking its toll, one step at a time” because Congress isn’t doing its job.

He laid out a stark choice for our nation: either a “national revival of our Constitution and Declaration of Independence” or the “beginning of the end of a great nation.” He was heartened, though, by the 5,000 Marylanders who showed up at the pro-Second Amendment rallies, and when it was mentioned by one observer that he didn’t know there were 5,000 Republicans in Maryland Lollar pointed out “these aren’t just Republicans.”

“The biggest fight is for our dollars and our amendments,” said Charles, who believed as well that “losing our freedoms” wasn’t just a Maryland problem, but a national malady. Working for a dollar and only getting fifty cents from it thanks to taxes was “a form of slavery,” opined Lollar.

But it wasn’t just financial issues for Lollar. There’s a danger “when you start messing with the base of the stool” that our nation was built on: morality, ethics, and God. Charles pointed out that, over our nation’s history, it’s been responsible for more evangelicals than all other nations combined.

It’s that moral foundation which makes it necessary to defend freedom “by any means possible,” and the Second Amendment “is the lifeline of your freedom.”

Charles also reacted to the concept that he takes things so seriously. He grew up in a home which stressed taking responsibility for his actions, he explained, which led him to plead that we “stop playing (political) games with each other in 2013.” “Take some things seriously,” he continued. “My concern is for my country and my concern is for my state.”

Lollar went on. “There are nations salivating for our demise.” He urged us to be like the signers of the Declaration of Independence and “put your name on the document.”

Charles was even serious enough to remark on the standing ovation he received at the end of his remarks, “I haven’t earned that yet.”

Lollar has always had a gift for public speaking, though, and while he hasn’t yet tasted electoral success he’s been in the trenches with his New Day MD PAC and past leadership of AFP Maryland.

I also spoke with Karen Winterling, who’s been pushing the “Draft Lollar” movement. I learned that, due to the Hatch Act, Charles couldn’t make an official announcement on the 2014 governor’s race until June. But Winterling already had an army of 250 volunteers around the state and was hoping for “another 30 tonight.”

Someone else who could get thirty volunteers in a heartbeat was the evening’s final formal speaker.

“I don’t work for Martin O’Malley,” explained Sheriff Lewis. “I work for the 100,000 people of Wicomico County.” He clearly stated that the county sheriff is the “first and last line of defense against tyranny,” and pointed out a number of his counterparts from around the state will be present for Monday night’s townhall meeting here in Wicomico County.

He also made the case for the right to bear arms. “Who am I to tell a citizen they can’t defend themselves?” Lewis asked. He also expressed his admiration for America’s most famous sheriff, promising that “Sheriff Joe (Arpaio) will be here when I run for re-election in 2014.”

And not only did Lewis take a lead role in the fight to preserve the Second Amendment, he stood in opposition to doing away with the death penalty as well. There’s a framed picture of Sarah Foxwell in his office to remind his deputies of why they do their job.

But Lewis saved most of his remarks for his defense of the Second Amendment. “We’re going to fight hard” against the gun bill, said Lewis, but if it passes “I will not allow any deputies to go into any law-abiding citizens’ houses (to confiscate guns),” Lewis promised.

This legislation will “do nothing” to stem crime in Maryland, Mike continued. It’s our “right, duty, and responsibility” to protect ourselves. Lewis also warned that the Obama administration is “trying to disarm Americans,” and vowed on Monday “we will show everyone the real Obama administration.”

After Delegate Addie Eckardt closed us out with a rendition of “God Bless America,” the formal portion of the event concluded and people had the chance to speak one-on-one with various attendees. I took some additional time to speak with my tablemates from Strategic Victory Consulting, who had come down for the day, and also further renewed acquaintances with my “partner in crime” Heather Olsen of Prince George’s County. (The below photo was taken by Dwight Patel.) 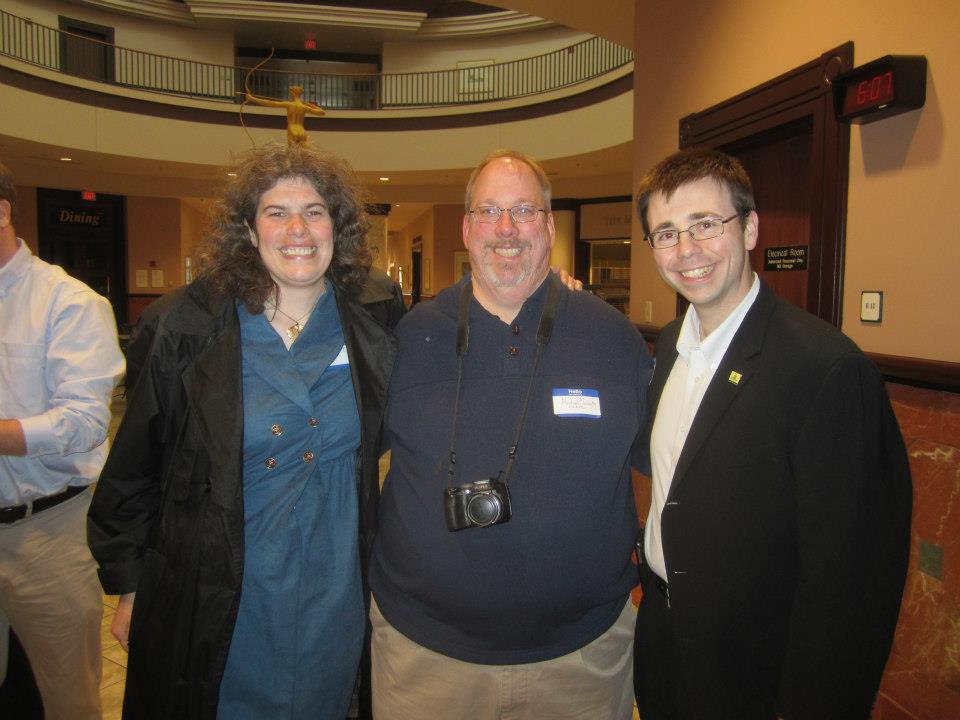 So the Maryland YRs were well-represented, too. It seemed like we had as many or more people from outside Wicomico County as we did locals.

Still, it was interesting to have the attention of the state party on our little corner of Maryland for a day. We may only make up 1/60 of the state in terms of population, but I daresay we make more than our share of political headlines and intrigue. Must be that thriving blogosphere.