The signs were pointing to a contentious night, but most of the anger was directed toward Annapolis and Washington. 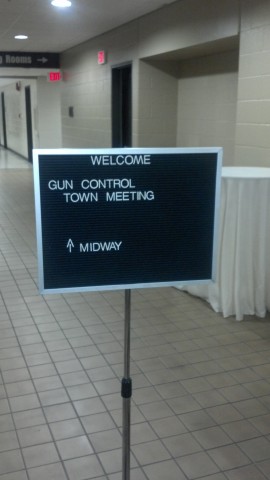 I will grant that I arrived a little late because we had a truncated Wicomico County Republican Club meeting – one which literally lasted five minutes, long enough to swear the new officers in – so I did not hear any introductions or opening remarks from event host and Wicomico County Sheriff Mike Lewis, who had a show of support from several other local sheriffs.

When I picked up on the proceedings, Congressman Andy Harris was speaking about the lack of NICS prosecutions at the federal level, with a particularly appalling lack of enforcement in Maryland. “States like Maryland will not enforce the law,” Harris charged. “Maryland is one of the worst states” in reporting mentally ill people to NICS.

“This is not about stopping Newtown,” Harris added. Instead, we should enforce the laws we have before adopting new ones. 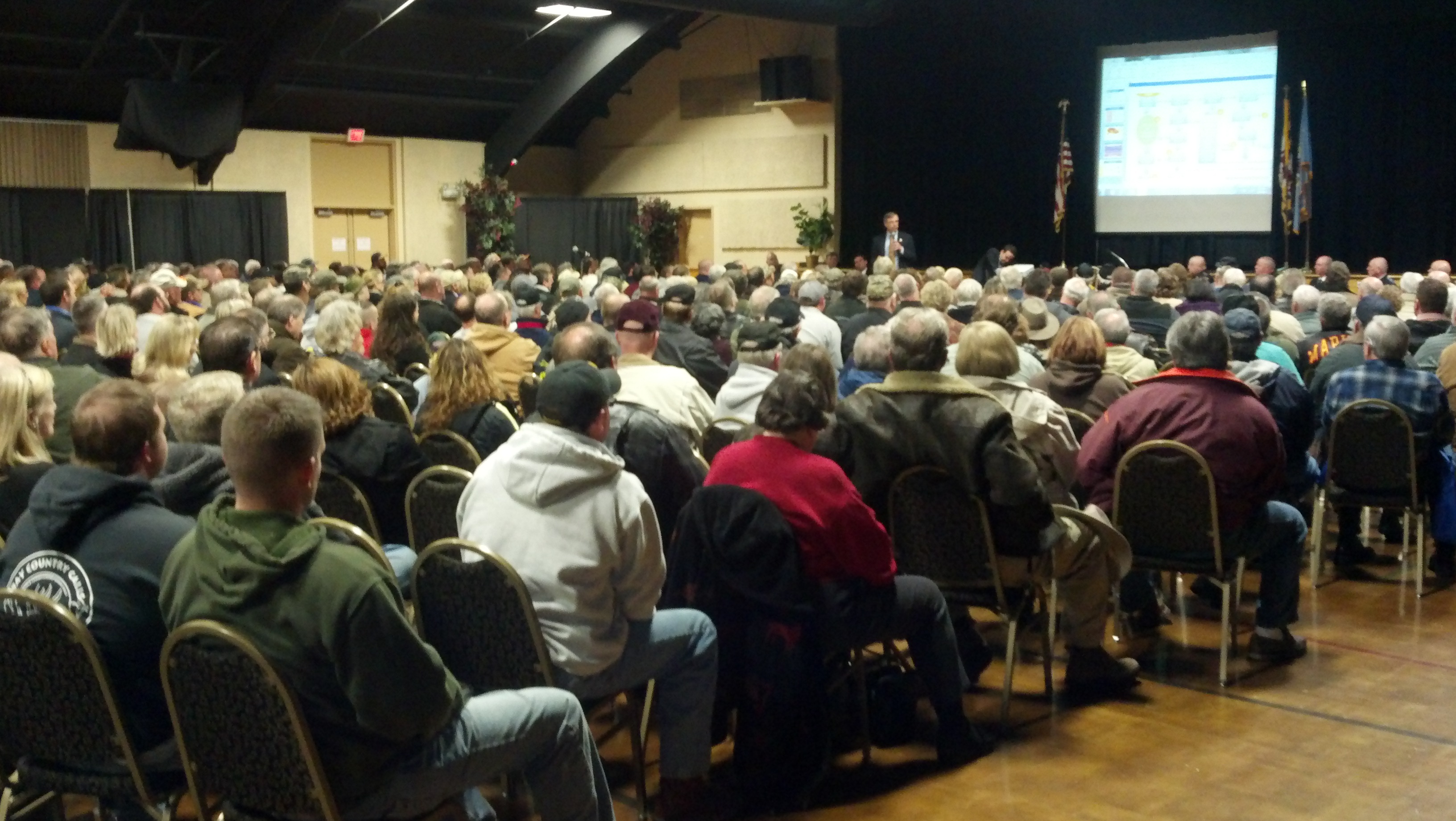 While Harris drew a very good response from the audience, it was no match for the reaction to always-outspoken Delegate Mike McDermott.

Senate Bill 281, he said, is “not redeemable…it needs to die on the vine.” McDermott added that “if it needed pulmonary resuscitation, I’d stomp on its chest.”

“This is about feeling like you’re doing something,” McDermott continued.

And while there have been “behind-the-scenes negotiations” on the “most intrusive” parts of the bill, the Delegate believed “this is the week to watch” regarding its fate. We still need a good display of public outrage every day the bill doesn’t advance, until April 8. He also noted the bill was assigned to two different House committees, a tactic occasionally used “to water down votes” of confirmed opponents who sit on a particular committee. Not only is the bill being heard in the Judiciary Committee McDermott serves on but it’s also been placed under the auspices of the Health and Government Operations Committee.

He also believed the bill sends “a mixed message” by creating criminals out of law-abiding citizens, and exhorted us to stand firm and make our voices heard.

Event host Lewis began by repeating his testimony on behalf of the Maryland Sheriffs’ Association on House Bill 294 (the crossfiled companion bill to Senate Bill 281 now being considered in the House.) He also repeated his oath of office, further pledging “we will fight for you to the end on this issue.”

“This is the right thing to do for the right reason,” Lewis added.

A representative from State Senator Jim Mathias’s office spoke on his behalf, saying he “sends his deep regrets” about not being able to attend due to the Senate session. While the statement contained his point about assisting with the abortive Senate filibuster of the gun bill and his hope that it would be defeated in the House, Mathias also swerved off-point a little by his boast about being “able to work across the aisle” on topics like the gas tax and death penalty repeal.

Wicomico County State’s Attorney Matt Maciarello made the case that “armed thugs in Salisbury don’t care about these laws.” He advocated for an armed deputy in each school to keep them from being “soft targets” and asked us to “hit the pause button on emotion.”

“If you want to protect yourself, the government shouldn’t stand in the way,” concluded Matt, who later called the event “a very cathartic night for me.”

While the opening remarks took around an hour, the bulk of the meeting – which lasted well over three hours – was taken by a number of citizens engaging in a question and answer session with the participants.

Right off the bat, questioners were accusatory in tone toward the state and federal government. “We need to cut (Governor O’Malley) short…he is dangerous,” the initial questioner said. On his mind was the most recent ammunition shortage, to which Congressman Harris responded “we’re not getting a good answer” on Congressional inquiries. He was trying to speak with various ammunition manufacturers to see whether the large government orders were curtailing general consumer availability.

Others were adamant about maintaining their rights in other ways. Here’s a selection of quotes from citizens I jotted down.

“Anyone who is naive enough to believe registration doesn’t lead to confiscation is out of their minds.”

“The issue has nothing to do with public safety…(it’s) subverting the Constitution.”

“Once the defensive weapons are gone, you can kiss everything else goodbye…the Second Amendment is our final reset button.”

Another questioned why we don’t adopt the Eddie Eagle program in our schools, with many speakers relating their early introduction to guns.

Yet schools held another manifestation of the problem. A thirty-year veteran teacher recalled the days when kids would come to her class prepared for hunting after school, including being armed with hunting knives inside the school and loaded weapons in their vehicles outside. Now, however, convicted felon juveniles given the choice between “school or prison” are in her classroom without her knowledge. Delegate McDermott chimed in to note he had drafted bills addressing this concern, bills which would have allowed armed school guardians (whether with weapons or tasers) and permitted off-duty officers to carry their guns on school property.

McDermott added his own dig at the gas tax as well, quipping we should use the new funds to “pay for the roadways leaving Maryland, because that’s where the congestion will be.”

There was one well-dressed gentleman who disagreed, believing assault weapons should be banned. However, he was “willing to compromise,” in part because “I don’t understand guns.” Lewis was among many who would be happy to make that introduction.

Matt Maciarello may have believed he would get away without some questioning, but I wondered, knowing that Lewis had pledged not to send his deputies on what he later termed a “suicide mission” at our Lincoln Day Dinner, whether Matt would refuse to prosecute anyone charged with violating the law. Obviously I put him on the spot because he couldn’t make such a blanket promise – I can understand the reasoning since all cases are different, and hopefully the question will be moot.

Another asked him about when civil disobedience was appropriate, which brought up another response Matt had to think about.

Well, Mike, if you plan on continuing to be my first and last line of defense against tyranny and supporting my right to keep and bear arms against the overreaching arm of the state, brother, you’ve got my vote. One less office for the local Republicans to worry about.

One disappointing aspect of the night, though, was how few local politicians attended. However, Salisbury City Council member Debbie Campbell came after the conclusion of the Council meeting and I was told County Councilman John Hall was also there. But that was it, and that’s really disheartening.

One thought on “2A townhall draws over 500 citizens”