Apparently it is all about turning out the base.

In their victory lap and appeal to flip the House, national Democrats cited the recent decision in Virginia to embrace cronyism in the persona of Terry McAuliffe as well as a number of big-city mayors such as Bill de Blasio in New York as evidence they have momentum. It’s the usual spin, considering they were whacked in New Jersey – a state with a Democratic voter registration advantage.

Yet look at the electorate which showed up in Virginia: 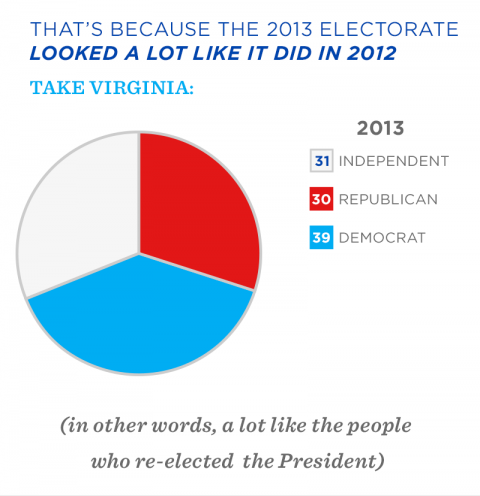 So McAuliffe, who won by less than two points, was elected by a D+9 turnout. Yet because Virginia is an open primary state and doesn’t make voters select a political party upon registration, this simply means self-declared Democrats were the largest of the three groups, with independents next and Republicans last. Those who declared themselves independent actually voted more for Ken Cuccinelli than for Terry McAuliffe, so where the GOP may have failed was getting their likely voters to the ballot. Many may be kicking themselves now because they believed the polls when they showed McAuliffe up by 10 points and didn’t turn out.

But the Democrats apparently believe that, because the 2013 model of turnout in Virginia turned out like the 2012 model, that the success will continue through 2014. They cling to this hope, as well as the polling data I wrote about a few weeks back where a generic Democrat leads in several Congressional races, in believing 2014 will be more of the same and they will get back the House to match the Senate.

The problem which their line of rainbow unicorn thinking is once you actually select a candidate the voters may not like his or her record or promises, particularly if they run on Obamacare. That, my friends, promises to be an albatross around the collective necks of the Democratic Party. Everyone who counters the lie we were told that “you can keep your insurance policy” is another potential Republican vote if done correctly in 2014 and 2016. Do you seriously think Hillary Clinton will change a thing about Obamacare when she had this bright idea two decades ago? She won’t. Yes, I realize the Democrats will try their best to change the subject and/or demonize Big Insurance, but they have a mess on their hands right now which goes far beyond a balky website.

Yet there is a lesson for us as well. I’ll grant this is a little bit of apples-to-oranges comparison because Virginia’s voters are self-declared, but if you had even a 35-34 Democratic turnout they would have never sent the e-mail because Ken Cuccinelli would be the incoming governor.

In one of our Republican Club meetings it was noted that Bob Ehrlich was elected with 68% Republican turnout. That simply won’t do. Martin O’Malley was re-elected with 1,044,961 votes in 2010, and even with 100% turnout and perfect GOP loyalty we are still almost 100,000 votes shy of that mark based on our current registration numbers. If we are going to win, we need to get that 20% of the Democrats who remain registered that way because their daddy was a Democrat to vote for us, and draw in independents, too.

Surely the opposition will paint us as extremists and try to play on voters’ emotions as they did in the Virginia race. But what’s so extreme about keeping more of your own money, presenting additional choices for the education of your children, and bringing the focus of government back to a local level? You tell me.

I refuse to believe the voters of Maryland will continue to vote against their own self-interest and will work accordingly to correct that. Education is a process which spans elections, but keep in mind we don’t have to convince everyone – if just one out of roughly former O’Malley voters switches to our side, we win. Given O’Malley’s tepid approval ratings it’s not such a daunting task, is it?

Time to get to work.

By the way, as an aside: it’s worth pointing out (as I was looking up the 2010 totals) that O’Malley won huge in two areas: early voting, where he received 62.9% of the vote, and absentee ballots, where he got 63.3%. But together they were only 18.1% of the total. Election Day is still important, but it won’t hurt to try and bank a lot of votes beforehand.

Calling the measure “arbitrary and capricious” and a violation of the separation of powers, a New York judge permanently enjoined the city of New York from carrying out their proposed soda ban, one day before it was to take effect.

New York Supreme Court Judge Milton Tingling tossed out the law, which was contested by a broad coalition of groups representing grocers, restaurants, theaters, and unions all affected by the proposed regulation.

Yet the law wasn’t necessarily denied on the idea of being an overly intrusive effort by the nanny state as evidenced by New York Mayor Michael Bloomberg’s willingness to police the size of sodas, but instead mainly as an exercise in the separation of powers. Had the City Council of New York passed the law instead of a Board of Health appointed by Mayor Bloomberg, and had the bill come out as a blanket prohibition instead of only applying to establishments under the purview of the Board of Health (as opposed to exempting grocery stores and the like) there’s a very real chance the law would have stood.

Michelle Minton of the Competitive Enterprise Institute has some of the same line of reasoning I do:

My first thought, of course, is “Sweet!” My second is that although it’s great a judge has recognized the error of Mayor Bloomberg’s ways, it shouldn’t take a court ruling for New York City residents to have the right to make their own decisions about how and when to consume goods like soda.

As I have said before, the constant onslaught of regulation that has been the hallmark of Mayor Bloomberg’s administration hurts New York’s economy. It favors large corporations over smaller businesses and hurts those with low incomes more than those with high incomes. More importantly, it raises some important questions about who has the right to choose what an individual consumes. As silly as the soda ban may seem, it forces us to consider: When do policies that ‘nudge’ us toward ‘healthier lifestyles’ become unacceptable intrusions into our lives?

If you substitute the phrase “Governor O’Malley” for “Mayor Bloomberg” and “Maryland” for “New York” you could say the exact same thing about our state. (There was a transfats prohibition bill introduced and heard this session in the General Assembly, so we’re not that far behind.)

In my lifetime, we have seen the government take a number of steps to reduce freedom in the name of safety: smoking bans which began on airplanes then expanded to portions of restaurants and eventually practically all public places, seat belt laws which were originally up to each state until Uncle Sam started to threaten highway money if states didn’t fall in line (the same was true with lowering allowable blood alcohol levels), and even the banning of the sale of  raw milk. Are we really better off with all these intrusions? Where is the line in the sand where the public will say stop?

Perhaps it was the Big Gulp which captured public awareness, but I suppose better late than never is the word here. But there are so many intrusions which go hardly noticed that it’s only the most brazen prohibitions which attract attention – meanwhile, your freedom to develop your land as you wish or raise your child as you see fit continues to be threatened.