Yesterday Maryland wallets got a little bit lighter as travelers over most of Maryland’s tollways had to dig a little deeper into their wallets, and those motorists unfortunate enough to need to fill up their gas tanks chipped in another forty cents or so to the state’s coffers. (My travels take me to Delaware today – guess where I’ll fill up?) And those with property in nine of Maryland’s counties? They just saw a significant property tax increase. (The exceptions are the fourteen rural counties not yet covered by the state’s new “impervious surface fee” derisively known as the “rain tax” and those property owners in Frederick County who will pay exactly one penny per piece of property.)

Needless to say, a number of state Republicans weighed in on the topic:

State GOP Chair Diana Waterman: “This irresponsible taxation and the reckless spending it supports offers an opportunity for those of us who believe in good government. As Republicans, we are in a great position to remind our fellow Maryland residents why 2014 must be the year we send a loud message to the Democrats that it’s time to put people first.”

Maryland Young Republican Chair Brian Griffiths: “These taxes will hurt all Marylanders and huge sections of our economy as businesses are forced to raise prices to cover the costs of these new taxes, the costs of which will invariably be passed on to the consumers. At the end of the day, just these three tax increases will likely cost each Marylander over $1,000 a year that could be better spent to stimulate our economy and create job growth.”

Several other state Republican leaders were quoted on the Maryland Politics blog, part of the Baltimore Sun. Writer Michael Dresser quoted the group as calling this a “virtual downpour” of tax increases.

Candidates for Governor weren’t missing the opportunity, either.

David Craig: “(W)e are witnessing yet another example of how the one-party monopoly in Annapolis is working for itself and not for you. With the increase in tolls and the first of multiple increases in the gas tax, Maryland families are being forced to give more of their hard earned dollars to a failing and ineffective government.”

Craig also put together a brief video with a similar message. (Shouldn’t it have an authority line, though?)

On the rain tax, David added, “Stormwater-related costs necessary to comply with EPA mandates are projected to cost county taxpayers a staggering $6.3 billion through 2025. If you wanted to open a business with a parking lot, would you want to come to Maryland and figure out this new tax?”

Ron George: “O’Malley/Brown now are stealing from your summer vacation funds. Since they robbed and misspent what was needed for transportation, they are now grabbing your money through tolls, rain and gas. As you look at the bay bridge behind me, it is an example of what is happening around Maryland. More and more people on the Eastern Shore, which has lost manufacturing jobs, have to drive to Washington and Virginia for a job, if they have a job. Less and less people on the Western shore will drive to doctors and businesses on the Eastern Shore.”

“This is not how you build an economy.”

Charles Lollar: “To think that just a few weeks ago, Lieutenant Governor Anthony Brown stated that Maryland had a ‘great session’ makes me wonder what great accomplishment they had. Was it the Rain Tax that punishes citizens when it rains because of how much ‘impervious surface’ they have on their property? Was it the fee increase for tolls up to $6? Or was it the gas tax increase that pretty much goes up year after year?”

Even though he’s not a candidate, it’s no surprise that Change Maryland had some reaction as well.

Larry Hogan: “Your family trip to the beach just got a lot more expensive. Today, the second round of O’Malley toll increases took effect and the gas tax increase kicked in at the same time. While you are sitting in traffic at the Bay Bridge for the 4th of July weekend you can thank Governor O’Malley and the monopoly in Annapolis for the 140% increase in tolls, and for giving us the most expensive gas in the region.”

Needless to say, our governor didn’t look at it this way, placing a splashy graphic on his Facebook page: 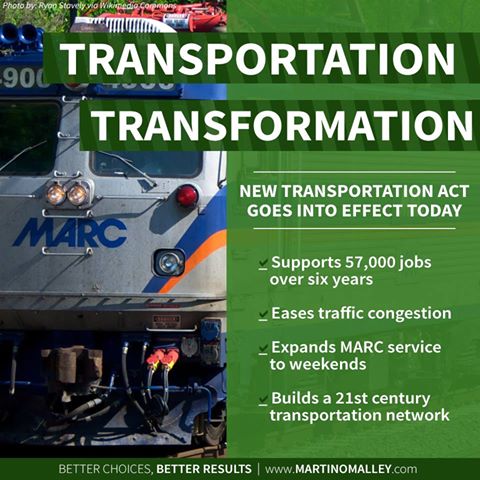 These, of course, are numbers coming from the same guy who has “cut” billions in state spending yet whose budget has increased by 30% since taking office in 2007. At 9,500 jobs a year, he’s barely making a dent in Maryland’s chronic unemployment, nor is he accounting for the potential of job losses in various industries dependent on people having extra money, such as tourism. Just as a real-world example, it would take just over 22 years for O’Malley to get to full employment gaining 9,500 jobs a year (based on the Bureau of Labor Statistics unemployment estimate of 210,800 unemployed Maryland workers in May.) Obviously that doesn’t account for population growth, either.

But what slays me is the concept of building a “21st century transportation network” using the 19th century technology of the railroad. Granted, rail transport has its place in commerce and trade, but as currently practiced it is woefully inefficient for the needs of most commuters. (If it weren’t inefficient on an overall scale, why are such a small percentage of Maryland workers using it?) I think my concept of an improved transportation network – which could also include a widening of I-70 beyond Frederick, to avoid the usual bottleneck of merging I-270 traffic and allow smoother flow westward – is far more practical than the O’Malley/Brown vision.

The idea of a good transportation network is to get people and goods to where they need to go, not pretend that a light rail boondoggle which will cost billions is the panacea. I don’t think people would mind the additional transportation taxes and tolls as much if they were confident the money would be used to repair and improve our highways and bridges – instead, most of it seems to be earmarked for two rail lines and one toll road few will use.

Similarly, we all want a cleaner Chesapeake Bay, but the idea of a mandate from on high which affects some more than others and is to be used for a concept where fruition is a constantly-shifting set of goalposts (because it’s in the best interest for those who created the benchmarks to continue as a political entity if the problem is never solved) simply seems unfair to those saddled with paying this fee on top of their remaining tax burden.

That’s why we’re angry. But Democrats are wagering that all this will be forgotten in 17 months’ time, particularly as some of these transportation projects reach the groundbreaking stage, with its requisite photo-op.

But consider the relative lightness of your wallet when you see your local Democrat gladhanding at this photo-op. If we simply used proper prioritization for transportation funding, we wouldn’t have needed to raise the gas tax every year from here to eternity.