As usual, the collection of oddities and things I run across which merit a paragraph, two, or three. Once I figure I’m up to 600 words or so I decide it’s time to add another chapter to this long-running series.

So let me begin with the shrill diatribes of one Pat McDonough. I’m going to pick out two paragraphs from a release he put out today.

The President’s fiat providing amnesty rights to illegal aliens by allowing them to acquire work permits circumvents the Congress and violates the Constitution and the Federal Immigration Act.  This political stunt initiated in an election year cries out for immediate impeachment hearings and a preventive federal lawsuit. Congressman Steven King of Iowa, the Chairman of the Immigration Reform Committee, has announced that he will launch a federal lawsuit to stop Obama’s reckless executive order.

From a practical point of view, the President’s actions will seriously hurt American workers. Twenty-four million people are underemployed in this nation and 43% of the unemployed have been collecting benefits for more than 6 months.  With a stroke of a pen, Mr. Obama has generated 1.5 million new work permits to people who are in our country without lawful presence.  The result is 1.5 million jobs will be stolen from Americans.  This illegal action is designed to promote his re-election at a time when we are suffering a “jobs depression” which he has been unable to resolve are unbelievable.

Pat is mostly correct in what he says, but it seems to me the message needs to come from other venues as well. After all, when the first thing out of Pat’s mouth in the wake of Obama’s Friday announcement was a call for his impeachment – a wish that stands less than zero chance of happening in this political climate – it makes McDonough look too much like an opportunist. Never mind he’s toyed with the idea of running for several offices before keeping the one he has.

On the other hand, I get more of a impression of sanity with Larry Hogan and Change Maryland. Referring to budget trends among the states based on data from the National Governor’s Association, he also managed a swipe at the outgoing incumbent:

“What happens when you increase spending by more than most other states and you pass 24 tax and fee hikes? You end up having the biggest job loss in the nation,” said Change Maryland Chairman Larry Hogan, referring to the latest U.S. Department of Labor report which showed Maryland leading the nation in lost jobs.

Now I will grant that Hogan was also in and out of a electoral race, bowing out midstream in favor of Bob Ehrlich in the 2010 gubernatorial race, but he’s not cultivated a reputation for bombast like McDonough has. There are ways of selling one’s self which are more effective than others and Hogan seems to have that knack.

“The (Workgroup to Consider Gaming Expansion) is operating in the privacy of a windowless, third floor conference room in the Lowe House Office Building without a single member of the public present. If this isn’t a sad example of the proverbial ‘smoky back room,’ I don’t know what is.” said Pipkin. Earlier Monday morning, a Pipkin staffer was barred from the Workgroup’s meeting.

“Behind closed doors, and out public sight, this group is crafting policy,” said Pipkin. “Maryland’s emerging casino gaming industry will soon be pumping millions into the state’s coffers, and now the workgroup is cutting deals in private. Members of the public who wish to attend these meetings should not be barred. Obviously the O’Malley administration has no interest in a transparent process or open governance.”

“They are pulling every political trick of the trade to ram through a sixth casino location in Prince George’s county and table games at all six casinos.  The Governor’s staff operates like a crew of barroom bouncers guarding the door and refusing public access to these secret meetings.”

Bear in mind that the eleven-member group was selected by three politicians: Governor O’Malley, Senate President Thomas V. Mike Miller Jr., and House Speaker Michael Busch, all Democrats. So imagine if a Republican had such secretive meetings – it would set off a firestorm of withering criticism from the press. Instead, it’s left to Pipkin to make his statement while the workgroup hammers out a bill for a July Special Session.

If you’ve been following the Dan Bongino campaign as I have, you probably know he did a money bomb last week, raising  nearly $15,000 according to this Gazette article. While the paper correctly notes that Ben Cardin has a huge cash advantage at this date, it’s also worth stating that Bongino’s $60 or so average contribution is peanuts compared to the thousands of special interest dollars Cardin seems to have at his beck and call. Just as one example, it’s interesting how much attention has been paid to our Eastern Shore postal distribution center since the letter carriers’ union and postmasters forked over $10,000 to “our friend Ben’s” campaign coffers – and that’s just since the beginning of 2011.

I have no problem with money in politics, but it’s amazing to me where all Ben’s money comes from. 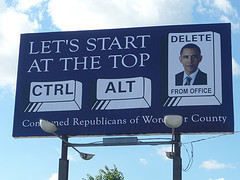 Speaking of money, the Worcester County Republicans raised enough, through a number of means, to at least make one of their planned two billboards a reality. I’m told by Don Stifler, who sent along this photo to me, that the sign is located just north of the Virginia line along U.S. 13, so I’ll have to look for it in my upcoming travels down that way.

Honestly, though, I’m not sure the sign isn’t too clever by half in its reference. There’s no question we need to get rid of Obama, but I think there could have been a better message. Regardless, the sign is what it is and I’m sure some people will tell me that it’s a perfect analogy – to each his or her own, I guess.

I’m going to close with a riddle – what do Afghanistan and Mexico have in common?

You probably know from a previous article that my blogging friend Bob McCarty is trying to raise funds to help him launch his upcoming book. But he raises some good questions about the similarities between events in Mexico and “green on blue” attacks in Afghanistan that bear closer examination – not that much of it is forthcoming from those who can address the issue. And in both cases, people are winding up dead.

Meanwhile, Bob is about 1/6 of the way to his goal. No doubt a lot of people want money these days, but if the subject seems interesting perhaps you can help Bob out. (You can even rattle my tip jar, too.)

So there you have it, as I actually went way beyond my 600-word barrier, even though I counted the blockquotes. I wrote a lot nonetheless, so I hope you learned at least as much as I did.