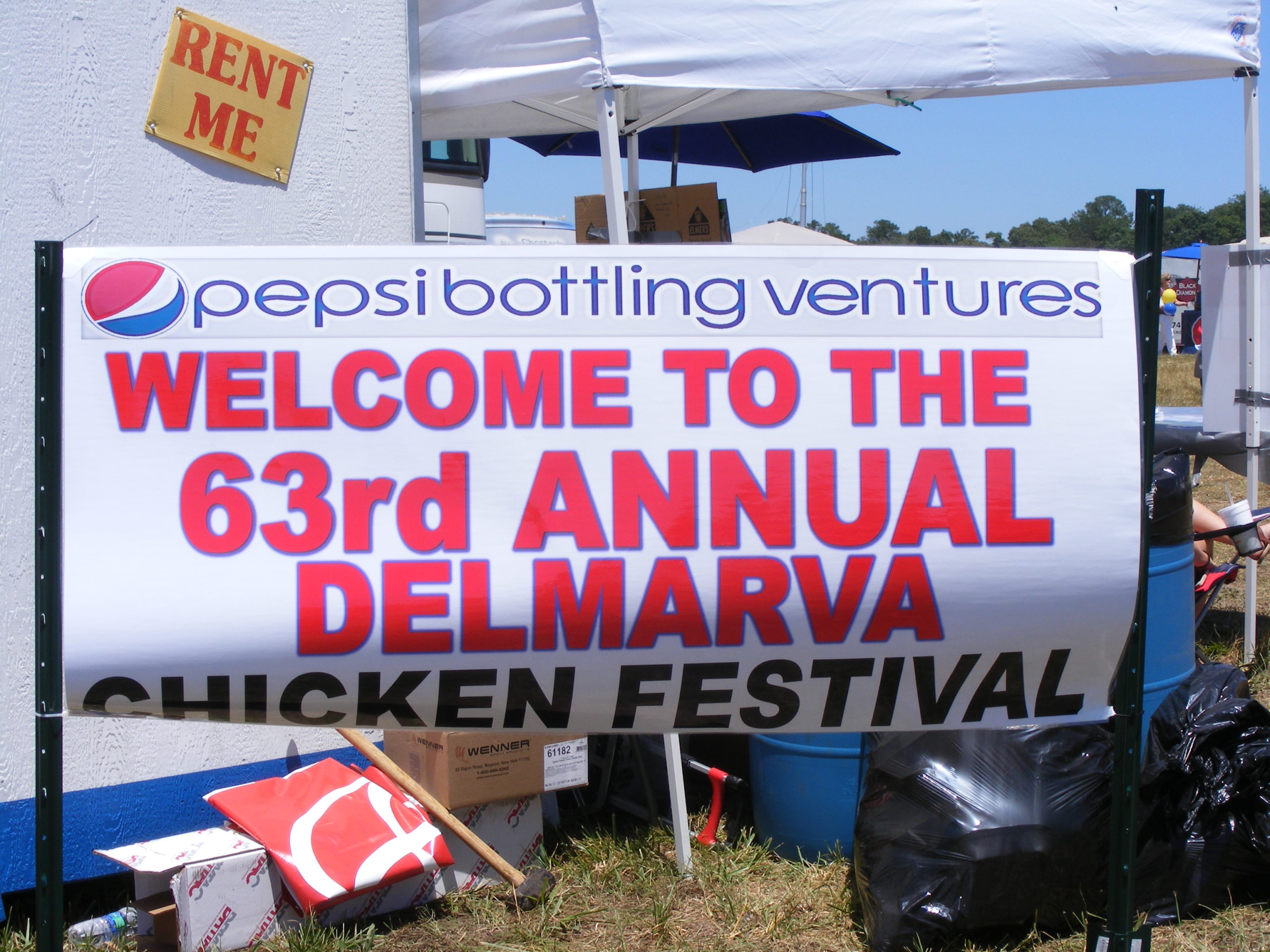 We welcomed the event back to Salisbury after a four-year absence – oddly enough, it seems to come here during a Presidential election year. As I promised, here’s my accounting of the event.

If you’re wondering why I was there, well, as part of my Central Committee duties I coordinate our presence at particular events. They understand it’s a win-win situation as I help get the people there for their purposes and I have an excuse to roam around for mine. This was taken early on Friday with the first of my volunteers, Tom Hughes, manning the tent. 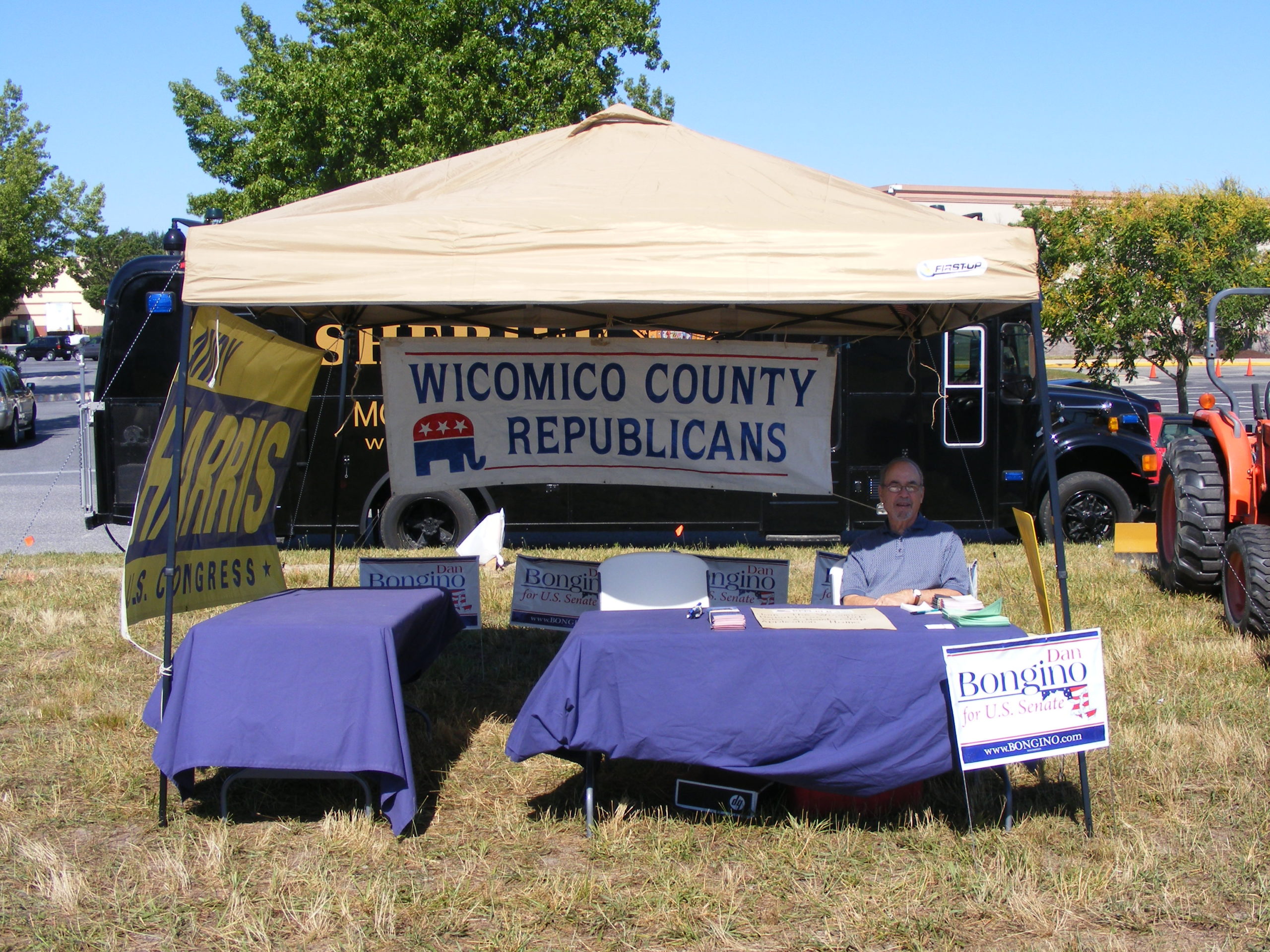 Tom (and many others) were kind enough to mind the store while I did my thing, particularly at the opening ceremony. It’s interesting that not one of these birds is really a chicken. 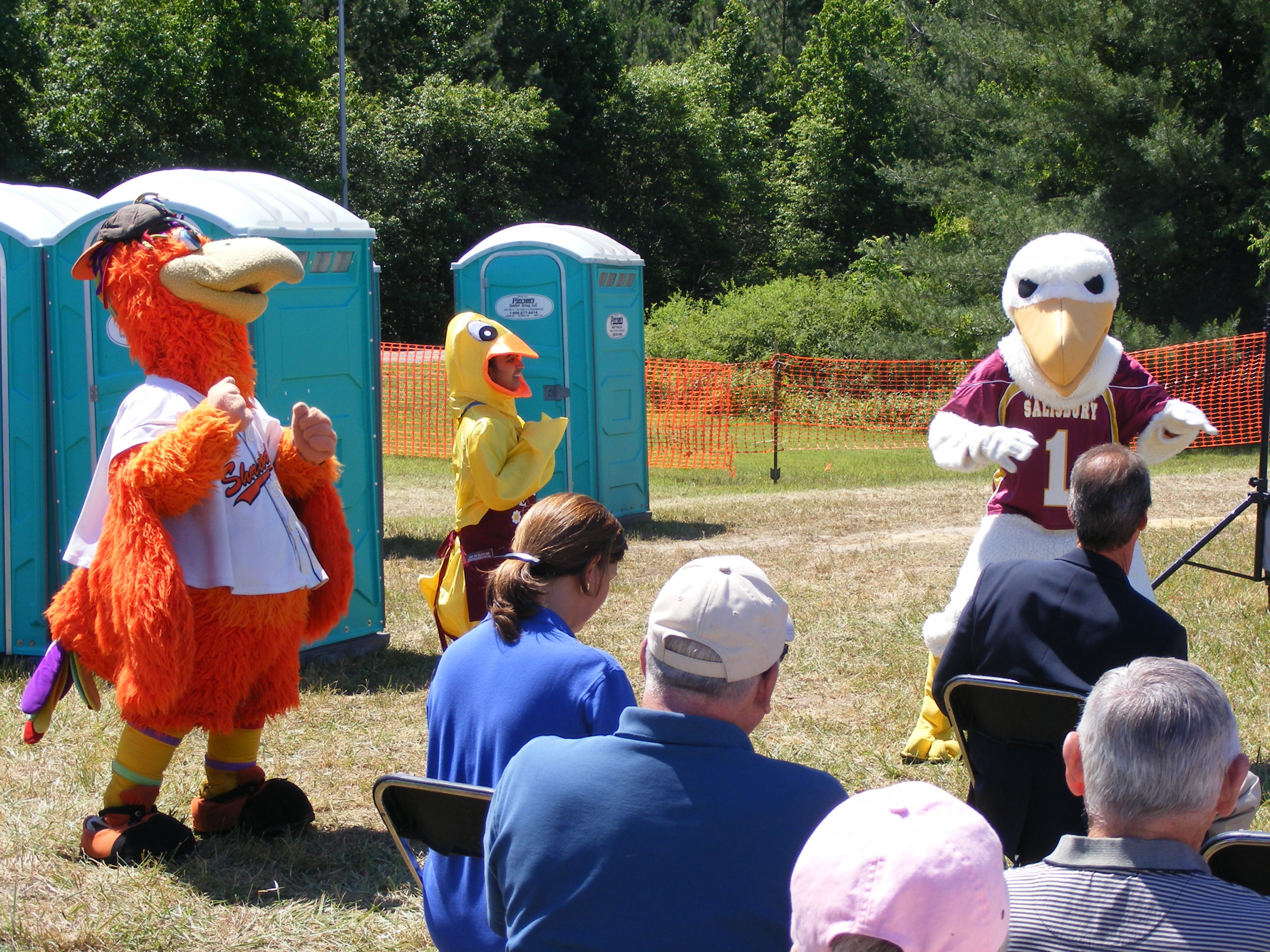 I talked about the politicians and their speeches yesterday, but I didn’t see any of the Maryland folks doing the chicken dance, did I? 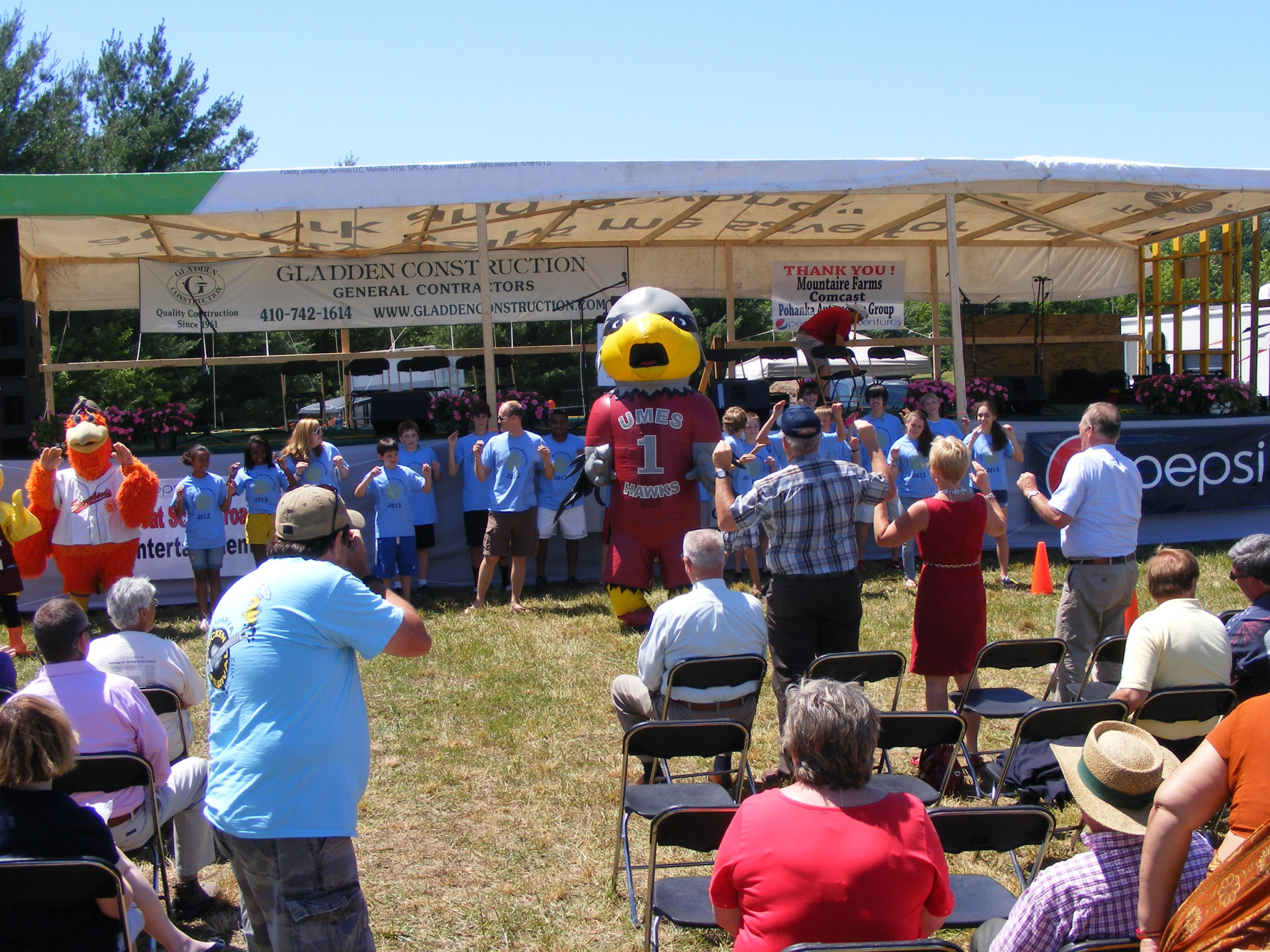 I think some of those on the right-hand side of the photo (with their backs to the camera) were Delaware state legislators, though, so they weren’t as bashful.

The political types were quick to grab a piece of the ribbon, though, and officially kick off the 63rd Delmarva Chicken Festival. 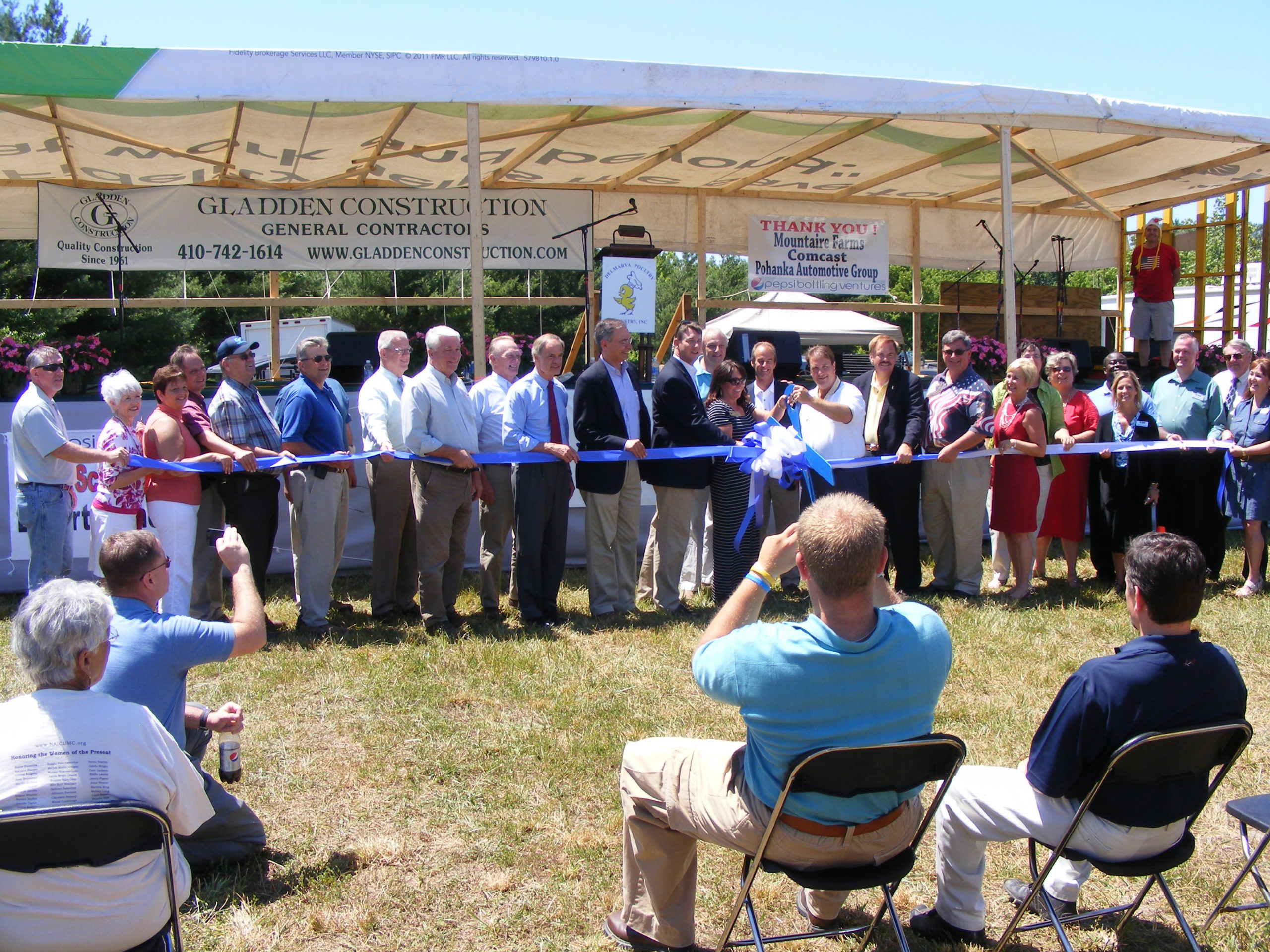 One thing the DCF attempts to accomplish is educate those who are city slickers about the chicken cycle of life. First you have the incubator to help the newly hatched come into the world. 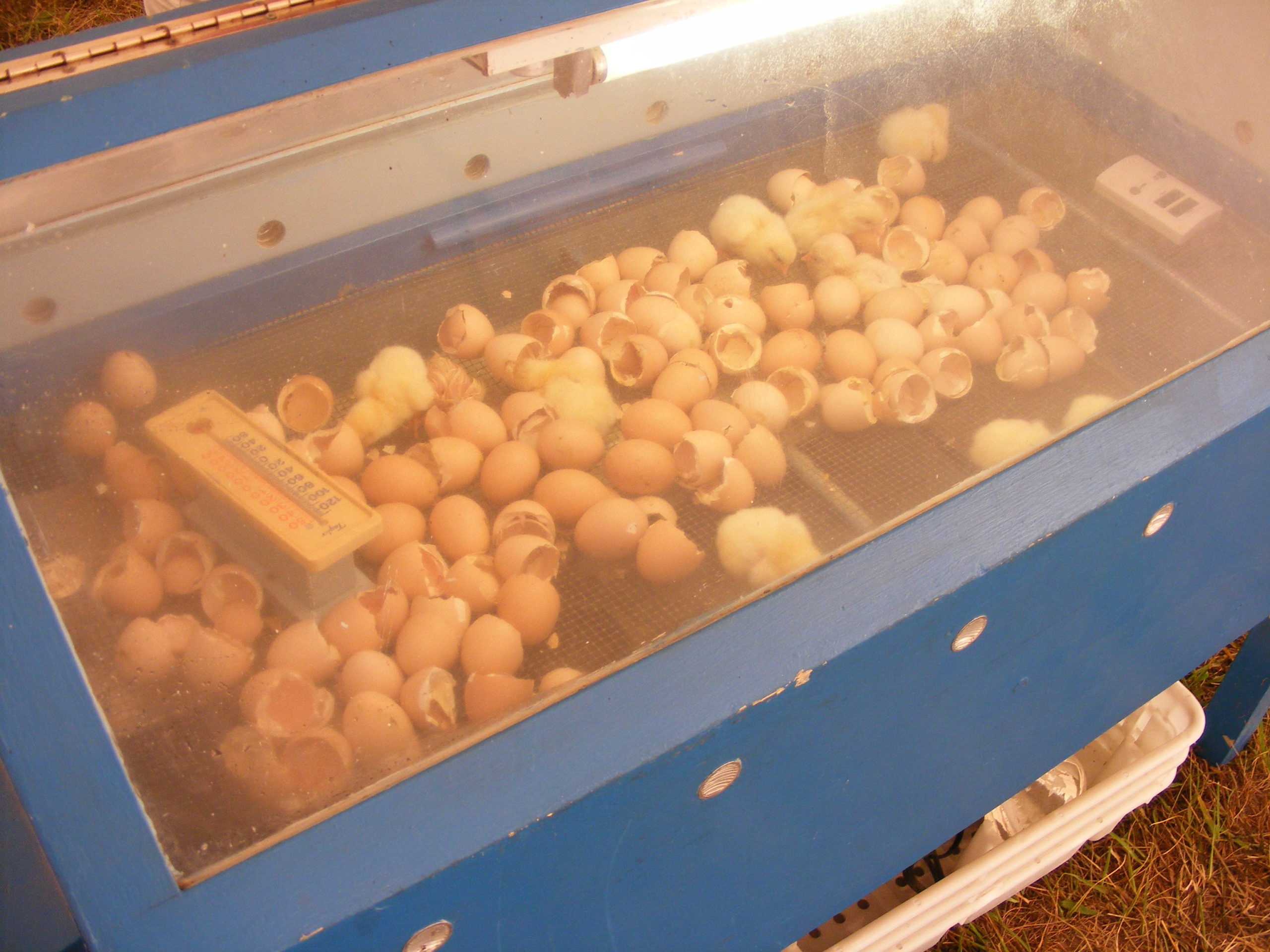 Then it’s perhaps the favorite part of the DCF in terms of the “awwwwwww” factor. These are the definition of “harmless lovable little fuzzballs.” 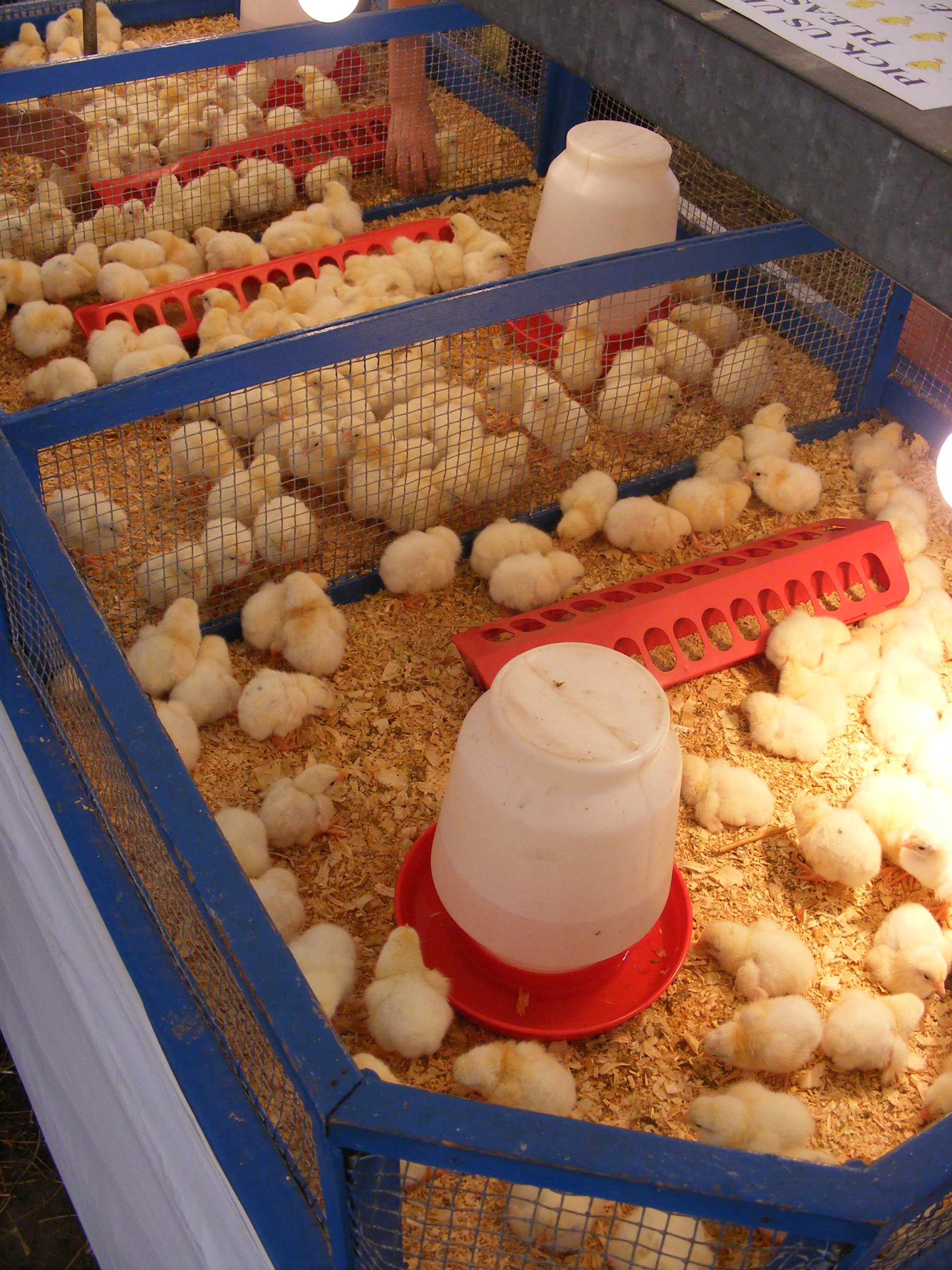 But then they grow to be decent-sized birds. 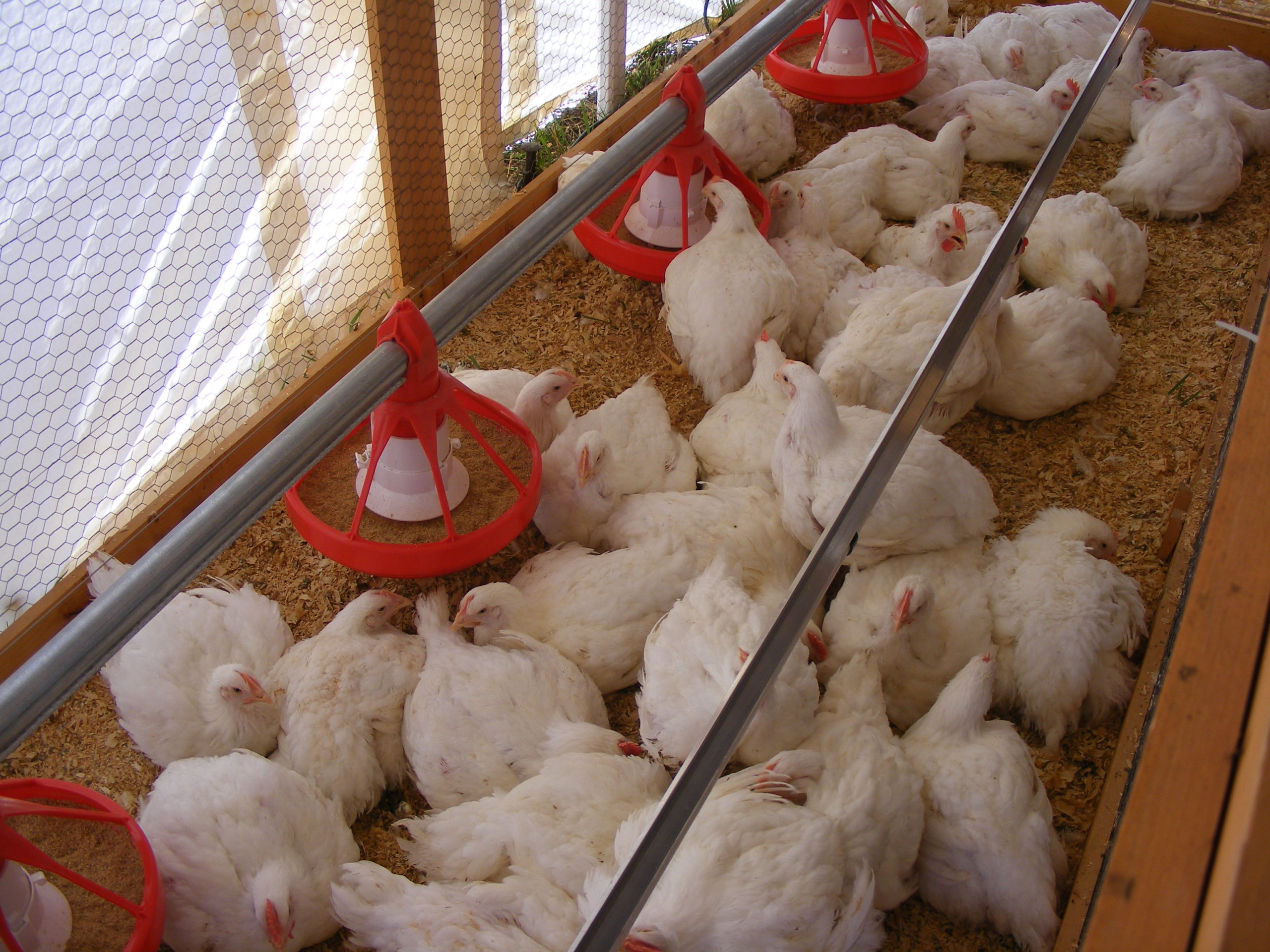 Fortunately, they don’t feature the chickens’ actual demise, but they come to what may be considered a glorious end in one of several ways. Some are barbecued to perfection. 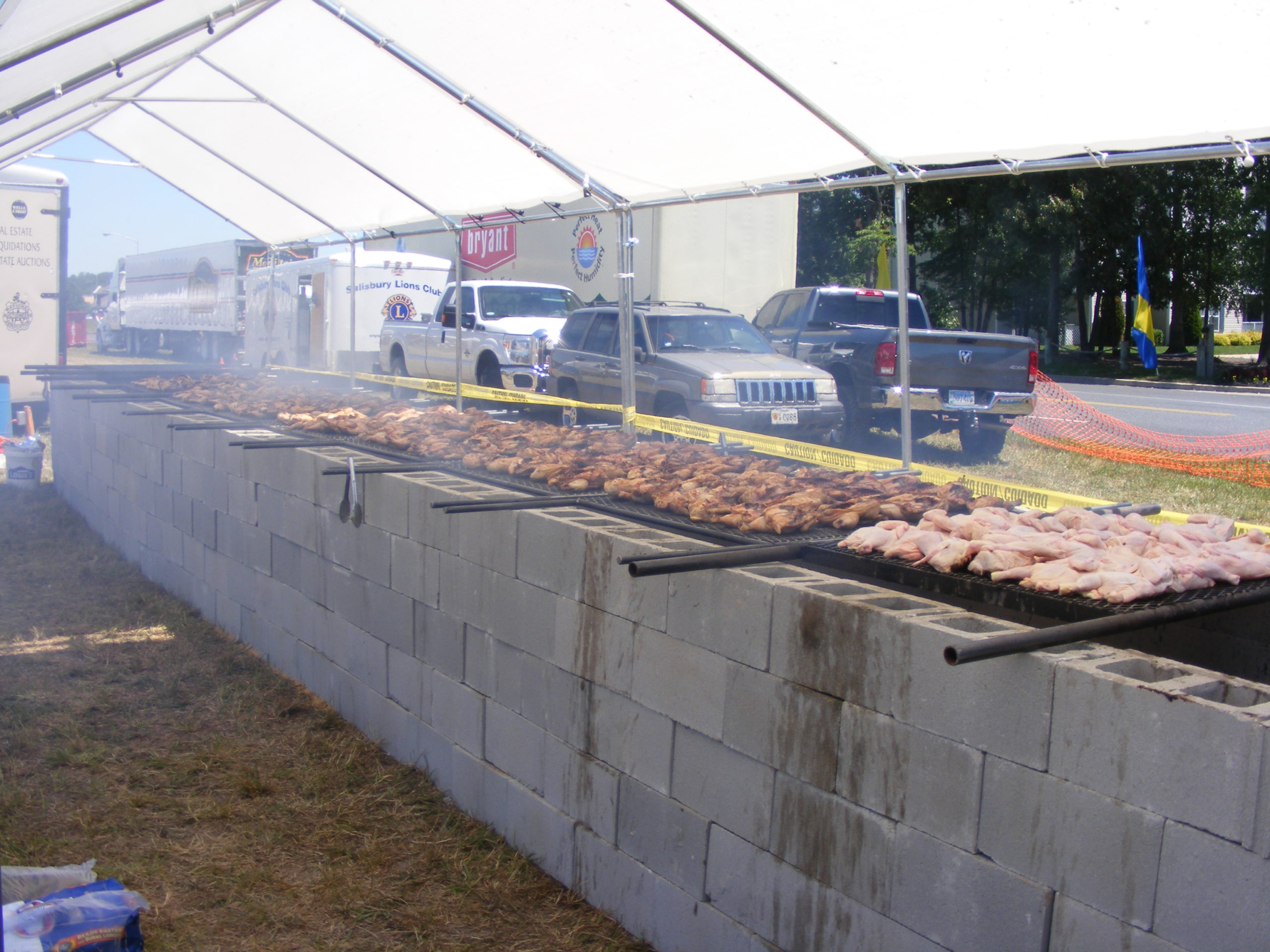 Others are fried in the giant frying pan. For the curious, some of the facts and figures about this behemoth are below. 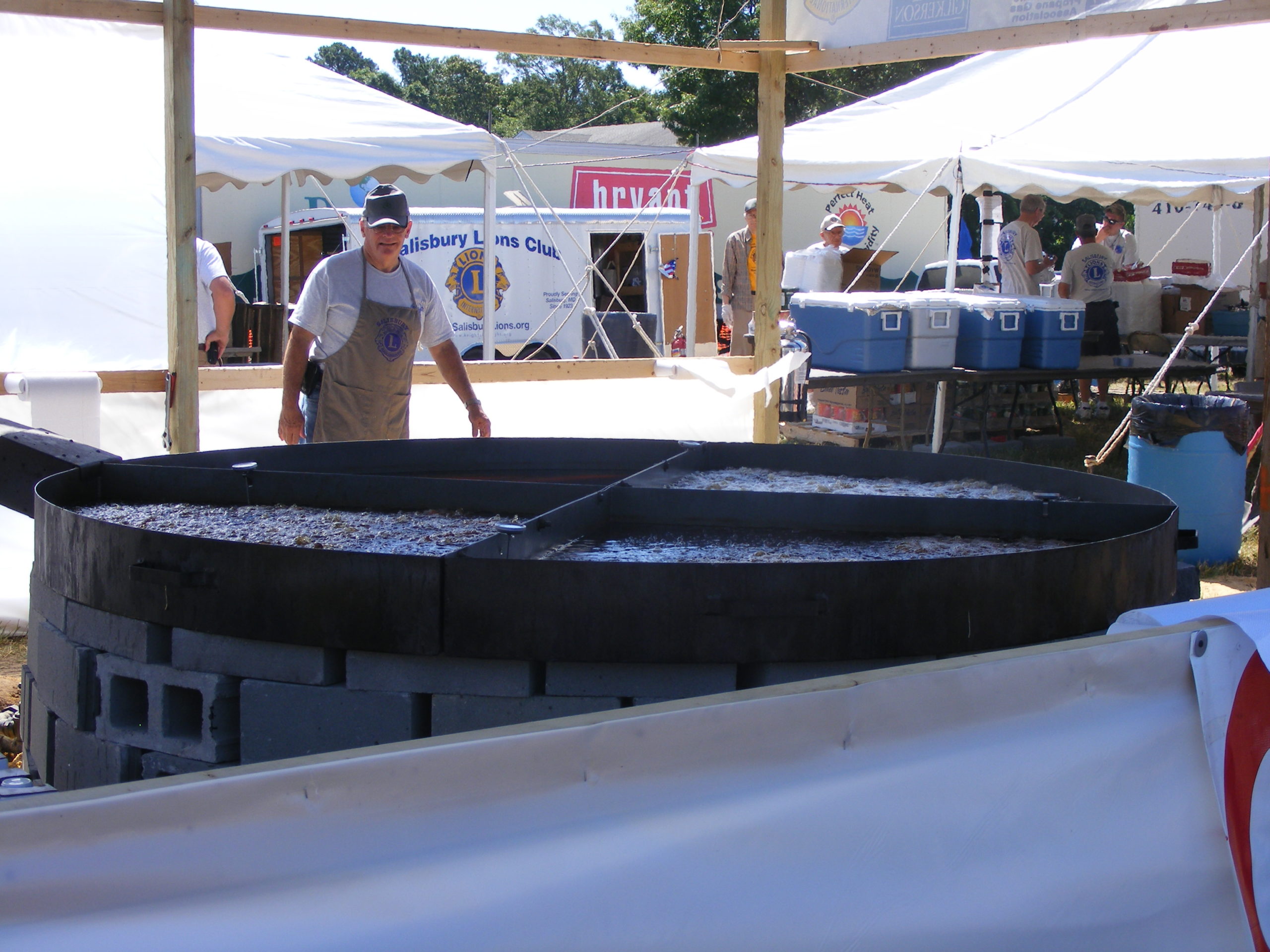 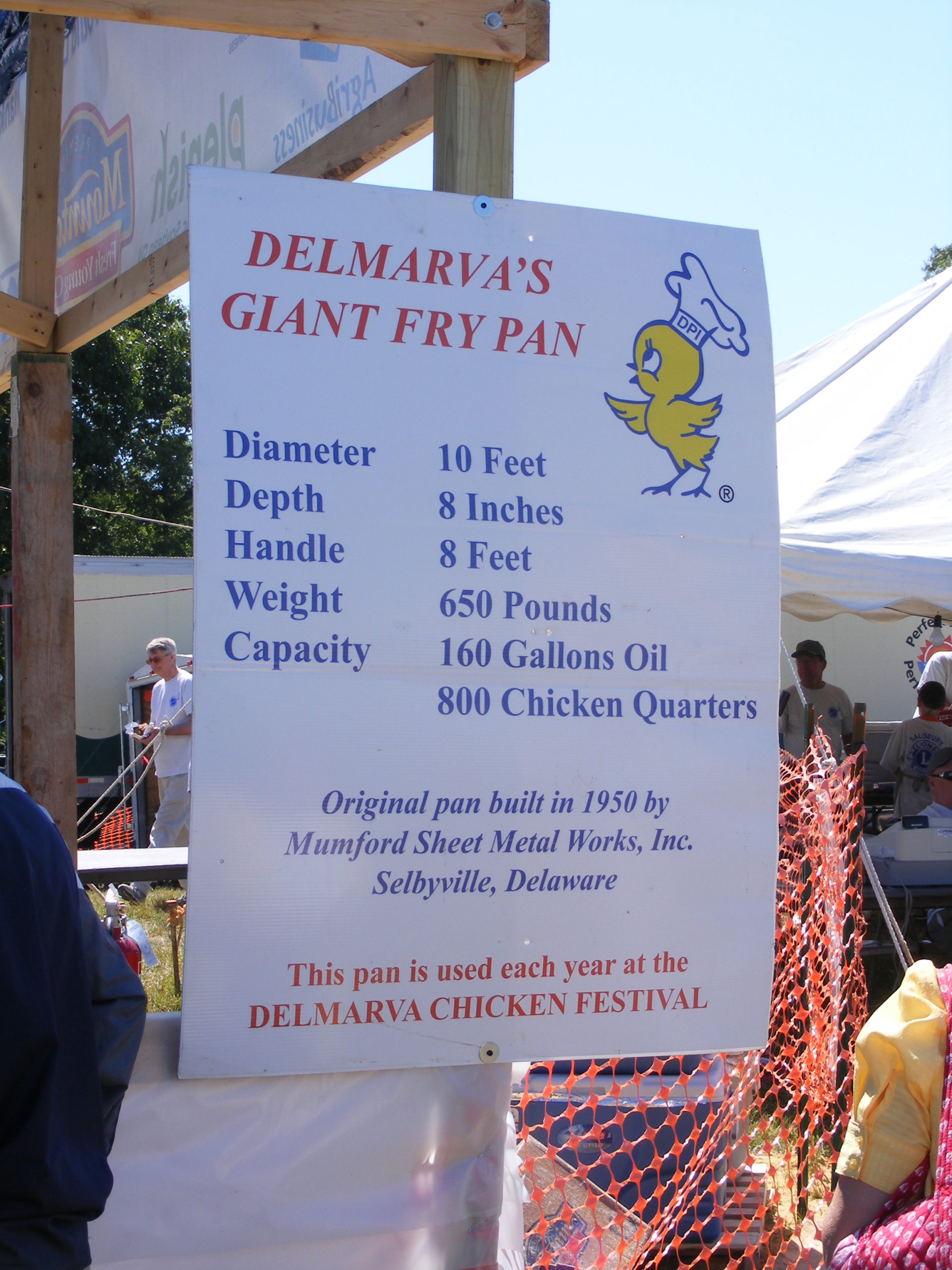 Still others are picked apart for cash prizes. Mountaire, which provides the chicken, also put up the money to the winners. 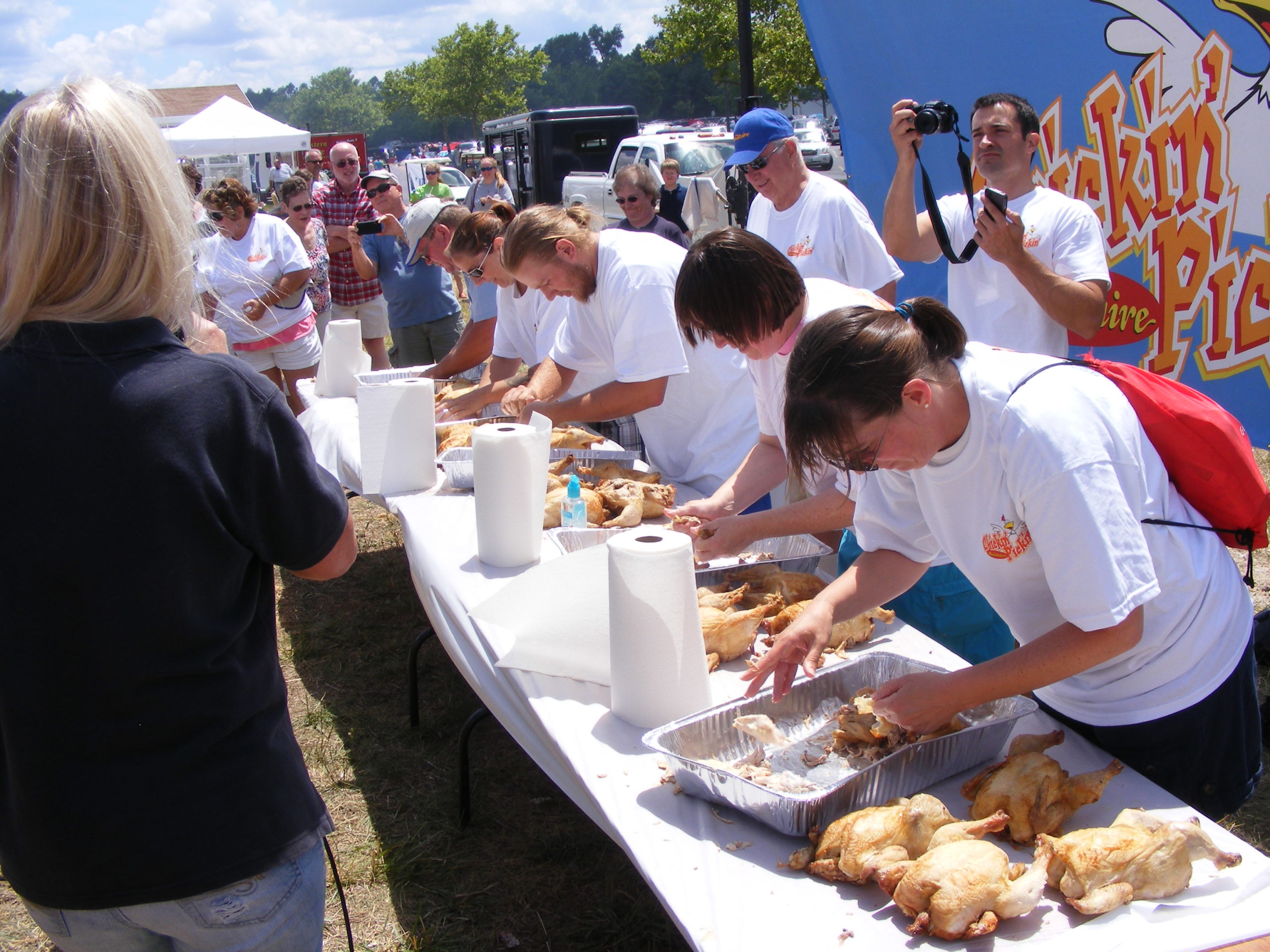 I found it interesting that the meat picked from the chickens goes to a local cat shelter. I gather that’s because of the non-sterile conditions the meat is prepared under, because there are no gloves on those hands.

The Chickin Pickin’ was one of many side events that went on, along with a full entertainment schedule and a car show on Saturday. 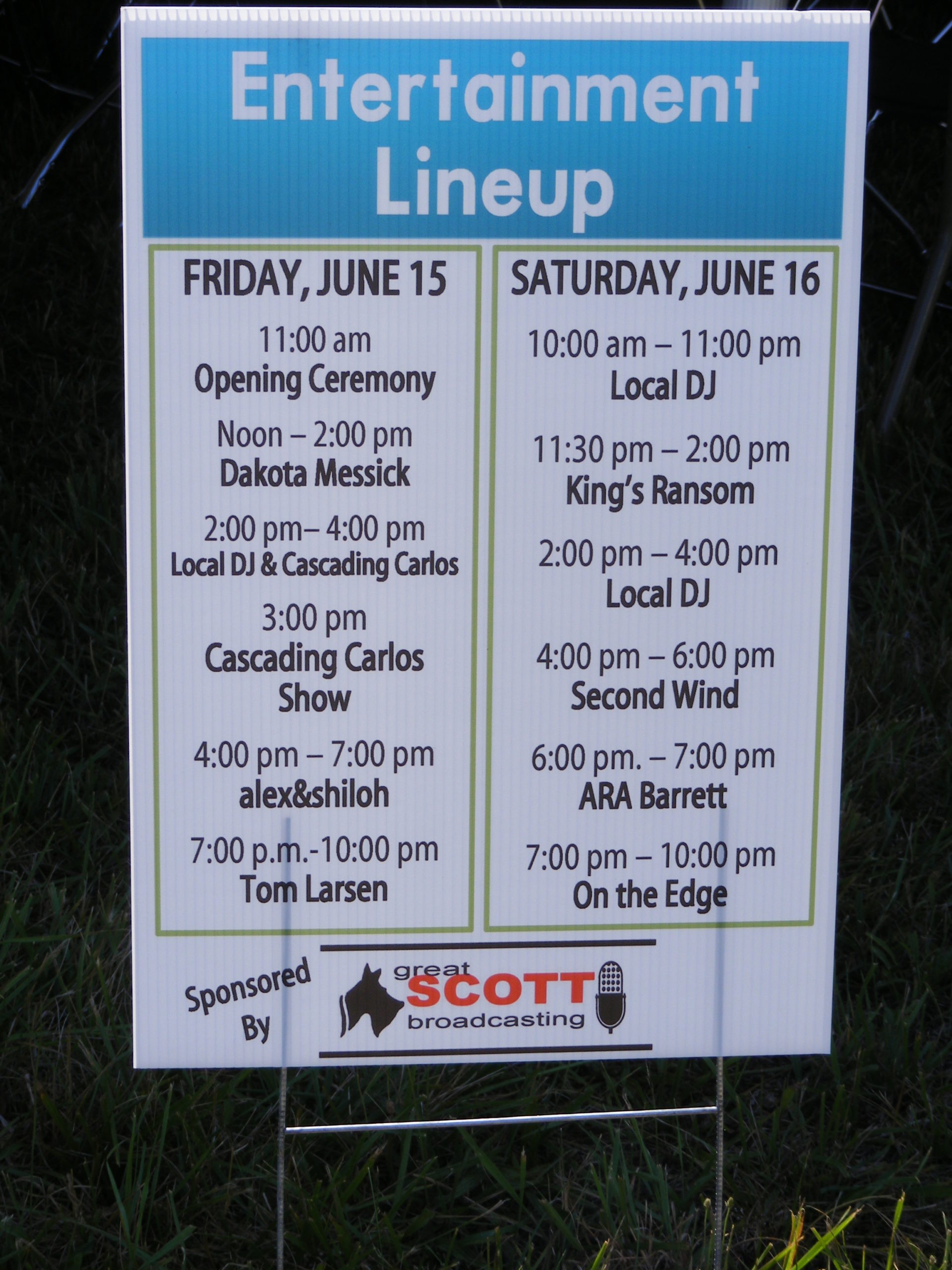 Whether it was to our benefit or not, our booth location was well away from the stage so we really didn’t get to hear the bands like alex&shiloh, pictured below. So, alas, I’ll have no Weekend of Local Rock post from this. 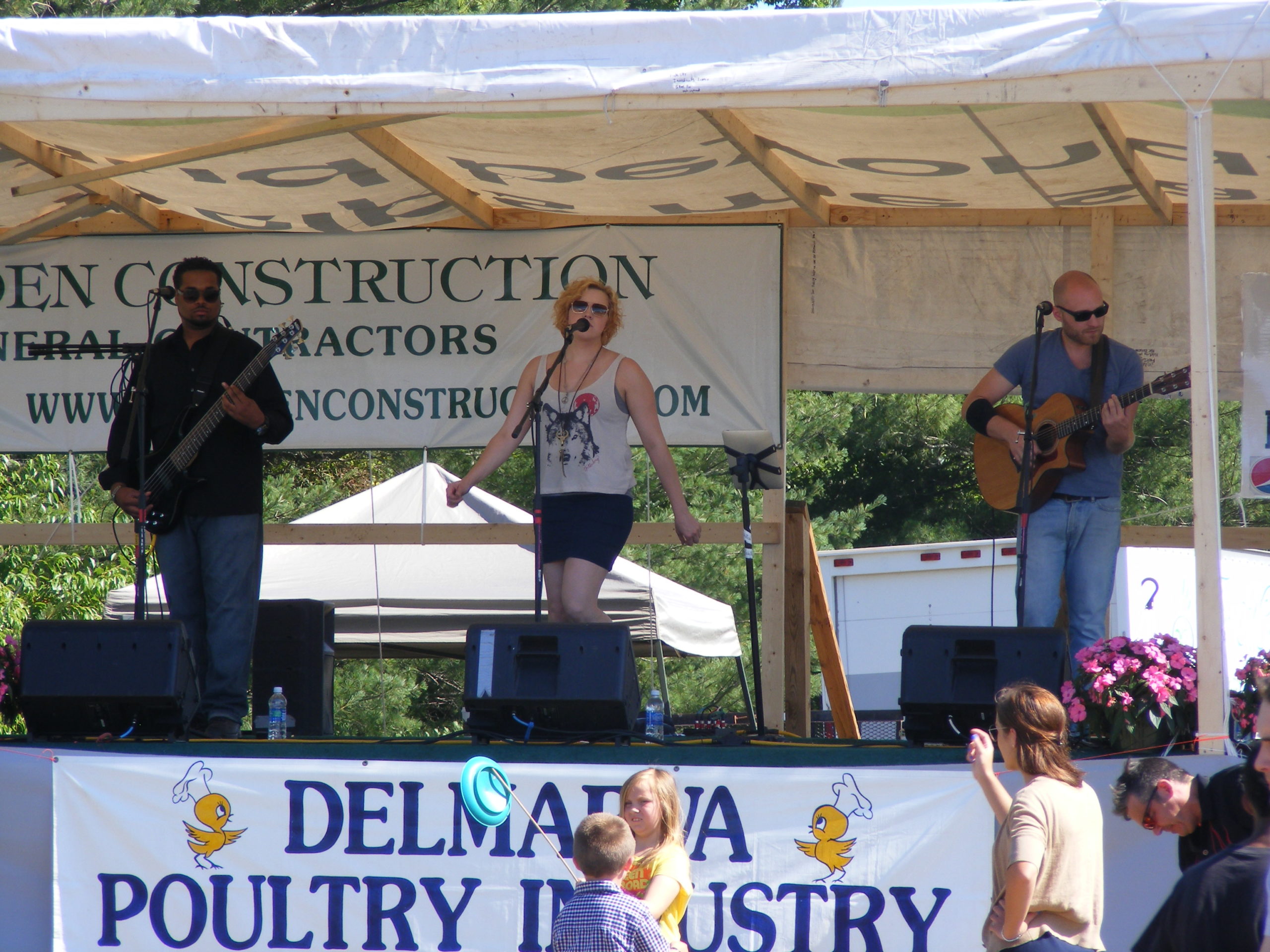 As I mentioned, there was a car show and I am definitely a sucker for car shows. But I don’t hold a candle to this owner’s love for The King of Rock n’ Roll. 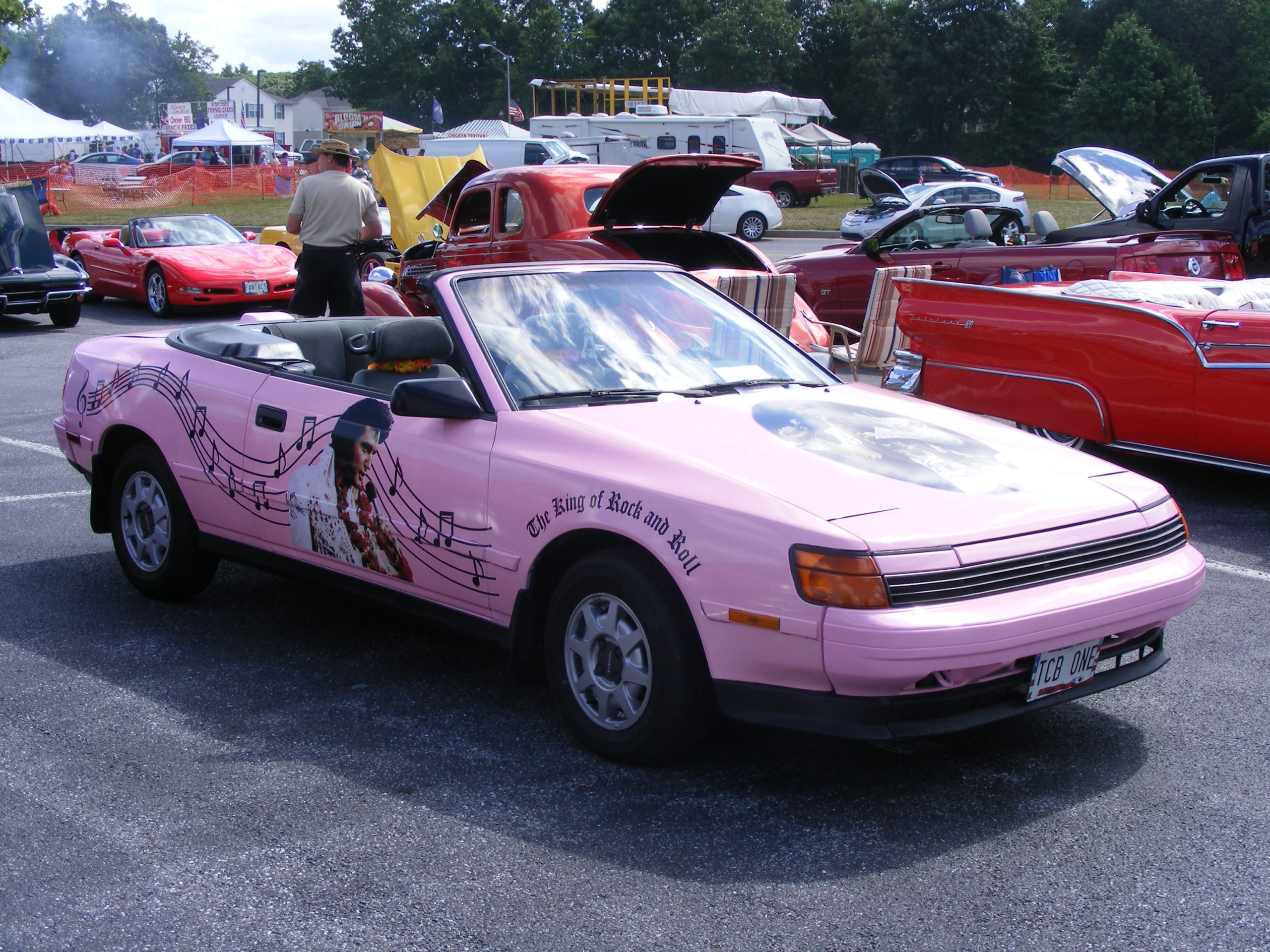 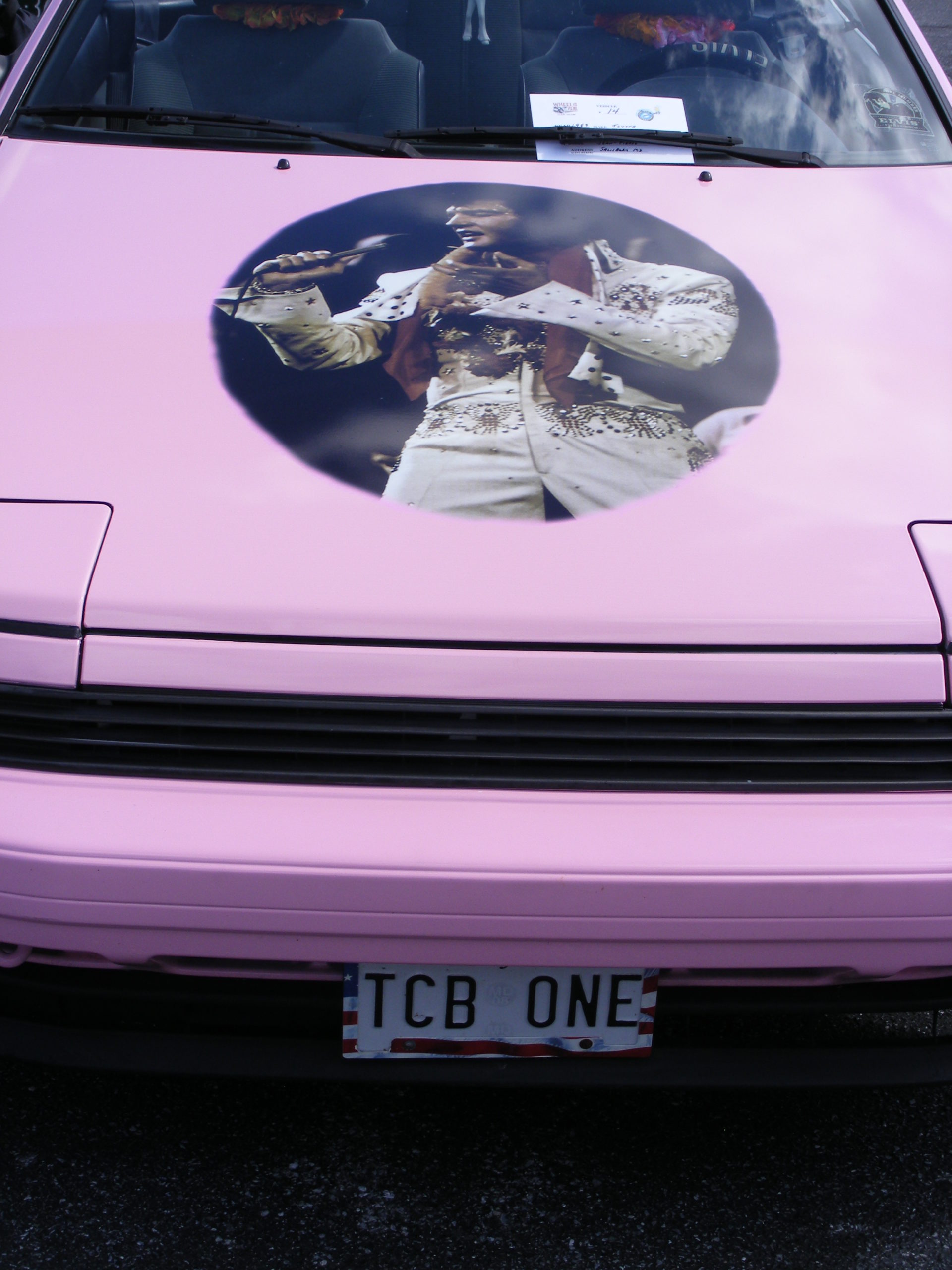 I decided to feature a few other cars here for a purpose. Has it occurred to you how many venerable nameplates have disappeared over the last decade or so? Names like Oldsmobile… 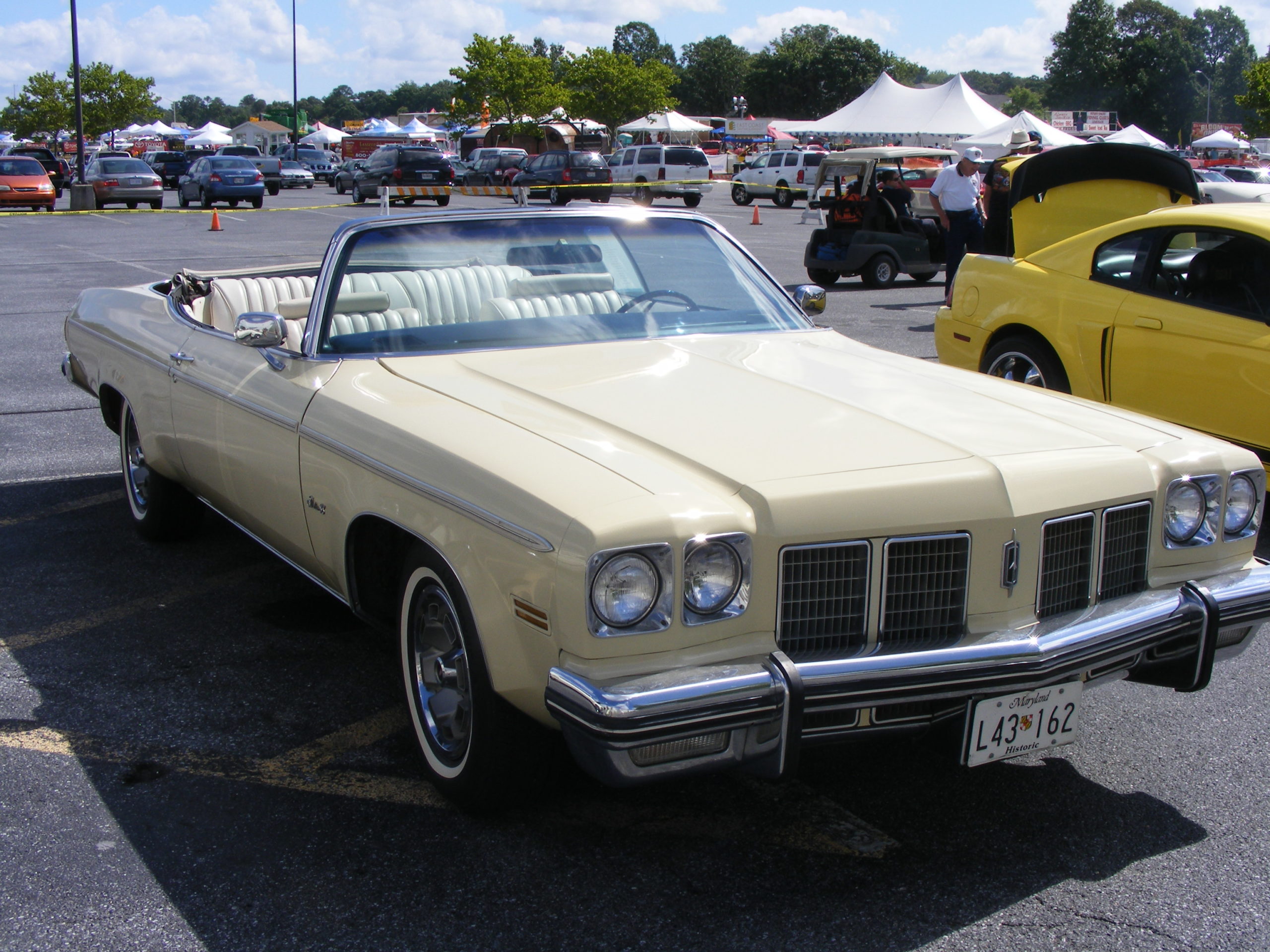 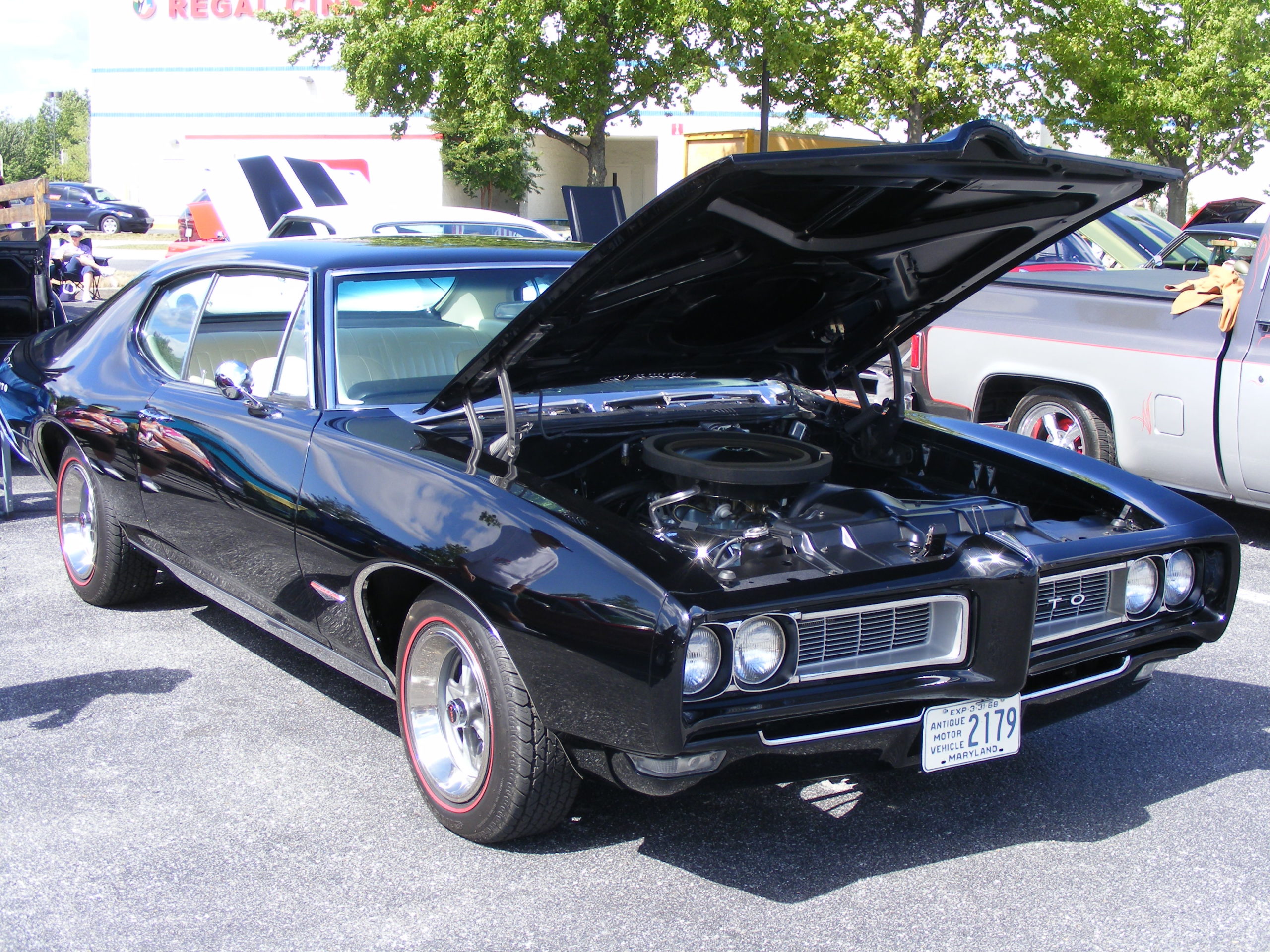 …or Mercury, just to name a few. 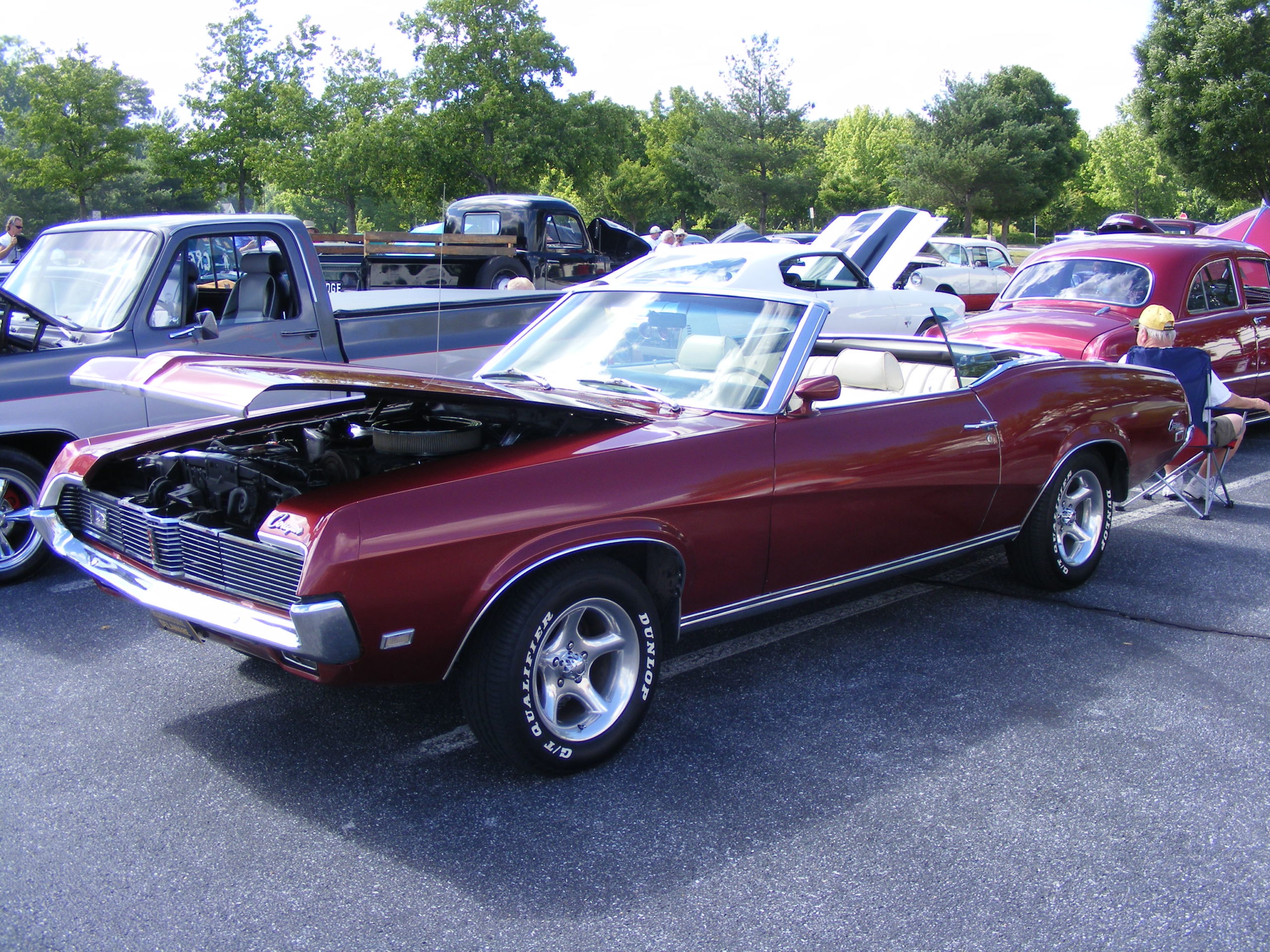 I’d love to find an AMC Javelin at one of these shows because I always thought those looked cool as well – yes, another nameplate that’s bitten the dust in my adult lifetime.

I added this one for a sentimental reason. My parents owned a 1964 Thunderbird when I was born. It wasn’t a convertible and it was baby blue instead of red, but you get the picture. And it gives me an excuse to symbolically wish my Dad a Happy Father’s Day. It’s symbolic in the sense that he never looks at a computer, fortunately he’s alive and well. 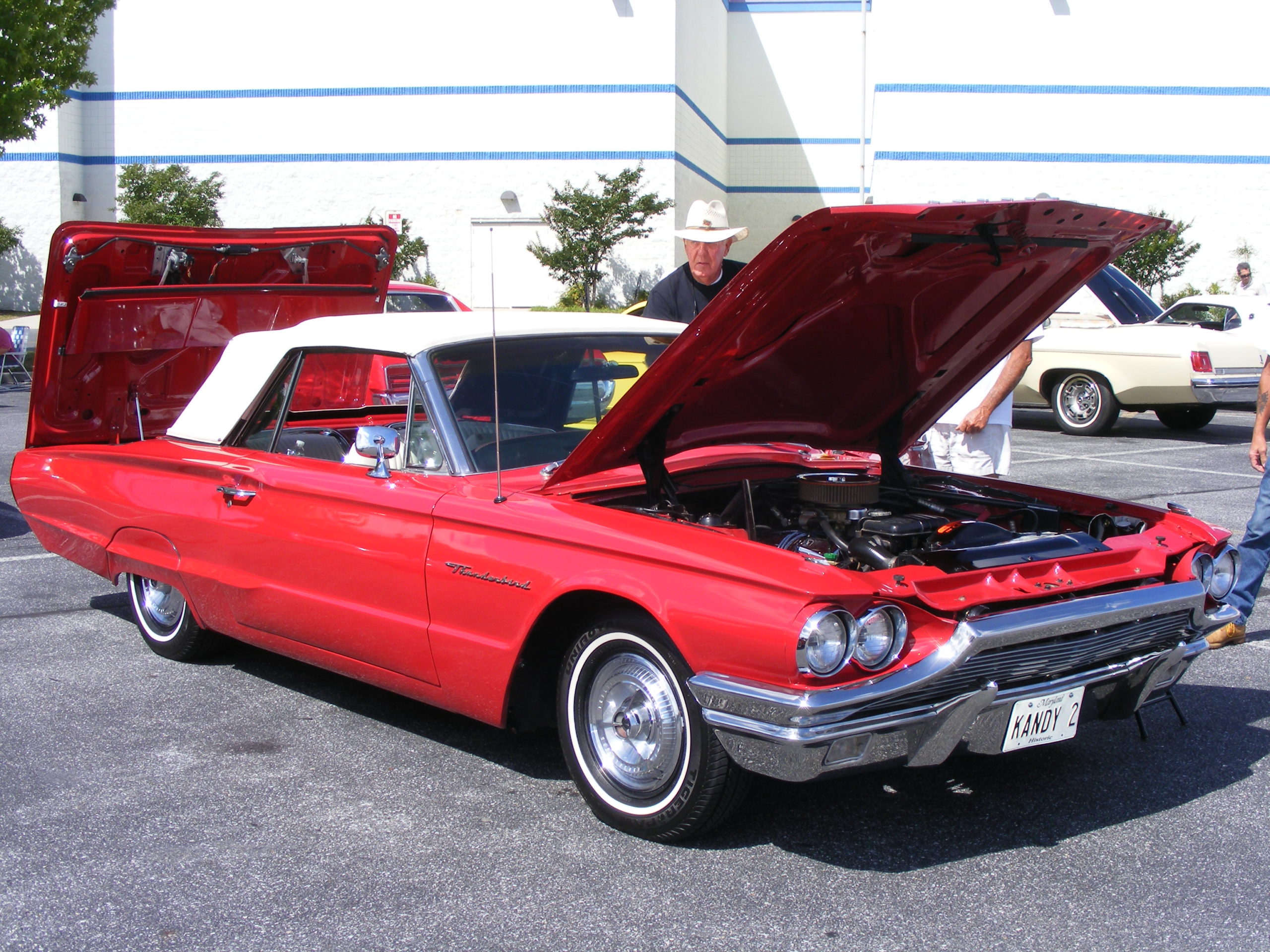 This car was worth showing for the board out front. 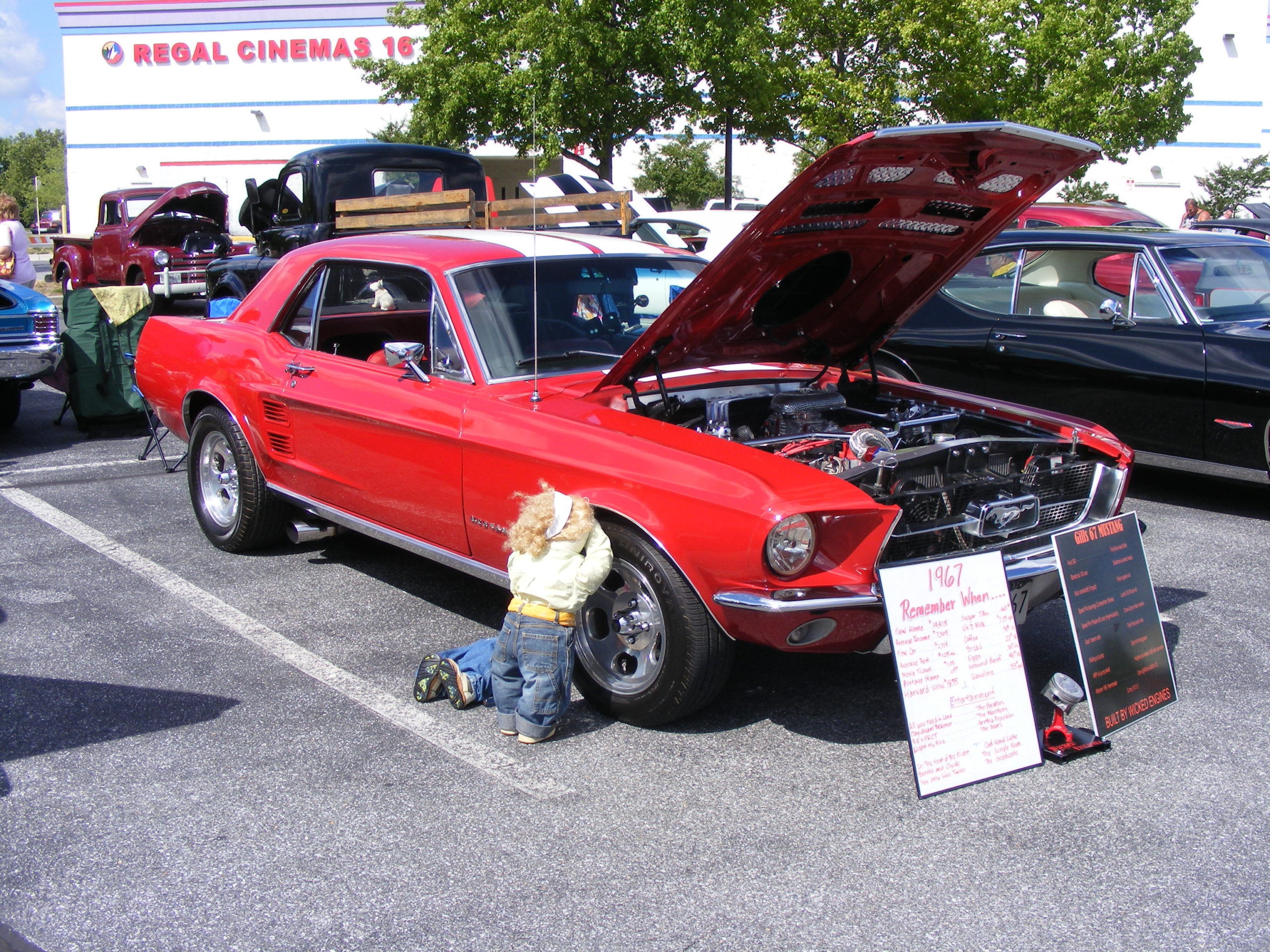 The board details some facts about 1967, when that Mustang was built. 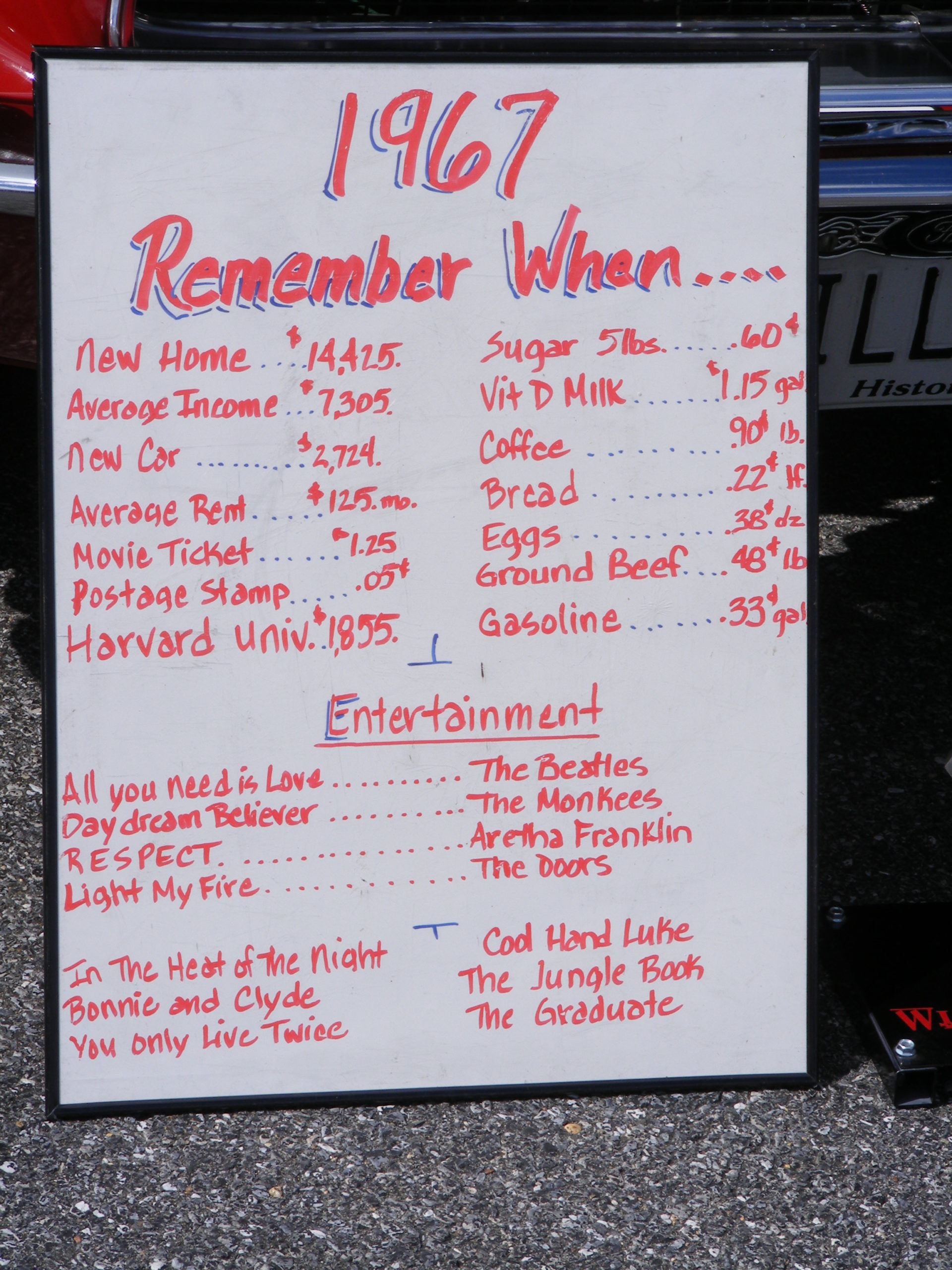 And it provides a brilliant chance to illustrate a point about the next picture, for 1967 is also the year that this guy’s opponent was first sworn into public office. He’s been there ever since and politically Ben Cardin has not aged as well as that red Mustang. 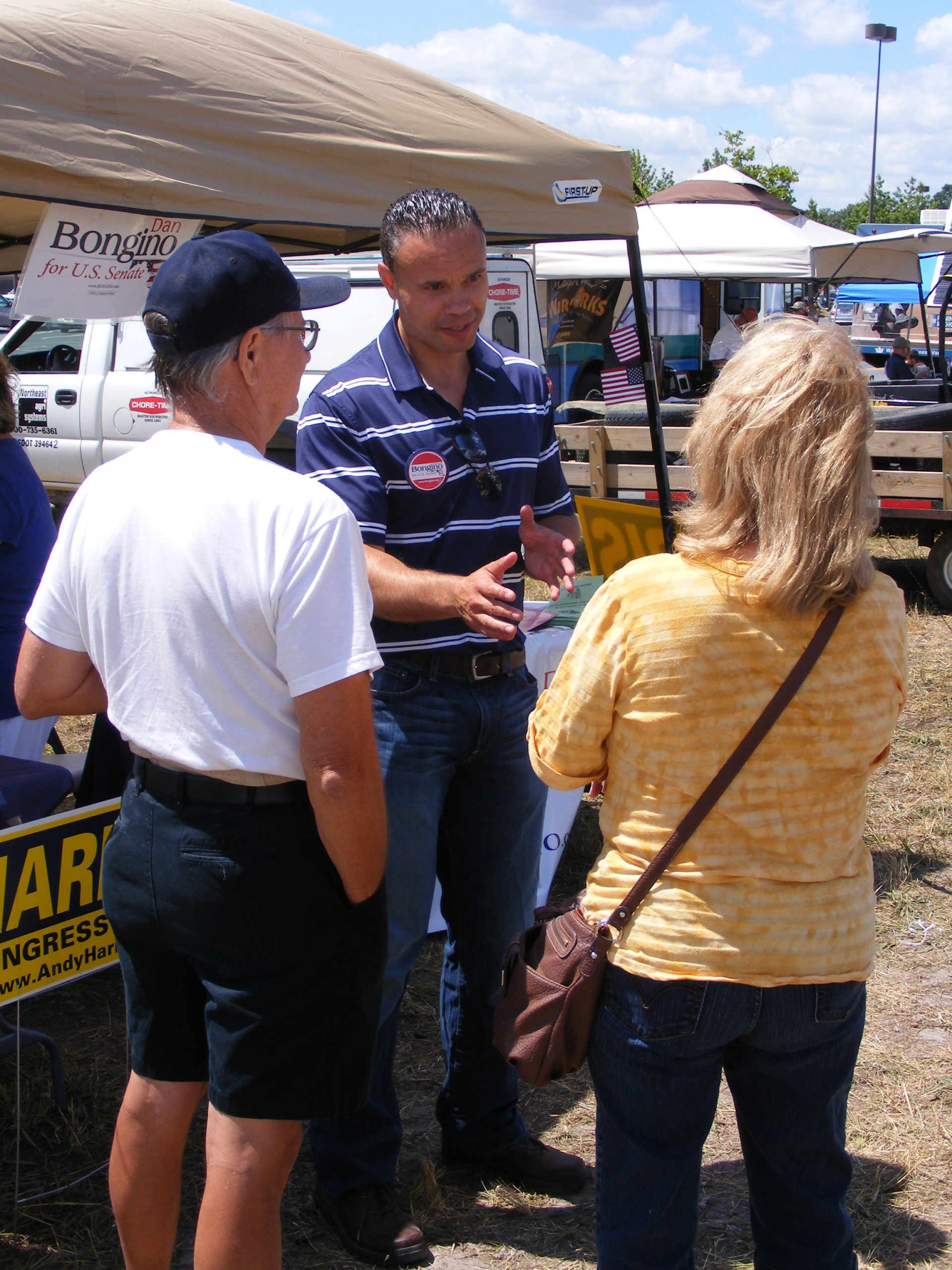 On the other hand, Dan Bongino spent most of four solid hours meeting and speaking to voters, while his volunteers helped keep the GOP booth staffed. I also found out Dan likes the same wraps I do, since he grabbed a quick bite to eat (and no, I did not take a photo of it.) Oh, that guy who was sworn in back in 1967? Yeah, he was there long enough for a few sound bites but that was about it.

Bongino wasn’t the only politician who dropped by over the two days. Delegate Mike McDermott said hello, and here he’s pictured with our county GOP Chair Dave Parker, who’s on the left. (That doesn’t happen often.) 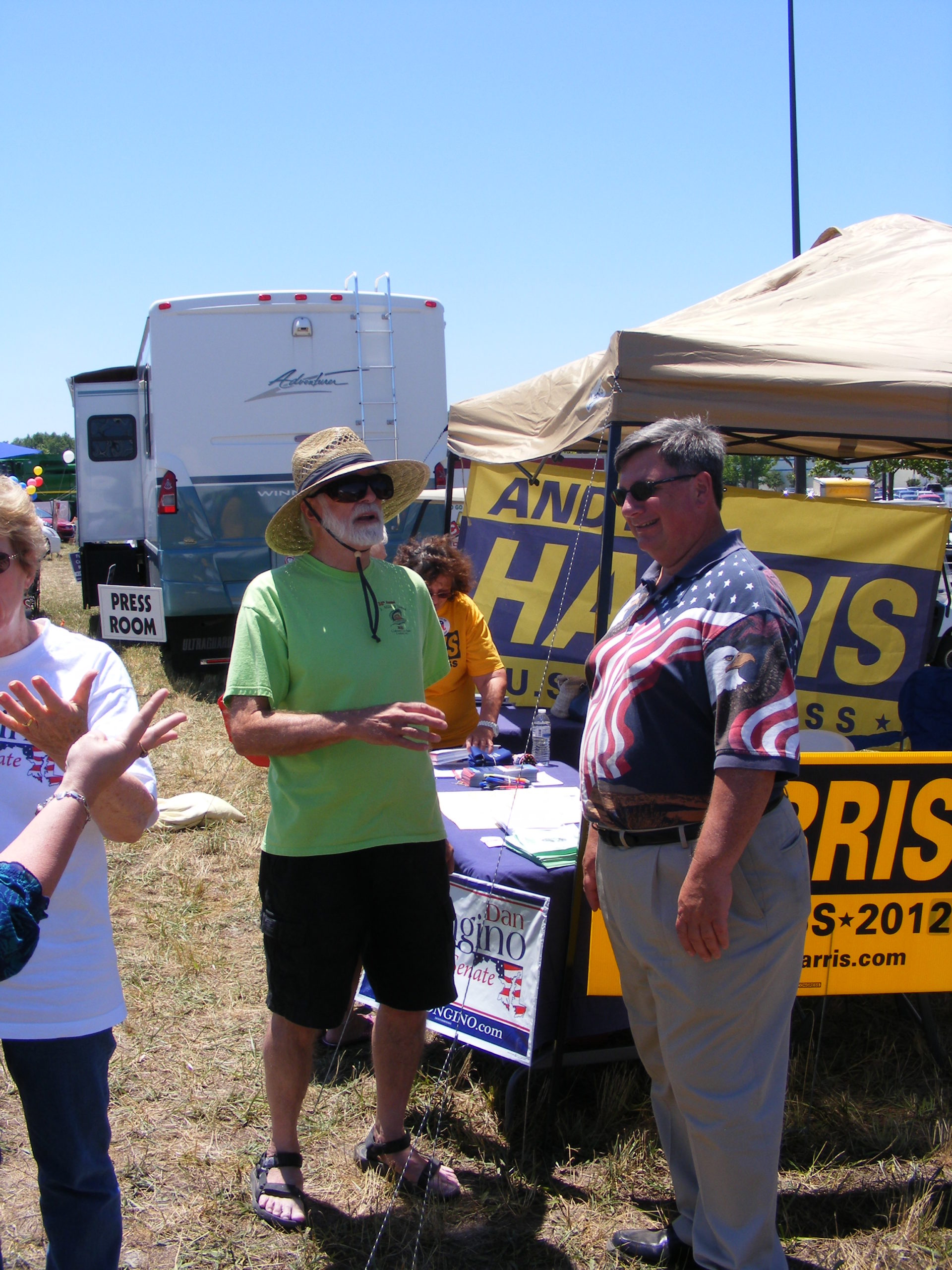 Andy Harris also came over with two of his kids on Friday, and I also have to point out State Senator Jim Mathias was kind enough to shake hands and say hello. He was the only Democrat to do so that I’m aware of.

By now most readers should know I seek out the political in almost everything, and the DCF was no exception because there were a number of agricultural-related lobby groups represented. Needless to say, Maryland’s Department of Agriculture was there, pushing an $18 million cover crop program. 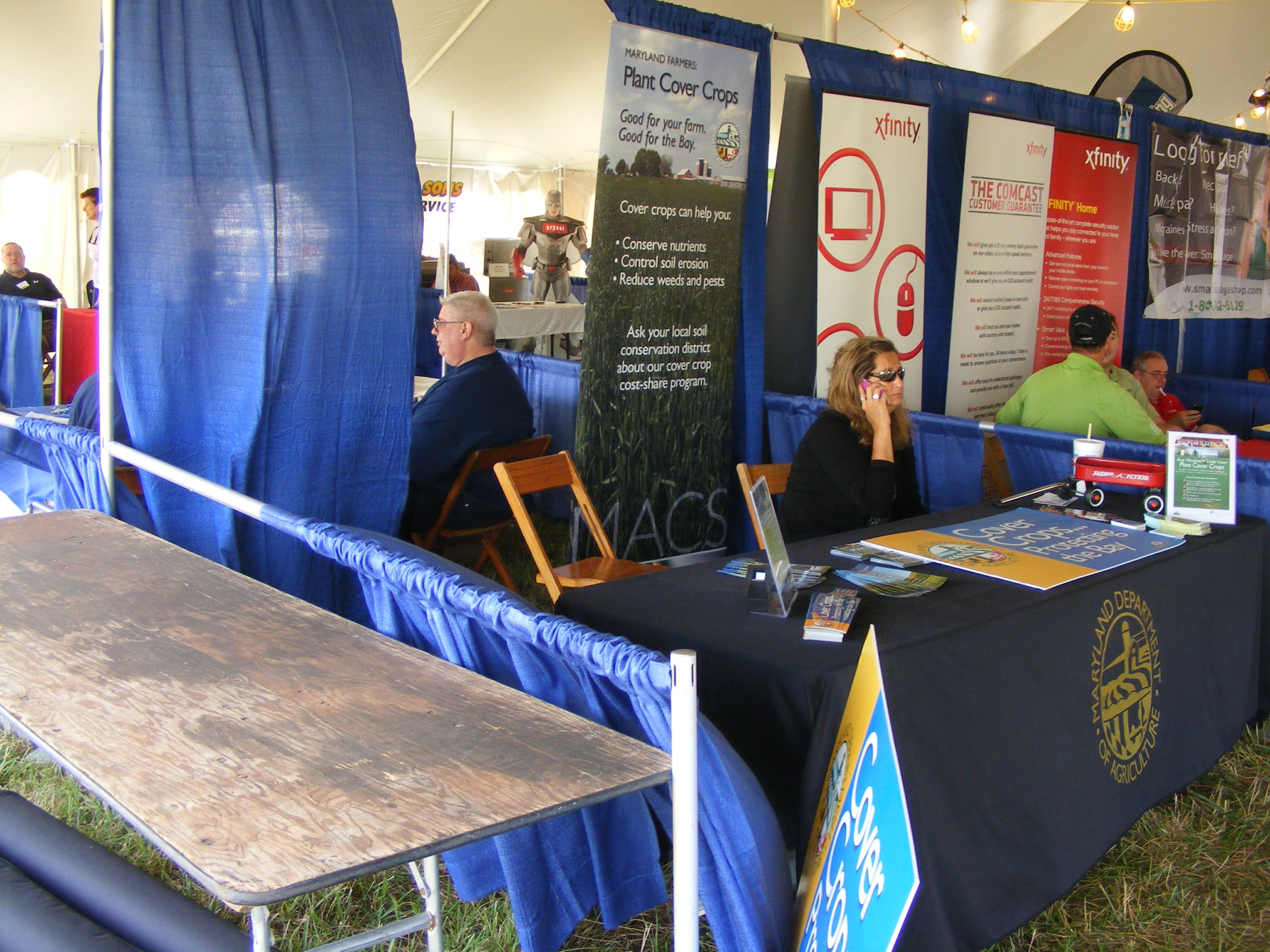 The lady sitting there certainly looked bored. But other groups were less obvious as to what they stood for. Take the group Let’s Be Shore for an example. Their purpose was to, as they said, establish a dialogue about our watershed. But one has to ponder what gets the Maryland Humanities Council interested in agriculture? 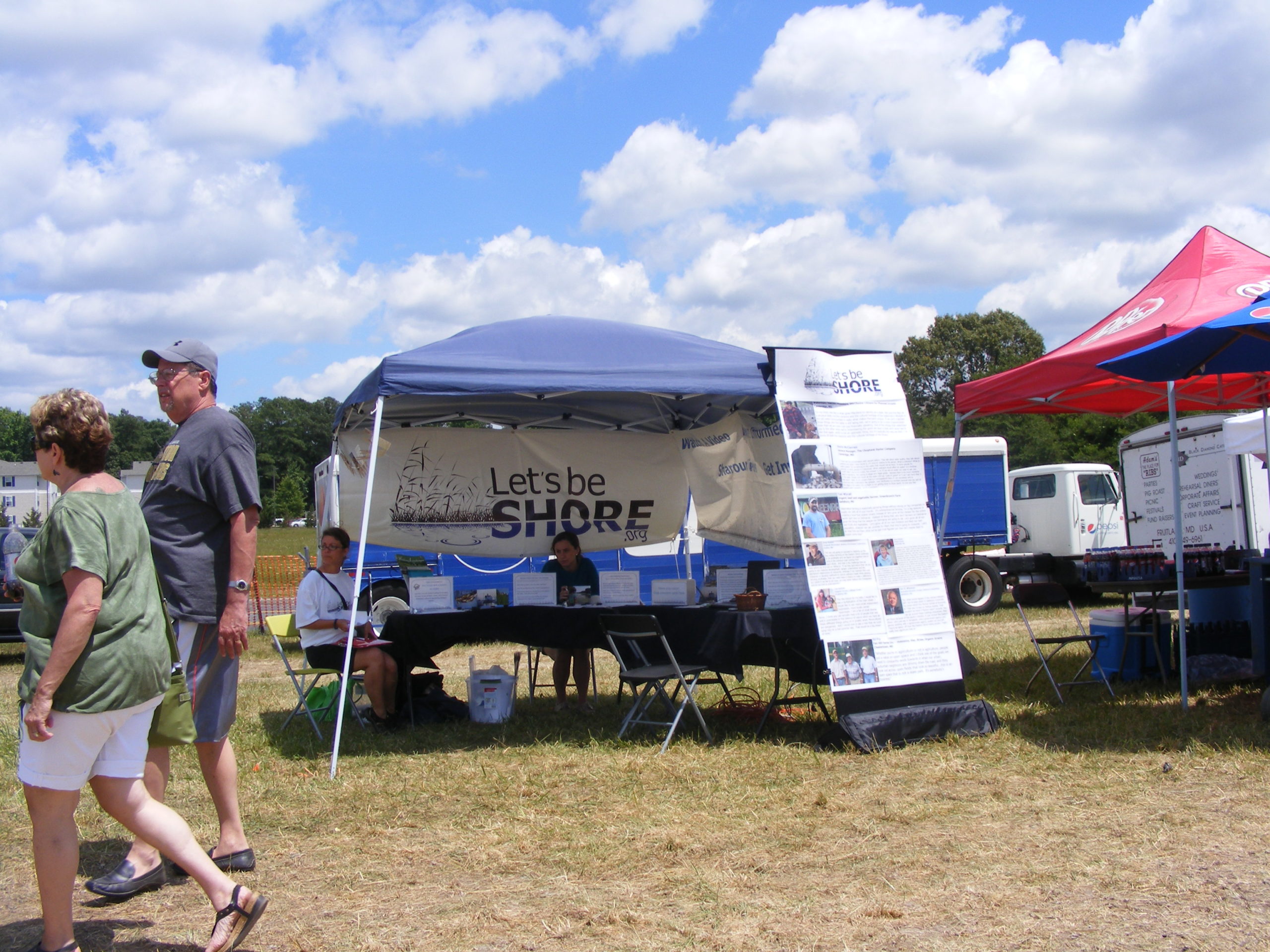 They are planning public meetings for later this summer, and if I can I’ll have to show up. I definitely have some opinions on the Watershed Implementation Plans of which they speak.

Food safety was the mantra of CommonGround. 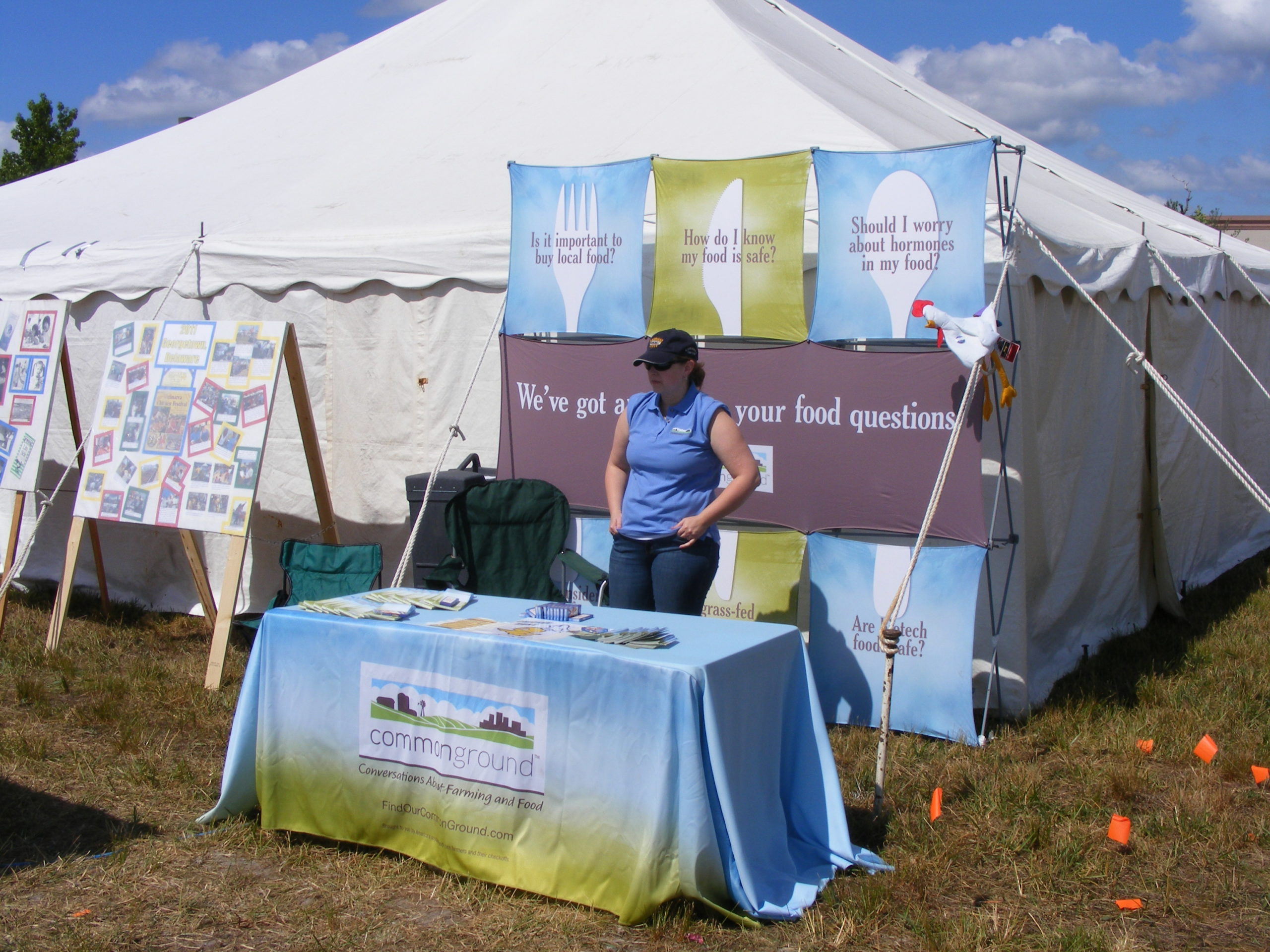 The little brochure they were handing out was intended to correct “common misconceptions” about the food industry, such as the impact of genetically modified food. “Farmers and gardeners have been creating plant hybrids for as long as they’ve been growing plants,” states one portion of their handout. “Biotechnology simply serves as a more technologically advanced method.”

To be honest, I really don’t have an informed opinion on what these multinational corporations do with plant research, but I did find it intriguing that the effort is sponsored by “America’s soybean and corn farmers and their checkoffs” and is aimed more toward the women who primarily are food buyers.

This group, though, hits closer to home. 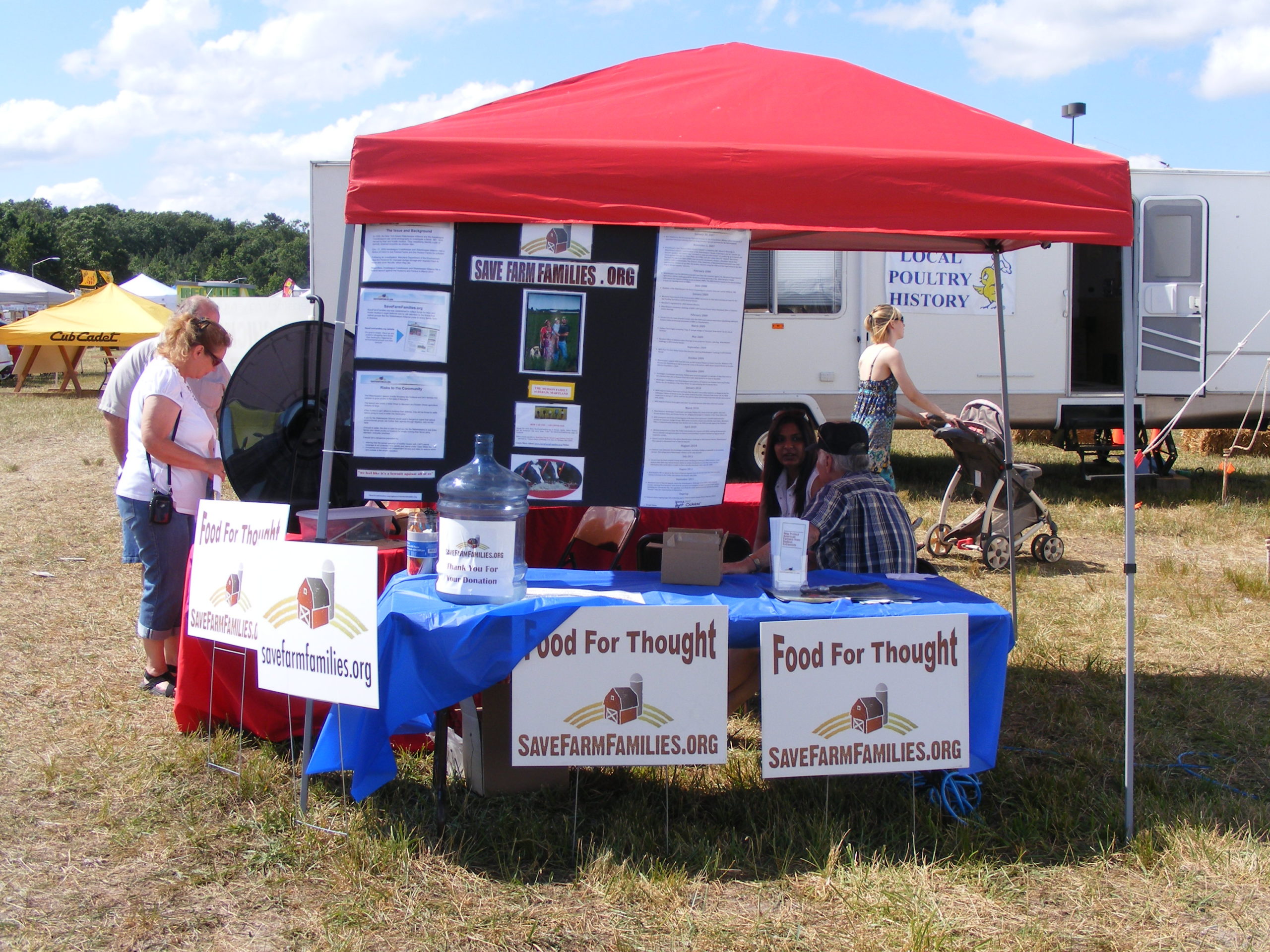 As a group “raising awareness about the dire threat raised by environmental activists who sue first and ask questions later,” I can see them coming into conflict with some of the other groups represented. I find it strange, though, that environmentalist groups and their supporters tend to be from big cities and are probably the most likely to complain about the smell of the country.

Now when I smell the obvious by-product of raising chickens I joke that it “smells like Delaware.” But to farmers that’s also the smell of money and the odor of continuing the process by which people all over the world are fed – the chicken manure fertilizes the grain used for the feed which eventually once again creates the by-product. Those of us who understand how our region works appreciate the economic impact farmers create, but those who fly through it on the way to their beach homes simply complain when they drive by a newly fertilized field.

But they would complain more if that chicken they were planning on barbecuing wasn’t on the grocer’s shelf, wouldn’t they?

2 thoughts on “2012 Delmarva Chicken Festival in pictures and text”