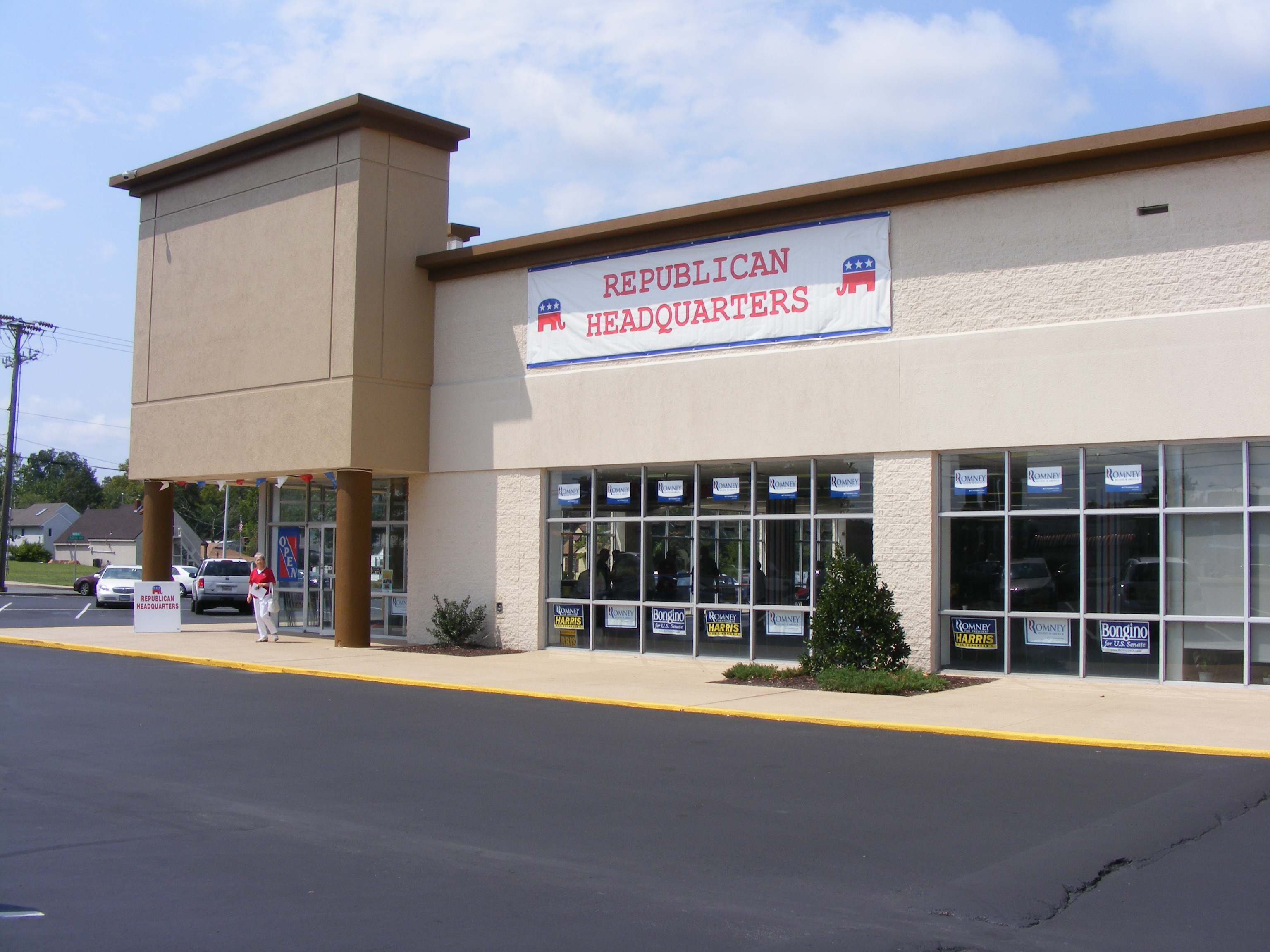 If it wasn’t made obvious by the sign outside, seeing this inside may clue you in. 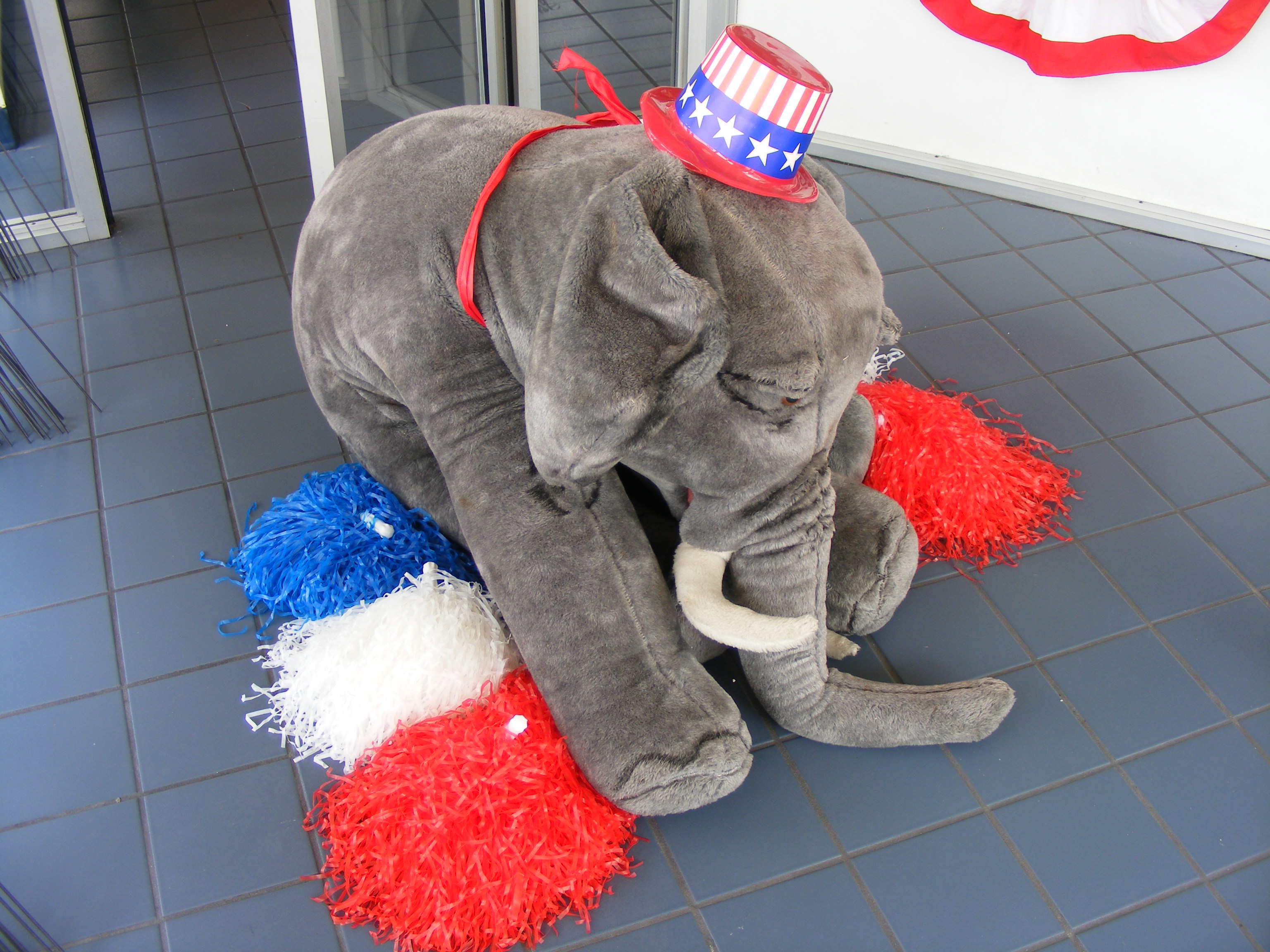 That petite pachyderm sits at the entrance of the newly-opened local Republican headquarters, which opened yesterday morning to a crowd of perhaps 200 people all told during the 2 1/2 hours of fellowship and festivities. 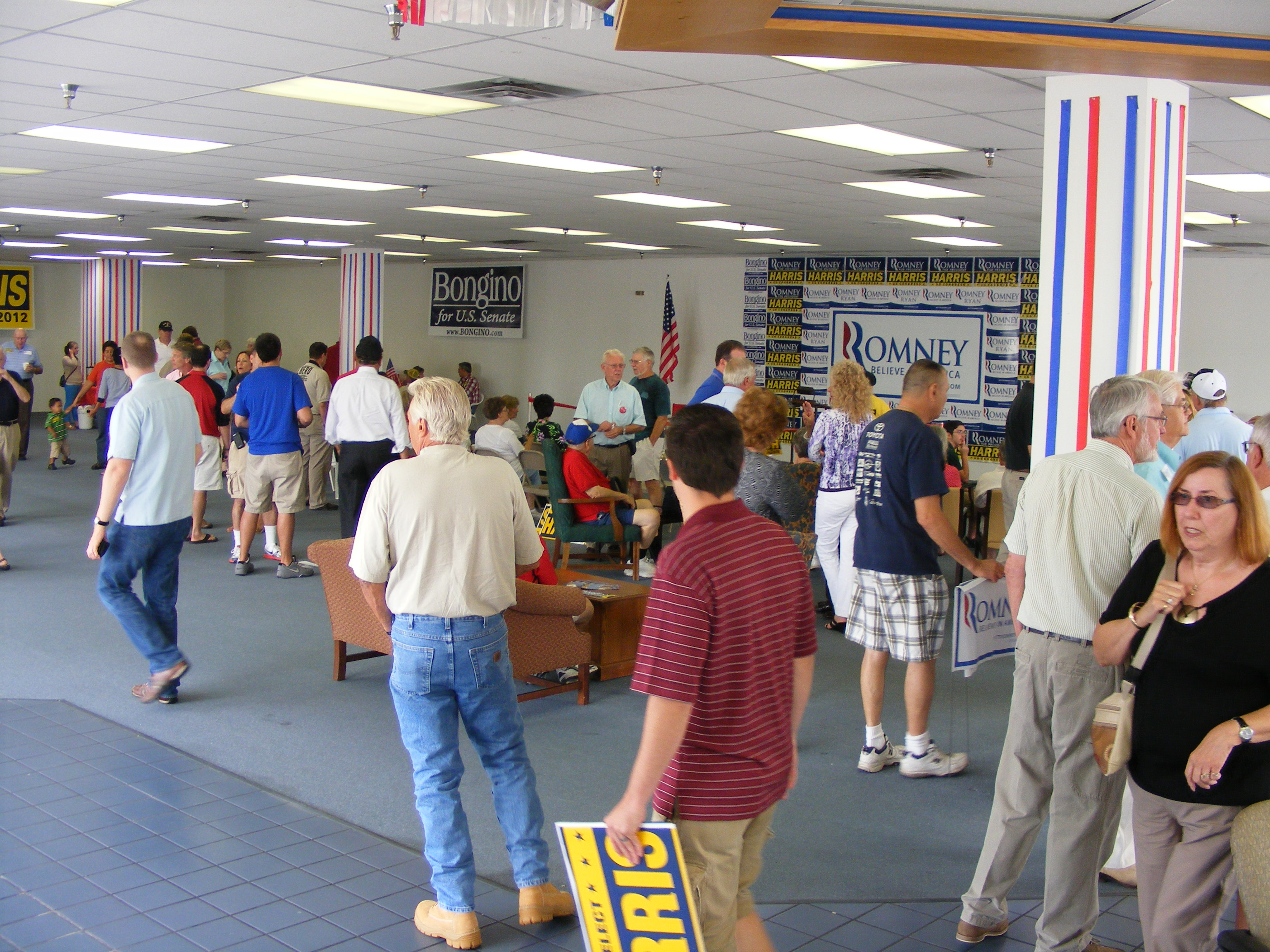 They marveled at the large expanse of a former Blockbuster video store now converted for temporary usage as a reception and staging area for the local Republican Party and were treated to remarks from various local campaign representatives and Congressman Andy Harris. 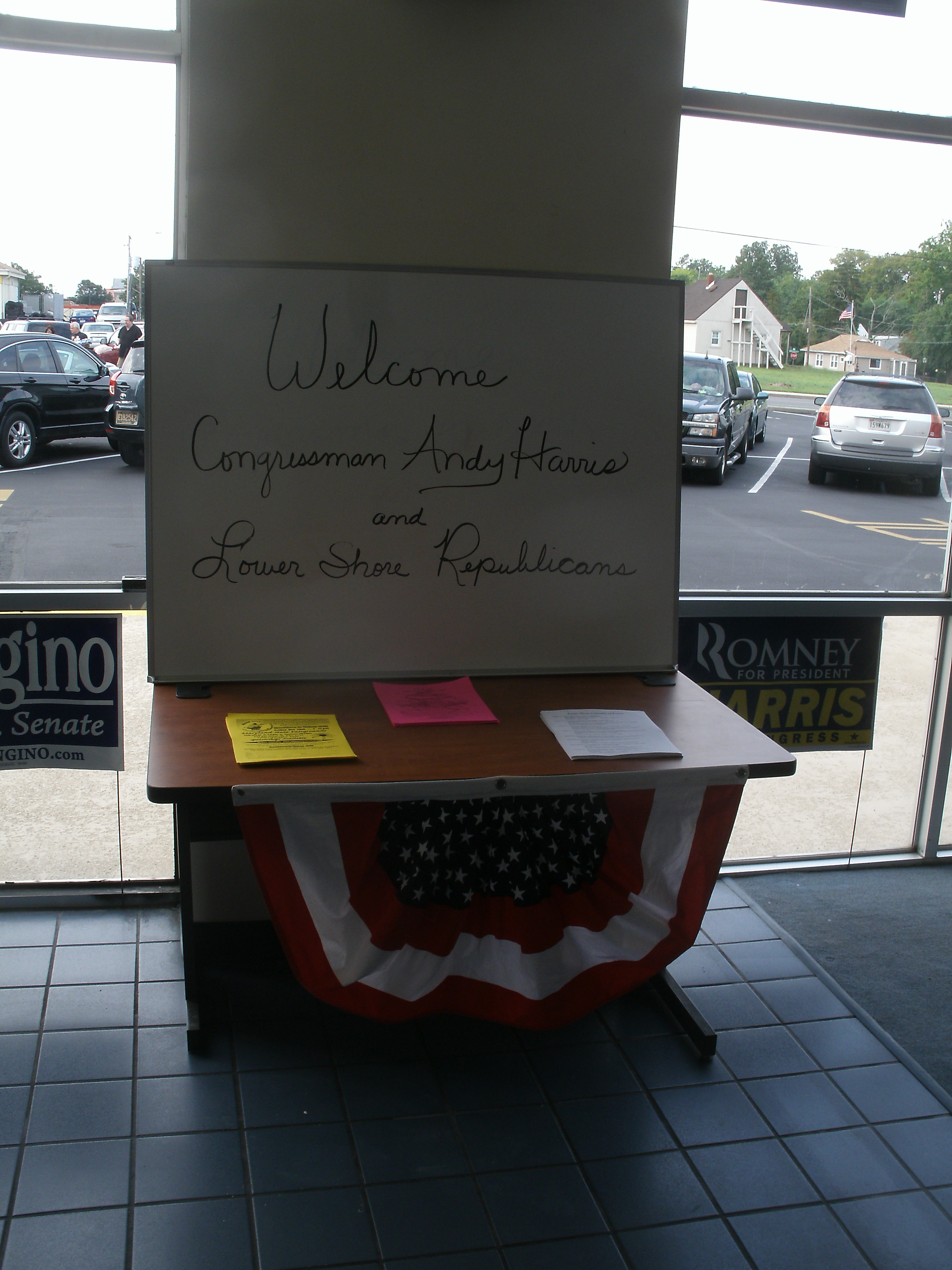 While the lower Eastern Shore probably isn’t going to make or break a national or even statewide campaign due to its dearth of registered voters when compared to the state as a whole, it’s important to have a presence here nonetheless. A volunteer here frees up time and energy which can be spent in more vital areas by enlistees closer to the action. 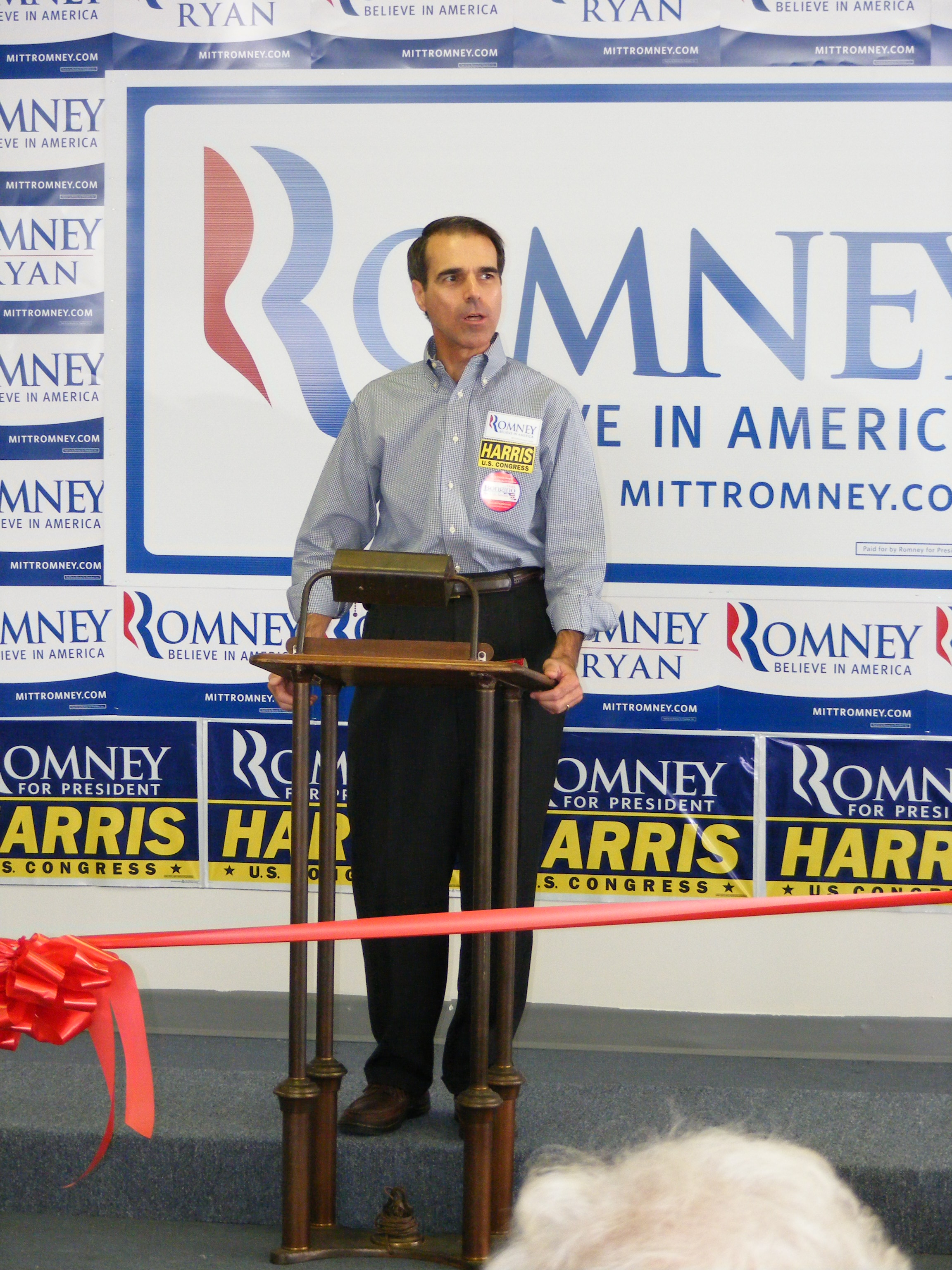 Prominent among the speakers were the Lunas, as Luis welcomed the crowd and introduced a number of local elected officials and dignitaries. Included in that number were State’s Attorney Matt Maciarello, County Council members Joe Holloway and Stevie Prettyman, and Sheriff Mike Lewis from Wicomico County, Delegate Charles Otto and State’s Attorney Dan Powell from Somerset County, Delegate Addie Eckardt from Dorchester County, and Sheriff Reggie Mason from Worcester County, along with a number of Central Committee members from each of the four counties. Many of them would be in the crowd standing behind those cutting the ribbon. 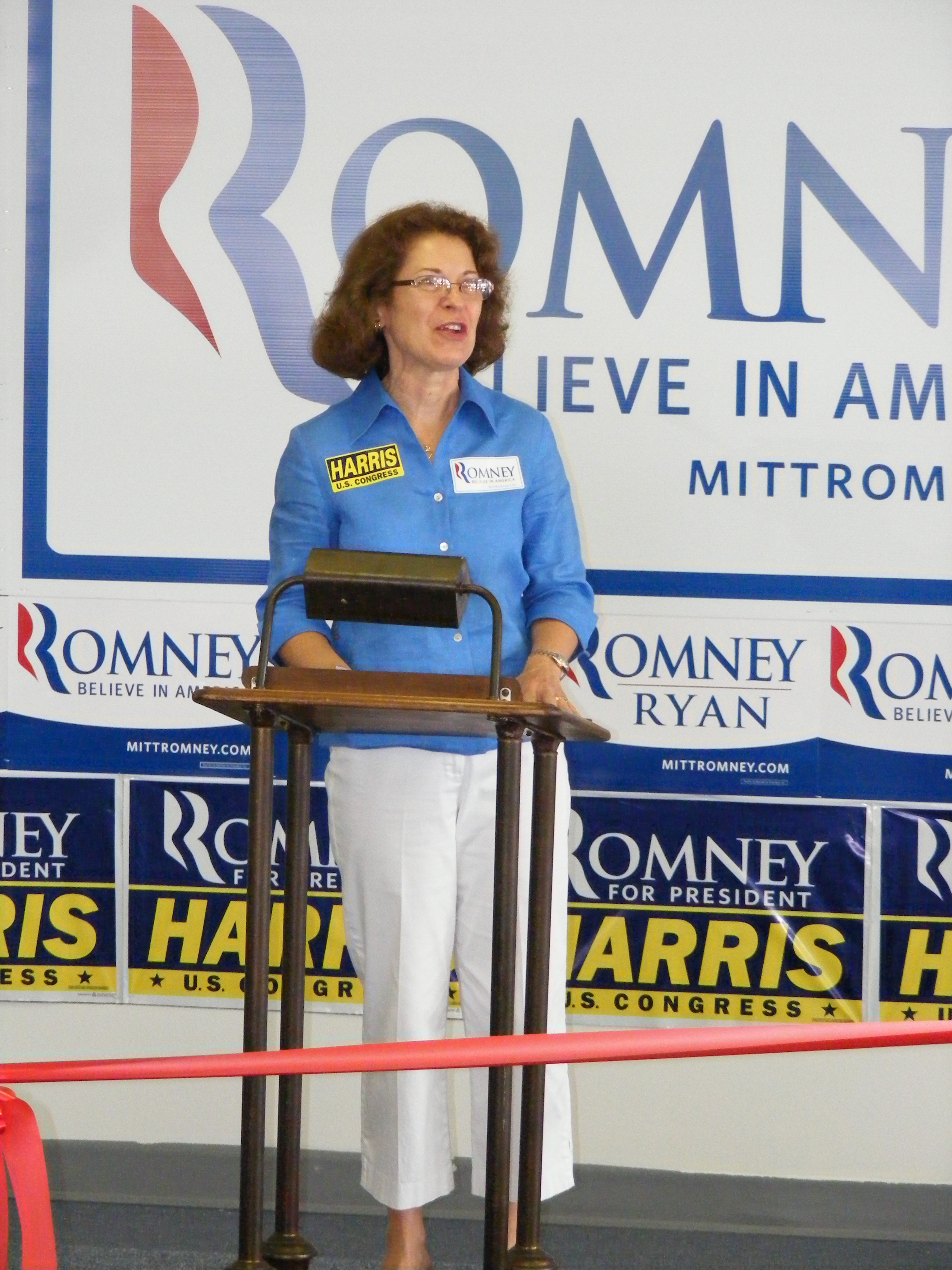 His better half Bonnie, who serves as the Wicomico County chair for the Romney/Ryan campaign, exclaimed “I have no doubt this will be a fantastic campaign season!” She went on to point out that Maryland has voted for Republicans on top of the ticket as recently as George H.W. Bush in 1988 (after going for Reagan in 1984 as well.)

She also thanked the volunteers who had pitched in to freshen up the old Blockbuster store, a location close by one we used for a headquarters in the last Presidential election in 2008 at the opposite end of the same strip mall. This location is far larger and rivals the size of one we used in 2010, a venue for which we received some financial assistance from the RNC. This one is all a local effort. 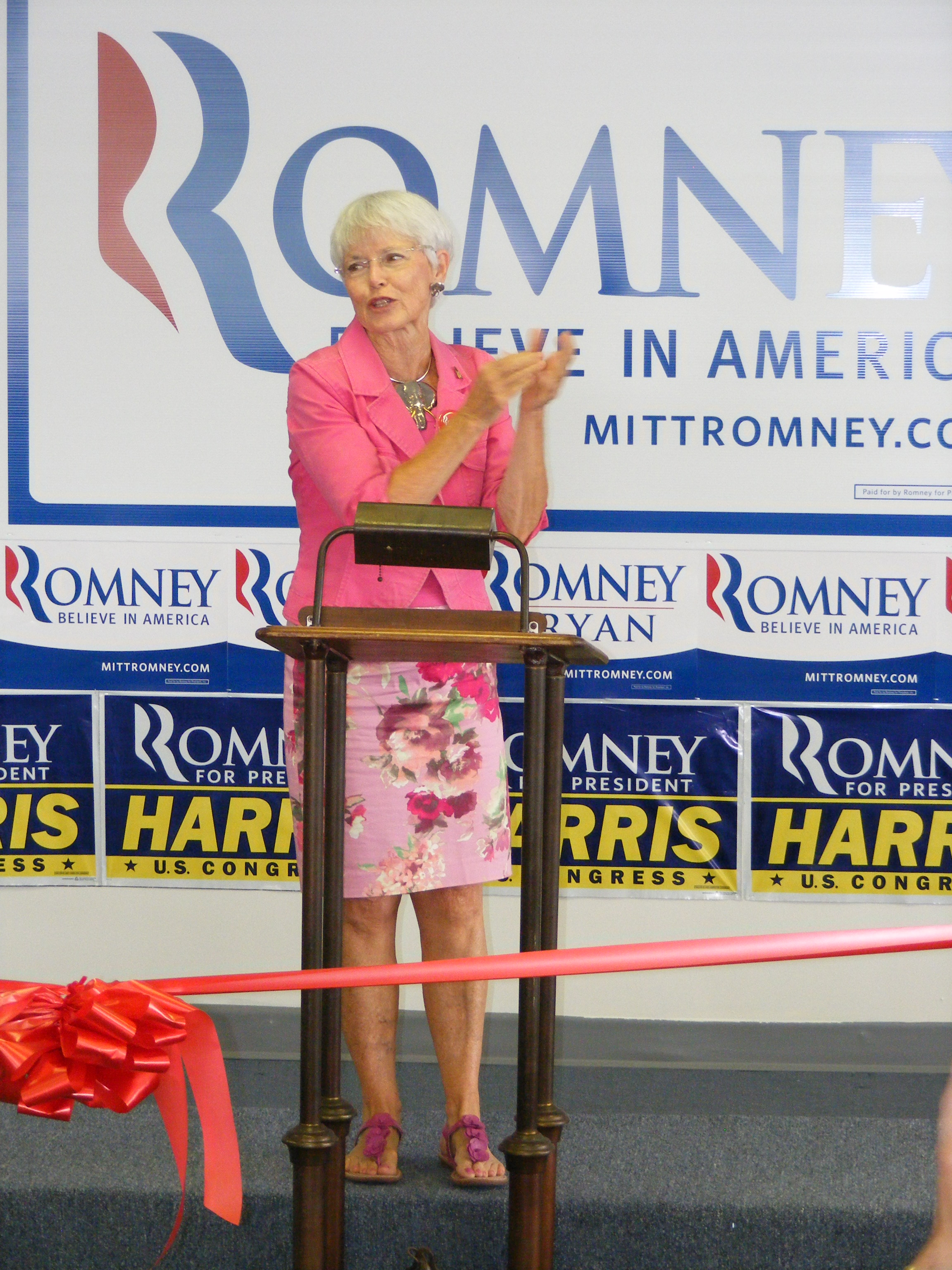 “We need to turn this ship around,” said Delegate Addie Eckardt, who followed Bonnie to the podium. While she was speaking about the national scene, she could just as easily been talking about the state situation and arguably even locally. Of course, Wicomico County has an elected Republican majority on its County Council, one which allows them to claim supremacy in county elected officials overall.

But, in my opinion, too often our conservative County Council majority goes wobbly at the most inopportune of times. I guess the best way to turn our ship of state around in Wicomico County would be to elect a conservative County Executive in 2014, but I’m putting the cart ahead of the horse. 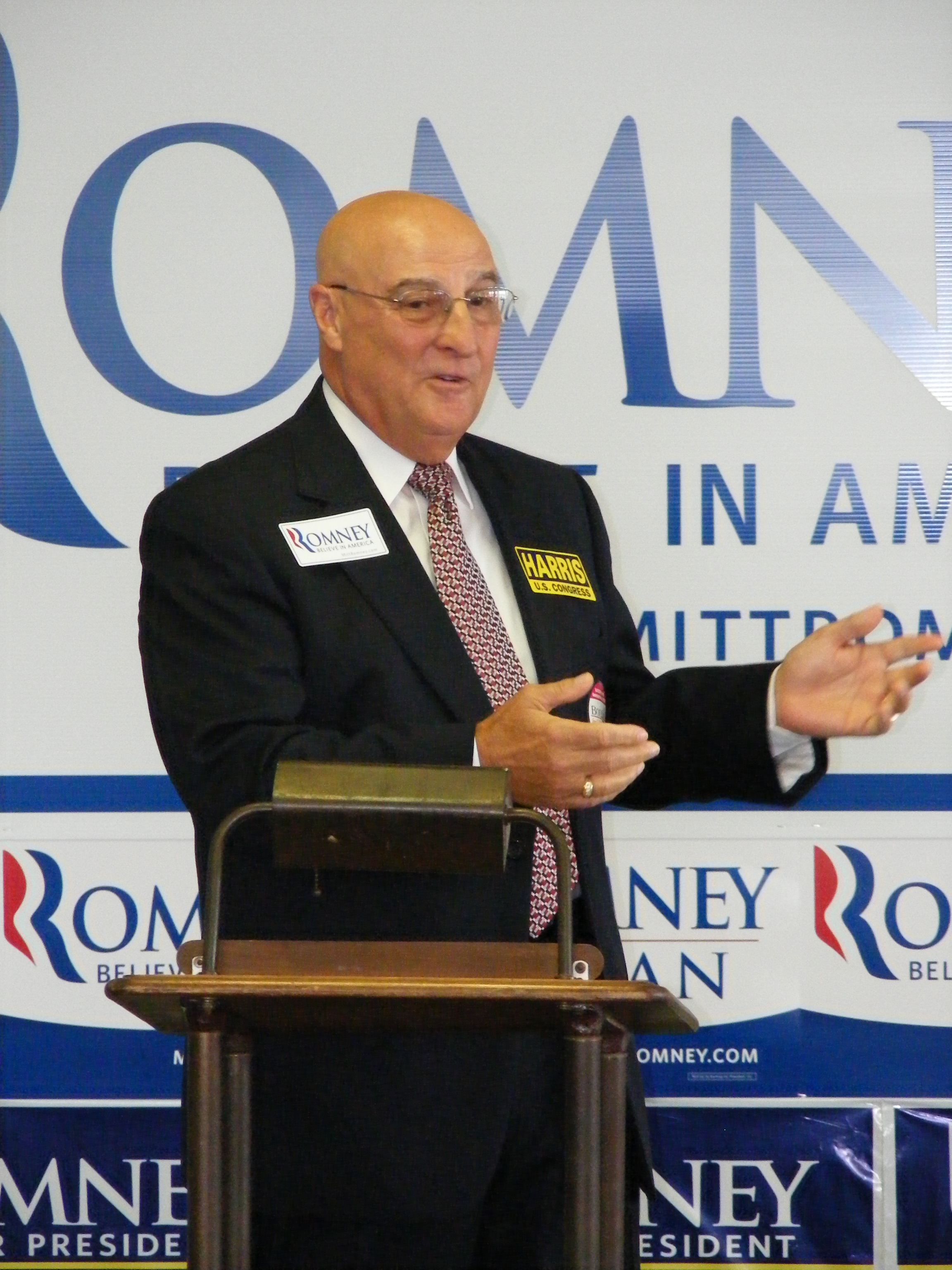 Representing Dan Bongino locally was Bill Harris, who came down from Cecil County to represent the Senate candidate. Harris related the fact that Dan was “really moved” by all the support he received at the Delmarva Chicken Festival, which came in part from the dedicated volunteers he has. (Included in that group is Jackie Wellfonder, who’s pictured below at the Farm and Home Show.)

Harris also promised that “something very exciting” is brewing with the Bongino campaign, and we’ll know about it within the next 10 days. Whether that something is promising poll numbers against Maryland’s ultimate do-nothing politician, Ben Cardin, or great fundraising figures, or a debate coming to Salisbury – well, I don’t know, either. Hopefully my friends within Dan’s campaign (or the man himself, since he’s a big fan) will keep me posted. 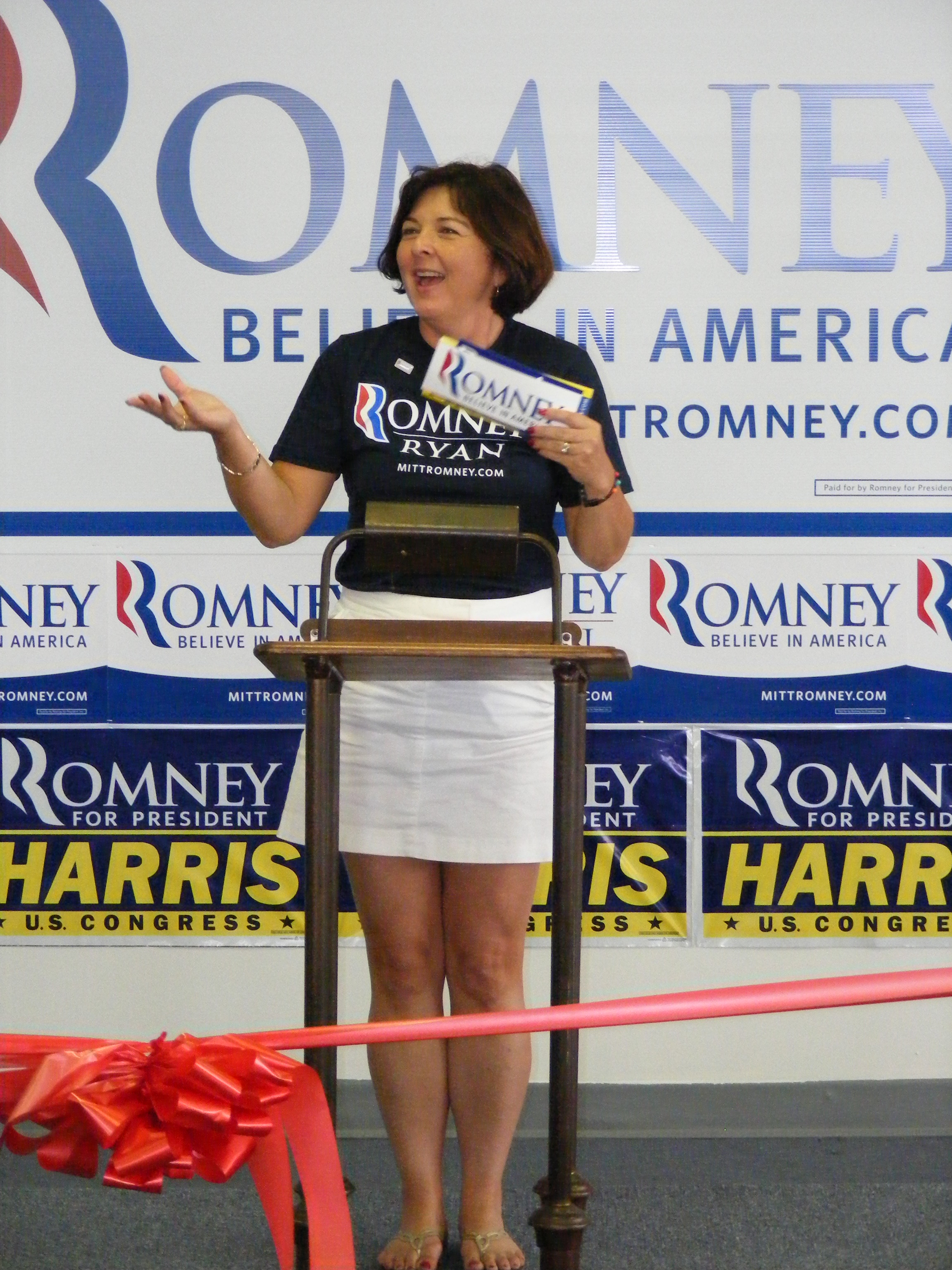 Representing the state GOP in the absence of Chair Alex Mooney was First Vice-Chair Diana Waterman, who came down from Queen Anne’s County to assist in the efforts. She told us that the Maryland Romney campaign “is one of the best organized in the country.” All that is well and good, but whether Romney has a chance of succeeding in Maryland “boils down to voter turnout.” Not only would it bolster the chances of Dan Bongino and Mitt Romney winning, but a huge Andy Harris victory would discourage Democrats from making a concerted future effort in the First District.

Waterman also commented on the bumper stickers in her hand, noting that she wanted to see them on every vehicle in the parking lot. While it may be an inconvenience to have these stickers on a bumper for a couple months, it was a small price to pay when compared to having another four years of Barack Obama or six years of Ben Cardin, she said.

Returning to the podium, Luis Luna noted that since Paul Ryan was selected as Mitt Romney’s running mate, “excitement is through the roof.” He claimed that $10 million was raised online and 45,000 new volunteers have been added in the week since Ryan’s choice was known. People “recognize Obama has failed,” continued Luna, who also brought up a stark statistic: no President in modern times has presided over a net loss in jobs until Obama. 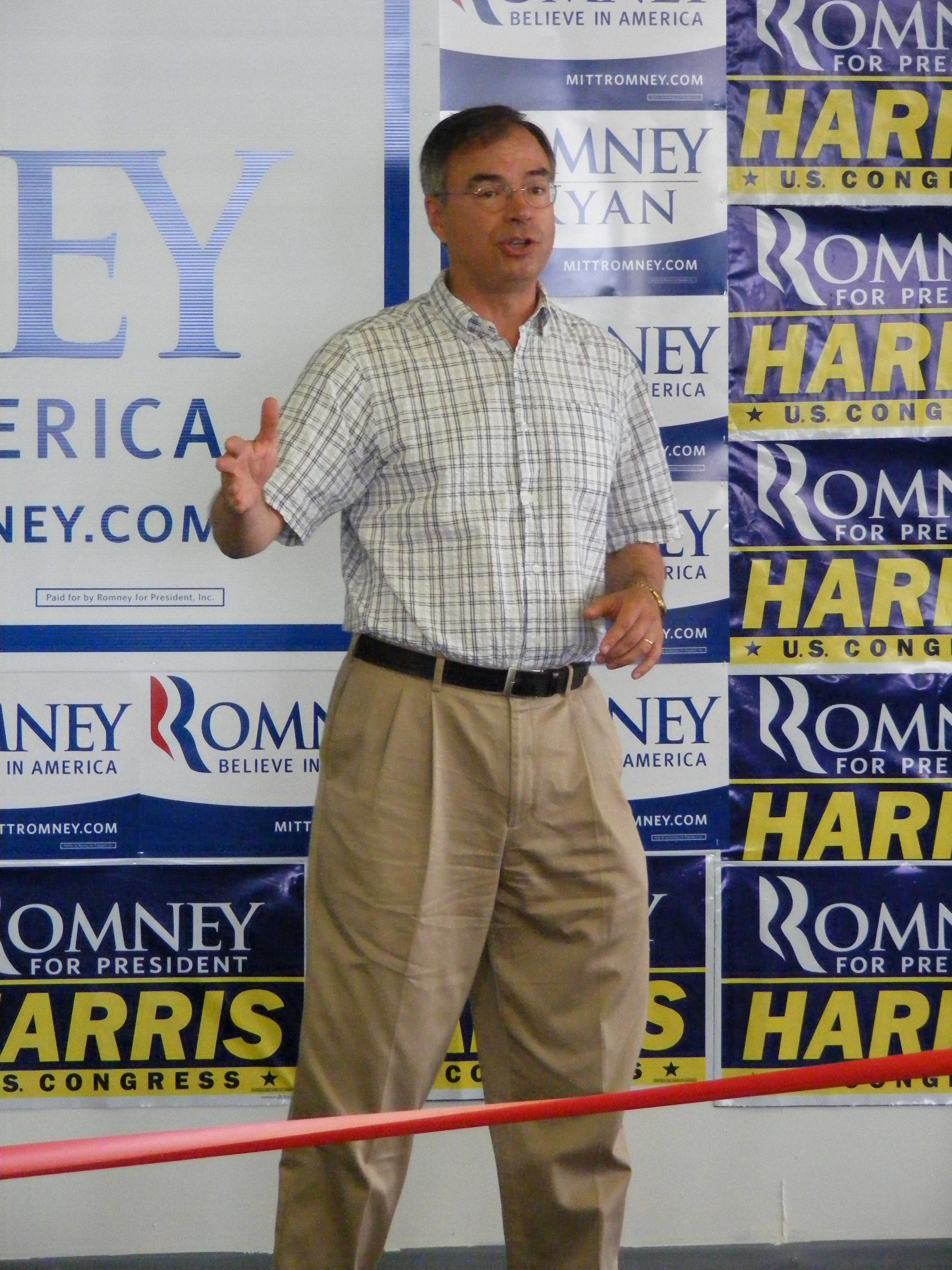 Because he works with the bottom half of the ticket on a regular basis, Andy Harris is in the position to assess Paul Ryan as “the real deal…just a straight-talking guy.”

“No hype, no teleprompter,” said Harris on Ryan, and Andy opined that Ryan was the last person Democrats wanted to see Republicans select. We would provide a contrast to government by illegal appointments and Executive Orders, Harris noted.

Andy also remarked on seeing Senator Ben Cardin at an event he attended earlier yesterday morning in Pocomoke City. “You know he’s worried” about Dan Bongino if he’s in this part of the state, Harris assessed.

Finally it was time to cut the ribbon, although the speechifying wasn’t quite over. 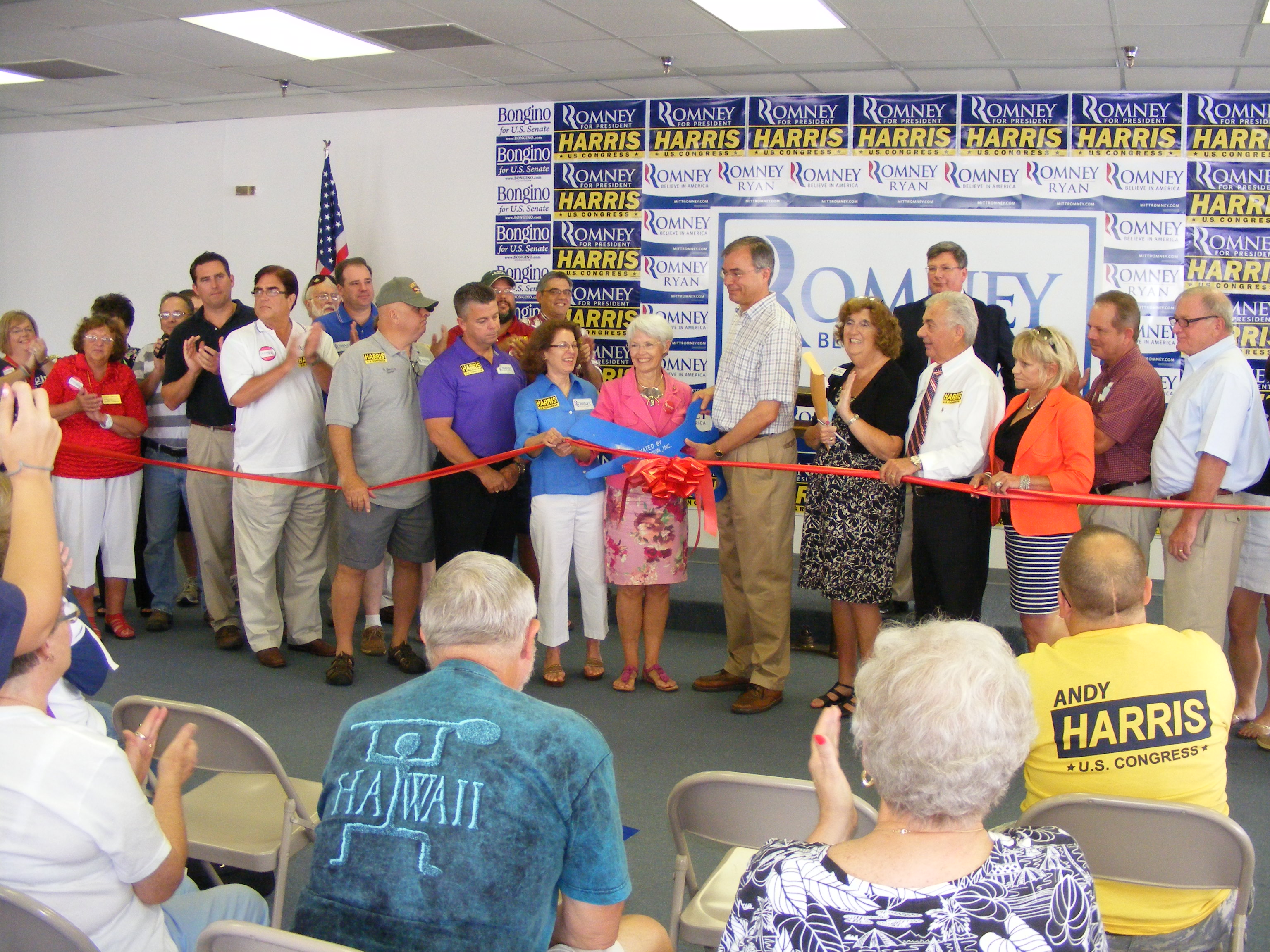 Before the ribbon was cut, Delegate Mike McDermott – a latecomer to the event, having also attended the Pocomoke VA dedication – said of those lined up behind the ribbon, “These folks are all in…to get them all out.”

The general feeling among those gathered was that America was ready for a little R & R. 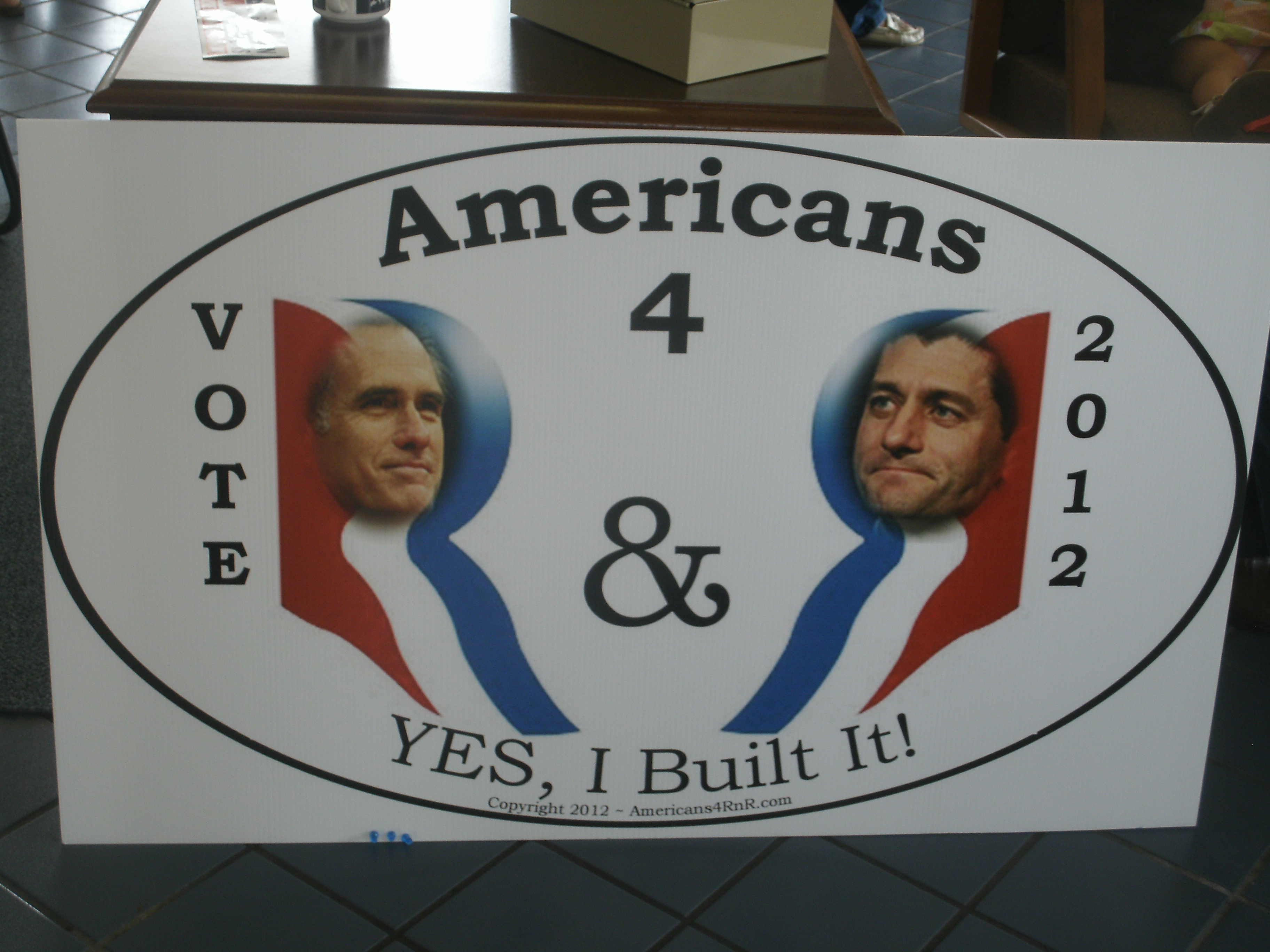 While it’s not worthy of a post by itself, I should note that I stopped by and sat a spell at the Wicomico GOP’s presence at the Wicomico Farm and Home Show. Tom Hughes (on the left) and the aforementioned Jackie Wellfonder were among my cohorts today.

Jackie logged a lot of hours at the WFHS, and she should be commended for her dedication. I did plug her website to a couple of folks while I was there.

Originally I was going to add my thoughts about a second political aspect to the WFHS, but I think I’ll save them for Monday morning.