As part of the opening ceremonies for the Delmarva Chicken Festival, we heard from a number of poultry industry figures, the agriculture secretaries of our respective states, and local representatives to Congress.

I’m going to have a more broad view of the proceedings later this weekend, but I wanted to point out some of what was said about the poultry industry, which event co-chair Robbie Tarpley Raffish called “one of the most important things we can teach our children.” 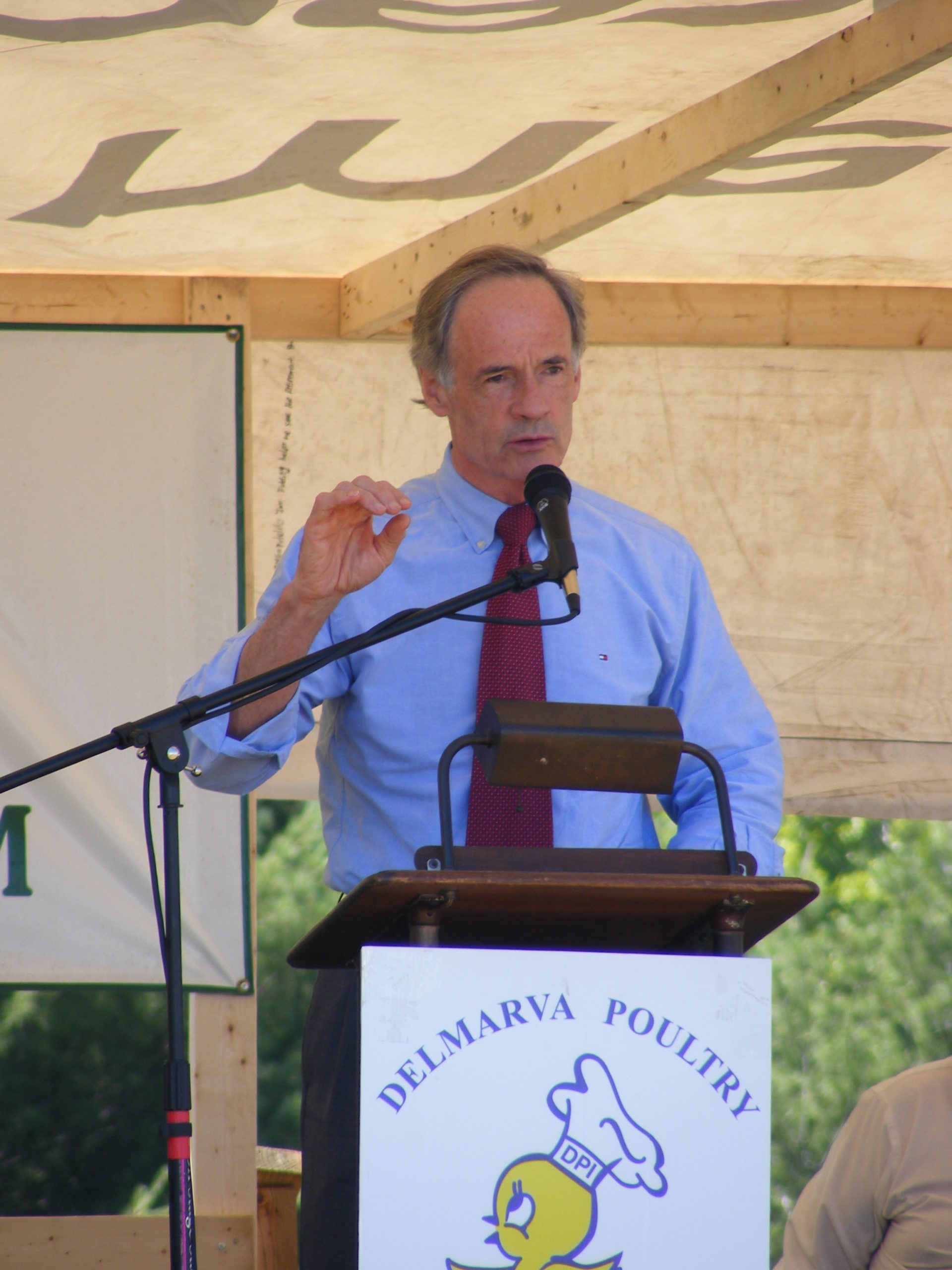 Leading off the proceedings was Senator Tom Carper from Delaware, who sent the regards for many of his colleagues on the Hill, including fellow Senators Coons, Cardin, and Mikulski. Carper stated the government has many roles to play, but they did not create jobs. Instead, their task was “nurturing the environment for job creation.”

Carper went on to talk about opening up foreign markets to agricultural products, in particular focusing on Mexico, Russia, and China, which was accessed through Hong Kong. He claimed President Obama has been “very forceful” in trying to open up new markets to agriculture in general and poultry in particular. Carper claimed that 80 percent of Delaware’s agricultural business is poultry, and with plenty of Mountaire chicken being cooked on the premises that figure doesn’t seem to be a stretch.

Another interesting tidbit from Carper was his assessment that poultry interests had achieved a success in eliminating both the ethanol tax credit and foreign tariff. This was considered a success because over half the cost of raising a chicken comes from feeding it. I have to agree that corn should be grown for food, not fuel. 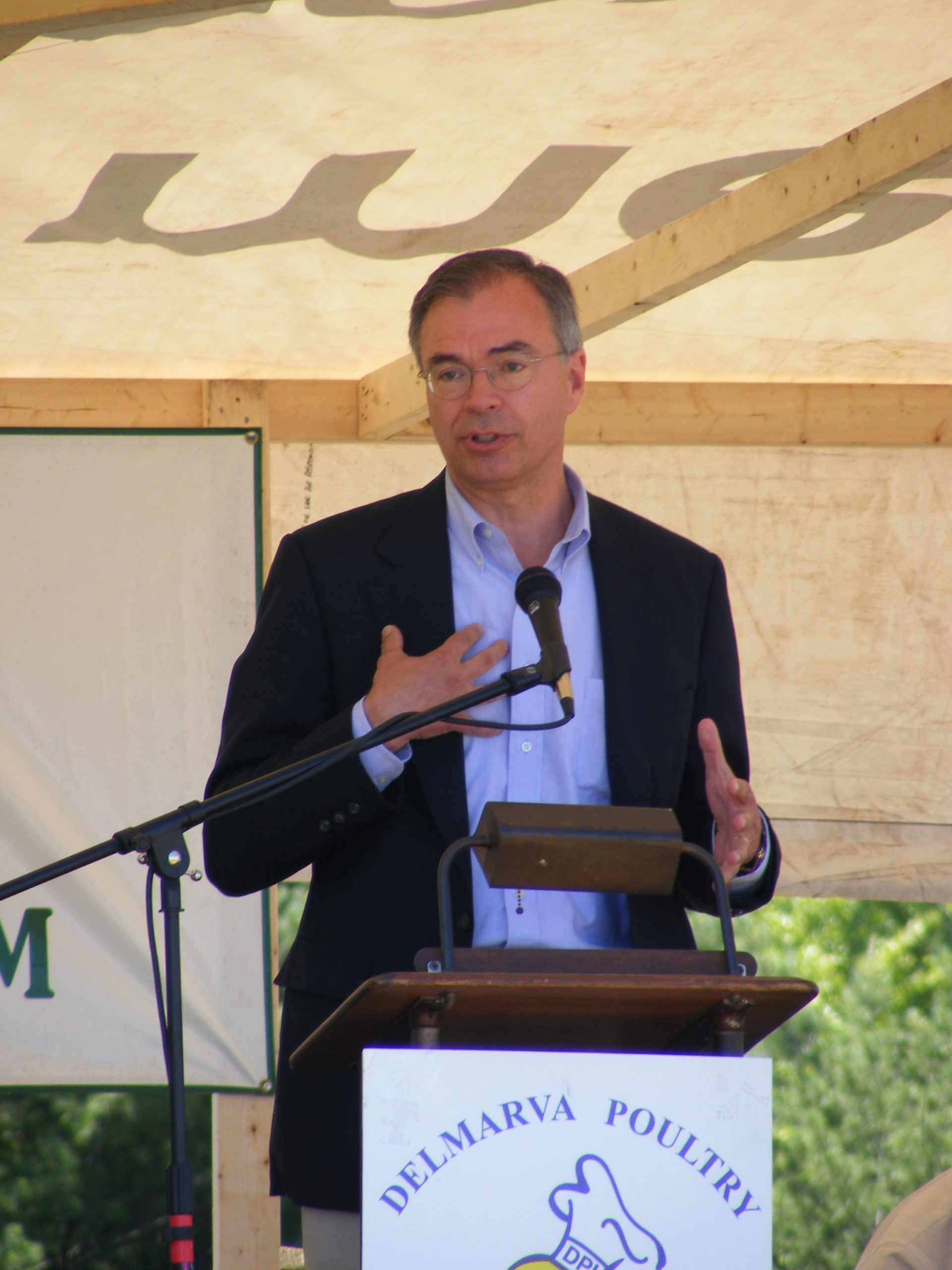 Compared to Senator Carper, Rep. Andy Harris spoke quite briefly, believing “we should thank God for the poultry industry” and arguing that federal regulations are killing the poultry industry. “We get the message” from farmers who want the government off their back, said Harris.

There was a little bit of friendly rivalry between the two agriculture secretaries. 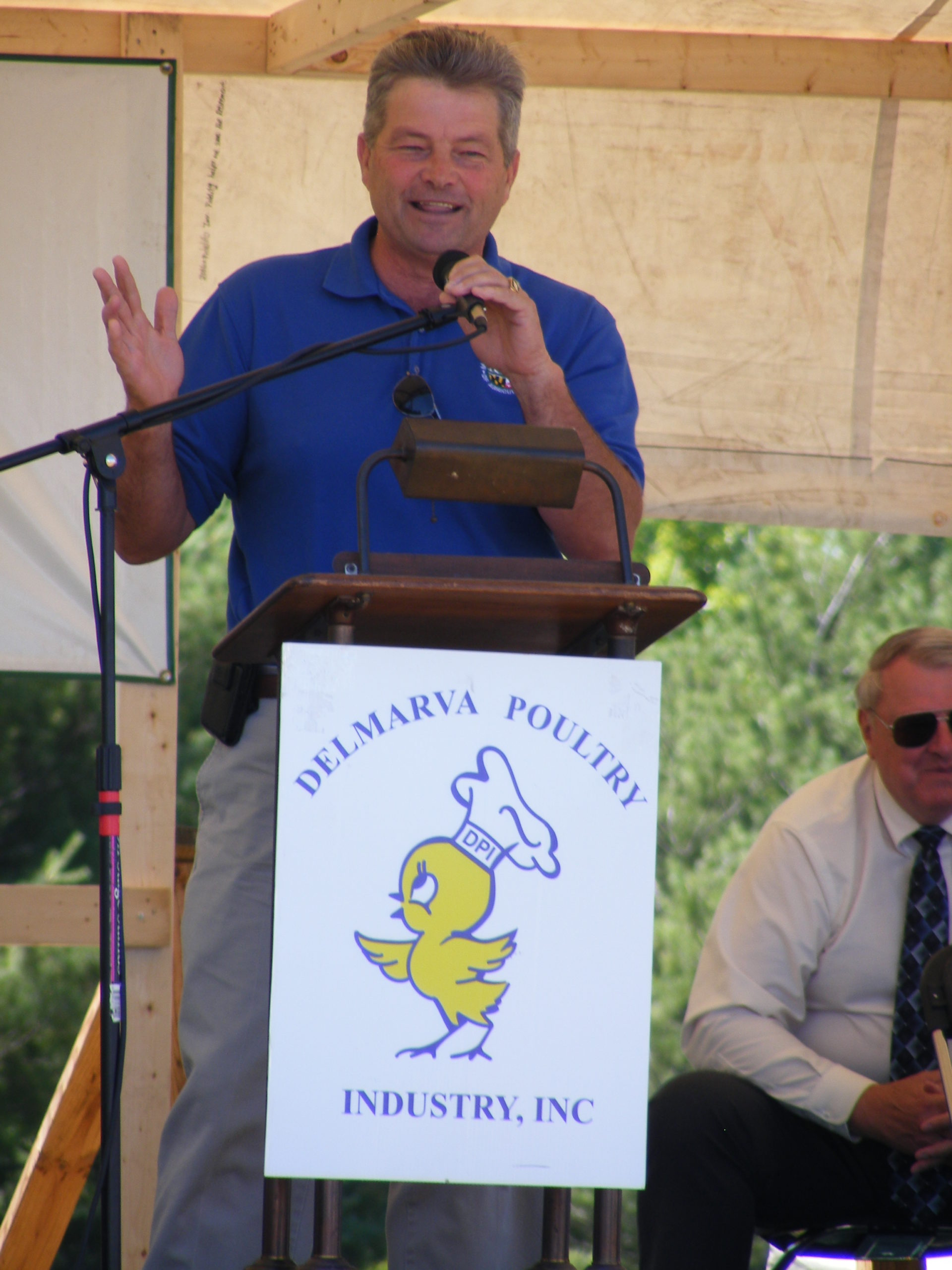 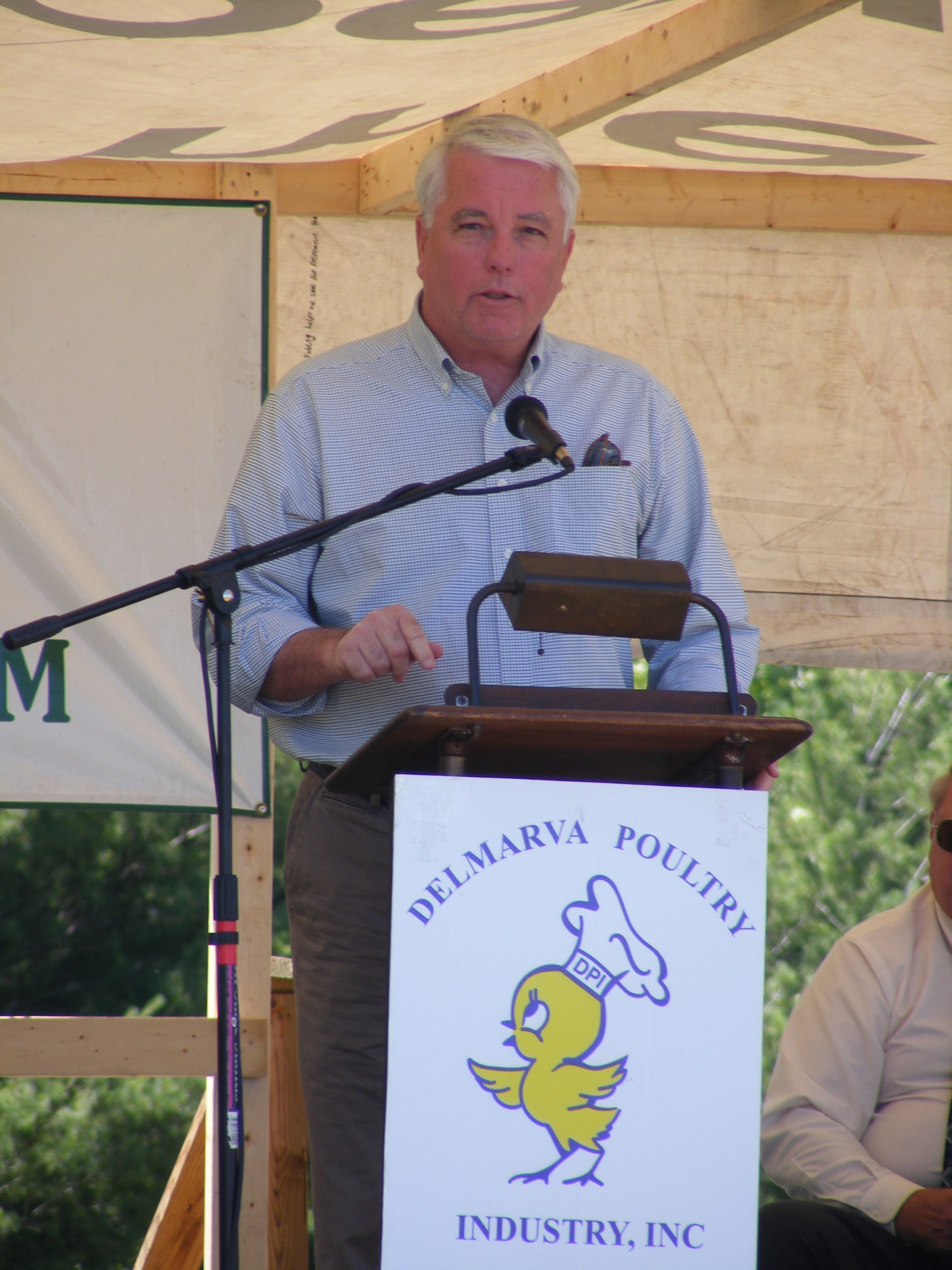 Ed Kee of Delaware welcomed us to southern Sussex County, joking there was a bill in Delaware to annex the remainder of Delmarva to the state. (Some of us wouldn’t mind – politically a greater Delaware incorporating the Eastern Shore would likely be at worst a swing state and possibly a “red” one.) But Kee made the great observation that “the best environmentalists are the farmers.” (If I may add my own observation: I don’t know what political conditions are like in Dover, but that’s something surely lost on Annapolis.) 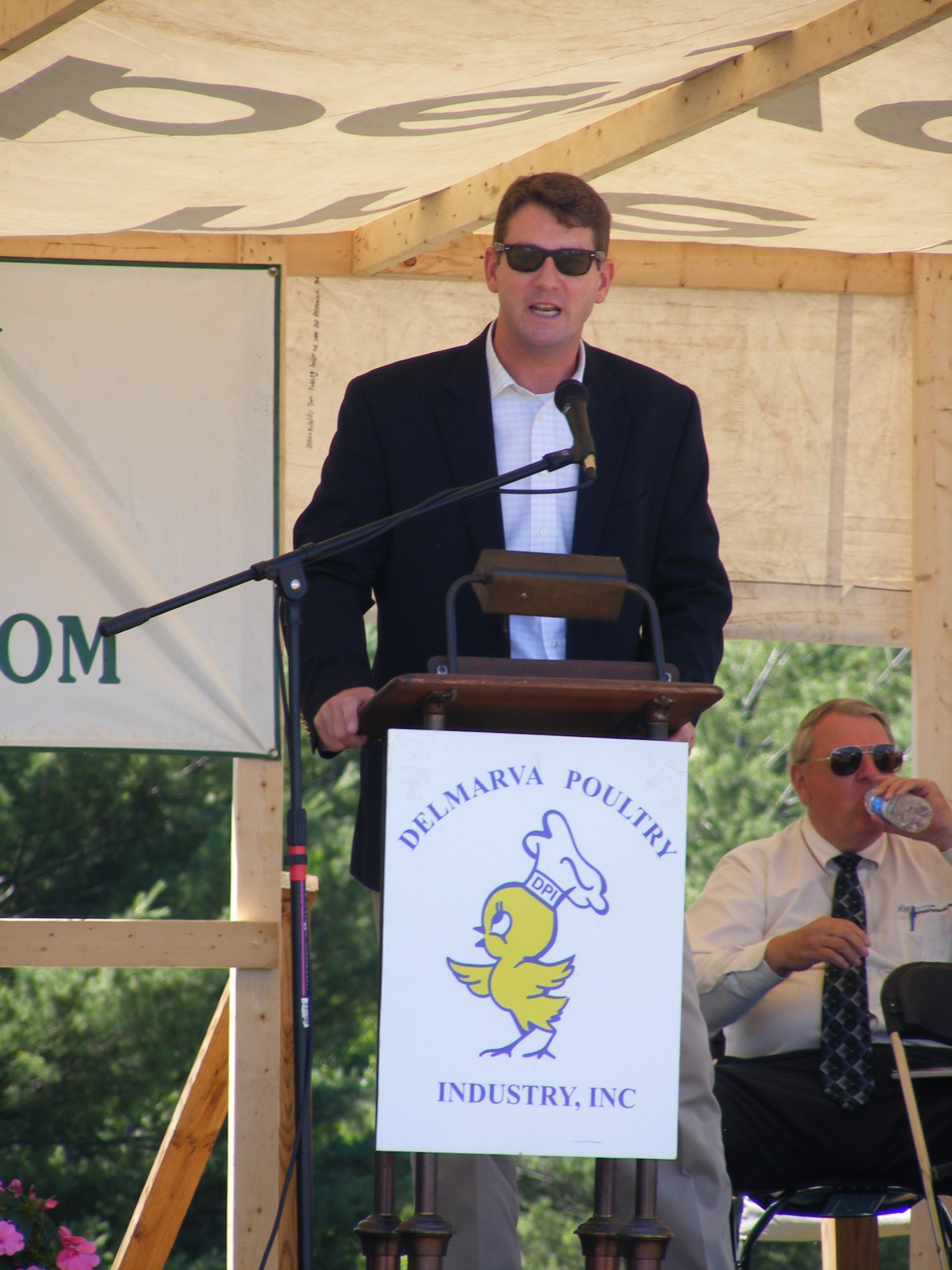 The last political word went to Salisbury Mayor Jim Ireton, who welcomed the festival to Salisbury and called our fair city one which knows the importance of the agricultural industry. He also promised “we will do everything we can to keep Perdue here.”

So that was what was said. It’s also worth stating that a large segment of local legislators were representing themselves at the festival. From the city of Salisbury were Ireton and City Council member Laura Mitchell, and Wicomico County’s delegation from County Council numbered six of the seven (missing was at-large Council member Matt Holloway.) Similarly, state Delegates Addie Eckardt, Charles Otto and Mike McDermott stopped in as well as both local Senators, Rich Colburn and Jim Mathias, the one Democrat who stopped by the GOP tent to say hello. As well, at least four local Delaware state legislators were present.

I was also told that Congressional candidate Wendy Rosen was there along with Harris, but since I wouldn’t know her by face I can’t verify this. I do know that GOP U.S. Senate hopeful Dan Bongino will be at the festival tomorrow morning as part of an Eastern Shore campaign swing (he’s also stopping in Ocean City.) Hopefully he’s home this evening brushing up on poultry concerns, although if he speaks to Carper and Harris he could get a reasonable primer with the exception of the Obama remark by Senator Carper.

I’m told next year’s event will be in Snow Hill, so GOP hopefuls for state offices should notate their calendars now for a trip to Worcester County in mid-June, 2013. Just because it’s an odd-numbered year doesn’t mean name recognition is unnecessary and smart candidates are out cultivating the base.

3 thoughts on “Political perspective on poultry”