More of the small stuff you love! Let’s begin with this.

Up in the Second Congressional District, GOP candidate Larry Smith is challenging his four rivals to eight hour-long debates on various issues. But considering he has more to gain than two of his rivals (who serve in the Maryland General Assembly) that’s probably a pipe dream – not to mention they would likely be in session several nights a week.

But the key complaint Smith has is simpler: “This election should not be decided on who has the most insider endorsements, but rather who would be the best representative of the voters of the district.” All that is true, but if these debates were to come to pass I would hope that a conservative runs them, rather than the debacles we have seen with the GOP Presidential debates and their “gotcha” questions.

I wish Mr. Smith the best of luck in going to Washington.

END_OF_DOCUMENT_TOKEN_TO_BE_REPLACED 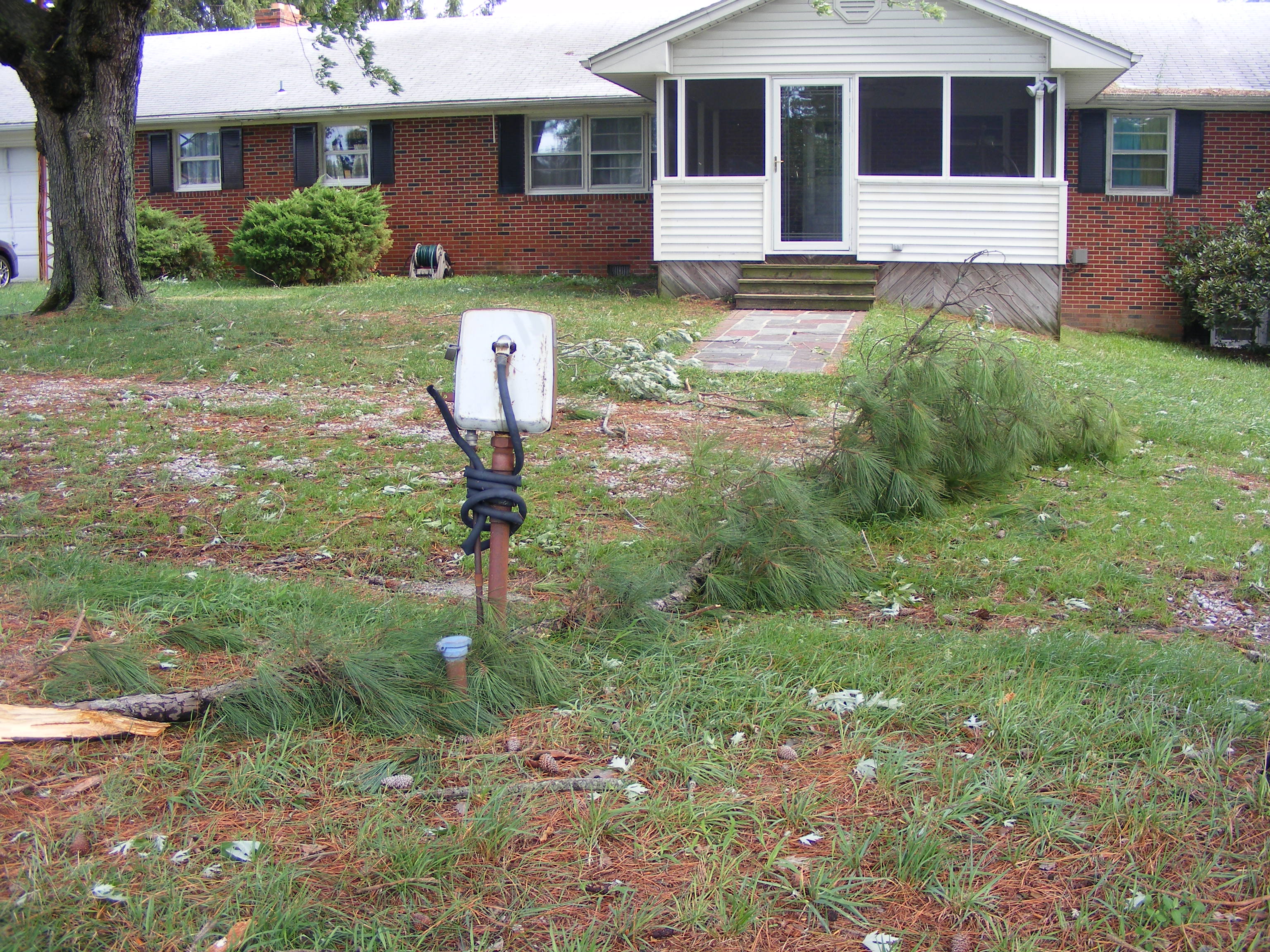 Well, we survived Irene. In all honesty, I think it’s blowing harder now at 11:00 in the morning than it did for a good chunk of last night.

By the way, that branch was the largest limb that fell in our yard. That’s important because normally I park my car there! Luckily, I had decided to move it right up by the garage to keep it out of the wind – and away from the row of pine trees.

It seems to me that this hurricane was very unusual insofar as I would expect hurricanes to be. I was expecting conditions to deteriorate as the eye drew closer, but it seems like the worst time of it was yesterday afternoon and early evening, several hours before the center of the storm came by. On the back side, the wind is howling outside at about the same amount of time after the eye of the hurricane passed. Granted, the closest experience I had to a storm before this was Ernesto a few years back. Aside from the duration of the event, Irene’s effects seemed comparable to me.

Yet the sizzle didn’t match the steak. I’ve been glued to the Weather Channel for a couple days trying to see what would happen, but all they seemed to talk about was North Carolina (naturally, since the hurricane was supposed to make landfall there) and New Jersey/New York City. Okay, that’s a major center of population. But they didn’t send anyone to Ocean City and didn’t make much of an effort to pinpoint when Irene would affect us. I got more information from our local news than the channel which is supposed to be “the hurricane experts.”

Hopefully everyone within the reach of my words had a similar story to mine – other than a little water in the basement, the few branches down, and a bit of a flashing failure on my chimney (we had water running down the front of our fireplace, which faces east into the wind) we got through this just fine. My significant other even went to a wedding yesterday afternoon and we never lost our power.

So now I guess I can dump the pot of water we left on the stove, drain the bathtub we filled in case we needed to flush the toilet, and place the dozen or so plastic ice bags we made into the garage freezer. Oh, and eventually move my car back now that I dragged that branch out of the driveway and take the basement furniture off the blocks. So it’s another busy day about these parts.

Because of the weather conditions and the prospect I’m not going to have power, you probably won’t see new posts here until Monday.

As of right now, the Salisbury area is expecting the peak of the storm to hit about 2 a.m. Sunday, with sustained winds of 54 miles per hour. We could get 6″ of rain or more as well. Over in Ocean City, their sustained winds would be 67 m.p.h. – just short of hurricane strength, but certainly enough to do plenty of damage (not to mention the 6′ storm surge.) From my days in the architectural field, I recall that now mechanical and electrical units have to be set at 8′ above sea level, so it’s going to be very likely buildings may see significant damage in that regard too if the surge is just a bit higher.

We are pretty much as prepared as we will be; luckily it seems that the storm is weakening a bit more than first thought. Still, it’s going to be awhile (if ever) that we will be back to ‘normal.’

Oh, one other piece of good news: it’s likely we’ll never have to go through a Hurricane Irene again. Major hurricanes which affect large areas have their names retired, so the next cycle will have a new female “I” name. But what is it about “I” hurricanes? Isabel, Ike, and now Irene have been very damaging storms the last few years.

By the way, I have no clue why my website has been down from time to time. I’ve asked my server company to investigate but it’s one of those sporadic outages which drive me nuts.