Because there isn’t a whole lot of interest yet in the race, polling from reliable sources doesn’t exist yet in the Maryland gubernatorial primaries. Since none of us are privy to internal polling done by the campaigns – if someone is, he or she’s not talking – two state websites have attempted to step into the breach: the old reliable Red Maryland and the upstart Red White and Blue.

In both cases, their polls show a spirited three-way race, with David Craig holding a 7.5 point edge over Ron George on the Red Maryland poll. But on the RWB poll, Charles Lollar leads by 4 points over Craig.

Having done polls myself, I know the results are rife with manipulation, as the campaigns exhort their supporters to vote in the respective polls to make their cause look better. A victory in these polls can prove to be a little lift in the real polls, as success tends to breed success.

However, I approach these with the theory that the more passionate supporters who would vote in these internet ballots exist in rough proportion to those found in real life, so I accept the idea that it’s a three-way race. A simple averaging of the polls in question would put David Craig at 33%, Charles Lollar at 30%, and Ron George at 23%, with the rest supporting one of the other candidates. As it turns out, the numbers for Craig and George are fairly consistent on both sites, but Lollar’s fluctuates by 16 points between the two.

Yet if you do a little digging into the actual numbers as I have, you may find that these polls are perhaps propping up one of the contenders to an outsized extent. The RWB poll is better for calculating this because the numbers are broken down not just by county in percentages, but the actual number of votes cast for each county. Unfortunately, the Red Maryland poll doesn’t provide the same crosstabs, but it does break down responses by county enough so I can make an educated guess as to how things really are.

Let’s begin with the obvious: there are three counties which are ridiculously oversampled in both polls, and all of them directly benefit two of the candidates. Both Harford and Talbot counties favor David Craig in an outsized manner, which is natural because Craig is Harford County Executive and running mate Jeannie Haddaway-Riccio comes from Talbot. The other county is Anne Arundel, which benefits Ron George as he represents a portion of that county.

As it turns out, Anne Arundel (and to a lesser extent, Harford) are so oversampled that they suck the oxygen out of a number of counties – many of which tend to favor Charles Lollar. Out of nine counties significantly undersampled on the two polls, Lollar carries six of them, Craig two, and George one.

So when I adjusted the data to fit a more realistic turnout model (based on the RWB poll results, which featured the necessary raw data) I found that Lollar picked up four points, Craig lost four, and George (somewhat surprisingly) gained one. If you made that adjustment to the Red Maryland poll, you literally have a three-way battle which is anyone’s to win: Craig 28%, Lollar 26%, and George 25%. On the RWB poll, Lollar would have a commanding 42%-30% lead over Craig, with George lagging behind at 23%.

Truthfully, I don’t think Charles Lollar has 42% of the vote right now, but I don’t see him as third place either. At this stage in the game, it’s all about getting activists and volunteers, and I can give you an example from the Farm and Home Show this past weekend.

You may recall these pictures from my Facebook page: 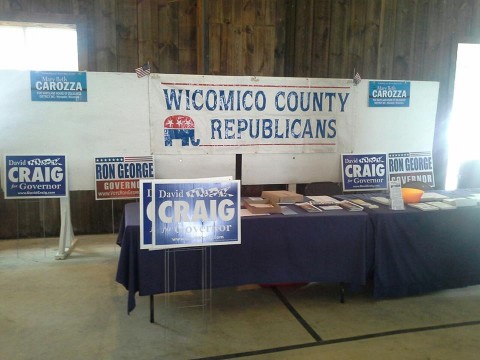 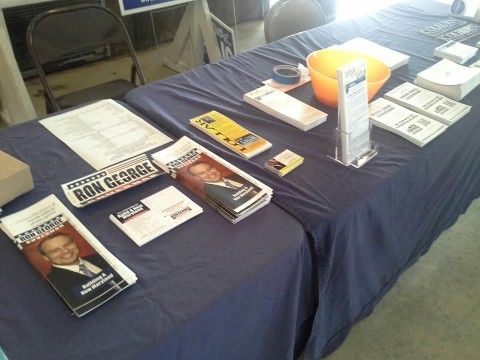 I can tell you that the David Craig signs in the top photo and the literature on the upper right edge of the bottom photo all came courtesy of Craig’s county coordinator, who was my second volunteer of the weekend Thursday night and already there with bells on when I came by to check after work; she was an hour early for her shift.

The Ron George signs came courtesy of the candidate himself, as he stopped by sometime Friday to drop them off. I had some Ron George literature sent to me prior to the event, but it appears to be supplemented by the inserts; moreover, I had no bumper stickers or palm cards when I started. I do now.

Meanwhile, the yellow Charles Lollar palm cards and business cards in the middle of the second photo came via a volunteer who took time out of her trip to the beach to drop them off on Friday. (She would have also brought a big sign, but I advised her against it.) Now that’s dedication, and that’s why it’s important to get an early start on a campaign so the word can be spread.

So perhaps these are the polls of activists, but if Ron George only has support in Anne Arundel County and David Craig rests on his laurels assuming the Baltimore area is his, they may not even make it to the primary when there’s the possibility of Larry Hogan and Michael Steele to consider. I don’t see both of them entering the race, but one of the two may make the field too large to support. Worth noting, though, is even if Michael Steele took his 6% support in the Red Maryland poll, added the entirety of the undecided, and got the Blaine Young supporters to back him, he would still be fourth.

That would be the penalty of getting into the race late, banking on name recognition but not having the grassroots support needed for victory at the polls. Money can do a lot, but it can’t always win – otherwise we’d have a new Senator named Rob Sobhani.

On a completely unrelated note, you are reading post number 3,500 in the series I call monoblogue, Not bad for nearly eight years of work, you think?