When I finally arrived in Timonium, a good 45 minutes or so after beginning the stop-and-go battle with I-695 traffic that made me thankful I toil in the Salisbury environs, I knew I was at the right place almost immediately. 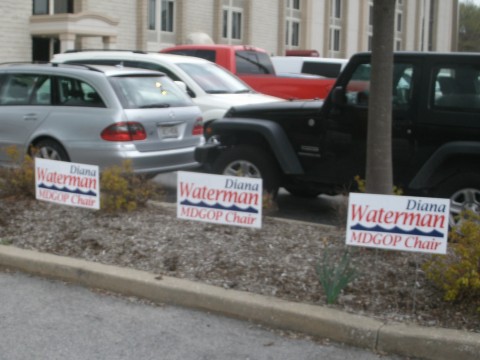 But not 15 seconds after I grabbed my bags and headed over to check in, I was greeted by these fine folks doing an old-fashioned sign wave. 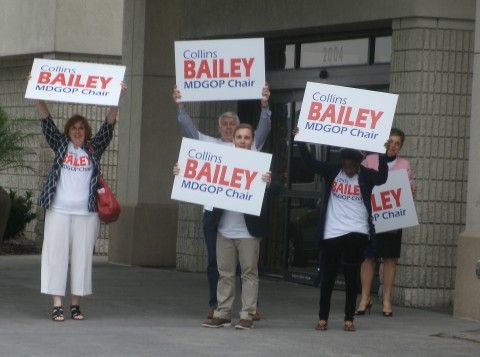 So the battle was somewhat joined. And the Bailey forces weren’t deterred by the rain which began just after I arrived – they just moved inside, to the spacious Crowne Plaza lobby. 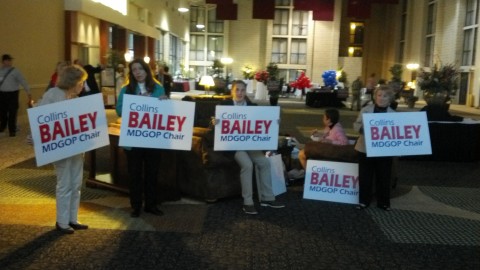 In the meantime, the people putting Blaine Young’s party together were in the middle of their setup, which included this “can’t miss” signage. 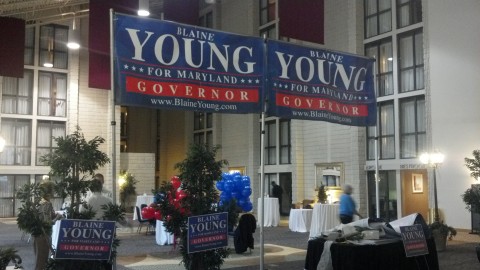 Having checked in and after immediately running into old friends in the lobby, I went to my room to freshen up and prepare for the Executive Committee meeting. I was told the Baltimore County suite would be opening first, so I was hoping to grab a bite to eat and say hello to those I knew therein. 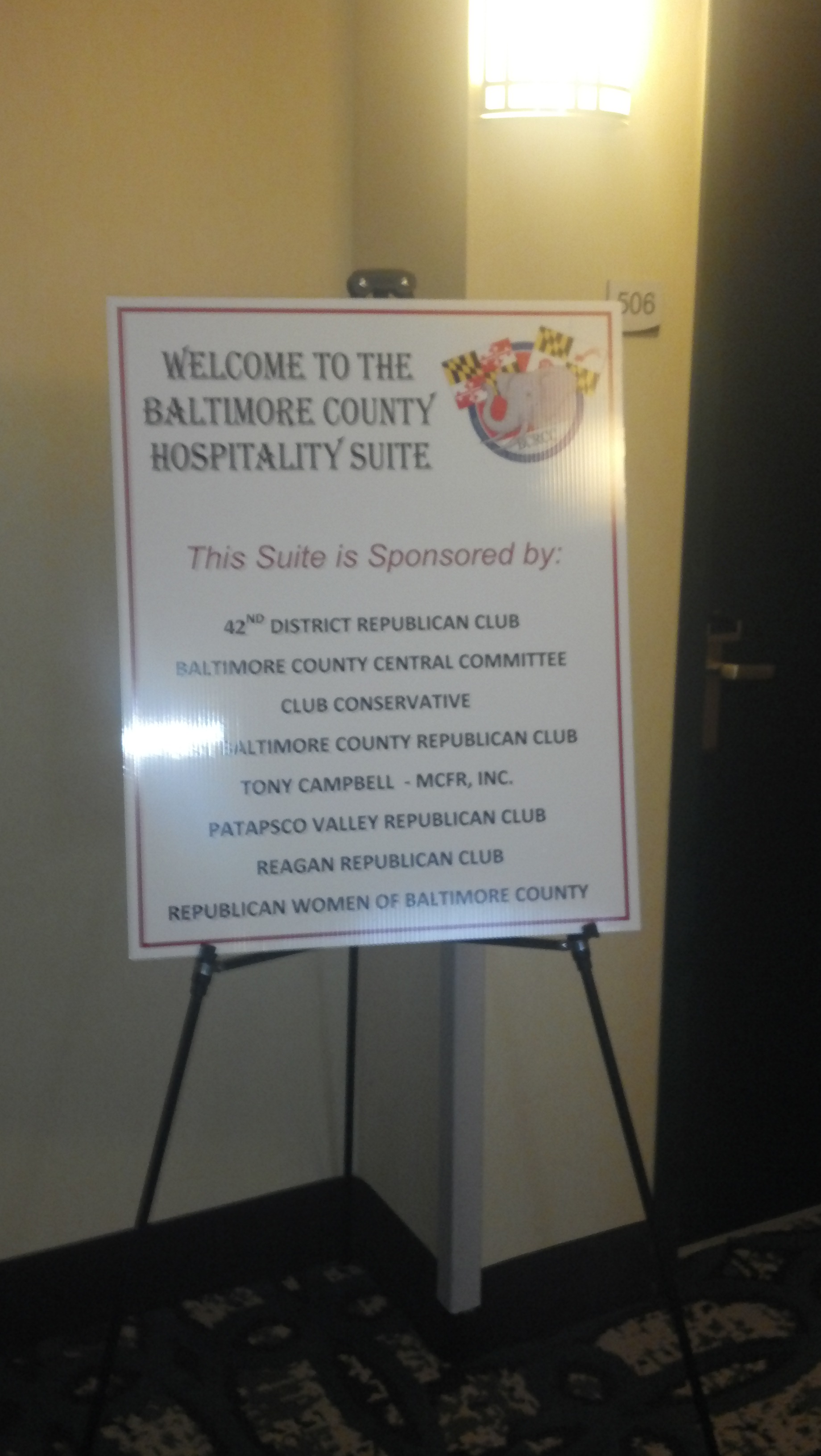 But they weren’t quite open yet, and by the time I got back they were closing (more on that later.)

However, there was another suite with plenty of food available, perhaps the best selection. This was the Draft Charles Lollar suite, and although I didn’t get to say hello to the man himself, I will show that he had a nice spread of giveaway items, including several pocket Constitutions. 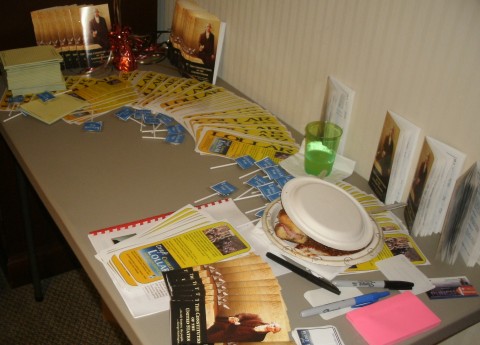 Alas, I did not get to add this bad boy to my collection. Instead, I retained the useless collection of losing raffle tickets I have paid for over the years. 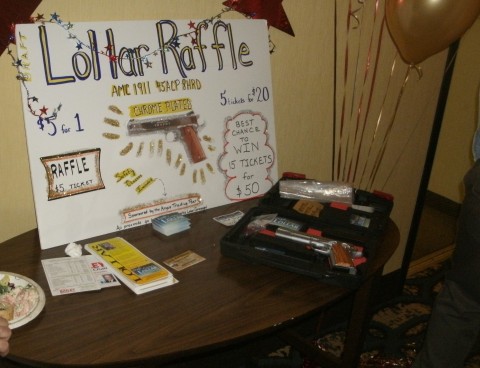 On my way down to the Executive Committee meeting, I happened by the setting up of the Maryland Liberty PAC suite. As they did last fall, they had a lot of books for sale. Not sure about the flags, though. 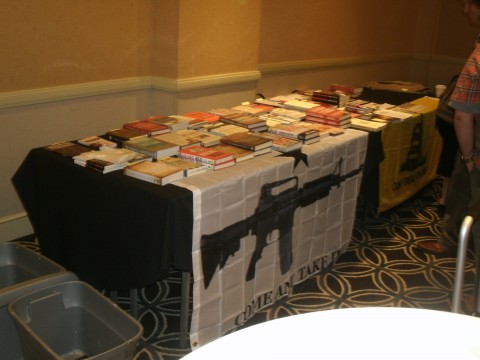 They also were on the Bailey bandwagon, showing their support. 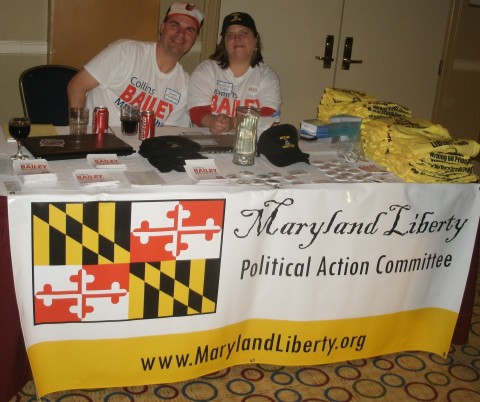 To me, it didn’t seem like there were nearly as many vendor tables as there were at past events. There was one with bundles and bundles of the red convention tote bags, but the only other one I noticed was the Stratgeic Victory Consulting table sitting there all forlorn. 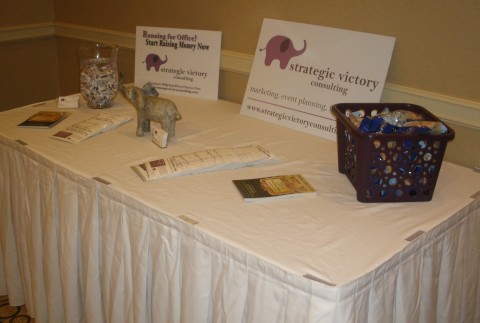 One piece of advice for the nice ladies who run SVC – you need fresher peanuts.

We may need a fresher approach to the Executive Committee meeting, which began several minutes late. 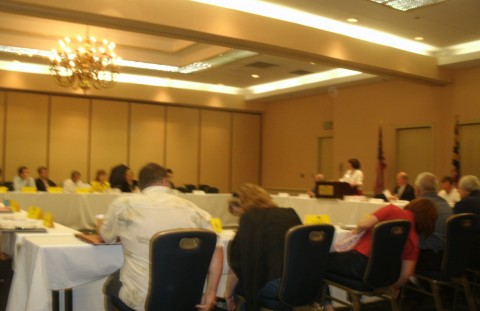 It began well enough: Chair Diana Waterman asked for a moment of silence for the Boston bombing victims. But her report didn’t shed a lot of new light, as she recalled the “wonderful event” of the Reagan gala back in February and noted her predecessor resigned, “moving on to other endeavors.”

Looking at current events, Diana noted our Red, White, and Blue Dinner will be held June 20 with Paul Ryan as featured speaker, and proclaimed the Pathfinders program was “going strong.”

Nicolee Ambrose, in her National Committeewoman report, spoke about efforts on both the state and national levels to engage voters and train volunteers. On the state level, the Super Saturday program would return in an effort to register new voters. Saturday morning, she continued, would give activists an opportunity to learn about the new voter registration rules in the state.

On the national front, Nicolee spoke briefly about “another incremental step” in reworking the RNC rules but conceded “there is much to be done.”

Diana Waterman chimed in during Nicolee’s remarks regarding the voter registration efforts to point out that we were working on data services for our counties.

In his National Committeewoman report, Louis Pope gushed that he was “excited about our prospects…(after this weekend) we will go back to unity.” He spoke about the recent RNC meeting in Hollywood, joking that “we decided to invade their territory.” Included among those who addressed the event, Louis continued, were Michael Reagan, Dick Chaney, and Allen West. The party also discussed outreach with Asian and Hispanic leaders as well as CPAC speaker Mia Love. “Republicans need to get into their sphere,” warned Pope. The party was embracing ideas for change, but also was in the process of “internal soul-searching.”

Louis also talked briefly about the RNC rules, noting it was “pretty cool” that people were reading them. He also commented on being named to the leadership of the party’s Northeast region, an area where “Republican prospects are certainly improving.”

The main thrust of Brian Griffiths’ YR report was to stress how we should “put our best foot forward” in two key municipal races: Annapolis and Frederick. He was “really excited” about prospects in Frederick, where a number of young Republicans are seeking alderman posts.

Fiona Moodie, representing the College Republicans, made the case for giving her body and the Young Republicans a vote on the Executive Committee. Those adjunct organizations would join the Maryland Federation of Republican Women, who already have their vote.

Amidst the various county reports, one point which was brought up was the concept of regional gatherings or conventions similar to the one Montgomery County has. Obviously the smaller counties could team up to have enough of a critical mass to make them worthwhile.

On my way back from the Executive Committee meeting, which went into a quick closed session to discuss the budget, I stopped to check out David Craig’s room. 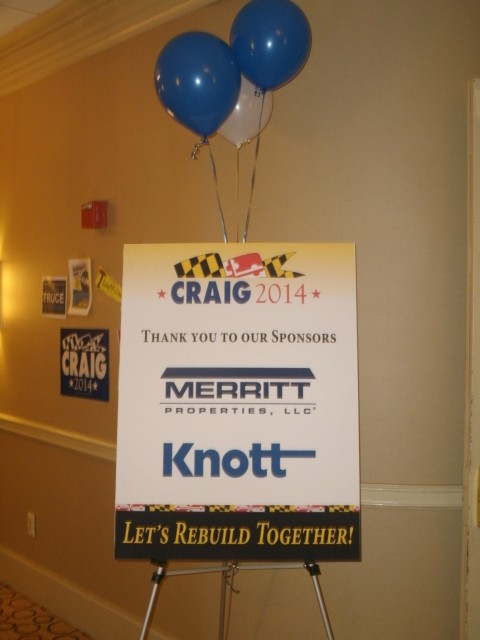 Surprisingly to me, there was plenty of room to move around. 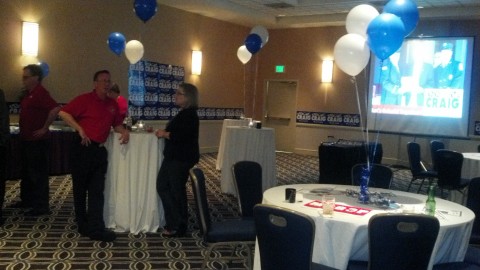 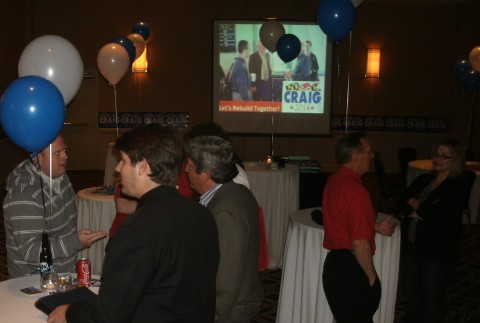 By contrast, I walked next door to the Maryland Liberty PAC room and found a large group of passionate activists. 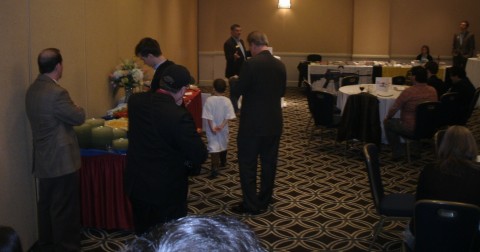 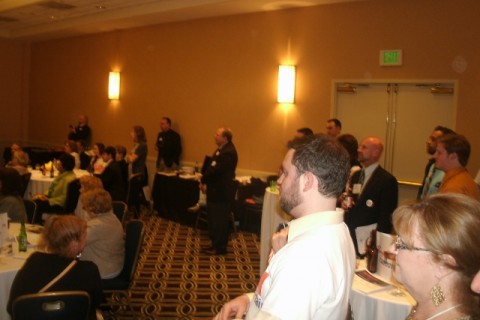 Arguably, it was the most lively of any hospitality suite although I will concede I didn’t stop by all of them.

At the time I walked in, Carroll County Commissioner Richard Rothschild was speaking on the idea of nullification. 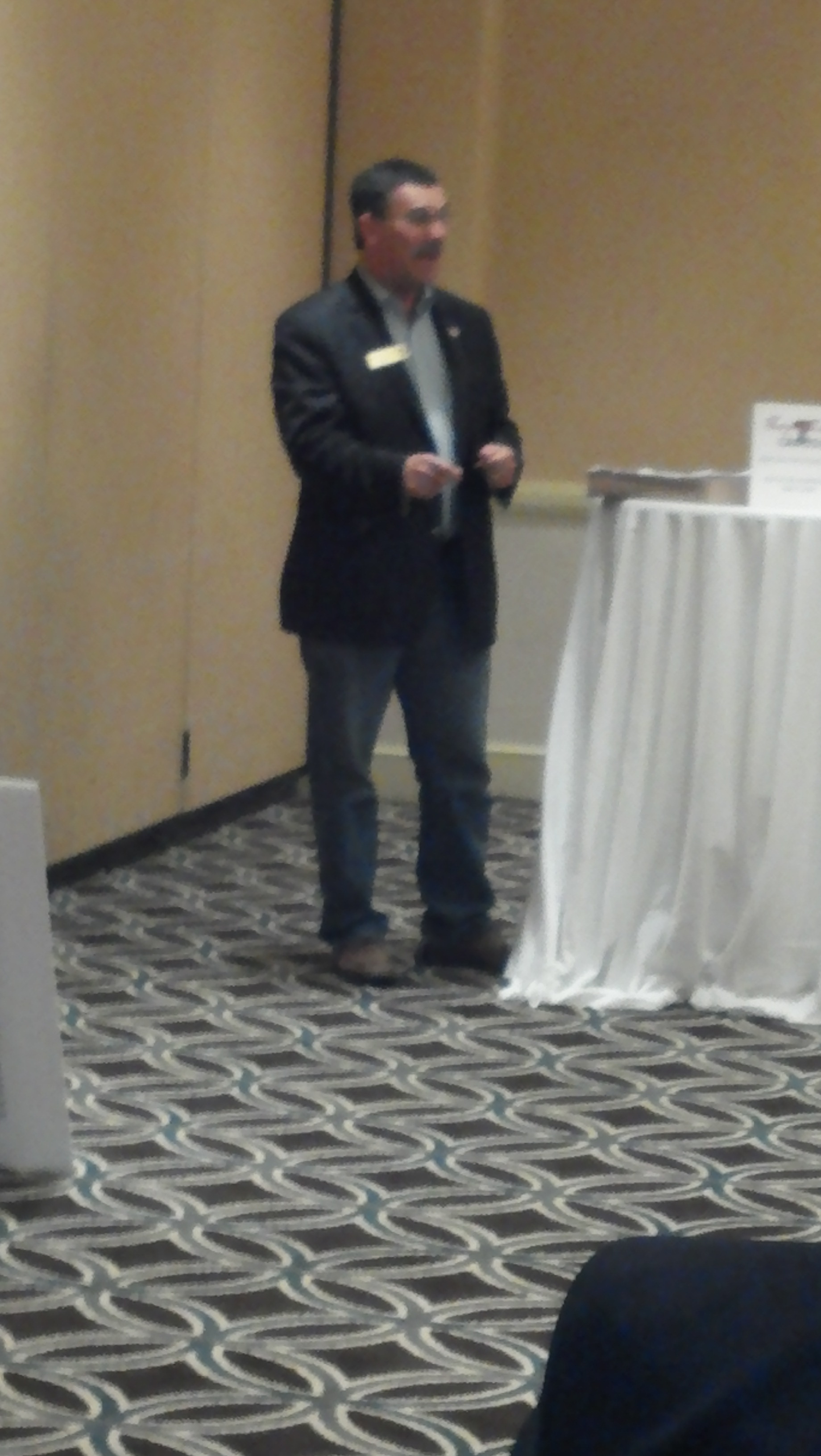 “I don’t think Martin O’Malley wants a dozen counties not following his orders,” Rothschild exclaimed. He is working on a blueprint ordinance for counties to resist the gun ordinance.

Outside of the Liberty PAC gathering, gubernatorial hopeful Blaine Young was wooing supporters with a fancy setup. 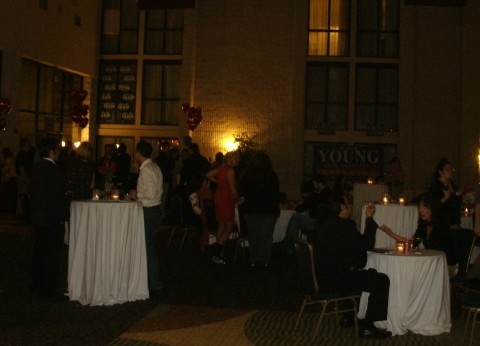 (Yes, the photo is dark. Not much light in there.)

For a second, though, I thought I ended up on the set of “The Bachelor.” 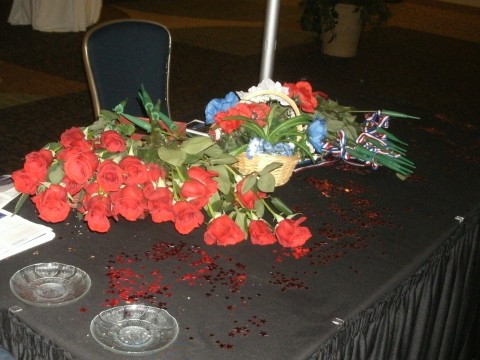 As it turns out, these roses were for the women who came in. As an added touch, each table was named after a leading female activist in the party. This one I know very well. 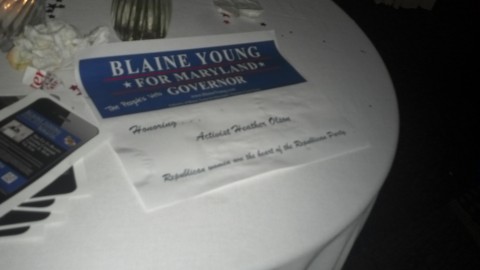 Yes, that would be my “partner in crime” Heather Olsen of Prince George’s County. We didn’t have much mischief cooked up for this rendition of the convention, but you never know what’s in the future…

My immediate future at that point was comprised of a lot of choices. 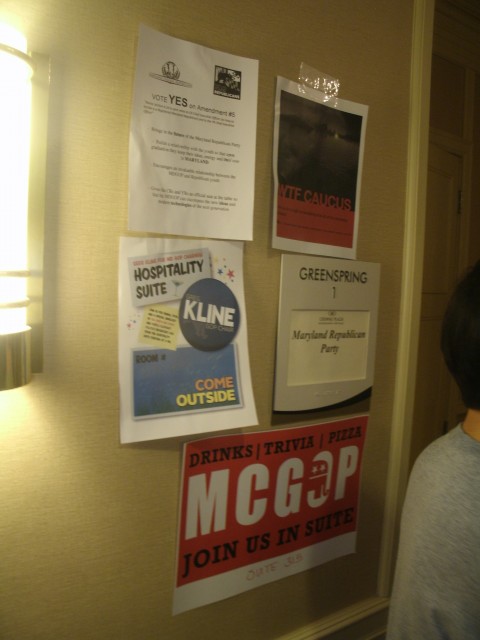 Even though I wasn’t supporting his bid for state Chair, I decided to pay a visit to Greg Kline’s combined suites, since those non-credentialed members of the new media were welcome there. 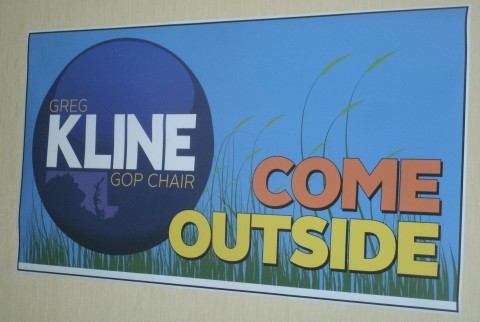 They were doing an episode of Red Maryland Radio (or Purple Elephant Politics, or both) as I came by. 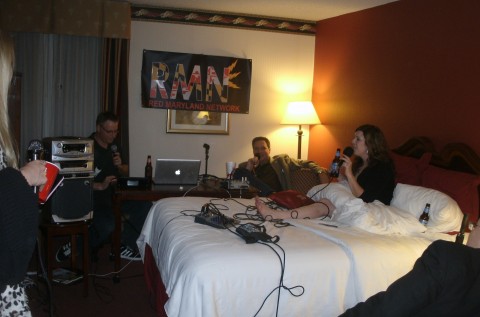 As it turned out, I got a little guest role when Jimmy Braswell asked me a question about this post on Greg Kline. I spoke my piece, he spoke his, and we basically agreed to disagree. I also found out my fellow Central Committee member Joe Collins is a radio natural.

But because I was having so many other interesting conversations there, I never made it to a number of suites. Granted, there were extenuating circumstances, such as the fact Baltimore County was packing up theirs as I arrived – apparently at the behest of the hotel.

You see, I was actually pretty surprised to find that several hospitality suites were along the same corridor as my room. Since the hotel hadn’t hosted an event such as ours, they apparently had a number of noise complaints – as one consequence, the Red Maryland radio crew had to turn off their speakers.

Anyway, I never made it back to the MoCo, Bongino, or Diana Waterman suites to see how their action was. But I did see Dan since he was a Red Maryland guest after I was.

And the Red Maryland crew had a special surprise for Jackie Wellfonder as the dubbed her the Maryland Blogger of the Year. (Jackie thought they were going to give it to me, I knew she would get it for her hard work.) As I tweeted:

WTG @princy_lyn: selected Maryland blogger of the year. The student has graduated.

After several hours of conversation and a couple adult beverages, I realized it was well after 1:00 in the morning, so it was time to put myself (and this part) to bed. Part 2 will be tomorrow morning.