Due to a prior commitment, I missed the April edition of Third Friday – which marked its return outdoors, where it thrives by being able to use the whole downtown plaza – but Friday evening turned out to be a winner weather-wise and because of that hundreds came out for this month’s edition of the event. 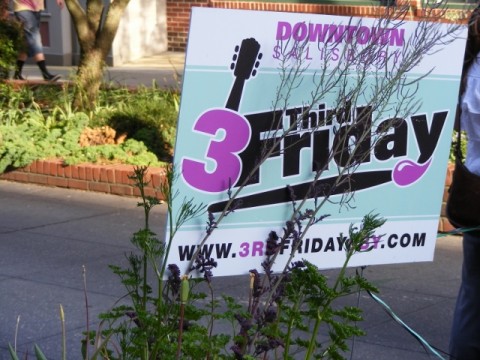 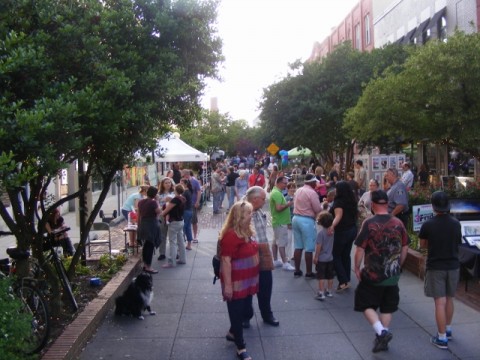 I had seen the crowd was a good one on approaching the event, but arriving on the Plaza it looked quite healthy. 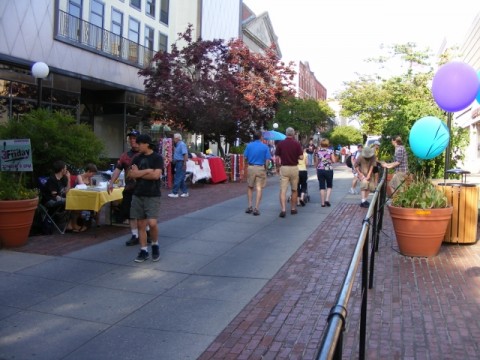 It didn’t hurt that my friends from Semiblind were playing down there. 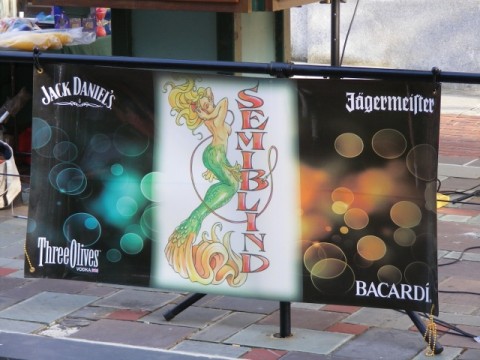 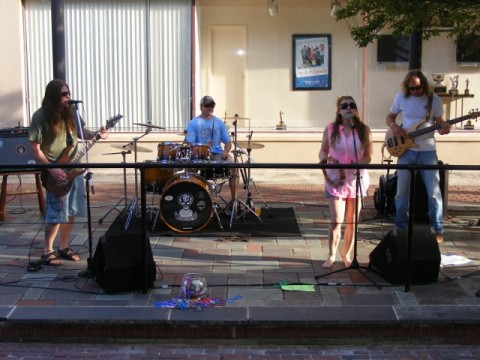 In and of itself, that’s not unheard of as they’ve played Third Friday before. But they seemed to lend a different flavor to the event you may not get with an acoustic act.

One big difference I noticed this year, though, is that the scope of the event seems a little smaller. If you look at that link, you’ll notice there were bands all the way down Main Street, but now the event seems to be concentrated just on the Plaza and the unit block of North Division Street.

In fact, there was a second band at the courthouse called the Edge-ucators but I didn’t make it over in time to catch them. There were other activities over there, though, which seemed to cater to kids and support the overall theme for the month of flight and things which go up in the air. As they said, “If it flings, flies, or floats… we are all about it!”

The open space of the courthouse yard lent itself to activities like disc golf as well. 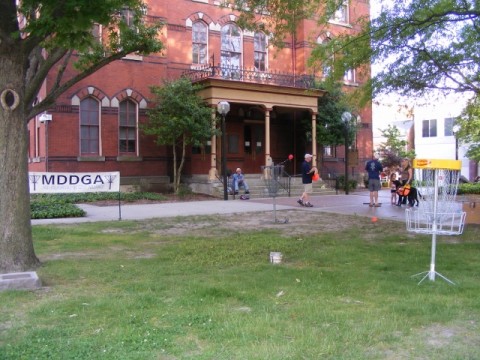 And the kids had their own little space. 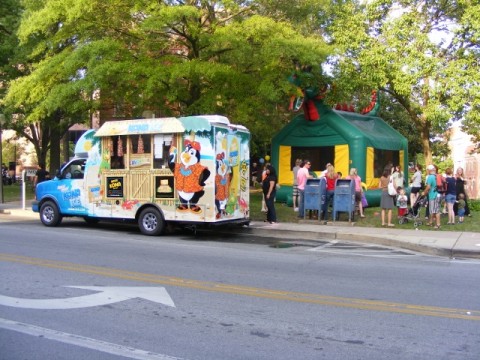 For the little ones, it was perfect: a bounce house, nearby snow cones, and plenty of sidewalk chalk. What else could a child want? 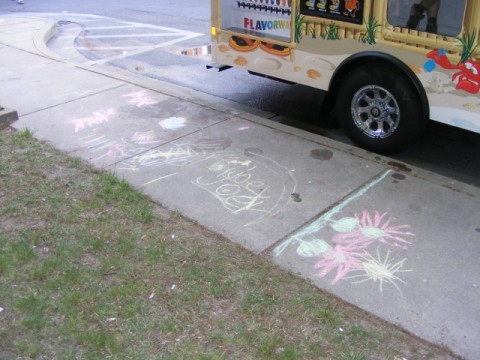 The local artistic community has also taken the event to heart, with Salisbury University getting in on the act by using a nearby building as exhibition space. Two new exhibits opened yesterday. 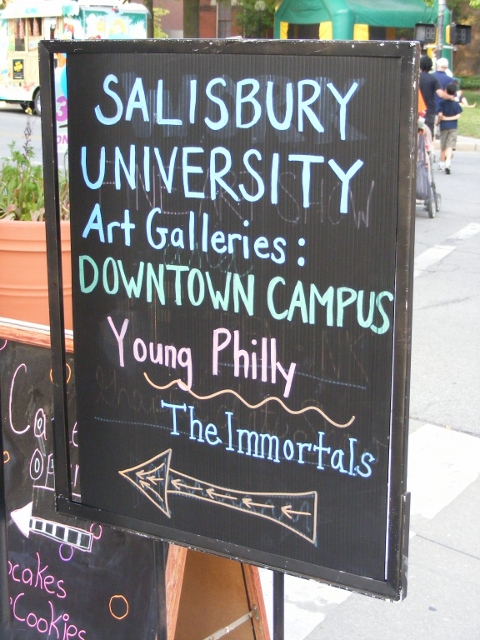 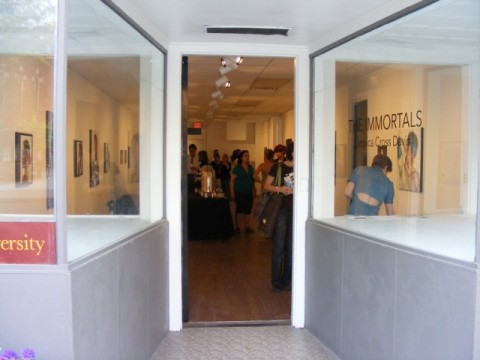 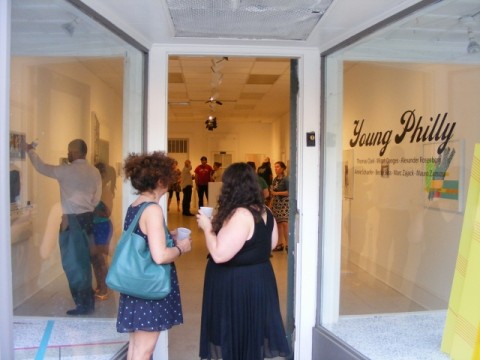 If you didn’t see “Immortals” and “Young Philly” yesterday, you have a little more time to check them out. 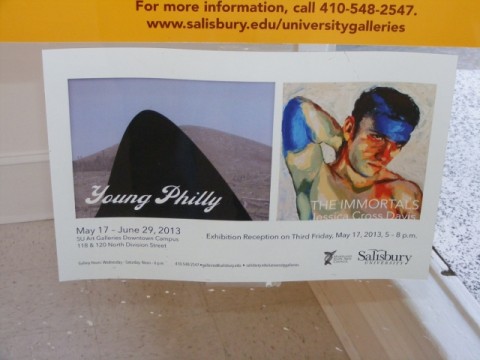 Let me just say I’m not an art critic and this question didn’t dawn on me until I went through my pictures this morning. But who actually sits at the exhibit during the time it is open? The artists? Seems like a lot of time out of a week to man an exhibit for 24 hours (Wednesday to Saturday 12-6, according to the flyer.)

Maybe if I went to this party I could find out. This is to benefit the fine folks at SWAC. 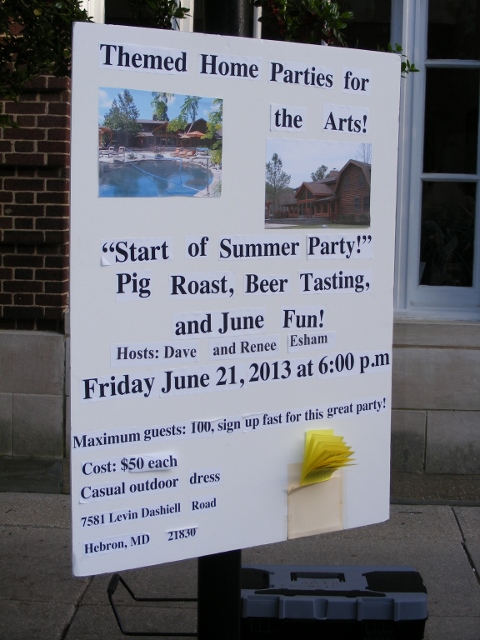 But accompanying the 3F theme of flight were several other exhibits. Posters similar to this were spread around the Plaza. 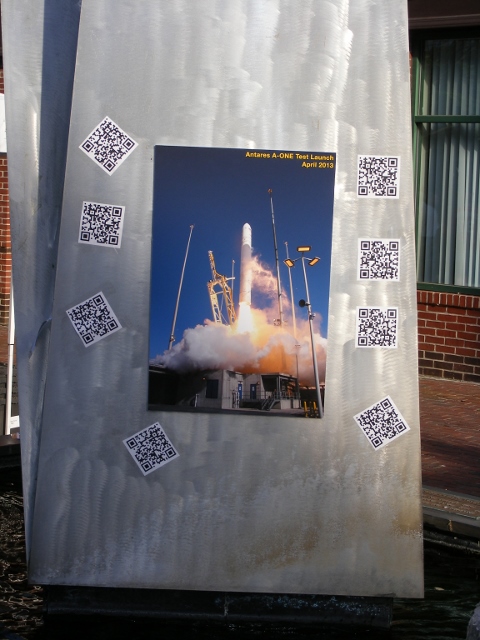 You could try your hand at making a paper airplane and seeing how far you could make it sail. 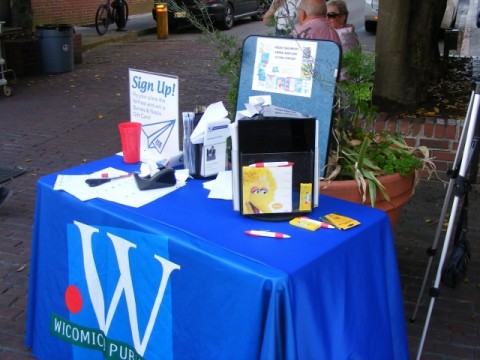 Even human-powered flight was encouraged. 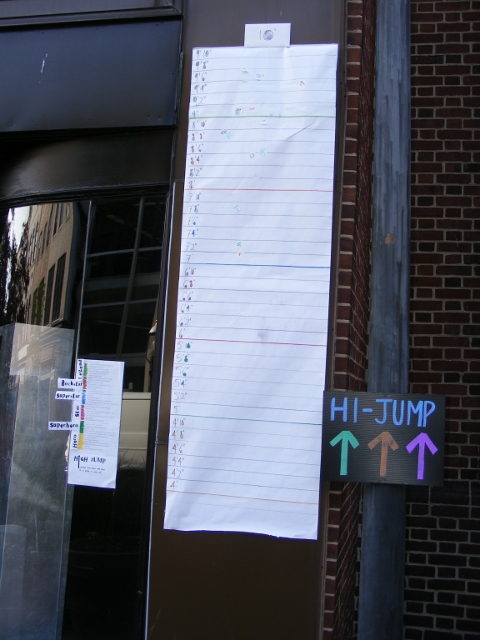 Salisbury Mayor Jim Ireton was contemplating this one. 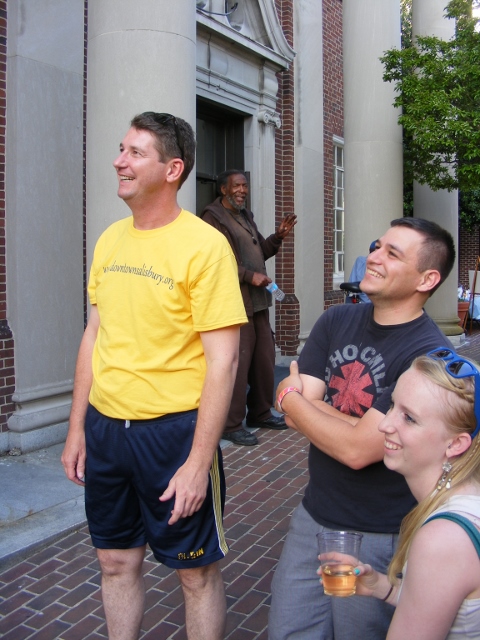 I can tell you he made it just shy of 9 feet. My bad knee and extra ballast left me a little short of 8.

But these guys were a draw without leaving their feet. 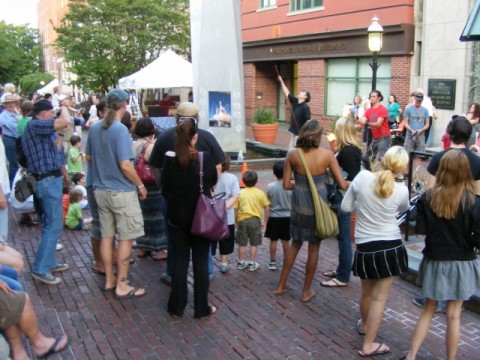 Why were they so successful? Well, there was the element of danger. 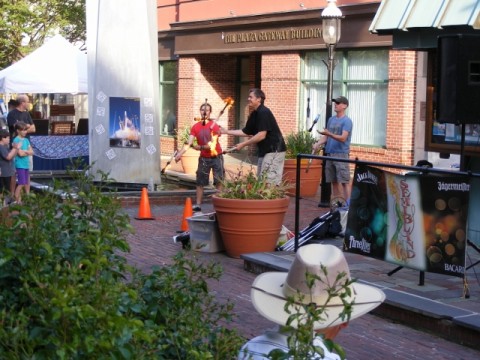 In all, the crowds seemed to hang around for the evening, making the Plaza a busy place. This picture was sort of random – I found the walking bush taking a rest! 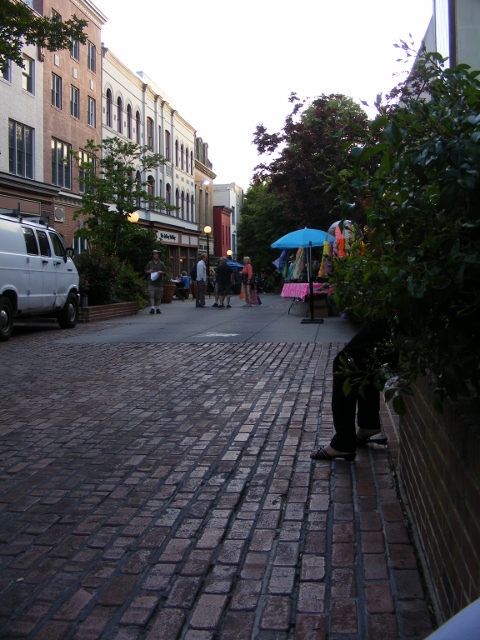 It wasn’t all fun and games, though. Shortly before Third Friday got underway, these two businesses had a ceremonial ribbon cutting. 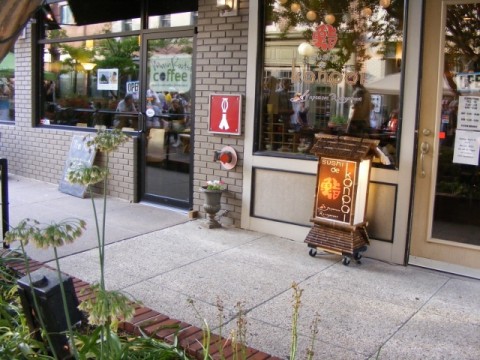 Both have been open for some time, but the local Chamber of Commerce wanted to give them an official sendoff.

As the evening progressed, the action began to shift to other places. 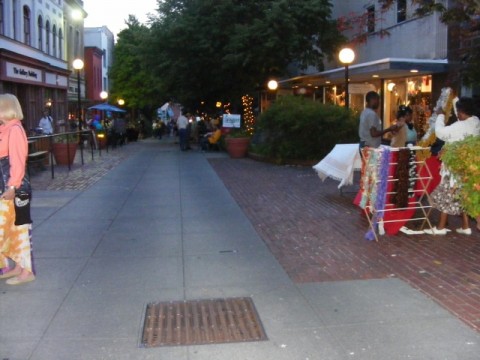 One eatery taking advantage of the weather and adjacent crowd was Roadie Joe’s, with a nice group of alfresco diners. 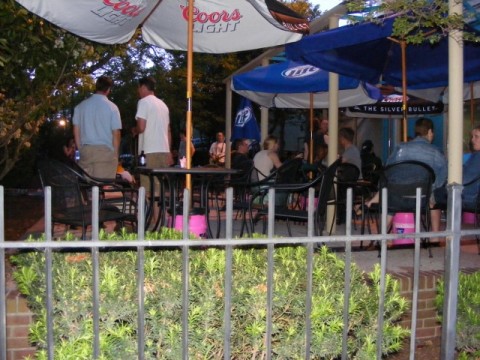 As it turned out, Kim and I enjoyed our late dinner outside at Roadie Joe’s as well, where Paul Brion was playing his final set of the evening. 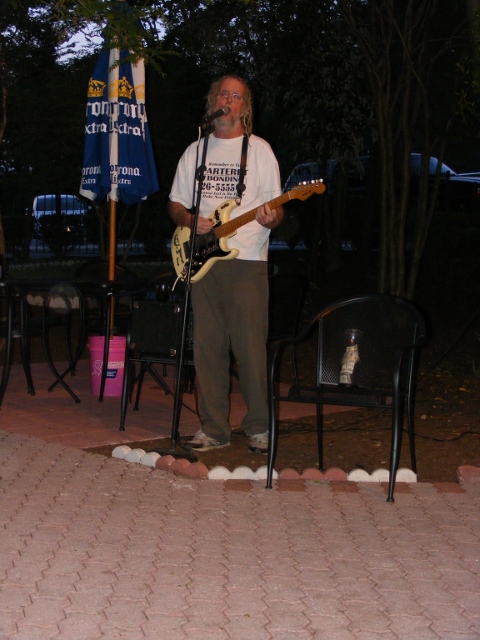 The food was great, although the service was a little bit slow. But if the idea was to allow us to enjoy our evening without leaving downtown Salisbury, mission accomplished.

There were a couple times I overheard people say something along the lines of “I wish they did this more often.” I understand that part of the attraction of Third Friday is its uniqueness on the calendar, since it’s a single day each month where people can plan on enjoying downtown Salisbury. But in order to maintain a vibrant, thriving downtown that seems to be what’s envisioned by the city fathers, this needs to be a seven-night a week affair with several hotspots at once.

There’s also the argument that the Plaza should be permanently closed to traffic as it was for several years decades ago. For an event like Third Friday, which is kid-friendly, this makes perfect sense. It might not be a bad idea to close off North Division Street as well in order to better integrate the open space in front of the Government Office Building. Again, though, it depends on the vision for the Plaza – if it’s to be retail-focused then parking near the stores would be desirable, but something which is more of an entertainment district where nightspots may locate themselves up and down the block probably is best served with a pedestrian-only Plaza, with a taxi stand on the short street which runs off the Plaza toward Business Route 50.

Any such effort, though, is probably several Third Fridays away so enjoy the art-focused events and the nice weather while you can.

Meanwhile, for another perspective along with a little more Semiblind love, check out Jonathan Taylor and his Lower Eastern Shore News site. He and his wife April were busy taking a lot of photos.