In case you missed part 1, it covered Friday night’s events. I noted in that post that I didn’t get to bed until after 1 a.m. – this after working, driving nearly three hours, not eating right, and so forth – so I missed the breakfast speaker. Sorry.

I didn’t get downstairs until after 10:00 so my first photo of the day was noticing this addition to the lobby space. 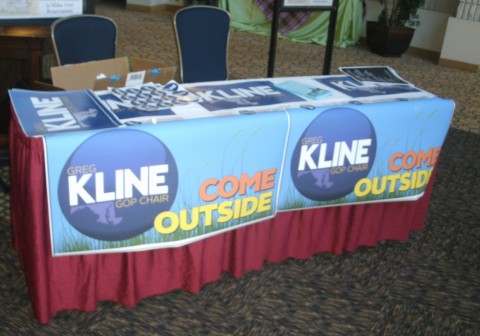 Nice table, but no one sitting there, at least at the time. So as I (and many others) were waiting for lunch, I spied some nourishment with a curious label. Unity cookies? 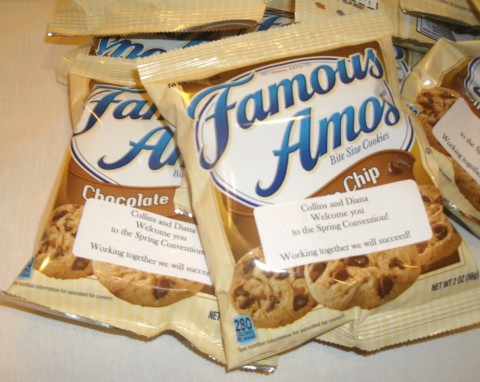 Now I don’t know who arranged for these, whether it was Collins Bailey’s idea or not, or whether Greg Kline was asked. I didn’t find it out of character for Collins but wasn’t sure why Greg was excluded.

Anyway, we had our lunch, and while the food was rather disappointing, it was exciting to hear our party awards and a guy who turned out to be a fine speaker. Presenting the awards was Diana Waterman. 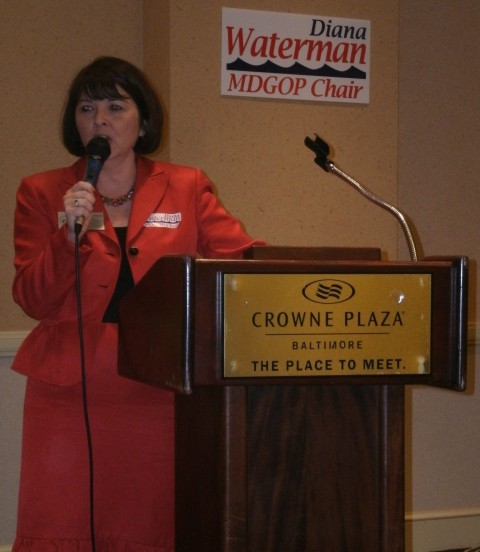 The formal awards presented for 2013:

As I mentioned above, Anirban Basu turned out to be a surprisingly good speaker – after all, he toils in the dismal science of economics so I wasn’t sure just what to expect. 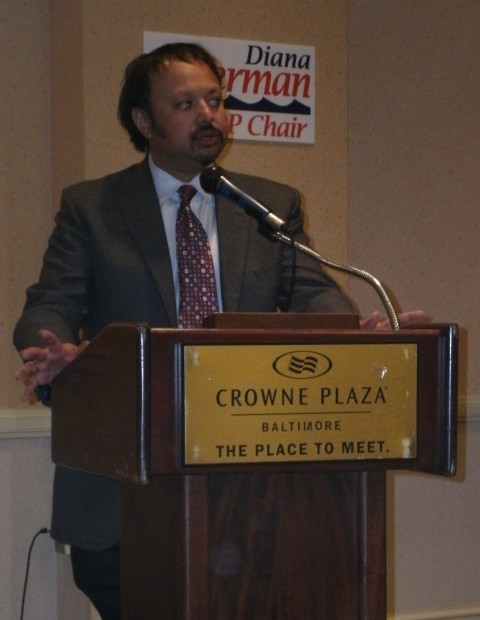 The head of the Sage Policy Group noted he made many of his remarks just a few weeks ago in front of a seminar put on by Change Maryland. But he noted that the business climate in Maryland “further deteriorated” as a result of the General Assembly session; as a result it would take a crisis which is not here yet to get the state to change direction.

Despite the fact the state ranks 40th in business climate according to CEO Magazine and 41st in the nation in tax structure according to the Tax Foundation, the state gained 4,700 jobs in March – a full 5.3% of nationwide job gain from about 2% of the population, explained Basu.

Yet while both Maryland and Virginia share in the benefit of being adjacent to the seat of federal government, it’s Virginia which has the “lion’s share” of large corporations. Meanwhile, Maryland is “overdependent” on the federal government to drive its economy, and while the “token gesture” of sequestration hasn’t affected the state just yet, the next quarter will be a “real stress test” for Maryland’s economy, one which Basu termed “not diversified.”

Moreover, the state continues to drive businesses and high earners away. “When people are leaving your state for Delaware, you have a problem,” said Basu. Maryland businesses are in “the awkward position of waiting for the bad news to come.”

So what solutions did Anirban have? Our side needs to be constructive, tell the truth about the situation, but not come across as rooting for bad outcomes. Two things he would propose would be to completely eliminate the corporate tax rate – a move which would change corporate behavior and create the narrative that Maryland was finally open for business – and allow “right-to-work zones” to be created at the county level.

He also stated the case that taxes are okay, but it matters how the money is spent – some investment and infrastructure is better than others. “(The O’Malley administration) shows a disrespect for the market,” said Basu, pointing to offshore wind and mass transit as two prime examples. Politically, getting the message out means “you have to win one household at a time.” But he also chided the Maryland GOP, even though he was a registered Republican he noted “this room doesn’t look like Maryland.”

This was the best part of lunch, yet I didn’t take one. 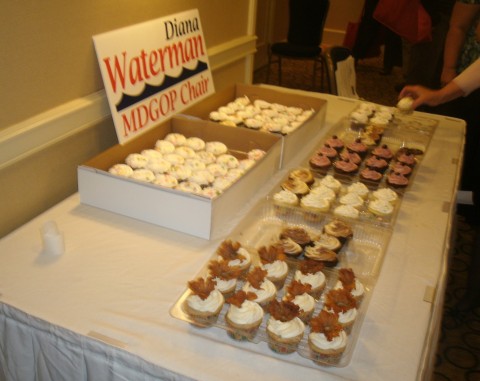 With that excellent address, I didn’t mind the so-so lunch fare so much. It was time for the convention to begin. 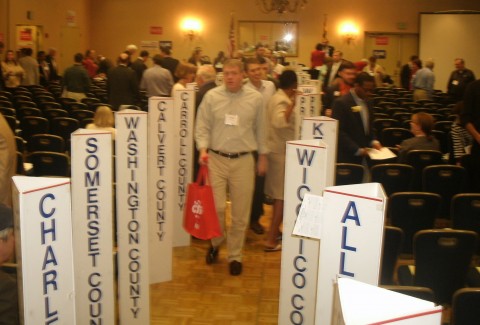 (Sorry about the blurry photo. As usual, Wicomico was seated near the back.)

And the fireworks only took about ten minutes to begin, as a motion was made to amend the agenda and push the Chair elections to the front. This would have gone more smoothly if we had a quicker Credentials Committee report, although those of us sitting in the back were befuddled at what was going on because the sound system was absolutely brutal. This had to be pushed off because a voice vote was not clear as to who was in the majority.

So there was a little bit of business transpired on the original agenda before it was determined how many voters were in the room. Once we got to that point, the agenda change passed with a larger than 3/5 majority.

Because of that, the votes were moved ahead of the reports from the Maryland Senate and House leaders as well as Congressman Andy Harris.

As expected, three names were placed into nomination: Collins Bailey, Greg Kline, and Diana Waterman. It’s fair to say that we expected a multiple-ballot situation and it indeed came to pass.

On the first ballot, the weighted totals were Waterman 264, Bailey 207, and Kline 75. In terms of actual bodies, Waterman had 131 votes, Bailey 104, and Kline 33. Diana drew votes from 22 of the 23 counties and Baltimore City, carrying 12 outright and three – Allegany, Caroline, and Howard – unanimously. Bailey drew votes from all but four counties – the three where Diana was unanimous as well as Garrett County – carried seven counties, and took all nine Washington County votes. Kline carried only Anne Arundel and Baltimore counties and only received votes in 13 of 24 jurisdictions.

Three counties – Dorchester, Harford, and Wicomico – ended up in a tie between Bailey and Waterman.

It was figured by most that, facing the reality of the situation, Greg Kline would drop out before the second round – but he pressed on. So the second ballot remained the same and the votes were unchanged in 13 of 24 counties, but the ones which did were enough to propel Waterman to victory. In weighted votes it finished Waterman 284, Bailey 225, and Kline 37 – the actual tally in voters was Waterman 139, Bailey 117, and Kline 11.

Would Kline dropping out and endorsing Bailey have helped? We will never know, but those who split away from Kline gave just enough support to Diana for her to win.

In a gesture of unity, the two runners-up were invited to speak a few words. 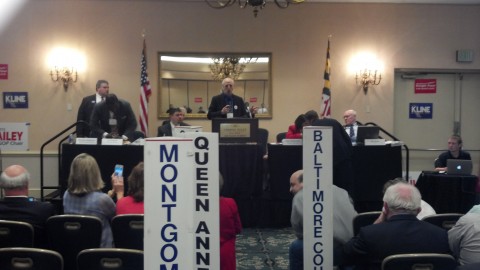 For his part, Collins Bailey said we should “do everything we can to make sure (Diana) is successful…we are what Maryland needs.”

I was a little surprised Collins threw his hat in the ring for First Vice-Chair, particularly when Dwight Patel had campaigned for the job. Patel was also nominated along with three others: Scott Shaffer, Mary Burke-Russell, and Mary Rolle.

We were beginning to think we’d be there all night, facing the prospect of sorting through five hopefuls for the First Vice-Chair position. Instead, Bailey won the job easily, garnering a majority of the vote in both weighted totals and actual members. That balloting was Bailey 135, Patel 36, Russell 33, Rolle 30, and Shaffer 29. Each of the also-rans managed to carry at least one county – Anne Arundel, Baltimore City, and Caroline for Shaffer, Charles, St. Mary’s, and Talbot for Russell, Frederick and Washington for Rolle, and Montgomery for Patel – but aside from a tie between Bailey and Rolle in Allegany, Collins got the rest.

So the Chair question was finally settled, but there was still more controversy as some wanted to move the Bylaws and Resolutions Committee reports up so those votes could be held. Instead, we heard briefly from Senate Minority Leader E.J. Pipkin and House Minority Leader Delegate Tony O’Donnell. (Andy Harris had already left, so we got no Congressional report.)

Pipkin was succinct: “There is no doubt that the state of Maryland has been hijacked and held hostage by the Democratic Party.” He predicted “the gun bill passed in Annapolis will not save one life” and blasted Martin O’Malley’s offshore wind scheme as “the dumbest idea ever.”

Next, O’Donnell made the case that “we had a tough, tough session…for taxpayers.” But he called on us to not repeat the mistakes of 2010 in 2014 and field a full slate of Delegate candidates instead of spotting Democrats 30 seats. And O’Donnell noted the gas tax lockbox “is really a virtual paper bag.”

As it turned out, the final piece of business accomplished this day was the Bylaws Committee report. The three items which were deemed most non-controversial were disposed of rather quickly in a unanimous voice vote. But another item dealing with what were perceived as simple housekeeping changes endured lengthy debate and a few failed motions for amendment before finally passing. (At least I think they did, as the general hubbub in the back of the room made it difficult to hear.)

Lastly came an amendment to give the College Republicans and Young Republicans a vote on the Executive Committee. What was a fairly non-controversial idea – although I had heard some logical “devil’s advocate” arguments against the proposal – suddenly became a hot-button issue when an amendment was proposed to give the Secretary and Treasurer of the Executive Committee a vote, too.

Of course, another fly in the ointment was having to do a second quorum check because a number of participants had departed. But we still had a quorum, and the amendment to the amendment allowing the Secretary and Treasurer a vote passed narrowly.

Somewhere in the middle of all this, an alarmed Diana Waterman came to the microphone and said we needed to be out of this room three minutes ago. But the College Republicans and Young Republicans went home happy because that amendment passed on a voice vote, probably about 3/4 yes. We had to hurriedly adjourn, thus sparing ourselves the National Committeewoman’s Report, National Committeeman’s Report, College Republicans Report, Young Republicans Report, and Resolutions Report. That could have created another controversy because the Tari Moore resolution may have come off the table.

I realize I’m supposed to be in the spirit of party unity now, but having a convention cut short because of time constraints for the second time in three years is pretty much inexcusable. It was bad enough the hotel seemed ill-prepared for an event such as ours, but this meeting was never really kept under parliamentary control as it should have.

Perhaps the return to the more familiar environment of Annapolis this fall will assist in having a more enjoyable convention, and Lord knows we need one after this bruise-fest.