Normally I have gone to Pork in the Park on a Saturday, but circumstances this year dictated I go on Sunday this year. It’s definitely a different vibe from going on a Saturday – the barbecue competitors are gone and the crowds are smaller.

But the ribs are still popular, and those who supply them seem to come back year after year. 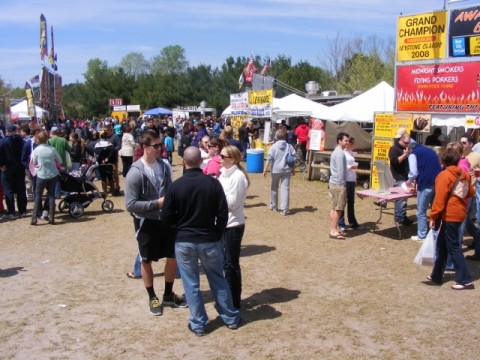 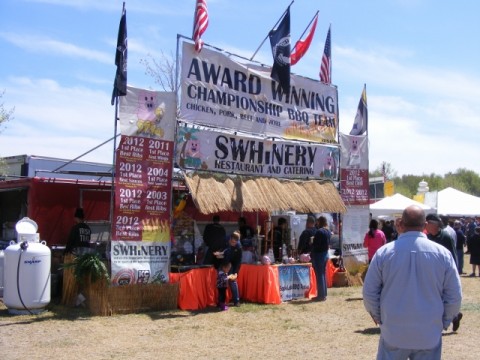 This was the place I got them from this time; alas, the people I liked from last year opted not to return. 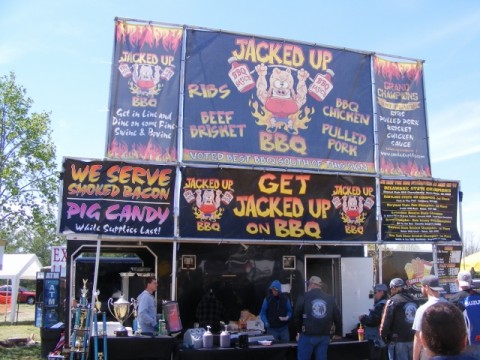 Instead of professional barbecue teams, the Sunday barbecue competition is strictly amateur. But I believe the overall winner here gets to compete against the big boys in 2014. 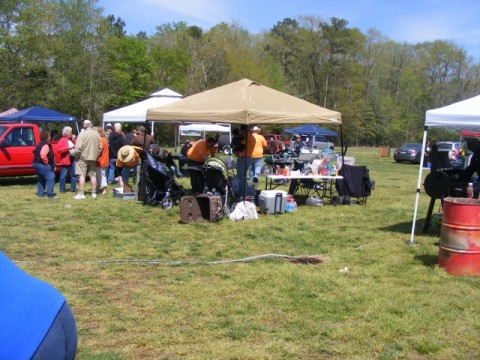 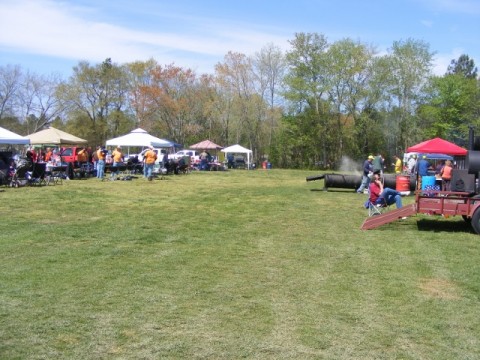 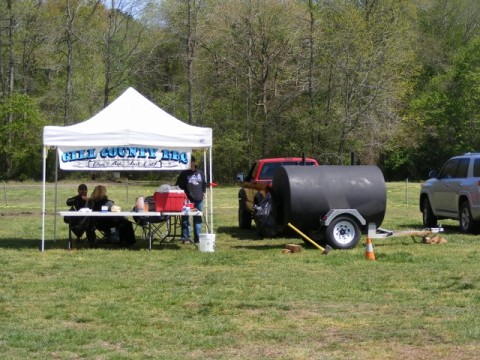 Some of these amateurs still have the great professional signage. 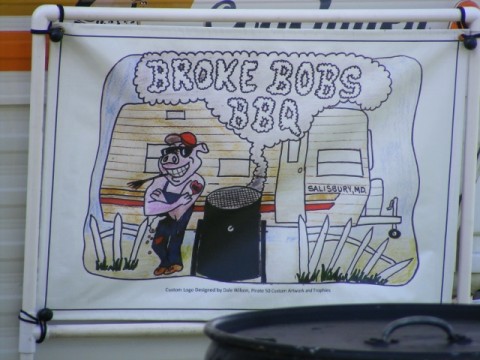 Because the professional pig roasters were gone, there were other competitions going on in their place. Anyone for cornhole? 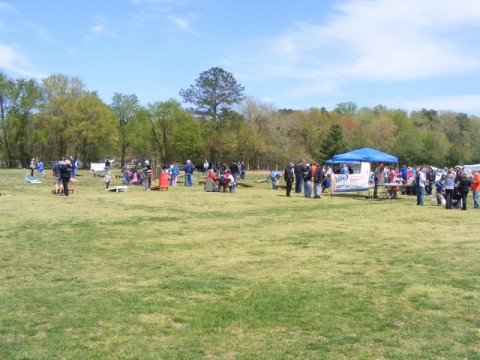 The competition was a little more friendly on the drink end, and I’m glad many of our local establishments represented themselves. With pork, is it beer or wine? 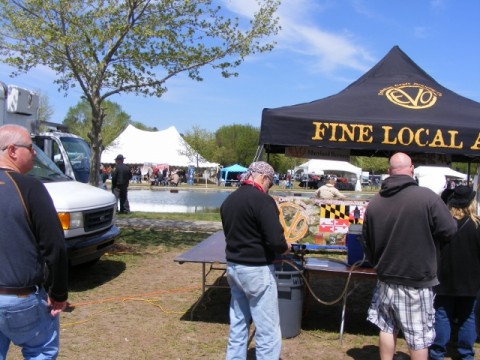 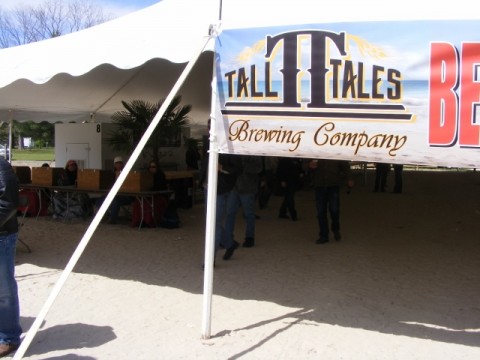 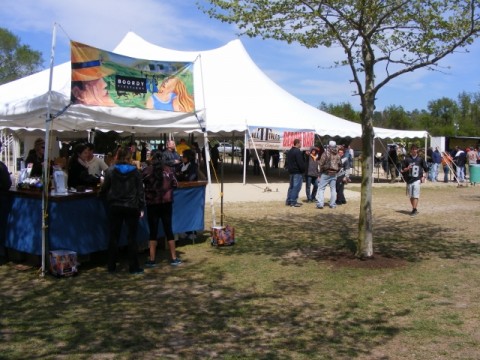 The entertainment was more subdued as well, with just a couple bands there for Sunday. Pictured below the overall entertainment schedule were the Crawdaddies, who as you may expect from the name played with a zydeco flavor. 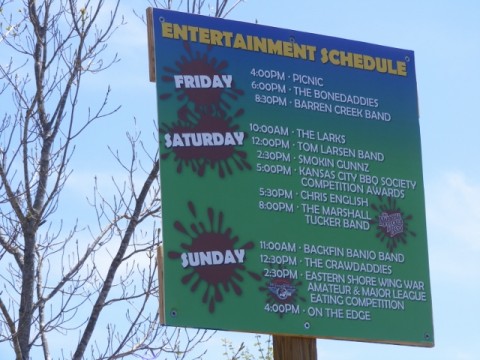 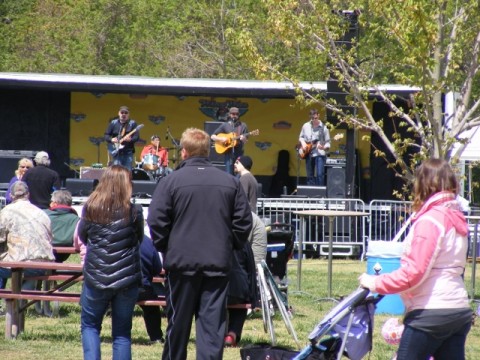 Now Pork in the Park has held events like car shows and such to bring people out on Sunday, but this year they stumbled upon something which may be a winner. The real entertainment this day was provided by gluttony. First came a raft of amateurs who tried their luck at eating vast amounts of chicken wings – 12 pounds in six minutes. 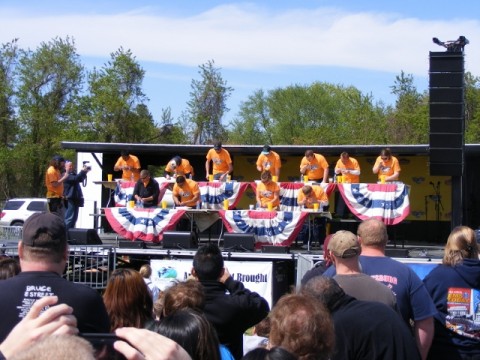 But they paled in comparison to how the professionals took care of business. In 12 minutes their task was to eat 24 pounds of wings. 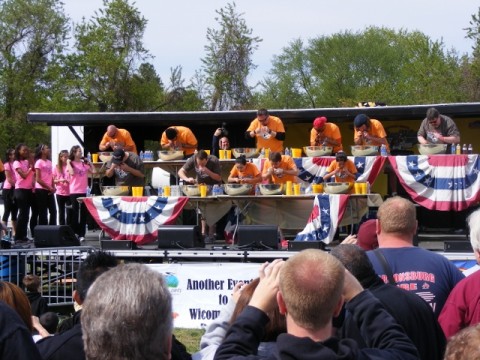 Now these were people on the Major League Eating circuit who had ingested large quantities of items like chili spaghetti, cranberry sauce, asparagus, and so forth. But the most famous competitor, Joey Chestnut, was the reigning Nathan’s hot dog eating champion, a fact gleefully played up by the Major League Eating announcer who breathlessly described the events in detail to a crowd of several hundred.

I found out later that Chestnut was the winner, having consumed over 200 chicken wings in the 12 minutes allowed.

The real winner, though, was event sponsor Wicomico County Recreation and Tourism. Yes, they lost a number of competitors and vendors from last year’s rain and the anger about the poor setup – this year the rides were shunted over to the stone parking lot last year’s food vendors hated and competitors placed where the rides were previously so there would be more room in front of the stage. It didn’t seem like the increased admission cost of $5 (when it was previously $2) did much to dampen turnout, since people probably perceived more value with the entertainment upgrade to a national act.

But it will be interesting to see whether they can top this year’s slate, particularly as a similar event (assisted in part by the former head of Wicomico Recreation and Tourism) makes its debut in a couple weeks down near Snow Hill. That one-day event, called Pig and a Jig, may seem like the “old” Pork in the Park before it became so popular.

Whether that event is rare or well-done remains to be seen.