Since well over 90% of his money comes from individuals – as opposed to self-financing or special interest PACs like his main opponents use – U.S. Senate candidate Dan Bongino was on the lower Eastern Shore tonight collecting money for his campaign. Between three separate events in Worcester and Wicomico counties, over 200 people came to meet and greet the Republican nominee. 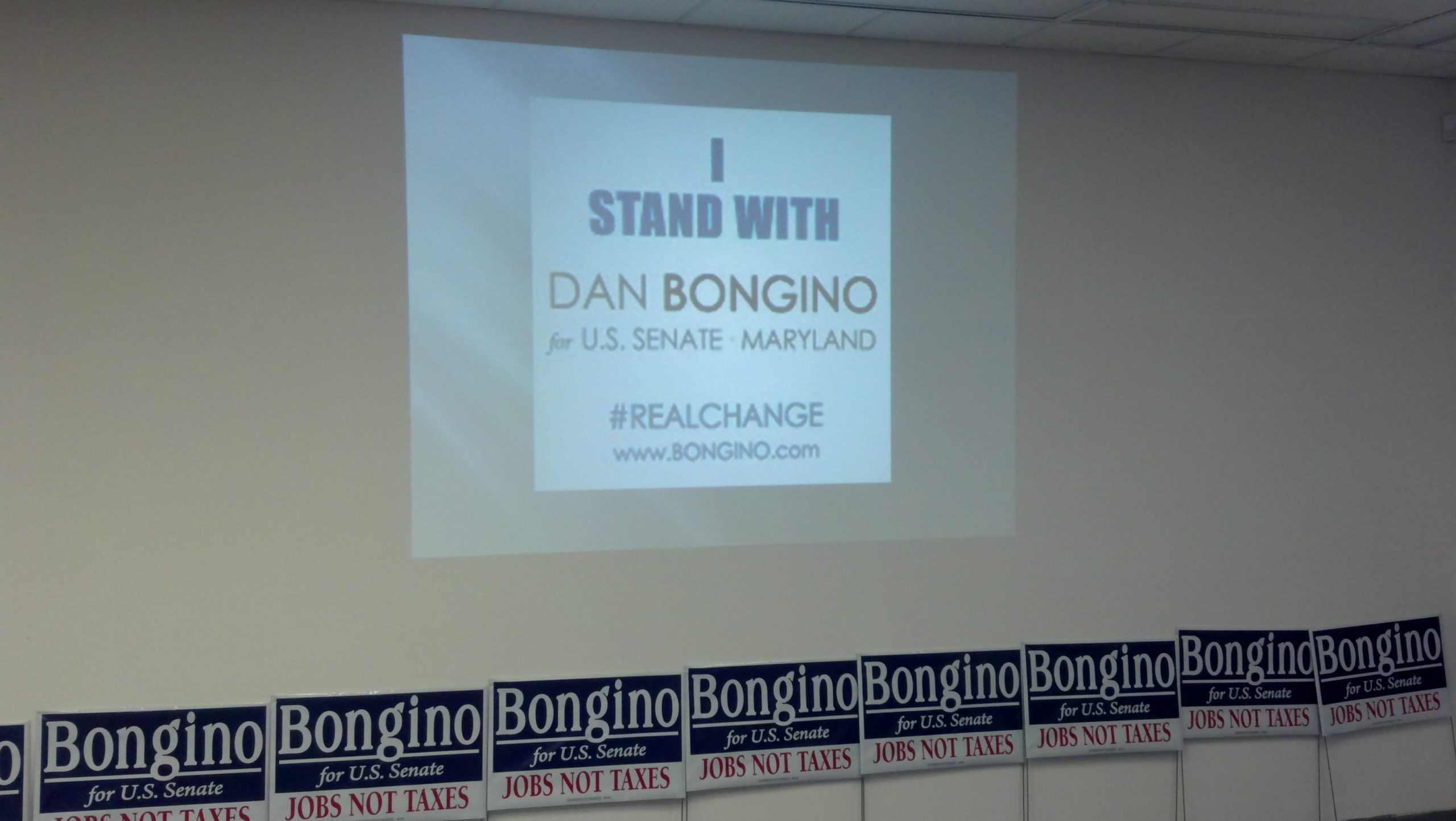 The local meeting was held at our county headquarters, and I have a hint for you: if you want a Bongino (or Romney) sign you may want to get them now. 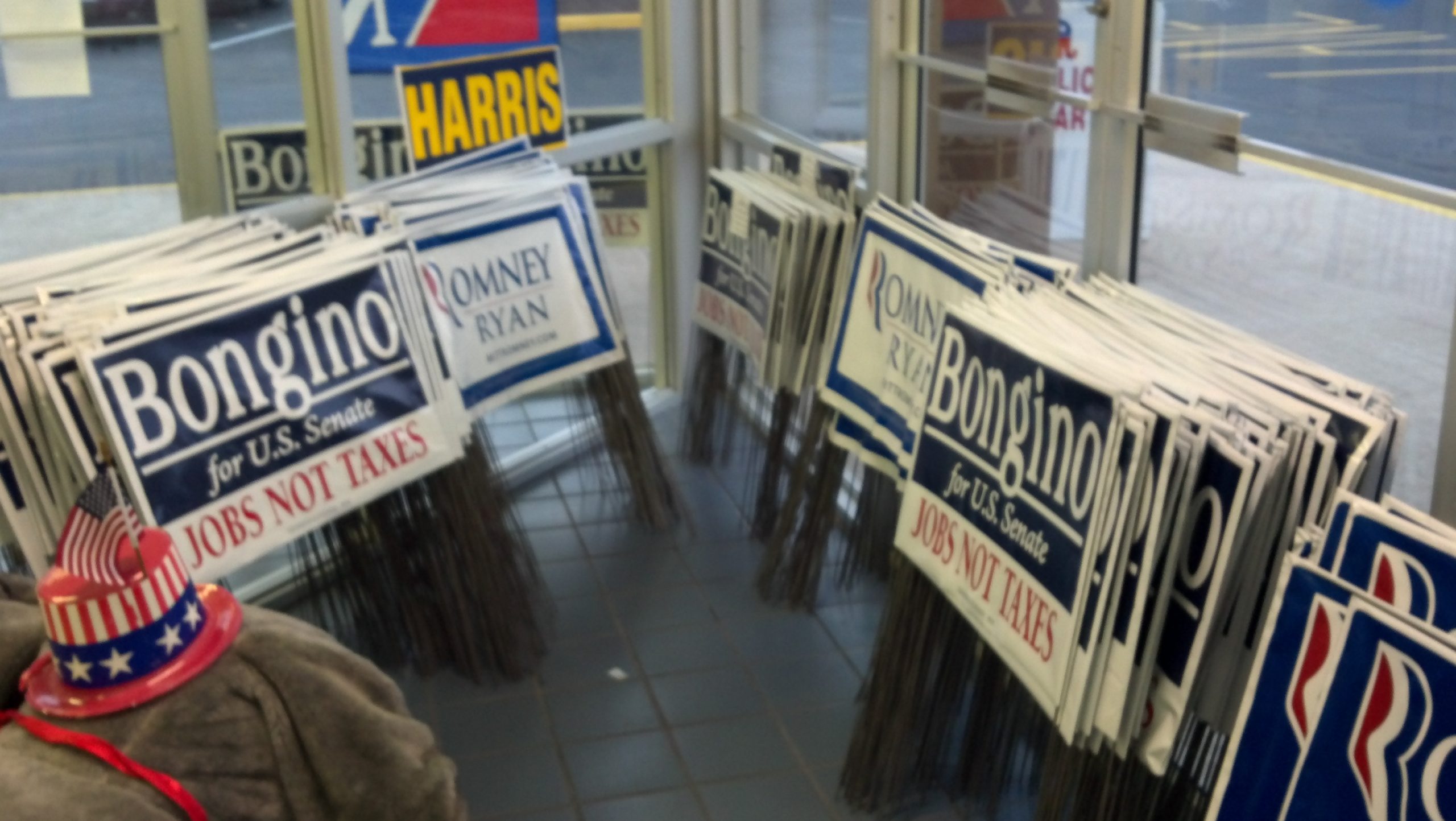 Besides, as the fans say, the Republican ticket is “our only hope for change.” 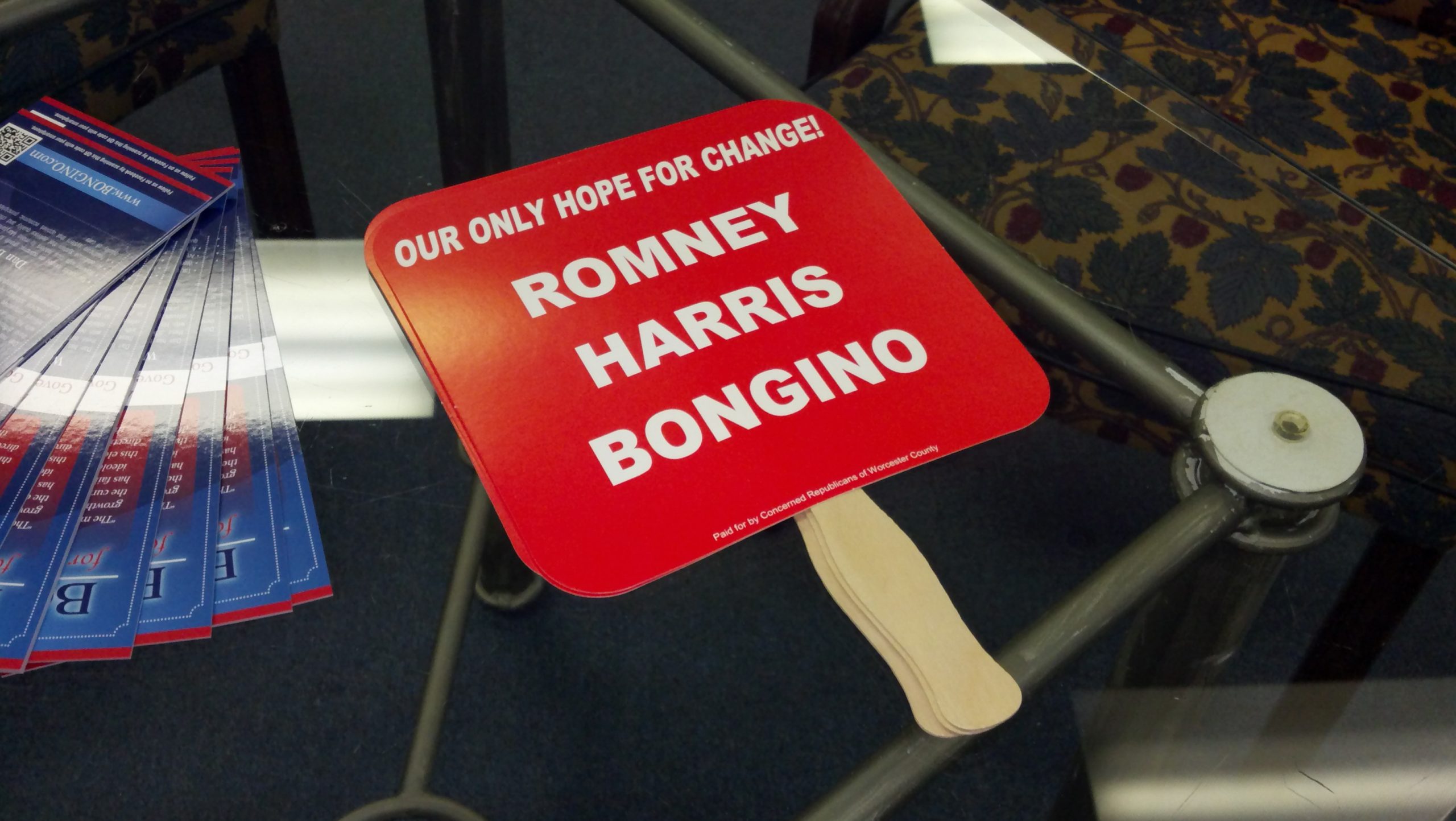 I must say, though, those who hoped for a good dinner weren’t disappointed. Notice I didn’t take a picture of the desserts for fear of inducing a sugar coma by osmosis. 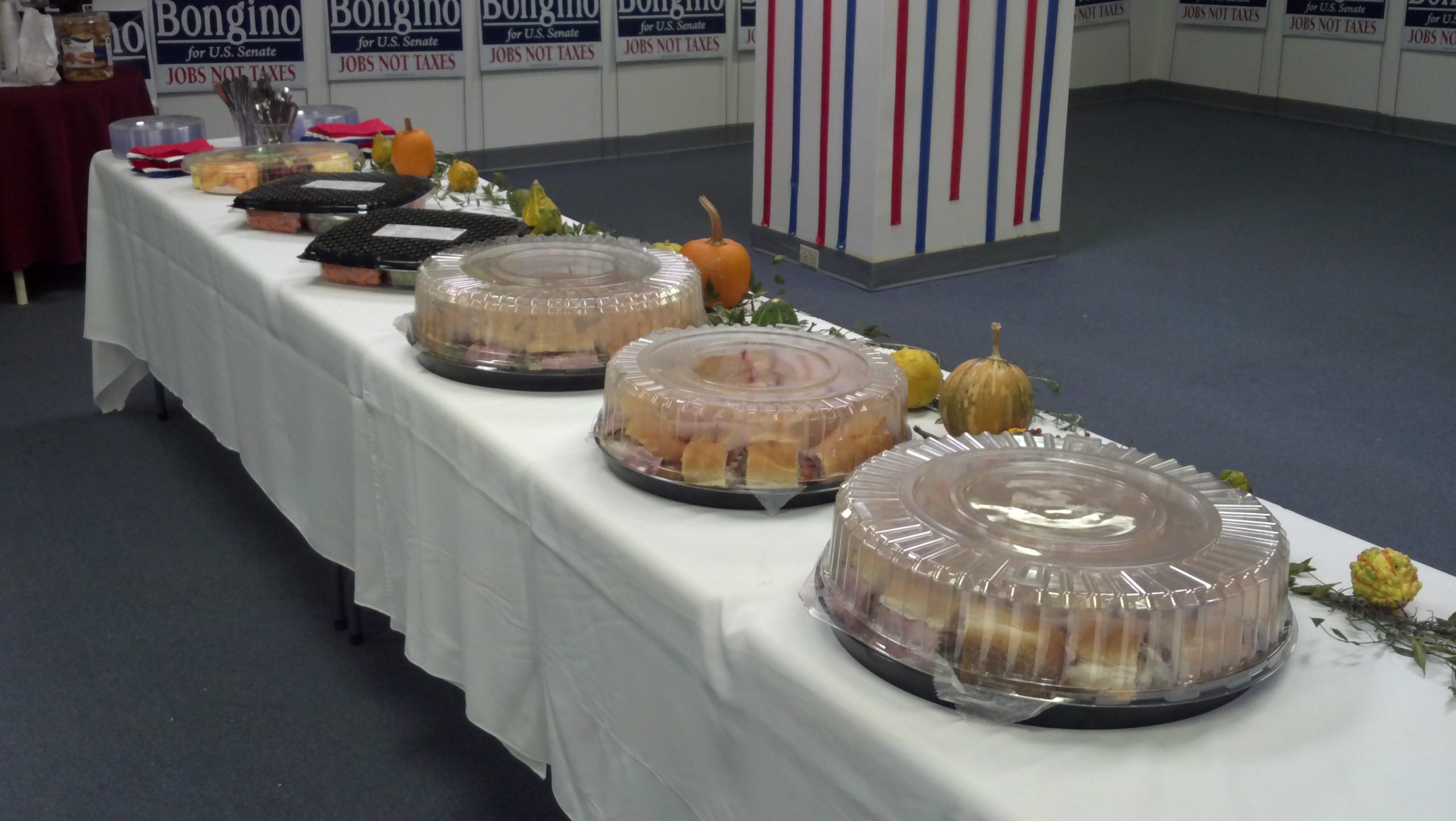 Dan arrived a short time after the 6:30 start to the event, and set out to meet and greet all those in attendance. Here he speaks with Wicomico County Romney campaign chair Bonnie Luna. 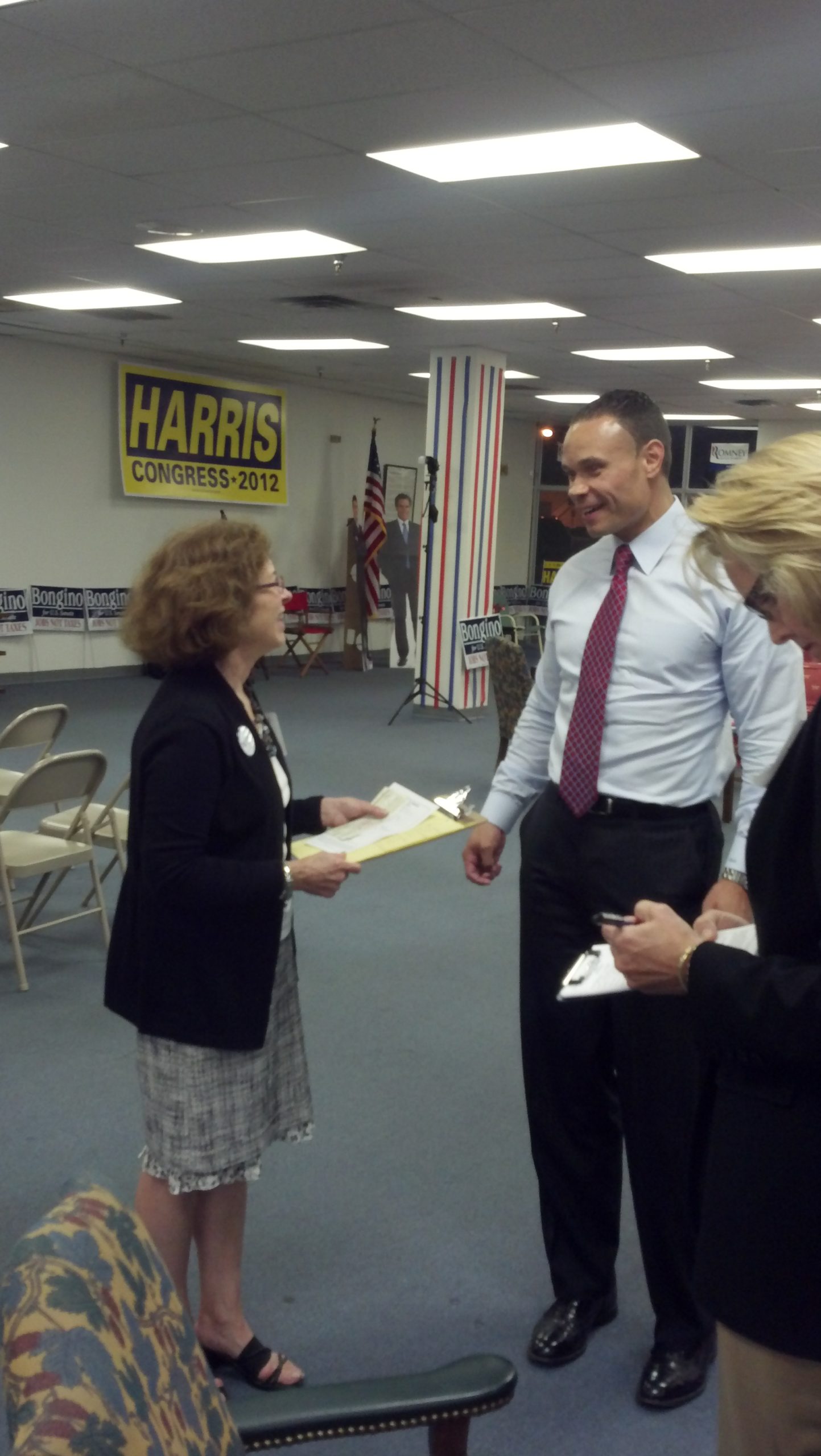 I have seen and heard Dan speak on a number of occasions, but each time I get something different out of it. For example, I knew the part of the story about his leaving the Secret Service to pursue this race, but I didn’t realize it had come after a transfer to the Baltimore office, where he said he got time to “sit and think.” He moved to action because “I couldn’t sit at a desk and watch the degradation.”

I also knew from seeing the most recent financial statements that Dan had outraised his two main opponents combined by about $100,000, momentum which included this “incredible” day on the Shore. But I didn’t know another $250,000 had rolled in since. If the Maryland GOP is as dead as people say, asked Dan, then why did we outraise them? 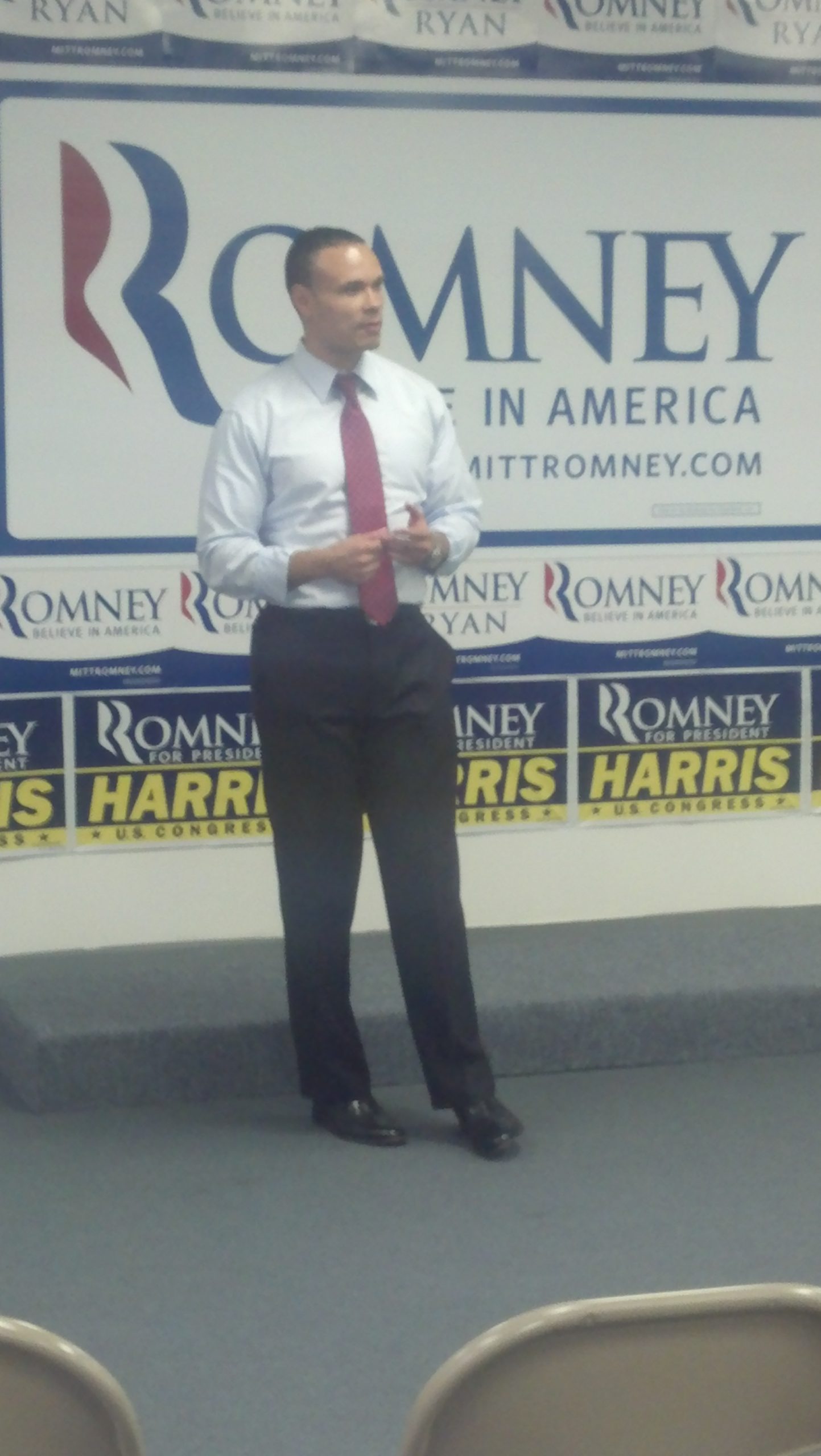 I recalled Dan talking before about how Maryland was both “saveable” and “worth saving” and that Reagan and Bush 41 carried the state. And the part about two paths forward which don’t intersect was not foreign, either. But his words about the Democratic Party were interesting: while he was disappointed back in 1996 that Clinton won re-election, it didn’t mean the country would collapse. Bill Clinton was first and foremost a politician so he knew he had to “dial it back” after the Republican takeover of Congress, said Dan.

I’ve heard Dan talk a lot about Ben Cardin’s record. But the Democratic Party of John F. Kennedy – whose legacy Cardin seems to want to claim and a man Dan’s mother adored – “that party has died,” said Bongino. Further, he remarked that when Republicans win there’s generally not a penalty to their side, but when Democrats of today win we all pay a penalty in lost freedom and prosperity. “You’ll always spend your money better than the government,” said Dan. In many areas of everyday life, but particularly education, liberals have “forfeited (our) kids’ futures away,” he added.

And what of Maryland? Dan has talked at length about not ceding ground, but it runs deeper than just a Senate race. He had some choice remarks about the state’s “septic” bill, which he claimed wasn’t about septic systems but about usurping private property rights. Yet those who leave the state and give up don’t make a point because someone will always come along and take their place – chances are the new arrivals may be more willing to cede their liberties to those in power. “The fight is here,” Dan concluded.

Obviously the conservative message resonated well with most who attended – a number which included far too few local elected officials, in my opinion – but they weren’t really there to be convinced. They were there to give, by check, credit card, or even participate in the hat auction which raised a nice three-figure sum. I gave my modest donation that a struggling writer can afford, too. (And thanks to Delegate Charles Otto, who did attend.)

But there’s a lot more which needs to be done. While there’s one candidate who can buy himself commercial time out the wazoo and another who can count on the Astroturf ground game of union thugs and others who haven’t found their way off the government dependence plantation, Dan Bongino is counting most of all on average people who just want to make a difference. His regional coordinator (and my fellow blogger) Jackie Wellfonder is one such person who tonight shared her story of a political awakening and volunteering to join the Bongino campaign early on, but thousands more who participate in some way, shape, or form exist around the state. Here’s your chance to join them.

In my political lifetime, I have seen candidates who trailed by 17 points a week before the election come back to win. There are signs that the one hopeful using his fortune to carpetbomb the state airwaves with 30-second ads in his upstart campaign is losing traction once people find out just how much he panders to the audience he thinks is listening at the time. And of course, Dan’s other opponent, the incumbent (and very long-in-the-tooth) Senator, is just going through the motions and enjoying the fight between the two perceived lower-tier candidates. He smugly feels it’s in the bag because that’s what conventional wisdom assures him is the case.

Yet for those who are principled, those who feel the government’s role is to simply get out of the way and not feel like it has to be the solution for everything or pick out a certain small number of goals to attain while other, perhaps more important needs go unfulfilled, they are the Marylanders from whom Dan Bongino is seeking a vote. They may not realize it quite yet, but for millions in this adopted home state of mine a vote in their self-interest is a vote for Dan Bongino.

I’m not ceding any ground, so you shouldn’t either. Conservatives have too often been counted out, only to pull out a shocker on Election Day. With a nationalized campaign, Dan is one who can pull the upset – so let’s get out and make it happen.