As I predicted last week given the high probability that Delegate Justin Ready would be unavailable on date number 2, the Wicomico County Pathfinders gathering was rescheduled once again, for Saturday, April 13. It will be held at the original intended location, the Salisbury Chamber of Commerce building (where Wicomico County Republican Club and Republican Central Committee meetings are generally located) from 9 a.m. to 5:30 p.m. Most importantly, lunch will be provided.

Registration is $35 and a direct link to the registration site is here. The MDGOP also has some background information on the concept.

Something we have harped on is finding good candidates who will fill up the ballot in 2014 – no exceptions. Okay, perhaps one exception as Republicans can’t run for the Democratic Central Committee. (But conservatives certainly can, and I encourage those who just can’t shake the concept of abandoning their daddy’s party but nevertheless agree with our pro-liberty principles to give that a shot.)

In Wicomico County there are a total of 22 elected positions available – 15 for the county and 7 for the state, although 6 of those are shared to various extents with other counties. Obviously some of these offices are already held by Republicans so we don’t necessarily need a challenger for those positions, but there are a number of Democrats who have been in their respective offices far too long and need to be replaced with people bringing fresh blood and new, conservative ideas. (Yes, I’m looking at you, Norm “Five Dollar” Conway.)

But with as much bashing of the state GOP as I’ve done over the last months and years, I have to credit them for doing something right. Two copies of this appeared in my mailbox today. 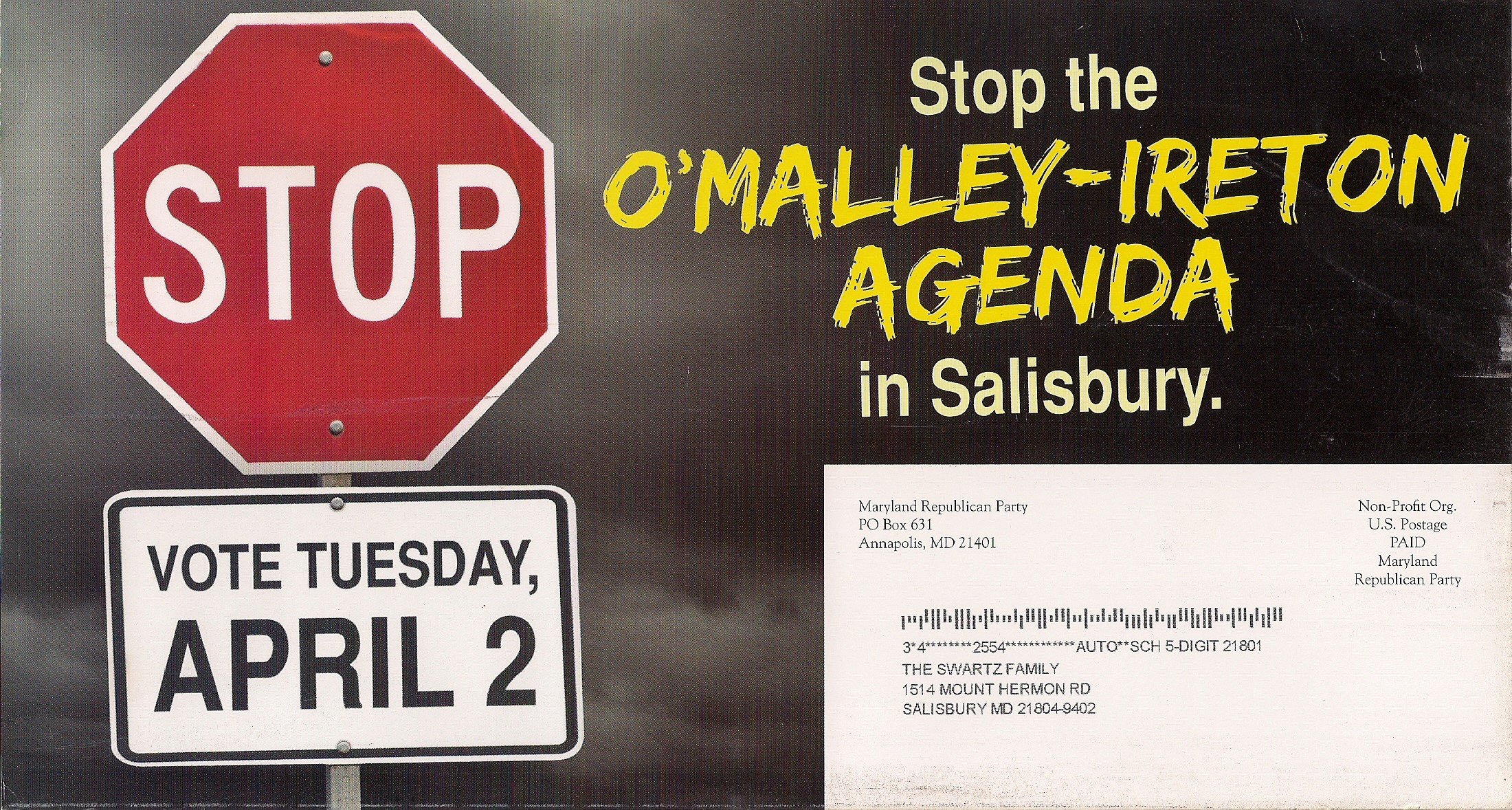 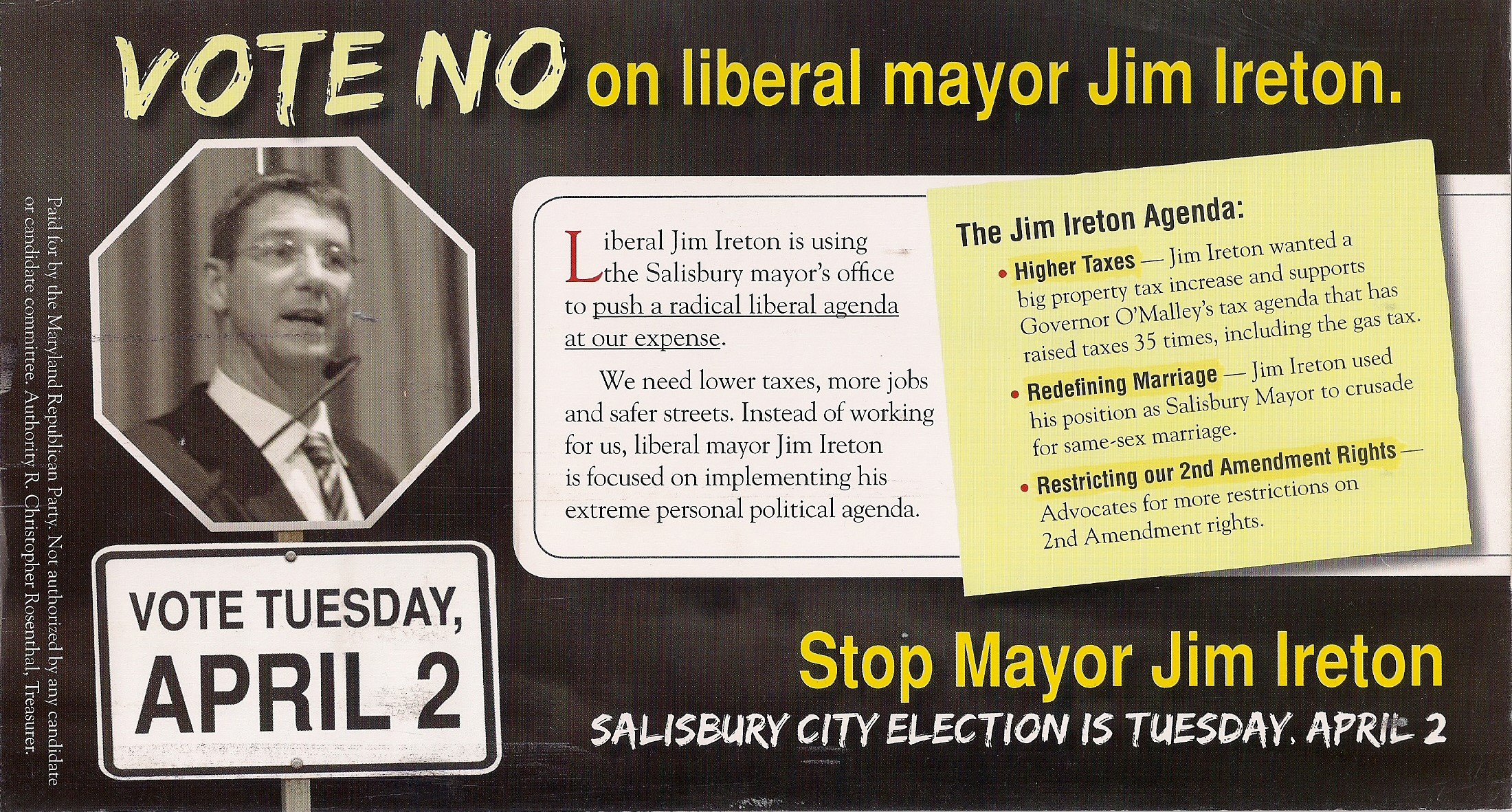 I am sure some are going to make an issue of the second bullet point about redefining marriage, saying it’s an issue we shouldn’t discuss in a city election. Indeed, though, Ireton has publicly expressed his support for same-sex nuptials. Nor would it surprise me to find out that a large proportion of Ireton’s out-of-town contributors – a subset which accounts for more than half of his individual donations – are active in the gay community. A cursory look at two of his more prominent contributors, Victor Shargai and Duane Rollins, led me to believe that a significant backing comes from that political arena. (Rollins is alleged to have a shady political past, too.) Four of Maryland’s complement of openly gay legislators (Delegates Luke Clippinger, Anne Kaiser, and Maggie McIntosh, along with Senator Richard Madaleno) have also chipped in to Ireton’s cause.

One has to ask, then: is their support more about the job Jim’s doing or promoting the rainbow banner he’s holding up? Is Jim Ireton one of the quota of gay mayors we must have to be an “inclusive” society? Personally, I’d rather have someone who does a good job in getting the local economy going again – too bad I don’t have full faith in either candidate to do so.

The party had talked about getting more active in local elections this year, and with the investment of a few hundred dollars have done just that. Kudos to them – and guess what? It spawned some new media involvement, too.

If you were wondering whether the challengers could financially keep up with the incumbents in the Salisbury primary elections, wonder no more. The initial pre-primary financial reports are out and there are some intriguing results.

First of all, it’s no surprise that the small District 1 race has attracted very little in the way of contributions; in fact, challenger Cynthia Polk begged off the detailed report as she didn’t raise enough. Fellow challenger April Jackson has only raised $595 from just four contributors, with the most interesting one being $200 from Friends of (Delegate) Rudy Cane. Incumbent Shanie Shields has raised $860 from 19 different benefactors, with the largest being a city-mandated maximum contribution of $250 from former Salisbury mayor Barrie Tilghman.

As would turn out to be the case for most contenders, the largest expenditure for the District 1 aspirants was signage, although Shields spent over $150 on a fundraiser which apparently only about broke even, based on contribution amounts.

More surprising was the amount of money raised on the District 2 race and who’s raised it. Jacob Day is the clear fundraising leader, with 50 line-item contributions (some were by couples) totaling $6,295. Out of all eight candidates, Day just missed being the overall head of the class – with a caveat, as I’ll explain later. Former mayor Barrie Tilghman maxed out her contribution to Day with $250, but so did a number of others I recognized as local builders, realtors, and developers – Brad Gillis, Michael Weisner, Ronald Morgan (of Becker Morgan Architects), members of the Gilkerson family, and so forth. Also worth noting on Day is that 30% of his individual contributions came from outside the area. The only other candidate with a similar profile is Jackson, who received two of her four donations from a Florida family – perhaps related?

Meanwhile, Jack Heath finished a distant second in contributions with $2,400 from 26 benefactors. A number of prominent local Republicans were in that group, including former County Executive candidates Ron Alessi and Joe Ollinger, who both chipped in $100 apiece. However, Heath also has over $2,800 in loans outstanding – all to wife Linda.

In a bit of a surprise, incumbent Debbie Campbell lags behind in the money race having raised only $1,026 from ten contributors, including $250 from herself.

As was the case in District 1 signage was among the leading expenditures for all three District 2 contenders, although Heath has also invested in a mailing. (It may not have reflected on this report, but my fiance and I both received a mailing from Day yesterday so his fundraising prowess is being spent.)

The mayor’s race, though, proves to be an interesting case in campaign finance.

Incumbent Jim Ireton takes the prize for neatest and easiest-to-decipher report, for the most part. There are 79 contributors listed, who donated a total of $5,818.65. (Five donated a hokey amount of $20.13, which explains the odd total.) His contributors run the gamut from local progressives to a number of local politicians like former County Councilman David MacLeod, Register of Wills Karen Lemon, and perennial Orphans’ Court candidate Peter Evans. There are also Democrats from around the state who added to the pot, such as Delegates Luke Clippinger, Maggie McIntosh, and Anne Kaiser, along with unsuccessful District 1 write-in Congressional candidate John LaFerla. Even Salisbury University president Janet Dudley-Eshbach and local left-wing activists Mike Pretl and Harry Basehart added a few dollars to Ireton’s till.

On the other hand, challenger Joe Albero raised the most money with $6,550. But as I said earlier, there’s a caveat – Albero donated $5,000 to his own cause. The other $1,550 came from just a dozen contributors, several of which were businesses. Included among that subset were Electrical Solutions, Gary Pusey & Sons, MoJo Management, Market Street Inn, Ltd., and Crown Sports Center. It’s not illegal, but Albero has by far the highest proportion of these business-based contributions. A perusal of Albero’s Salisbury News website shows several of these businesses are also advertisers.

It’s also worth mentioning that while Albero’s “official” shell of a mayoral website that’s currently ‘under construction’ has an authority line, Salisbury News – a site where Joe freely takes swipes at his opponent under the guise of “news” – does not. The same is true, however, of the rarely-updated On Your Side blog where Campbell is listed as a contributor along with Council president Terry Cohen, although Debbie apparently hasn’t authored a post since at least 2011. Neither Campbell nor Cohen post an authority line there, although tucked at the bottom is a disclaimer that they speak for themselves and not the whole Council.

Once again, signage seemed to be the largest expenditure in the mayoral race. But it’s interesting to note that the services of DiCarlo Printing were sought by both mayoral candidates as well as Jacob Day. John Robinson’s printing business was also a supplier to Albero and Day. The other candidates mainly utilized other local printers for their signage, although Campbell chose an out-of-state printer for hers. And while I don’t want this to be perceived as “pick on Albero” day, shouldn’t he have included the cost of his “Albero for Mayor” shirts as an expenditure? While he hadn’t officially filed yet at the time the shirts were designed and purchased, it would probably be prudent for the record to know where that money came from and who the supplier was.

But to me, the biggest surprise was how poorly the District 2 incumbent is doing in the fundraising department. While it’s quite likely she can survive the first round based on her name recognition, it’s very difficult to make up ground in the remaining weeks before the general election. In the last several cycles, those who finished “in the money” in the primary went on to win almost every time. The one recent exception I could find was where Gary Comegys overtook Tim Spies to grab the third and final spot in 2007 – Spies was third in the primary. But the dynamics of a “top three” race are different than this winner-take-all set of battles.

On Tuesday we will find out if all that money raised by the challengers is enough to secure a position in the General Election April 2.