Well, this is an interesting followup to a story I posted the other day – you know, the one where I asked whether those correctional officers indicted last month as part of the Black Guerrilla Family (BGF) prison scandal had gang ties from the outside:

Is BGF also prevalent outside the walls of the prison, too? Were any of these women gang wannabes in their youth, and recruited by the gangs from the inside?

Chair Mark Uncapher of the Montgomery County Republican Party obviously has a long memory, as he wrote in his latest party newsletter about a previous scandal uncovered in 2009 by the Baltimore City Paper.

This is a rerun of a very bad horror movie that continues to replay throughout the O’Malley administration.

Rewind the movie back to 2007, O’Malley’s first year in office. Patrick Byer is awaiting trial on a murder charge in the Baltimore Detention Center. Like many of the inmates in that facility, Byers has access to a contraband mobile phone, which he uses to negotiate a murder for $2,500 of the principal witness against him. Just 8 days before the beginning of Byer’s trial, Carl Lackl Jr. is gunned in front of his house in a crime witnessed by his daughter.

Understandably, the prison population isn’t adding any value to society and very, very few people aspire in their life’s wish to be prison correctional officers. Moreover, the percentage of correctional officers who are tied to gangs is probably fairly low (although it likely varies from facility to facility) but it’s obviously enough to shift the balance of power in the Baltimore City facility. For those highest up in the gang’s food chain, jail wasn’t punishment at all but simply a place to do business with decor which left something to be desired. 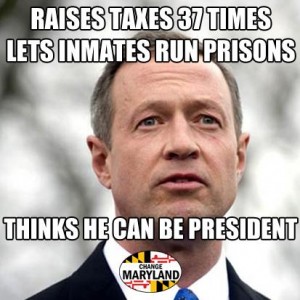 This isn’t going to add to Martin O’Malley’s Maryland legacy, although it may be an interesting thing to bring up for Lieutenant Governor (and 2014 gubernatorial candidate) Anthony Brown and perhaps Attorney General (and also prospective candidate) Doug Gansler. But as the meme points out, Martin O’Malley has set his sights on a higher office since about the time the results of the 2010 election became official. Priorities for him seemed to shift from the actual idea of governor a relatively small state to burnishing his resume. Running prisons? That’s boring, and they probably can’t vote anyway – let’s pander to the gays, green energy crowd, and illegal immigrants!

(Obviously the hat tip for that comes from Change Maryland. Boy, this state really does need a change.)

And one has to wonder as well about the state’s other prisons. Looking at crime in Salisbury, which is a known resting stop for families who have loved ones locked away in the Eastern Correctional Institution outside Princess Anne – conveniently about as far away from the I-95 corridor as you can get in this state but not too close to Ocean City to scare away the tourists – one has to ponder to what degree this is a problem in ECI. Like Baltimore City, Somerset County is one of the state’s poorest areas so jobs, particularly for those without a great deal of education, are scarce. Granted, the fact that ECI is in a rural setting alleviates some of the issues found at the Baltimore City facility but being inside is still being inside.

But now that environment affects us outside the prison walls. That’s the problem with ineffective leadership, and it’s something which will need to be addressed in 2014 when the state next votes.

By now readers are probably aware of the brewing prison scandal in Baltimore, where it’s been widely reported that the Black Guerrilla Family ran the Baltimore City Detention Center to the extent where inmate and BGF leader Tavon White is quoted as saying, “This is my jail…I make every final call in this jail.” If you’re not, this Washington Post article by Ann E. Marimow and John Wagner is a good place to start, while Jeff Quinton at The Quinton Report is critical of the lack of calls for accountability from the Maryland GOP. Quinton also links to the indictment press release and ponders the impact on O’Malley’s nascent presidential run – in short, he’s been a bulldog on this one.

However, that’s not to say individual GOP members have been silent. State Senator Joe Getty was quoted in the Post piece, and Delegates Michael Smigiel and Michael Hough have opposite opinions on the fate of Maryland Public Safety and Correctional Services head Gary Maynard.

One thing that may bear further scrutiny, though, is the backgrounds of the thirteen women, aged between 24 and 31, who were indicted as rogue correctional officers. It’s interesting that State Senator Lisa Gladden noted in the Post, “A lot of times, (female corrections officers) become smitten with the inmates.” But what if they were already acquainted with the inmates? Is BGF also prevalent outside the walls of the prison, too? Were any of these women gang wannabes in their youth, and recruited by the gangs from the inside?

Something which needs to be addressed is the workplace practice which, first, leads to a situation where there are female corrections officers guarding male inmates, and, second, seems to permit behavior where suspicions should have been aroused. If someone comes to work with the name of an inmate tattooed on their neck, shouldn’t that have raised a red flag?

This scandal, which came to light just as Governor Martin O’Malley was trying to raise his 2016 profile with a trip to the Middle East, also could spark a debate over whether the death penalty should have been rescinded.  If you read the indictment, it’s clear that Tavon White would stop at nothing, not even murder, to further his aims. If it can be proven that he ordered a “hit” from his jail cell, with the rescinded death penalty there is no ultimate punishment awaiting him.

At this time, it doesn’t appear there will be a petition drive to overturn the ill-considered legislation that ended the death penalty in Maryland, and that’s simply wrong. I can understand the logic of fighting the gun law in the courts, but it’s shameful that no similar effort seems to be possible to restore the ultimate punishment.