For most of the last year or so since the first two candidates made it official, the race for the GOP nomination for governor has been relatively genteel. But in the waning days before the primary, the campaign has gone downhill fast. Some would argue the decline started with the Change Maryland/Hogan-Rutherford allegations, but I thought it was a legitimate question because there is a gap between Hogan’s formal announcement and the accounting for his campaign.

But I found it interesting that an e-mail from the address “mdfreedom2014@gmail.com” came to me last evening, alleging the following. It is untouched from its original, with the exception of moving links for flow:

I’ve been following the primary for governor with increasing alarm — Larry Hogan is hoodwinking us. He sounds like a republican but when you actually hear his personal feelings, he’s an Obama Democrat. I was even more upset this morning when I heard he was supporting and promising to uphold gay marriage. It’s ridiculous that we can’t get someone who will defend marraige (sic) at its most basic level. He also seems to be fine with Obamacare and I’ve been told he supports abortion and refuses to stand up for life.

I’m sending you the most disturbing part though and people really need to understand how DANGEROUS this is!! There’s video of Hogan telling the baltimore sun how he supports opening up our borders to illegal immigrants. He also seems perfectly fine with the illegal dream act enticing illegal immigrants to come to maryland. I mean just read that whole last article.

We have a unique opportunity right now to nominate a real conservative patriot to stand up against the O’Malley tax regime, and if we nominate a moderate who’s too weak to present a contrast we’ll blow it completely. Marylanders NEED to understand how dangerous Hogan will be in office and we NEED to get out the word.

For the first part, I don’t see the correlation between the 14-second clip “freedom60” on YouTube gleaned from the Baltimore Sun forum and the allegation. As I heard Hogan say on the clip:

I think we ought to make it a fair and balanced process for people to legally immigrate to the United States. I like the fact we’re a beacon of freedom and opportunity, that people want to come here.

It’s not making sure they are legal before they receive driver’s licenses or encouraging 287 (g) enforcement, but I don’t see that as throwing open the borders, either. The case against Larry, though, is made a little stronger given this from the Carroll County Times:

While O’Malley and Maryland lawmakers have taken up a host of social issues such as same-sex marriage and allowing people who are not in the country legally to pay in-state tuition if they have paid state taxes, Hogan isn’t interested in trying to make any changes on those issues.

“It’s not something we need to revisit at all,” Hogan said, adding that voters approved both of those laws on the ballot in 2012.

Well, voters can be hoodwinked – after all, a slim majority voted against their best interests on a host of issues in 2012, beginning at the top and working down.

It’s been apparent from a few weeks into the campaign that Larry Hogan was more centrist than the rest, which is why he studiously avoided making statements on several key issues and skipped forums where such questions could be asked. Message control has been key, even on two mailers I’ve received over the last few days. They both say essentially the same thing, although his idea of “reforming” Common Core on one morphed into putting a “halt” to Common Core for the second. He also went from the original “spending-first approach” to “lower taxes” to “lowering taxes across the board.” I think the polling is showing that approach resonates with voters.

Not to say Hogan is immune, since some of his most prominent backers stretched way out on a limb to equate a bad vote on a bill with support of a mileage tax which was proposed much later – an attack picked up by the Maryland Liberty PAC, making for some odd bedfellows in the Maryland political world.

But rather than work on catching the first place contender, David Craig must be hearing footsteps from behind. It’s an effort to make conservatives question Charles Lollar. 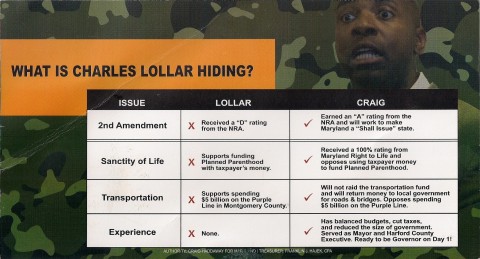 It’s unfortunate that Craig doesn’t list the documentation on these charges, but I can review all three as Lollar threw an unnamed “former campaign staffer” under the bus for the NRA grade, a naivete on how Planned Parenthood can shift money around, and a promise to “push forward” with the Purple Line in front of a pro-transit audience after being against it elsewhere.

This is the quote regarding Planned Parenthood that I’m sure Craig used, from the Gazette:

(Lollar) said he would make sure groups such as Planned Parenthood could not use any tax dollars to pay for abortions, although they still could receive and use public money for other women’s health services.

Ask yourself: if someone paid your car payment, wouldn’t it be easier to spend your income on groceries? If government pays for “other women’s health services” then PP has more money to provide abortions. It’s that simple, and remember – the card simply says Charles “supports funding Planned Parenthood with taxpayer’s money.”

But Lollar struck back with his own e-mail:

When you hear accusations about me such as those that appeared in a campaign postcard distributed by another Republican candidate recently, please ask yourself the following questions:

Regarding the Purple Line, I suppose it depends on the definition of “affordable.” He’s also taken to using the hashtag #BratTheVote, referring to Dave Brat’s recent upset of Eric Cantor in Virginia.

Still, I wish the four had stuck to defining and attacking the real enemy: the Maryland Democratic Party machine.