It wasn’t exactly by Pony Express, but the third of three days of current Harford County Executive David Craig traveling the state and making his 2014 plans official began this morning in Salisbury at the Government Office Building. His announcement drew about 40 onlookers and various members of the media, as you’ll soon see. 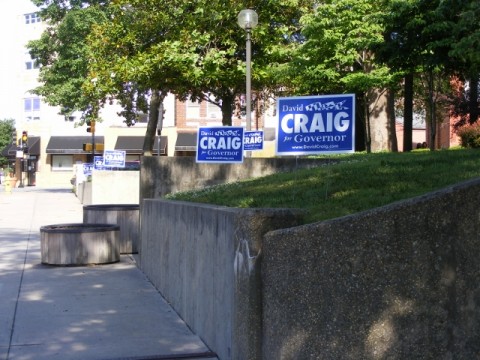 Following Monday stops in Havre de Grace, Dundalk, and Hagerstown, and an itinerary yesterday which included Silver Spring, Prince Frederick, and Annapolis, the final day was opened with some pleasant weather and welcoming remarks by Wicomico County Councilman Joe Holloway. 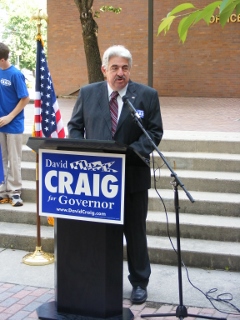 Holloway’s welcome served as a means to introduce many of the local elected officials who were there to back this Republican effort; a group which included Central Committee members from Worcester, Somerset, and Wicomico counties as well as his fellow County Council members Bob Culver and Gail Bartkovich, Wicomico County State’s Attorney Matt Maciarello, and Delegates Addie Eckardt and Charles Otto.

Holloway then introduced Gail Bartkovich, who had the honor of introducing our esteemed guest.

Gail opened up her warm welcome by noting that our state government seems to think that problems are solved in just two ways: taxes and spending. “Annapolis has forgotten that Maryland government works for us,” said Bartkovich. “We deserve a choice.” 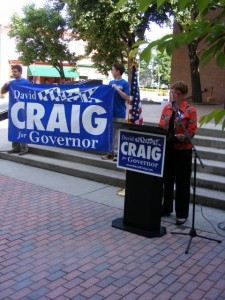 Gail went on to point out that David is unique as a man who has headed up both the Maryland Municipal League and the Maryland Association of Counties as mayor of Havre de Grace and Harford County Executive, respectively. She touted a number of fiscal accomplishments David has achieved as county executive, including leadership in agricultural preservation and a “buy local” campaign. Obviously in a rural county like Wicomico this was seen as appealing.

But the key points Gail wanted to bring up were Craig’s experience as a county leader and the idea David could be a credible alternative to the current policies in Annapolis which I feel only seem to enrich those who are connected. In that, she accomplished her goal and set the stage for the man who would be governor.

The audience seemed quite receptive to his message as well. 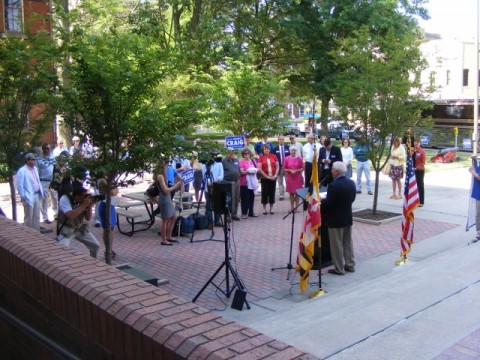 In his 16-minute statement, Craig touched on a number of key points. 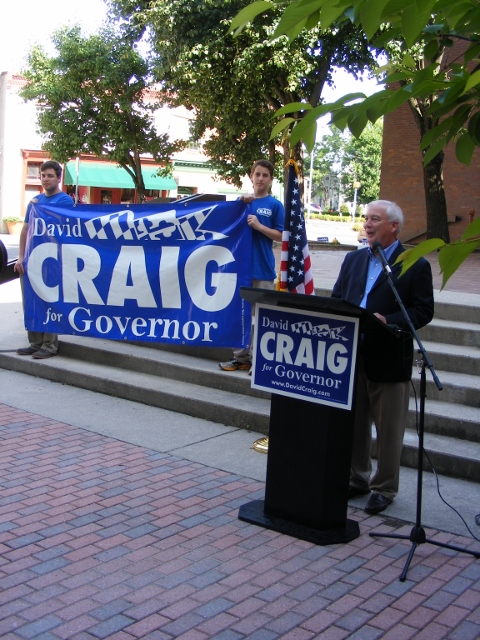 Coming from a long line of Marylanders, Craig praised the state he grew up in. “I’ve been blessed to grow up in Maryland, to live here, to raise a family here, to have a career here, and to live with my grandparents and – now – our grandchildren,” he beamed.

Comparing his hometown to Salisbury and other small towns in Maryland, Craig reiterated his “faith” in the state, noting, “we can get off the mat, we don’t have to be counted out and don’t have to give in.” But our leaders were focused on the next election, not the next generation, said David. 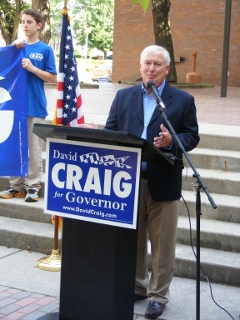 “When they focus on their political power for too long, we see our faith starting to erode,” warned Craig. He then blasted the incumbent, stating that “politicians…seem to be more concerned about being rockstars and celebrities and (with the) headlines than they are about doing what they’re supposed to do.”

All the while, Maryland is being “outflanked” by its neighboring states. Yet, in the areas adjacent to our surrounding states, said Craig, “we are the forgotten Marylanders.” Government isn’t working for us, he continued – the “political monopoly” in Annapolis is working for itself.

David turned to the taxing legacy of Martin O’Malley, pointing out that the 40 tax increases enacted by the O’Malley/Brown administration have cost working Maryland families $3.1 billion. Yet he warned, “if we don’t offer an opportunity or a choice in 2014, by 2018 that number will be $20 billion.” 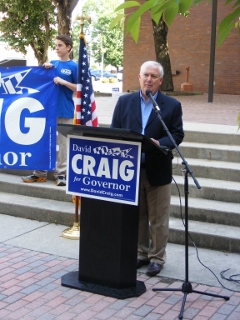 If government continues to act as it pleases, added Craig, we will continue the trend which has seen 6,500 small businesses leave the state – second worst on the East Coast – and 31,000 taxpayers who fled the state for more tax-friendly confines like Florida. As an aside, David added “it would have been better to get rid of the death tax than the death penalty,” a line which drew applause from those present.

Turning to education, David reminded the audience which had been fed the line about Maryland’s top-ranked education system that the assessment had come from a trade publication. “That has no connection with student achievement,” said David. “It’s all about how much money you spend in education, not about how well the children do and what happens with them afterward.”

Craig was also critical of the state’s transportation plans, chastising the waste and conflicts of interest in awarding contracts, along with “falsely” balancing the state budget with $1 billion from the Transportation Trust Fund.

David asked about how we “lost our balance” between the environment and agriculture, steering away from sound science principles and instead “looking at what the headlines will be” in the quest for a cleaner environment. Eventually this imbalance will force succeeding generations to leave the state.

“This is what an unbalanced government looks like,” added Craig. He then extolled his achievements in 32 years in government, including setting a financial plan for his successor as mayor of Havre de Grace which has enabled the lowering of the city’s tax rate seven years in a row. (If only Salisbury could say the same.)

But his biggest selling point may have been lost, buried in a paragraph of other remarks. “We have more jobs in Harford County now than we did before the recession started,” said David.

“I’m just a regular Maryland guy,” he continued. “I refuse to accept we are going to continue to be a one-party state…we need to give people a true choice.” And with a track record of confounding the naysayers, Craig was confident in victory. “I’m not going to be counted out,” concluded David.

He then talked to his supporters before turning his attention to the media. 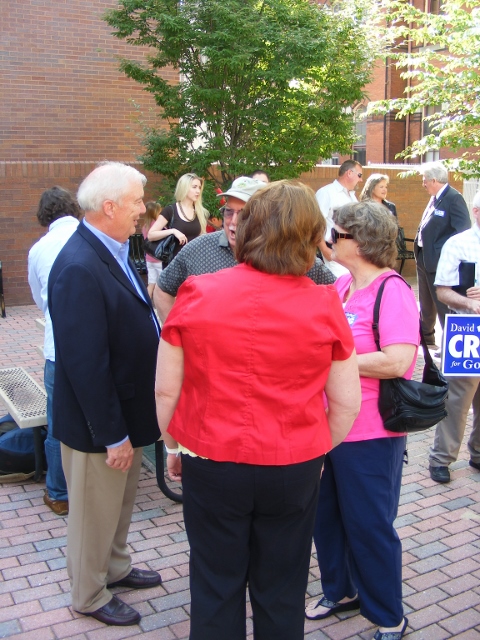 There was a good bit of local media there, with a camera crew and reporter from WMDT-TV patiently watching the affair before getting their interview in, while next in line was Jennifer Shutt of the Daily Times. 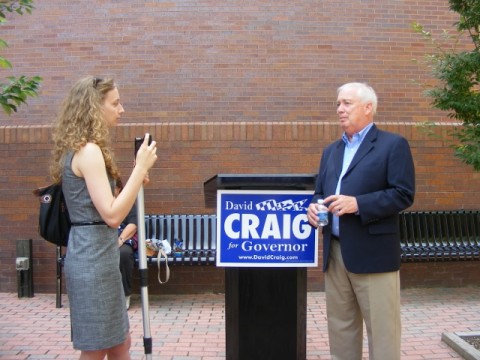 As I noted in my post from early this morning, newly-minted District 38C candidate Mary Beth Carozza was also there and introduced herself to the would-be governor. I also received a little insight about her campaign as I was awaiting my chance to speak with David. 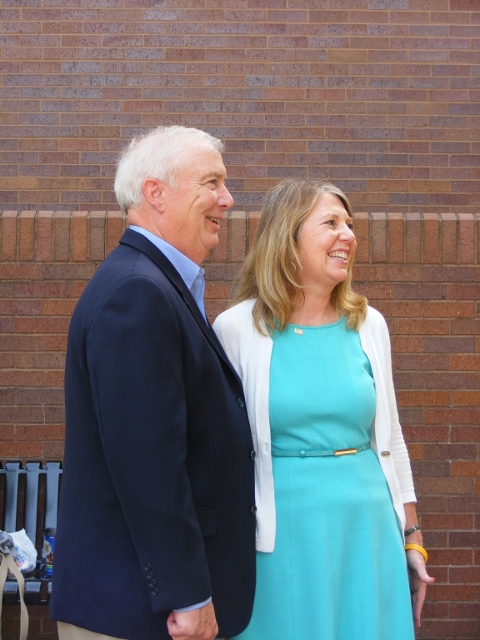 That interview I had with David Craig will be published next Tuesday as I polish off the TQT series for a day. I was the only local blogger there so you’ll get his insight on some local issues.

Yet David didn’t just jump on the bus and leave after finishing with me. Instead he investigated another local business. 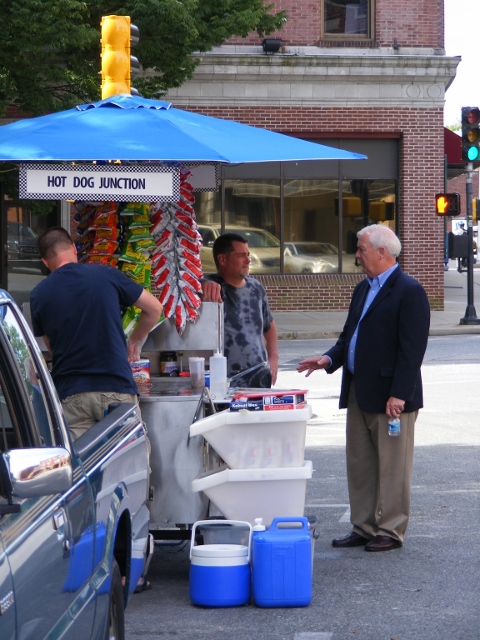 Today was the final day of the Craig announcement tour, which came just as fellow Republican Ron George will formally kick off his 2014 gubernatorial campaign this evening in Annapolis and rumblings from former Lieutenant Governor and RNC Chairman Michael Steele about throwing his hat into the ring later this year. (Sounds like a former governor I know, feeling entitled to win without a campaign.)

But Craig seems to have established his place as the man to beat thus far, and it’s certain that he’ll see a lot of Salisbury in the coming months as he seeks the nomination.