Yesterday I got a mail piece that REALLY burned me up as an elected member of the Maryland Republican Party – as opposed to the two who claim to speak on my behalf. Here’s a photo: 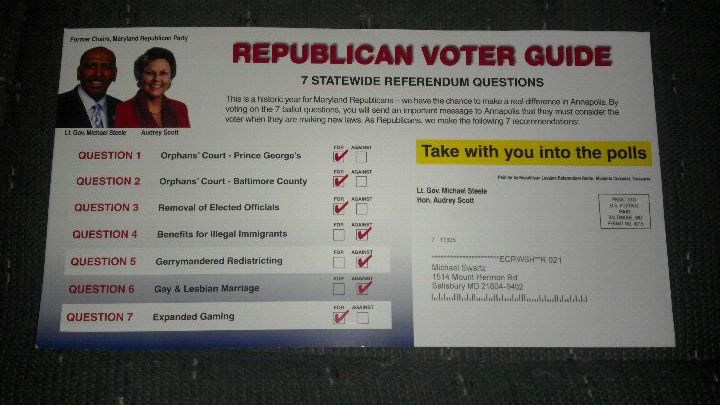 Maybe it’s because I don’t have family on the payroll of the pro-Issue 7 side, but it seems to me that these two have drifted pretty far away from the party mainstream on a number of issues.

If you really want a good – conservative – Republican voter guide, you can look no further than my website since I went over all these questions last week. I don’t sell out to the highest bidder.

It is interesting to note, however, that the group which paid for this mailing is NOT the one which has paid for the numerous pro-Question 7 mailings which have found their way to my mailbox. Those are paid for by the laughably misnamed FOR Maryland Jobs and Schools, while this mailing was paid for by the similarly misnamed Republican Leaders Referendum Guide. The treasurers for each group are different as well.

Now I can understand that both Audrey and Michael have their roots in Prince George’s County and they feel the new casino would someday benefit their former home. And it just might once the conditions are set right.

But we are in a situation now where casinos being opened up cannibalize the revenues of existing facilities, and the rationale for choosing locations seems to be more about cronyism and buying votes than real market forces. It’s telling that MGM waited to jump into the market until they got a sweetheart deal they could live with; meanwhile, Penn National played by the original rules and watched their investment in Perryville go sour the minute a casino opened in Anne Arundel County. Obviously that’s the risk an investor runs.

So why should every little decision have to come down to the voters? I’ll grant that I’m not familiar with the setup of other states, but it seems to me that if we’re talking about a commission that includes both gaming and the Maryland Lottery the rules should be relatively the same – if the Maryland Lottery wants a new scratch-off game voter approval is not required.

The solution is simple: vote AGAINST Question 7 and make the General Assembly come back with a ballot issue in 2014 to repeal Article XIX of the Maryland Constitution. That ill-considered change from 2008 removed the General Assembly from making decisions more properly theirs, punting these issues to a ballot every two years as opposed to being able to make changes at least annually if not more often via a Special Session as it was this summer. If Question 7 passes then there’s no incentive to change a system that’s flawed. Let’s get gambling done right: it’s as simple as that.

And just for the record: Steele and Scott are wrong on Questions 1 and 2 as well. There’s no need to modify the Orphan’s Court in any county.