I have a number of items I collected over the last few weeks that I figured I would end up getting to after the election. Well, the election is over so now I can clean out the e-mail box with this handy feature.

Despite Donald Trump’s stated defense of Planned Parenthood (coupled with his vow to defund it) and shaky position on abortion, the head of the pro-life group Created Equal was pleased with the election results and their efforts in securing them. 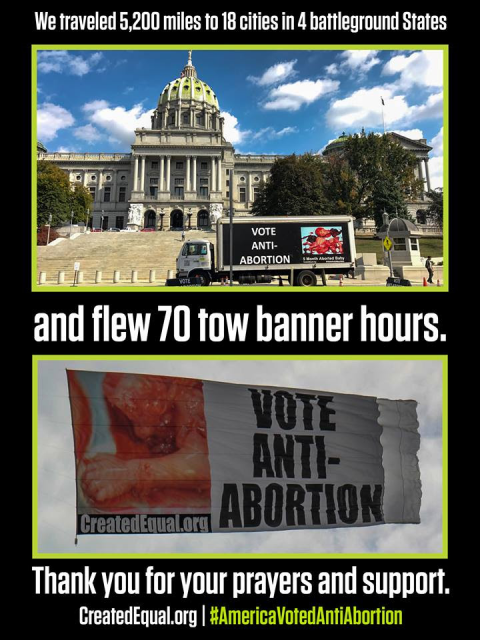 “Now, we must hold our new president-elect accountable for his promises to defund Planned Parenthood, pass a 20-week ban, and nominate a Constitutionalist to the U.S. Supreme Court,” said Created Equal’s Mark Harrington.

Defunding Planned Parenthood will be a battle since Congress controls the purse strings and a Republican majority couldn’t get the job done in this edition of Congress. And as a reminder: they are funded through September 30, 2017 – the end of the federal fiscal year. Passing a 20-week ban and getting a pro-life SCOTUS justice will also be difficult with 48 Democrat Senators, although eight of them may want to keep in mind that Trump won their state and they are up for re-election two years hence. (In 2018 Democrats face the same minefield Republicans did this time: 23 of 33 Senate seats at stake are held by Democrats, along with two “independents” who caucus with the Democrats.) But I suspect the pro-life side will be disappointed with a President Trump; however, I never thought he would be President either so he may shock us all.

Another group angling for a payoff is my old friends at the American Alliance for Manufacturing, who are begging:

President-elect Trump and Congress must come together on much needed investment that will put Americans to work building and repairing our nation’s crumbling infrastructure. Stronger trade enforcement to address China’s massive overcapacity and a crackdown on countries trying to circumvent U.S. trade laws can boost manufacturing jobs.

Factory workers were more than a prop in this election. Now’s the time to deliver for them.

The signs are there that Trump may be their kind of President: we know he’s more hawkish on trade, and he’s planning on making it possible for up to $1 trillion in private-sector infrastructure investment over the next decade. But it takes two (or more) to tango on trade, so progress on that front may be slow. And the union-backed AAM may not be happy with the infrastructure plan if it doesn’t feature union-friendly rules and prevailing wage regulations. (Maybe this is a good time to repeal the Davis-Bacon Act? I doubt Congress has the guts to.)

But if you thought AAM wanted a tougher stance on trade, this diatribe came from Kevin Kearns, head of the U.S. Business & Industry Council:

Trump’s antagonists (on trade) are Wall Street institutions, multinational corporations, major business organizations, academic economists, editorial boards, business journalists, opinion writers, bloggers, and the generally knowledge-free mainstream media. All are opposed to Trump because they are wedded to a false, outdated “free trade” dogma, which has decimated the working and middle classes.

On Capitol Hill, a minority of Democrats and majority of Republicans are partial to the same free-trade theories. Speaker Paul Ryan admitted as much in his remarks on the election victory, noting that Trump alone had recognized the dire plight of average Americans.

I found it interesting that the LifeZette site has as its editor-in-chief Trump ally (and radio talk show host) Laura Ingraham. But this was the real payoff of the Kearns piece for me:

Trump must impose a Value-Added Tax of 18-20 percent applicable at the border to all imports. Over 150 of our trading partners use such taxes to make American exports pricier in their home markets. We should reciprocate.

So anything we import becomes 18 to 20 percent more expensive? Yeah, that will end well.

Another item in the election hopper was some attempted reform from another guy who I’ve oftentimes cited on my website, Rick Weiland. A “trifecta of reform” his group successfully put on the South Dakota ballot went 1-for-3 the other night. Measures for redistricting reform and non-partisan elections failed, but South Dakota voters narrowly passed a sweeping campaign finance reform package the state’s Attorney General said “may be challenged in court on constitutional grounds.”

Personally, I would have been fine with the two that failed in a broad sense – as a Maryland resident, I know all about partisan gerrymandering and would be interested to see how non-partisan elections pan out. (The duopoly would have a fit, I’m sure.) But this campaign finance reform was a bad idea from the get-go, and it tips the Democrats’ hand on how they would attack the Citizens United decision. One controversial facet of this new law would be a $9 per registered voter annual appropriation to pay for this public financing – such a law in Maryland would be a required annual $35 million appropriation from our General Fund. (The fund Larry Hogan used in his successful 2014 campaign was built with voluntary donations via a checkoff on income tax forms; a checkoff that was dormant for several years but was restored last year.)

And instead of “democracy credits” as this amendment proposed, a better idea would be one I believe Ohio still uses: a tax deduction of up to $50 for political donations. But I’m sure soon a South Dakota court (and maybe beyond) will be ruling on this one.

I also received some free post-election advice from the creators of iVoterGuide, which is an offshoot of a small Christian group called the Heritage Alliance (not to be confused with the Heritage Foundation.)

Pray specifically for the appointment of Godly people as our newly elected President selects his Cabinet and closest advisors.  Pray that the Administration, Senate and House will work together to honor life and liberty as set out in our constitution by our founding fathers.  Pray for ALL elected officials to humble themselves and seek God’s will for our nation.  We need to repent, individually and as a nation, and turn from policies contrary to God’s word.

Pray for unity and peace.  Our country is deeply divided. Christians must truly start loving our neighbors as ourselves so that there can be a spiritual awakening.  Now is not a time to gloat but to turn our hearts continually toward God so we can be examples of His love and work toward reconciliation and unity.  Pray for all nations, as a new stage is being set both nationally and internationally.

I think I can handle that. Oddly enough, this was also a subject of our Bible study prayer group Wednesday – maybe one or more of them is on this e-mail list, too. As for iVoterGuide, what they need is a larger state-level base as Maryland and Delaware aren’t among the handful of states they cover (it’s mostly federal.)

As iVoterGuide‘s executive director Debbie Wuthnow concludes, “we ask you pray about how God wants you to be involved in retaining the freedoms He has so graciously granted us.” I suspect I’m going in the right direction here but one never knows what doors open up.

I was originally going to add some energy-related items to this mix, but I think I will hold them until later this week for a reason which will become apparent. There’s one other subset of items I’m going to have fun with tomorrow – I would consider them odds but not ends. And so it goes.