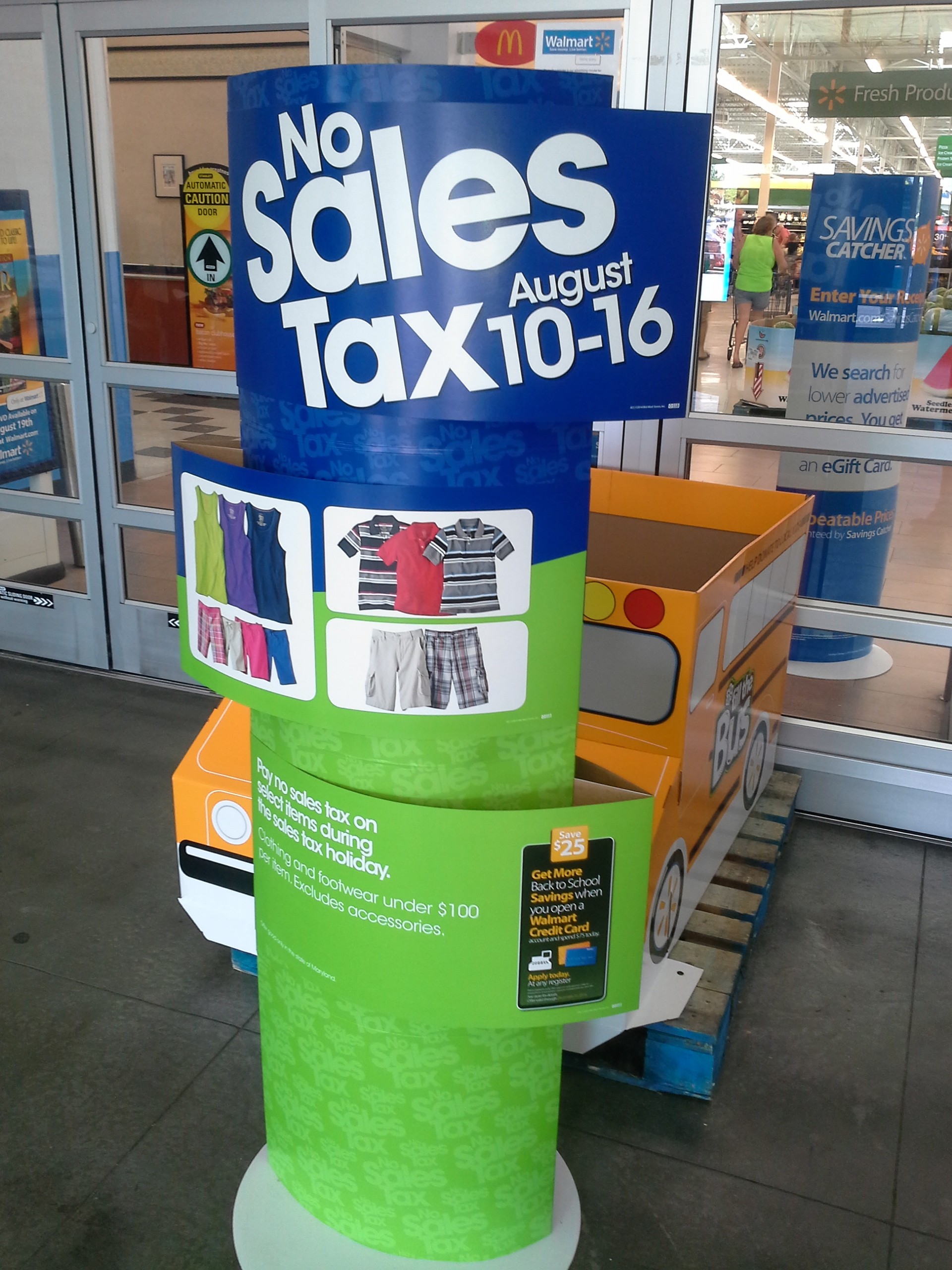 As you can see, the state of Maryland is once again exhibiting its generosity by not charging sales tax this week on clothing and certain other goods. (I took the picture at my local Walmart, actually to send to Kim as a reminder.)

I’ve often advocated for the reduction or elimination of the sales tax – at least for those counties on the Eastern Shore – as a way to compete with nearby Delaware, which charges no sales tax. However, unlike my recent idea of ridding ourselves of the corporate income tax, which raises about $1 billion annually, I realize it would be a lot more difficult for the state to rescind the sales tax entirely. The state expects over $4.4 billion a year from the sales tax – about 11% of revenue – so getting rid of that would be a lot less likely. The sales tax is the third-largest revenue stream for Maryland, behind the individual income tax and the 27% of our revenue we receive from Uncle Sam.

But would it be a bad thing to make the Eastern Shore a tax-free zone? Obviously I can hear from here the wailing and gnashing of teeth from those of you on the other side of the bridge, but when you think about it the chances are pretty good those from the Western Shore have to pay a toll to get over here anyway. So why not give yourselves that break?

In rough terms, the Eastern Shore is 1/10 of the state’s population, so in theory it would cost the state $440 million a year to exempt the Eastern Shore from the sales tax. I’ll assume we do a little better than that given the tourism attraction of Ocean City and several close outlet malls, so call it $500 million. Certainly the state can figure out a way to excise 1% or so from its budget, with the additional income and jobs created for people on this side of the Bay making a significant dent into that perceived loss to the state. That’s borne out in part by what Comptroller Peter Franchot told the Daily Times – lost revenue from exempt items is partially made up by extra non-exempt items purchased. By that same token, the sales tax loss would come back in the form of extra gasoline tax collected, more income tax from increased employment, and other revenue from enhanced economic activity.

We’ve tried to exempt ourselves from the sales tax increases before, but all those General Assembly members from the other side of the Bay want us to pay our fair share – never mind we are already taxed, regulated, and dictated to death over here. We carved out certain parts of the state to pay a “rain tax” so why not go the other way and allow some counties the economic relief?

When Larry Hogan is trying to figure out some of the taxes he can cut to assist hard-working Marylanders, why can’t he do those of us who have to compete with Delaware a favor and make this part of the state a sales tax-free zone? You just might bring some business back from Delaware as a bonus.