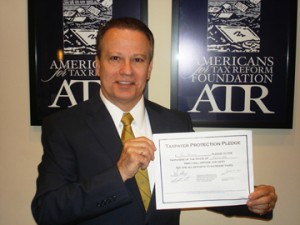 Like most members of hthe Republican Party, Ron George states the case that he stands for fiscal conservatism. The photo to the left is him beaming after signing the Taxpayer Protection Pledge, a document put out as a vow between the candidate and the taxpayer, through Americans for Tax Reform.

But does Ron follow through in other areas of fiscal responsibility? Since Ron is a member of the General Assembly, the answer seems to be yes. He’s not voted for an O’Malley budget since 2007, when just 5 Republicans dared to vote against it.

Yet the reaction to the news on Ron’s Facebook page was very skeptical, so Ron elaborated:

Of course, left unsaid is what happens if the audits come back clean, But it’s also worth pointing out that Maryland spends about 10 percent more per capita than the national average, so just getting back to the mean would have eliminated the need for any of the O’Malley/Brown tax increases. This makes sense because our state is fairly close to being 1/50 of the population, so it would be a microcosm of the nation’s “average” state.

There is one other area I’d love a little direction on, though. Ron’s seventh promise is (intentionally?) vague, but it’s worth expanding on in my view:

I promise to work towards energy independence to ensure Maryland will keep energy sources in-state and not be dependent on unstable governments half-way around the world.

Does this mean finally getting around to taking advantage of the Marcellus Shale under the western part of the state? How about joining Virginia and other Atlantic coastal states in a call to restart oil exploration off the coast? I’d appreciate some specifics on that, too.

Maybe the energy industry needs its own pledge to sign.