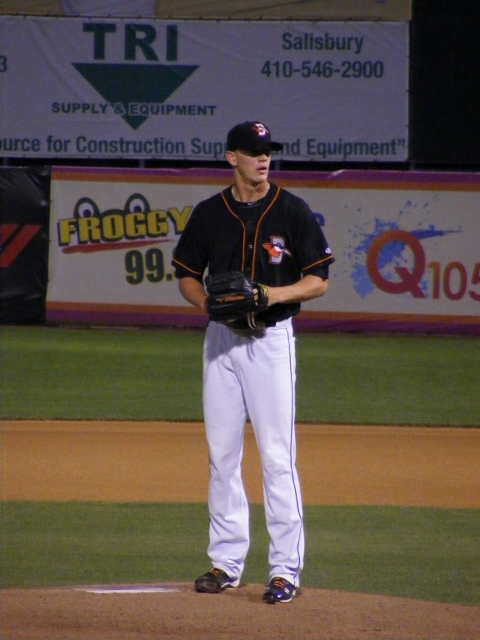 It’s a situation Delmarva Shorebirds fans have become all too familiar with – the end of a half-season and the team hopelessly buried in the second division. But we had one thing going for us, and that was the chance to deny the homestanding Hickory Crawdads the division title in the final game of the first half. Admittedly, it didn’t look good as the Shorebirds were thumped 12-0 the night before and were sending a pitcher with an ERA of 6-plus to start the last game before the All-Star break.

Perhaps Baltimore followers have been disappointed with Parker Bridwell to date, but his start Sunday probably raised a few eyebrows with the Orioles – and crushed the playoff dreams of Hickory fans who watched Parker throw eight-plus innings of shutout ball, allowing just three hits and fanning 10 with nary a walk. (The run he allowed was the single batter he faced in the ninth, who came around to score on the bullpen.)

Granted, this one great start didn’t make the overall numbers that much better, as Bridwell is still 4-6 with a elevated 5.57 ERA for the season. But there are signs that the 21-year old prospect from Hereford, Texas is heading in the right direction in this, his third tour of duty with the Shorebirds. Consider that the 5.57 ERA is improving from 7.06 in five 2011 starts and 5.98 last year, and the strikeout-to-walk ratio which was 13-to-13 in his first stint and 71-to-63 last season is thus far 64-to-27. 27 walks in 63 innings is about 4 per game – still somewhat high, but pointing in the right direction. He only walked 5 in his last three starts, covering 18 2/3 innings.

While being a ninth round pick doesn’t make a prospect a sure thing, the Orioles have probably given Bridwell a longer leash than someone picked to fill out the Aberdeen roster in the 39th round. This is obvious when you consider that, despite his struggles, the Shorebirds have handed him the ball every fifth or sixth day since he came to Delmarva in 2011. Even his one “relief” appearance in that stretch was to resume a game suspended several weeks before, as the resumption landed on his rotation turn.

So Bridwell, who cracked the Orioles’ top-20 prospect list before this season, still has a long way to go in showing fans he can turn in these performances start after start. He’s approaching a career crossroads, as a player needs to take less than two full seasons to advance through levels after A-ball. But putting together a string of starts such that he had against a desperate Hickory team might just be the impetus to finally push him up the ladder.