A lot of little (and big) stuff to talk about in this edition of odds and ends. I want to start local as a follow-up to something I wrote last weekend about the Wicomico Board of Education. Wicomico GOP Chair Dave Parker believes the headline originally placed in this Daily Times story was “misleading,” and it was indeed changed online to that which you see in the story.

The original, however, was “Wicomico County GOP committee protests Board of Education nominee.” Yes, the Daily Times got that one wrong – the protester was me, speaking on my own behalf. Maybe Jennifer Shutt is familiar with my work and I suppose I have my share of influence, but I don’t speak for the committee as a whole.

Now that I have that cleared up, I can add a note sent to me by the “pretty in pink” Delegate Addie Eckardt, whose Crab Feast & Sausages fundraiser is rapidly approaching – Sunday, September 9 is the date. It’s going to be held at J.M. Clayton’s in Cambridge from 5:30 to 7:30 p.m. and the cost is $50 per person.

But if you’re a local Republican and don’t have the $50 lying around, you can still help. Our erstwhile headquarters coordinators Cynthia Williams and Bonnie Luna are looking for a few good men (and women, too) to staff our party headquarters from 10 a.m. to 8 p.m. daily and 10 a.m. to 4 p.m. on Saturday. (We’re not opening on Sundays.) You can stop by the headquarters at 800 S. Salisbury Boulevard or call (410) 742-0308. We’re not picky in that respect.

Libertarian Muir Boda was kind enough to pass along a note regarding candidate forums he’s been invited to. One in particular is local:

“The Eastern Shore Farm and Environment Candidate Forum”  presented by the Maryland Farm Bureau and the Chesapeake Bay Foundation. September 24, 2012 7:00 PM to 9:00 PM at Salisbury University’s Great Hall at Holloway Hall. PAC-14 will be recording the forum.

Unfortunately, I’m sure I can’t be there to tell you what really happened because that’s also the night the Republican Club meets. (I wonder if the CBF knew that when the date was selected.) But it will be interesting to see what softballs they lob up there for Democrat Wendy Rosen to answer – from what some non-biased observers have told me, that’s about all she can handle. After all, anyone who brings up the eeeeeevil Koch brothers in conversation may be worth the price of admission in entertainment value, but the scary thing is: some people believe her. 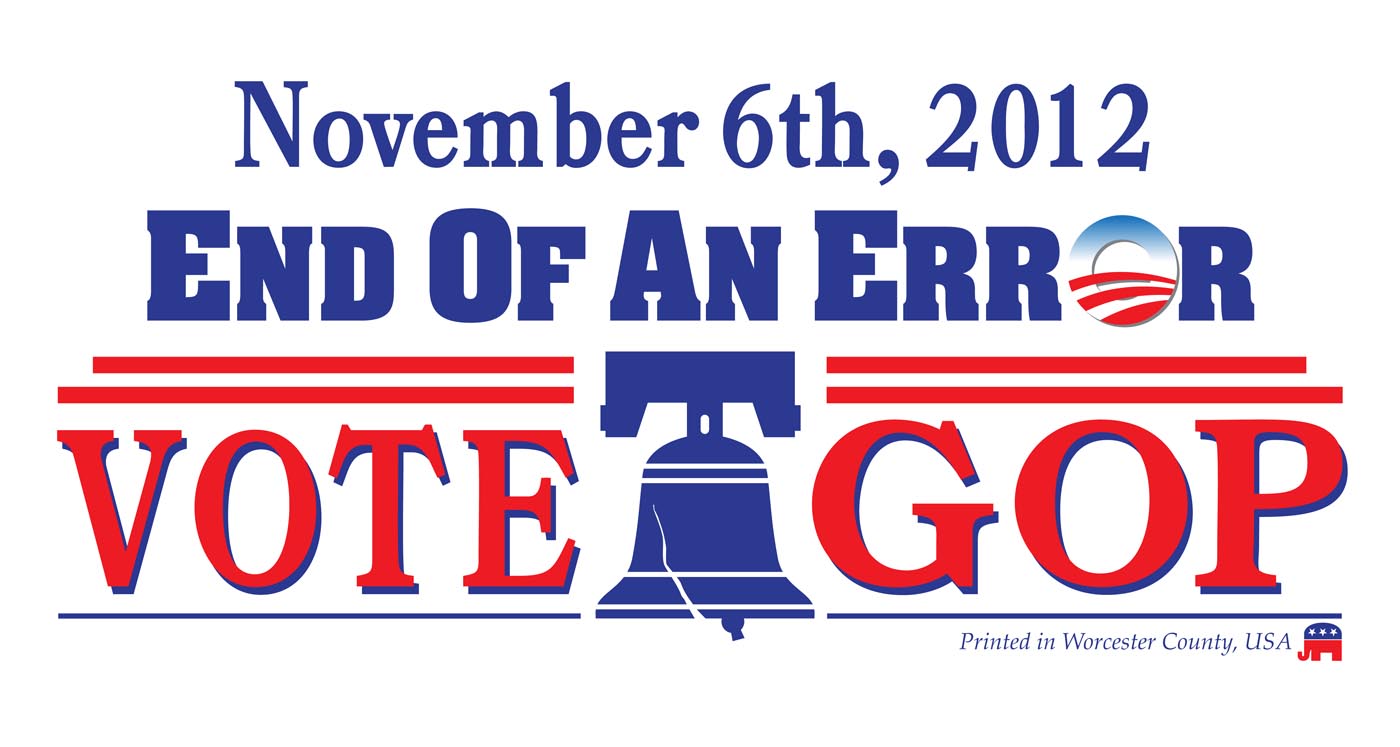 This comes from Worcester County and I have one of these shirts. And yes, I get good comments from it. You can do the same for a $15 donation to the Worcester Republican Women’s club – contact Joan Gentile: joanierags (at) verizon (dot) net.

More local reaction comes from the Wicomico Society of Patriots, which sent me a sampling of opinions on the movie “2016: Obama’s America” that’s now playing locally:

I have not seen the movie yet, but probably will before it goes away next weekend. Whatever the attendance is – even if they’re selling out theaters around the country – you can bet your bottom dollar that pressure is being brought to bear to get that movie out of there by next week.

Speaking of upcoming events but looking at a state level, while Maryland and Virginia have had a family feud of sorts through their respective governors, a guy who knows something about family feuds is doing a fundraiser for Maryland businesses.

I’ll let Jim Pettit pick it up from here – he’s good at this sort of thing:

“We don’t think politics and business in Maryland is a laughing matter,” said MBLPAC Chair Cal Ewing, “but we do think it is important for business to come together and support a shared goal – a better business climate in Maryland to create jobs.”

The PAC is an offshoot of the Maryland Business for Responsive Government group which is frequently cited on this site. Eventually they’d like to raise $250,000 for the 2014 election and Anderson’s appearance will help them get there $100 at a time.

Finally, I thought it was worth pointing out that Democrats seem to make up rules as they go along. I know that’s not news to many of you, but Senator E. J. Pipkin and Delegate Michael Smigiel believe the recently-passed gambling bill violates the Maryland Constitution on two fronts:

Of course, since the Attorney General is a Democrat that complaint, however valid, will get nowhere fast. It’s another reason to vote AGAINST the gambling amendment, Question 7. Let’s make that an unlucky number for a General Assembly majority disinterested in proper process of law.

Somehow I made it through without mentioning Dan Bongino or Andy Harris. Oops, I guess I just did, didn’t I? That’s quite all right, both are worth mentioning.

Oh, one more thing as I toot my own horn. Tomorrow afternoon in the 4:00 hour (around 4:15 is what I’m told) I will be a guest on Blaine Young’s WFMD radio show. We’ll be discussing my book So We May Breathe Free. I asked about the possibility when he was here and we made it happen.

One thought on “Odds and ends number 57”