Citing the fact he’s been “inundated with work and family” thus “cannot mount (the) serious campaign that is needed for such…a race,” Republican County Council at-large hopeful Ryan Hohman will withdraw today. For the moment, his departure leaves no Republican to team up with incumbent John Cannon should he decide to seek a second County Council term.

The fate of another race affecting Wicomico residents who live in District 38A may also be decided in a matter of days.

(continued on my Examiner.com page…)

One thing I didn’t add is that the rumor mill has at least three Republicans supposedly interested in the seat, but out of respect to them and to Delegate Elmore I’ll wait until something becomes official.

As the campaign season begins to hit its stride, we’re finding a larger and larger share of our attendance comes from those having something to do with a campaign, and this was the case tonight at the WCRC meeting.

Of course, we kicked things off in the usual way with the Lord’s Prayer, Pledge of Allegiance, reading of the April minutes, and treasurer’s report. That went by rather quickly so we could hear from our featured speaker.

Originally we had arranged to hear from former U.S. Senate and Lieutenant Governor hopeful Carmen Amedori, but she graciously bowed out of her speaking engagement when she exited the race. Fortunately, the speaker we wanted for April was available and Delegate Jeannie Haddaway-Riccio gave us the rundown of this year’s General Assembly session. 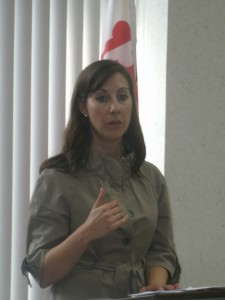 It’s somewhat depressing to know that over 2,700 bills were introduced in a short 90-day span of time, but that’s how many they had. Obviously the most important ones had to do with the state’s budget, and given the state’s budgetary rules having the House Appropriations Committee cut $11.7 million out of it was a surprise (as was the $9.3 million cut by their Senate counterparts.) Not so shocking was the $12 million supplemental budget taken from federal stimulus funds which actually increased Governor O’Malley’s original budget.

Haddaway-Riccio told us that voted against that whole mess while stating “a reduction in increase is not a cut.” She also warned that a bloated capital budget “almost guarantees an increase in property taxes” because we’re close to our borrowing limits.

Yet the Republicans were not “the party of no” as they proposed alternatives. Some examples of cuts were eliminating Medicaid fraud and abuse (saving $195 million), reducing executive branch salaries to $1 below Governor O’Malley’s ($2.3 million) and eliminating out-of-state travel expenses ($1.9 million.)

But the news wasn’t completely bad. She had helped pass a job creation tax credit (albeit with several strings attached) and also had helped with enhancing Jessica’s Law, working with business interests to grandfather in projects already in progress from onerous (“way overreaching”) stormwater regulations, and expanded the services nurse providers could provide – something which helps areas with a shortage of doctors such as the Lower Shore.

Needless to say, Jeannie did believe the business climate could be improved – otherwise “we’re chasing our tax base out of the state.

As for the future, Haddaway-Riccio thought it was important not just to put a Republican in the governor’s chair but also to increase their numbers in the General Assembly. Having just 1/3 of the seats (47 in the House, 16 in the Senate) would allow GOP legislation to be brought to the floor and not locked in a committee chair’s desk drawer. It also helps at the committee and subcommittee levels where we can best effect necessary changes.

To Jeannie, the next steps for the state would be to put our fiscal house in order, address the poor business climate, and better balance the economy and environment, a balancing act she believed could be achieved.

While many of the questions were clarifications of items she’d gone over before, a couple stuck out. Jeannie brought up the attempt to impeach AG Doug Gansler by Delegate Dwyer as an example of the need for better accountability and more transparency. She also revealed that a clone of Arizona’s SB1070 would be introduced next term by Delegate Pat McDonough.

Mark Biehl gave the Lower Shore Young Republican report – their food drive netted over $100 cash and 200 food items, which is a start. Next year they would challenge other stores to get involved. Also, the Maryland YR convention will be in Salisbury June 18-19 with other states participating in the gathering too. Featured speakers will include Bob Ehrlich, Audrey Scott, and Andy Harris, along with RNC staffers.

As for the Central Committee, John Bartkovich showed off our hardware (the Aris T. Allen Award we received at the state convention) and asked we keep up the momentum of candidate recruitment. Several future events are in the works (Farm and Home Show, Autumn Wine Fest), we need good sign locations, and our newest associate member is a familiar face – Cynthia Williams agreed to come back into the fold (she was a predecessor of mine on the WCRCC.)

We then launched into a series of campaign updates. 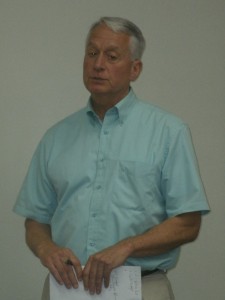 Joe Ollinger began by giving us a brief rundown of his biography as a retired businessman who came here nearly thirty years ago to begin his own company. This gave him the perspective of “an outsider looking in” to the county’s government as opposed to the incumbent’s view from the inside looking out. It was a contrast of having the background in government operations which Rick Pollitt has compared to the leadership Joe pledged to exhibit.

As of now, Ollinger has no events set but the campaign is working on both that and literature to hand out. He will attend the Americans for Prosperity meeting on Wednesday night, though, and his website is up and running.

Mark McIver was “humbled and excited” about being recommended to run Bob Ehrlich’s local campaign; that is, until he was told he needed to win the county with 70% of the vote and help bring more House and Senate candidates in. Yet this was a doable goal, particularly when he’s teaming up with Worcester and Somerset counties and other candidates to help out. 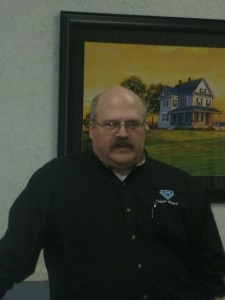 One of those candidates surely will be Andy Harris. Ed Nelson represents the Harris forces locally and announced Andy will be the featured speaker at Wednesday’s AFP meeting. Key items for him were a local fundraiser June 16, a meet the candidate breakfat later that month, and getting sign placements along U.S. 50 – Wicomico has its share but Ed would like more before Memorial Day.

The one thing holding back Bob McCarroll’s campaign is the lack of a treasurer since his original choice had to back out, but once he has that locked up he’s going to hit the ground running. The District 37A hopeful can still get to events and press the flesh so I anticipate he’ll be spreading the word using some good old-fashioned shoe leather for the moment.

As for Michael James, State Senate candidate in District 38, “things are going great” according to Dustin Mills. Voters who were longtime Democrats seem to be swinging Michael’s way, and James has been very visible at several recent events. 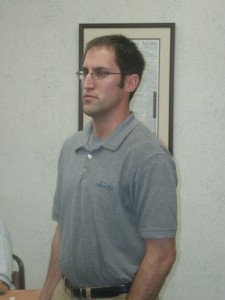 Ryan Hohman is another first-time candidate getting things started, although he does have the advantage of a campaign treasurer. Ryan is running for one of the two Wicomico County Council at-large seats, presumably to replace departing Councilman Bill McCain, who chose not to seek re-election. He’s ready to start knocking on doors and getting his campaign in full swing.

Speaking on behalf of District 38B Delegate aspirant Mike McDermott, Sean Jester noted that his campaign needs volunteers (naturally, since Sean is the volunteer coordinator.) He also pointed out a curious fact – Worcester County has not been represented by a Republican in the House of Delegates since 1874. Time for a 136 year streak to end!

Don Coffin gave a report on the Jim Rutledge fundraiser last Saturday. There were a few Democrats there who were willing to switch parties just to vote for Jim, and moneywise it was quite a success. Coffin noted that Saturday was his first fundraiser and now he know “the dos and don’ts” of hosting an event. Don also volunteered a number of area sign locations to candidates meeting his standards. 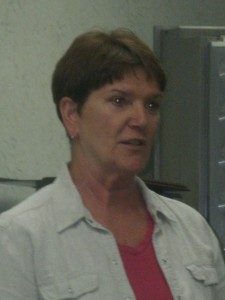 Jeannie Haddaway-Riccio gained back the floor briefly to mention a fundraiser for Bob Ehrlich which will be held June 13 at Sailwinds Park in Cambridge.

Finally, Gail Bartkovich announced that she’d filed to run for re-election and she was ready to campaign. The County Council president represents District 3, which encompasses the eastern and southeastern sections of Wicomico County.

While he’s not a candidate, Woody Willing mentioned that the club’s Crab Feast is coming sooner than we might think – August 28 is the date. He also noted for the benefit of the candidates there that not all polling places allow signs on their property.

With that, the meeting came to an end although most of the candidates stayed around to pick up supporters and volunteers. The next meeting will be June 28 with social time at 6:30 and meeting at 7:00 – speaker is to be determined but we have invited a statewide candidate.

Originally I was going to make this a simple comment to Julie’s post but figured I’d rather have the forum to myself – she can feel free to link to my reaction.

I look at it this way, as a logical manner. The County Council meets twice a month and we have five months remaining until the general election – in other words, ten meetings.

Under the rules in place, two of these meetings (July 6 and October 5) would be held at night, with the other eight being morning meetings.

With the compromise measure, five meetings would be night meetings and five would be daytime. Right now, the difference is three meetings. Certainly that would be a better situation for some, but for me it wouldn’t be the ideal hill to die on. Even Prettyman is quoted as saying she has nothing against night meetings despite the fact she voted against the latest effort, which lost in a 3-3 tie because John Cannon was away tending to family matters.

My point is that we have a ready-made issue for the next election, and the dynamics are interesting.

The loudest opponents of going to a totally evening schedule have been Bill McCain and David MacLeod, both Democrats. We already know McCain isn’t running again, so presumably we can pick up a vote there.

Meanwhile, the Republicans on County Council have generally favored the switch. We all know Stevie Prettyman is running again as is Gail Bartkovich and presumably Joe Holloway. It leaves John Cannon and Sheree Sample-Hughes as swing votes; however, Sheree’s affirmative vote on the last proposal may be in some part because she is the first County Council member to draw an opponent in Dave Goslee, Jr.

Former Councilman Ed Taylor and newcomer Ryan Hohman are in the race for at-large County Council positions (one of which will open up with McCain’s departure) and their stance on the night meetings can be made into an issue as well.

So, I suppose my thought is not to sweat the small stuff but make it into an issue of good government where leadership on the concept can be rewarded this November at the ballot box.