Once again I have a potpourri of items that I think need between a couple sentences and three paragraphs, so here goes.

Over the last few months I have followed the saga of atheists who have tried to have the Bladensburg Peace Cross removed thanks to attorney and second-time U.S. Senate candidate Richard Douglas. Early last week a federal judge dismissed the case in a brief, two-page order, although the plaintiffs promised to appeal. Douglas called the decision “a good day for liberty,” and I tend to agree. Kudos to the good barrister for lending a hand.

Something Douglas has stressed in his populist campaign is the plight of the working man. So while manufacturing jobs held relatively steady over the last couple months, those who advocate for manufacturing thought the job report was rather bleak. “It’s the latest evidence that manufacturing in America is at or near a state of recession,” said Alliance for American Manufacturing (AAM) head Scott Paul. “While much of the service sector is growing albeit with low wages, our goods-producing economy is struggling under the yoke of global weakness and China’s massive industrial overcapacity.”

That imbalance with China was also the subject of print ads sponsored by another industry group, the U.S. Business & Industry Council. 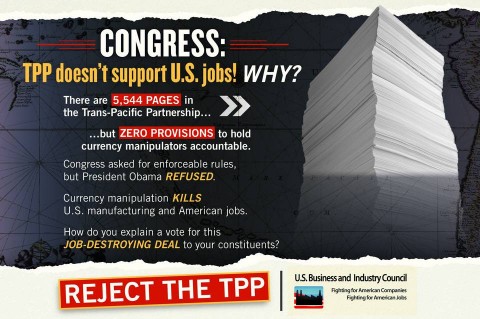 Their point is simple: there were no currency manipulation provisions included. While China, which has a long-standing reputation for the practice, is not a part of the TPP, other members have also been accused of similar tricks. The USBIC apparently desires a united front among many of China’s regional trading partners.

Those who can’t find jobs often need government assistance such as food stamps (now known as SNAP.) But the state of Maine recently grabbed the notice of the Daily Signal for a proposal to ban the purchase of junk food and pop with EBT cards. Certainly to some it would border on nanny statism, but the state argues that:

“Our current food stamp policy lets water in one end of the boat while bailing out the other,” said DHHS Commissioner Mary Mayhew. “If we’re going to spend millions on nutrition education for food stamp recipients, we should stop giving them money to buy candy and soda. Maine is facing an obesity epidemic, especially among its low-income population, and we should be solving that problem rather than enabling it.”

In short, if you wish to gorge yourself on Skittles and Mountain Dew, find a job and get off the dole. Maine has cracked down on welfare programs since Governor Paul LePage took office – maybe Larry Hogan should pay attention.

Someone in Hogan’s administration got the hot water turned up on him, as the James O’Keefe video I talked about a few days back had the sequel. Now we know his deputy isn’t particularly into martial fidelity, but then again we sort of factor that into the equation anymore. This guy named Clinton was elected president for doing far worse, so perhaps being on the large end of the Project Veritas telescope will be a resume enhancer for this liberal deputy AG.

Chances are, though, soon Thiruvendran “Thiru” Vignarajah will be ignored by the media, sort of like what we’re advised to do by columnist, fill-in radio host, and would-be Congressman Dan Bongino regarding Barack Obama. Whether it’s gun control, border security, Syrian refugees, or simply his method of leadership, America is better going in the opposite direction our feckless President desires us to go. Simple advice that’s worth the read, as Dan often is.

Yet Obama’s government is still powerful and has the capacity to make peoples’ lives miserable. Take the Internal Revenue Service and a new proposed rule that will ask nonprofits to keep Social Security numbers for donors who give more than $250. Tonya Tiffany of MDCAN got her moment of fame as an advocate against this regulation.

Those who are interested in stating their case have until December 16 to go here and give their opinion. Operations which only have sporadic activities and run on a shoestring would be most affected, and MDCAN falls under that umbrella as their primary activity is the Turning the Tides conference each January.

The IRS wants to make non-profit organizations responsible for storing and reporting the Social Security Numbers for anyone who donates more than $250. This will burden the non-profits financially as well as increase your chances of having your identity stolen. It could also make it easier for the IRS to target organizations based on politics and move on to also targeting the private individuals who support those organizations.

On the latter point, I think back to the emotion surrounding donations to the side supporting Proposition 8 in California some years back (in favor of traditional marriage.) Even years later, those who chose to donate in its favor had to deal with its fallout. Instead of harassment from a group, though, imagine the full weight of the government harassing donors. The system isn’t really broken so there’s no need to fix it.

There’s no need to fix my e-mailbox, either. While it’s not completely empty, the remaining items deserve more of a hearing. Look for these in the next few days.

It’s pretty likely my readers are familiar with Project Veritas journalist James O’Keefe, who is best known for being the man behind videos recorded undercover much like investigative journalism used to be done by “60 Minutes” and other such shows. His latest target has drawn interest from journalists around the state because Thiruvendran “Thiru” Vignarajah is a Deputy Attorney General for the state of Maryland. In eleven minutes we found out he’s a closet gun grabber (which seems to be a prerequisite for working with Maryland AG Brian Frosh), he has no real issue with giving out privileged information (although most of us could have guessed this would be the outcome), his boss doesn’t want to be governor, and he’s trapped in a loveless marriage. (Given the situation the undercover journalist put herself into, one has to wonder what Vignarajah does off-hours at these conferences. Meeting in a non-public place is a little suspicious.)

But the coverage of this footage, whether local, state, or national, prefaces their description of O’Keefe as “conservative” journalist. Yet you never hear about stories coming from the “liberal” New York Times or “left-leaning” Washington Post. It’s evident the reporting is trying to defend Vignarajah as a victim of “gotcha” biased conservative journalism with ulterior motives.

Yet, as always, the truth is somewhere in the middle. While it’s rather embarrassing for the Deputy AG to admit there are times he doesn’t know what he’s doing, it’s not like he’s an elected official we can recall. Last year we had the chance to put in an Attorney General who wouldn’t be anti-Second Amendment or be a party on the job-killing side of a lawsuit but the people voted to elect Brian Frosh, who in turn hired Vignarajah. For the deputy, the worst he could do is get fired; someone will hire him in something he specializes in.

All this video does is reinforce a couple of stereotypes and confirm Frosh doesn’t have the best judgment in his hiring. With the Planned Parenthood videos driving the news cycle over the summer, perhaps this is O’Keefe’s way of getting back into the limelight. It may play well in Peoria, but those of us in Maryland who know how that side works have already priced this into the political equation. In short, it’s no big deal.