Over the summer in Salisbury, there has been a controversy over a plaque in front of the courthouse that honors a native of what would become Wicomico County after his death. Brigadier General John Henry Winder was a West Point graduate and veteran of the Mexican-American War, but he also played a role in the War Between the States as a military prison commander in the Confederate army, and that trivial fact has enraged a certain segment of the community.

The plaque itself dates from the mid-1960s, as it was placed by a commission created to mark the centennial of the Civil War. Its original location along U.S. 13 made it a target for wayward drivers, so it was relocated in 1983 to its present location on the front yard of the old county courthouse, facing south along East Main Street. (The old courthouse itself fronts North Division Street, so the plaque is sort of off to the side. In truth, visitors to the courthouse seldom see the monument as it’s on the back side of the more recent addition to the county’s halls of justice, where most enter.)

Last week an incident at the courthouse reignited the uproar, as two men were charged with malicious destruction of property after chalking up the building and walks leading up to it with various slogans and phrases indicating their displeasure with the monument’s presence.

With that background in mind, know that I decided to drop by an event on Friday that I’ve been meaning to check out but hadn’t. The final edition of “Fridays at Five” for the year was this past Friday and even though I had a family function later that evening I decided to go scan the scene. As parties go, it was comparatively modest: a beer truck and team of two DJs surrounded by a host of games to amuse the partygoers. But there were also a couple of buckets of chalk there and I think these gentlemen weren’t through with their messaging. 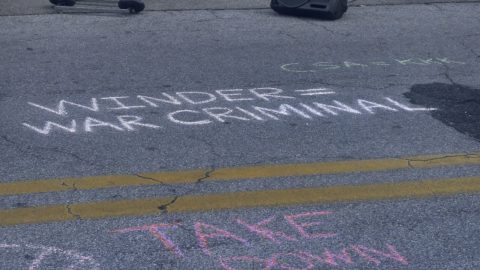 Yes, these guys were just the life of the party, all right. 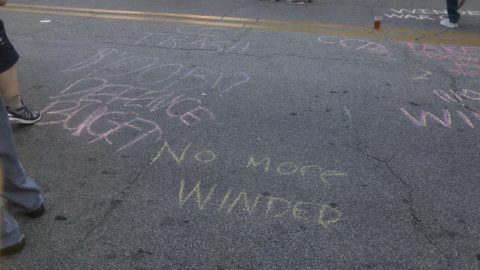 And not only were they being blowhards about a dead subject – the plaque’s not going anywhere fast unless another criminal act is perpetrated – but they’re not too bright, either. “Buget”? (He tried to fit a “d” in after it was pointed out to him.)

While he’s pretty close on the number, there’s a reason it’s so high: sequestration. It didn’t seem like anything else on the budget was subject to it, but something that’s Constitutionally mandated was. And the FY18 defense budget had bipartisan support.

Since the chalk was going to be used anyway, I had my own little message, set off to the side.

Because I’m not a professional chalker, this is what it says: “Let history be history, work to a better future.”

I say just leave the Winder plaque where it is, because it’s not hurting anyone and nary a complaint had been made about it for 33 years until a certain president was elected. Now if they want to commemorate other things that occurred there, let them go through the proper channels (since I believe these are state-sponsored monuments) and see if there can be monuments to the lynchings or slave trading that may have taken place in downtown Salisbury.

With so many more important issues and problems in our community, worrying about a plaque seems a waste of time. Notice I’ve been relatively quiet about the whole NFL kneeling for the National Anthem thing because there are more important things in life for me to obsess over – if NFL players want to cut their collective economic throats, people can do other things on Sunday. I don’t really worry about football season until the World Series is over, anyway.

And with the news of the Las Vegas massacre, it’s a reminder that we have serious issues which demand that we hug our loved ones a little tighter and not be as offended with things we don’t wish to read.