Most of the attention from a Washington Post article and poll released this morning regarding Maryland’s U.S. Senate race went to a pitched battle between two current members of Congress: Donna Edwards and Chris Van Hollen are fighting it out for the Democratic nomination, which the Post treats as the de facto election.

But the WaPo poll, conducted in conjunction with the University of Maryland, asked Republican respondents about their Senatorial preferences and the big winner – well over the staggering 7.5 point margin of error for the likely voters – was good old Mr. Undecided with 46 (!) percent. Yes, nearly half the voters are still hazy about their choice less than a month before the primary election.

In case you were wondering, these are the results from those who had made up their mind among likely voters:

I’m a little surprised that Dave Wallace or Greg Holmes were not included in the poll, as they both ran Congressional campaigns in 2014 and should have had a little name ID among Republicans. There were 1% who volunteered another name, which translates to 3 out of a sample of 283 likely voters. In that universe, Szeliga should have about 42.

However, among the 407 registered voters (margin of error 6%):

It’s obvious the Presidential race on the GOP side has sucked a lot of the oxygen out of the Senatorial race. You may be devoted to Cruz, Kasich, or Trump but not particular about any of these candidates because you haven’t heard of them. To change that on her part, according to social media, Szeliga is getting out a television ad in the next few days:

My granddaughter, Avery, definitely stole the spotlight while we were filming the first television ad for my US Senate campaign yesterday.

But I wonder about the runner-up’s math. 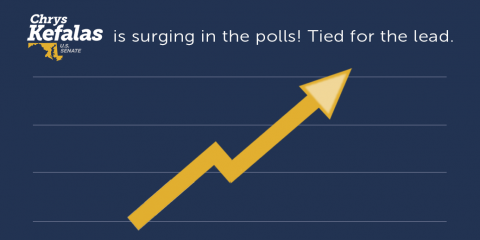 Perhaps within the margin of error is the new “tied.” Richard Douglas can say the same thing, and in theory I could too – I could have as much as 7.5% and Kathy Szeliga could have 7.5% among likely voters based on the MOE.

With such a huge pool of undecided voters this close to the election, I would be surprised if any of the candidates came to the Eastern Shore from here on out, at least more than once. Our local campaign will be waged on the airwaves and through volunteers because, quite frankly, the 115,635 Republicans scattered around the Eastern Shore are less suitable for retail politics via candidate appearance than those Republicans in Anne Arundel, Baltimore, or Montgomery counties – any of which have more GOP voters within their boundaries than the whole of the Eastern Shore. Pick any pair between Carroll, Frederick, Harford, and Howard counties and you will find the same. (All bets are off, of course, if we somehow get a local Presidential candidate appearance.)

So if a couple nice people come knocking on your door looking for your support, chances are it will be local volunteers for one of these downballot races. Name recognition will be the big push over the last three weeks.

One thought on “WaPo poll: one big leader in GOP race”