Editor’s note: While I was off on my honeymoon, Cathy Keim took the lead and attended Congressional challenger Mike Smigiel’s Second Amendment townhall meeting Saturday. She filed this report on the proceedings.

I dropped by the 2A Townhall on Saturday, February 6, at Headquarters Live here in Salisbury. Former Delegate Mike Smigiel, who is running for Congress as a Republican in the First Congressional district, is holding 2A Townhall meetings around the district to address the ex post facto confiscation of guns for old offenses prior to the passage of the Firearm Safety Act of 2013 (SB 281). 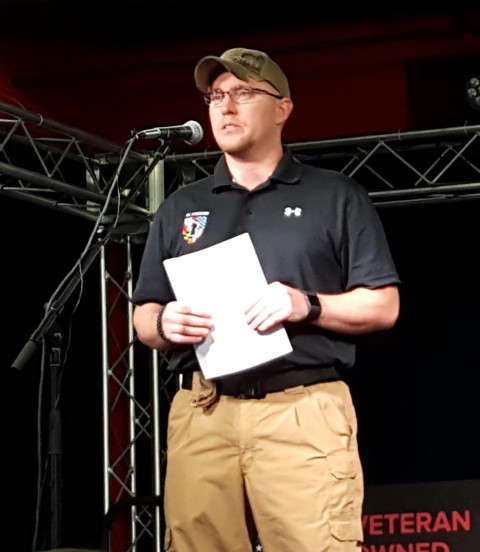 First to speak at the Smigiel event, though, was Justin Trader, a former Marine who now runs D. I. Strategic, LLC, here in Salisbury. “The Second Amendment is the ultimate safeguard to protect our rights,” said Trader, adding that it is not just about hunting or collecting guns; instead the amendment’s main purpose is to safeguard us from tyranny amongst us. He quoted Abraham Lincoln that the enemy which destroys America would not be from far away, but from amongst us. Justin also believed that today we are under the government that our founders warned us about. 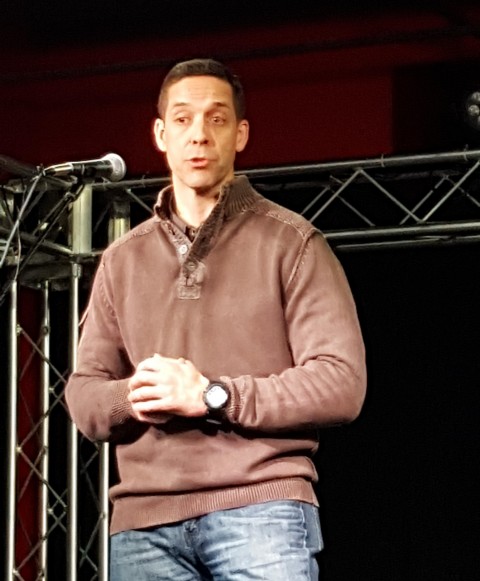 Next up was retired Maryland State Police (MSP) Captain Jack McCauley, who was the former commander of their Licensing Division. That agency is the one which oversees background checks for firearms in the state. McCauley spoke about being asked to testify before the House Judiciary Committee about SB281 back when it was being debated in 2013. Smigiel, who was a Delegate at the time, asked him if the ban of certain guns would have an effect on crime. But when McCauley tried to answer the question, Governor O’Malley’s lawyer advised him not to. McCauley was shocked because he thought the whole purpose of his appearance was to answer questions.

The hearing erupted in arguments, but Captain McCauley did not answer the question in order to obey the direct order of an agent of the governor’s office. Later, after the hearing, the agent told him that she directed him not to answer because the bill was “not about policy – it is just votes.”

This served as the wakeup call for McCauley, who realized the Firearm Safety Act was all politics and had nothing to do with the safety of the citizens. The Governor’s office was only interested in the number of guns seized, so it really didn’t matter whether manpower was wasted doing work that would not increase safety or decrease crime.

Had McCauley answered Smigiel’s question at the committee hearing, McCauley would have answered that the law would not decrease crime at all. For one thing, the banned weapons were rarely used in crimes. Secondly, the restriction on the magazines to only ten rounds would not stop people from buying larger magazines from out of state, but would only restrict which guns and magazines could be bought in Maryland by law-abiding citizens.

The O’Malley administration was only concerned with the political capital to be gained by passing the law, continued McCauley, and not whether it was a good law or whether it would actually achieve any reduction in crime. McCauley contends that by forcing the MSP to do three background checks on every citizen that wants to buy a handgun, valuable manpower is being wasted doing paperwork instead of being out on the streets.

McCauley concluded by noting that he resigned so that he could tell the truth. It was his belief that there was only one legislator working for the people and that legislator was Mike Smigiel. 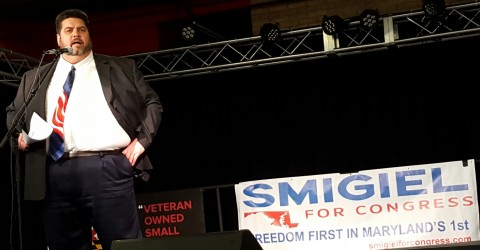 Once those two speakers set the stage, Smigiel came up to present his concerns about Maryland’s treatment of the Second Amendment. Smigiel revealed that he had come to Headquarters Live at the request of Jeremy Norton, the man who runs both that venue and Roadie Joe’s, the location of the fundraiser that followed the townhall meeting.

Mike explained that Jeremy had contacted him in response to an event which had occurred to Norton, but one which was occurring all across Maryland. As a businessman and a gun owner, Norton was given clearance to own his guns. But after SB281 was passed the MSP began checking the records for prior offenses that would not have precluded legal ownership prior to SB281’s passage, but now would affect their legal right to own a gun. Smigiel alleged that the MSP was showing up at gunowners’ homes, without warrants, and asking for their registered guns.

In Norton’s case, a juvenile conviction for selling a small amount of marijuana was enough to give the MSP reason to confiscate his guns, alleging that under SB281 he was now disqualified. However, since it was a juvenile offense, he will be eligible to reclaim his guns when he turns 30. (Isn’t that just charitable of the state of Maryland?)

This provision of the law also traps those who may have committed a crime decades ago; when the penalty changed to require a longer sentence some were suddenly retroactively determined to be unfit to possess a gun according to the state of Maryland. Needless to say, Mike is concerned that this law will lead to an unnecessary tragedy because the MSP sends plainclothes police to confiscate guns. Smigiel has spoken to Governor Hogan’s office and asked him to intervene before a tragedy occurs.

Mike has also written an article in the Maryland Bar Journal that covers the issue, where he concludes:

In light of the Doe court’s position prohibiting the ex post facto application of the law against convicted sex offenders, it is unconscionable that the Maryland State Police could continue applying gun laws, ex post facto, against citizens who are merely wishing to continue exercising their Second Amendment rights.

Jack McCauley stated in the Q&A that followed that gun confiscation schemes are ineffective in reducing crime, so why waste time harassing law abiding citizens?

Yet the whole mindset of the progressives in their battle to disarm America seems to be their pure-hearted conviction that the only way to make us safe is to disarm everybody. Facts to the contrary do not impinge upon their plans.

Once again we see that the battle for our country is waged in the hearts and minds of citizens that have opposing views of reality. The progressive supporters have embraced the propaganda that is being churned out daily by the media, the leadership, the schools, and Hollywood. Just as they will believe in global warming despite the lack of evidence, they will confiscate guns in spite of the abundance of evidence saying it will not make us safer.

While he’s actively trying to win a Congressional seat, Smigiel really didn’t speak about his campaign at the townhall meeting. But his determination to follow his principles and to fight for our Constitutional rights came through loud and clear. From his record as a Delegate, one can see that he will stand his ground if elected to Congress. Personally I have no doubt that he would continue to be a Constitutionalist despite the pressures of the lobbyists and donor class.