Before I step aside for a few days, there are some things I’ve been meaning to push. I’ll do these in chronological order of occurrence. 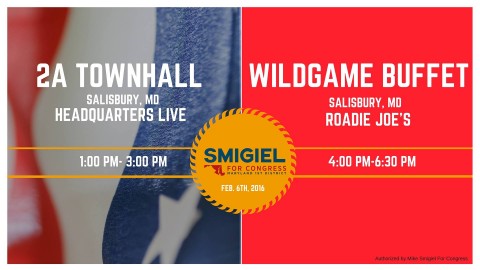 I had wondered when the First District challenger would have an event in Salisbury, but he has the uncharacteristic bad luck of picking the weekend I’m away (this Saturday) to do a combination townhall and fundraiser at two popular downtown venues. So I will just pass this on without additional comment, except for noting that the Roadie Joe’s event is $40 (or $30 if you’re wearing camo or hunter orange.)

Another would-be challenger is bringing one of the last stops on his three-day announcement tour to Salisbury University next Wednesday. SU is the penultimate stop on the tour for U.S. Senate candidate Dave Wallace, who will stop at Holloway Hall next Wednesday, February 10th, around 4 p.m. (His day will wrap up in Easton before returning the vehicle to the Western Shore.)

As his campaign’s advance person pointed out:

If you have owned or operated a business on the Eastern Shore, you know how hard it has been to work with all the new laws, regulations, fees and taxes. When did Senator Barbara Mikulski, our Democrat US Senator for 30 years, decide to work with Safran Labinal, one of Wicomico County’s largest companies, with more than 650 workers?  When they announced they were moving to Denton, Texas – a bit too late, don’t you think?  Have you wondered why Perdue AgriBusiness is planning to build their corporate offices in Delmar, DE? Could it be that Delaware is more business friendly?

Wallace will be the second candidate to announce in Salisbury, as Kathy Szeliga made a swing through town in November.

Finally, I took advantage of a rare weekday off to attend yesterday’s Republican Women of Wicomico monthly meeting. (Yes, there were three guys there, including speaker Muir Boda.) But they wanted me to pass along word of their Paint Night fundraiser on Thursday, February 11 at Brew River. It goes from 6 to 8 p.m. and the cost is $40. Men are invited and encouraged to both attend the fundraiser and be associate members of the group, said RWOW president Julie Brewington. (Associate membership is only $15, if I recall correctly, and they run a pretty good meeting.)

This should fill the political calendar pretty well.