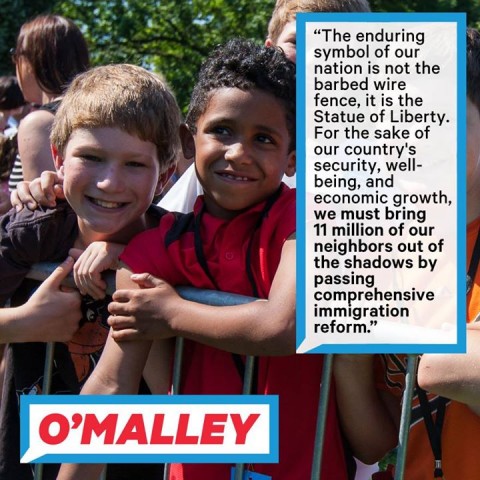 THIS is what happens when Americans aren’t taught history.

Our former governor, who gave illegal aliens in-state tuition if they were lucky enough to have their parents make it across the border without being caught and properly tossed out of the country until they go through the proper processes to stay, now believes in “comprehensive immigration reform.” According to his “vision” page, this is what Martin O’Malley considers comprehensive immigration reform:

Bringing undocumented immigrants out of the shadows will grow our economy, expand our tax base, create jobs and lift wages – benefiting our country as a whole. We must boldly advance comprehensive immigration reform, while also using executive action to its full authority to end unnecessary detentions and expand deferred action. As Americans, when refugee children arrive on our doorstep, we shouldn’t turn them away—we should act like the generous, compassionate people we are.

Here are the series of questions I have regarding all these claims:

And it’s interesting that O’Malley brings up the Statue of Liberty. At one time, Ellis Island was the main entry point for immigrants, who were checked for health and whether they had criminal records. Eventually there was a prohibition on children arriving without adults during this era, which ended when President Harding signed the Immigration Quota Act in 1921. So while the Statue of Liberty has been a beckoning symbol for well over a century, for much of our history we were very selective on those we would allow into the country.

Further, immigrants of that era were not given the benefit of a welfare state or catered to in their native language. Certainly we had enclaves of Germans, Poles, Italians, and so forth, but eventually these families were expected to assimilate to one degree or another.

To me, true immigration reform would return to that time of quotas and strident checking. Those who immigrate legally go through a lot of red tape to get their green cards, only to see those who bypass the process get preferential treatment. I understand life is less than fair, but that is patently unfair to those who are doing it the right way.

And to those who say we can’t round up and deport 11 million illegals? It’s been done, and if the political will is there we can do it again. Most of them would self-deport once the word got out we were serious.

Let’s face it. The real need for reform is on the other side of the border, where our economy and largess has been a crutch to many nations for far too long. When remittances make up over 1/6 of a nation’s economy, this is an issue. (Surprisingly, the share in Mexico is quite low, but they are still a larger share of GDP than tourism.)

For the true sake of our country’s security, well-being, and economic growth, we need to rethink our immigration policies, restoring them to the point where we can be selective in who we choose to admit. It doesn’t mean we won’t accept people who work hard, but it does mean we want them to become Americans first and dissolve into our vast melting pot – as my German and Polish forefathers did over a century ago.

One thought on “The wrong idea”