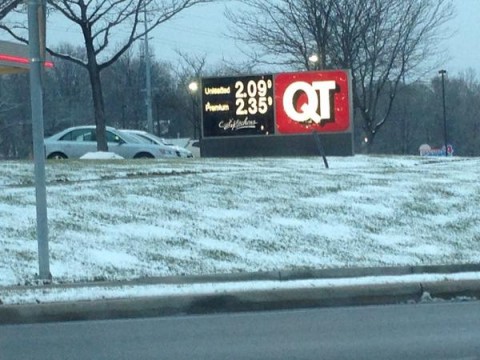 I wrote a little bit about the 2012 contenders yesterday in a piece about 2016, but I’ve been seeing the evidence that Newt Gingrich’s thought and 2012 campaign plank that we could once again see gasoline at $2.50 a gallon (or less, as the recent photo above from my Missouri-based writer friend Melinda Musil demonstrates) has come true despite naysayers from just a short year or so ago. Yet despite experts who called the idea “absurd” and noted “the price of oil is set on a global market” and decreed “in the immediate term there is almost nothing you can do,” well, here we are. Musil reported yesterday her prices are now under $2 a gallon.

The reason prices are so much lower is pretty much what Gingrich proposed to do in the 2012 campaign: increased production. With fracking and other enhancements in technology allowing domestic output to increase, the benefits have been enormous. Considering that average prices going into the July 4 holiday hovered over $3.60 a gallon, the relief expressed by drivers may begin spilling over into the economy at-large. Now the average is about $2.54 a gallon, with this area’s prices relatively close to that point.

Over time, the benefits will be accruing to consumers – if an Eastern Shore driver goes 20,000 miles a year in a truck that gets 20 miles per gallon, spending $1 less a gallon for a year is equivalent to a $1,000 annual raise that’s tax free. On the other hand, this decline in prices is thwarting the state of Maryland’s scheme to take more out of our pockets by increasing the sales tax on gas, because as I noted a few days back their 8 cents per gallon projected revenue is sinking closer to a nickel. Luckily, the state government over the next four years will desperately try not to confiscate any more revenue from working folks like us thanks to the recent election, and this tailwind could help Governor-elect Hogan address the state’s structural deficit through a modest increase in economic activity.

It’s doubtful that our prices will stay quite this low, for oil at $60 a barrel means our extraction with its price point that’s a little bit higher isn’t sustainable in the long term. But there is the chance that more practice with these unconventional techniques could drive down production costs to a point where our producers could prosper at that price or even below – if we could match the Saudis’ lower extraction cost we could wipe out the OPEC cartel once and for all.

So enjoy these low prices while they last. Hopefully, this modest economic bump will kickstart other sectors and bring us prosperity despite the best efforts of some in Washington – you know, the ones who try to take credit for this energy boom despite having little to do with it.

One thought on “Newt Gingrich was right after all”