Might be the easiest post I’ve had in awhile – all I have to do is cut and paste since I wrote it in the first place.

Describing himself as “steadfast and loyal,” Lt. Col. West grew up in the same Atlanta neighborhood where Dr. Martin Luther King Jr. once preached. After serving 22 years in the Army, including combat in Operation Desert Storm, Operation Iraqi Freedom, and Afghanistan, West retired in 2004, later serving as a civilian military adviser in Afghanistan.

In 2010 he was elected to serve in Congress, representing Florida’s 22nd District. After being redistricted to the 18th District, he lost a bid for re-election in 2012 by less than 1% of the vote. Since serving in Congress, West has become a Fox News Contributor, a Senior Fellow at the London Center for Policy Research, and regularly writes for numerous media outlets. He recently served as a guest host for Sean Hannity’s radio show.

“This will be an opportunity for local residents to meet and hear the most famous conservative to visit the Lower Shore within memory,” said Wicomico County Republican Party Chair Dave Parker. “West loves his country and its Constitution more than its government or his own skin color, and proves that people of every race can be Christian, patriotic, and conservative.”

“Every time I’ve had the honor to hear Lt. Col. West speak, I have been invigorated and encouraged,” added Wicomico County Republican Club president Jackie Wellfonder. “We are very grateful for the opportunity to have him here on the Eastern Shore as we get closer to election day in November. It is my hope that his message will promote a deeper level of engagement with our local conservative base.”

A number of events are slated with West:

The College Republican reception and VIP Reception will be held at the Ward Museum of Wildfowl Art, 909 South Schumaker Avenue in Salisbury. The Patriot’s Dinner will be held at the Wicomico Youth and Civic Center, 500 Glen Avenue in Salisbury. Attendees of the VIP Reception will also get free admission to the Patriot’s Dinner.

The Republican Central Committee asks that those interested in attending the VIP Reception or Patriot’s Dinner register and pay through their website or mail check payable to WCRCC with the mail-in form at the above site by September 20, to WCRCC, PO Box 252, Salisbury, MD 21803. 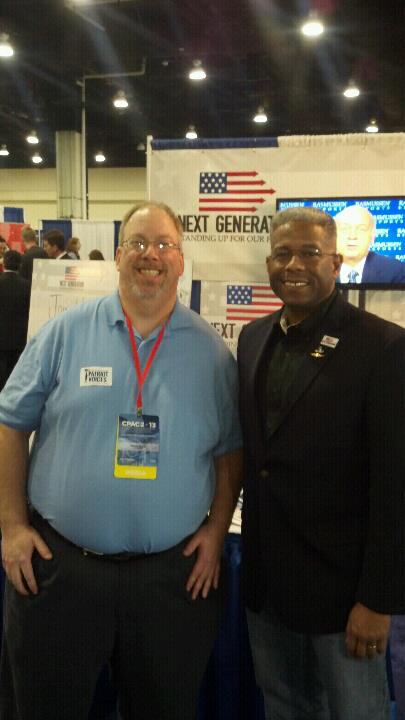 I took the liberty of deleting the media contact because I know his number already – note, though, it’s not me. I also can install the direct link to the page, and add this photo I have with Lt. Col. West from CPAC 2013. I wonder whatever happened to the Next Generation idea they were pushing – it sort of faded away after West left the scene late last year. Onward and upward, I guess.

Truly, I think this will be a fun event. We originally wanted the good Colonel to be our Lincoln Day speaker this year but couldn’t make a spring date work – so we did the next best thing. I’m hoping that we get a good enough crowd to encourage more interesting, nationally-known speakers to come to Salisbury for our events. Who would you like to see?

So yesterday I spread this out to a batch of media outlets. Let’s get people excited and motivated, shall we?