Although Jenna Johnson’s Washington Post piece described Governor Martin O’Malley as “brusque…terse and often lack(ing) patience” during a Board of Public Works meeting, that meeting still netted Dominion Resources another small step toward investing $3.8 billion into upgrading their Cove Point facility by allowing them a tidal wetlands license. O’Malley joined Comptroller Peter Franchot and Treasurer Nancy Kopp in approving the permit, leaving only federal authorities in the way. The permit was for a temporary pier to offload construction supplies for the project, which environmentalists fear will lead to further extraction of natural gas in the region for export.

To me, it wasn’t a vote O’Malley wanted to take, and he really didn’t have to – his vote against would have only made it a 2-1 decision. But to do otherwise would have left another black mark on his administration’s legacy of making Maryland one of the states most unfriendly to business in the nation, even though the permit would have gone through.

And it’s not like environmentalists aren’t winning the war despite losing that battle – the prospect of fracking in Western Maryland is growing dimmer by the day given some market saturation and the outlandish regulations proposed for drilling – never mind the possible benefits that would bring. But O’Malley had to disappoint the few hundred who are passionately opposing the remodeling of the LNG terminal in Calvert County. 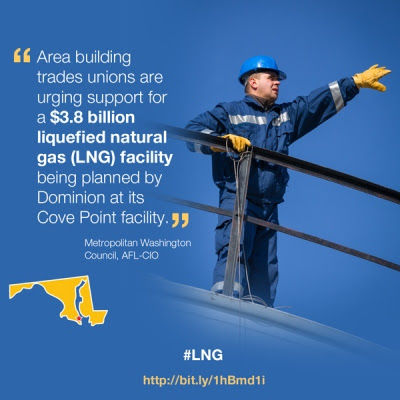 At this point, though, it’s all about promoting the legacy and let’s face it: are the environmentalists going to vote for Larry Hogan? Well, there is that slight possibility but when the Washington AFL-CIO and other trade unions support Cove Point, O’Malley can’t afford to alienate that group. That’s hundreds or even thousands of motivated voters he has to keep in the Anthony Brown camp. So Martin O’Malley will hold his nose and vote for Cove Point, all the while hoping that his buddies at the EPA or somewhere else in the federal government will bail him out by turning thumbs-down on the project at a late stage. After all, if they can stall the Keystone XL pipeline for this long, pushing back a project just a few miles outside Washington, D.C. is almost a no-brainer to them.

So when Martin O’Malley acts like a petulant child in a meeting because he knows he has to take an unpopular vote, we shouldn’t feel any sympathy for him. He’s left a whole lot on the table insofar as benefiting from our American energy boom goes and he knows it.