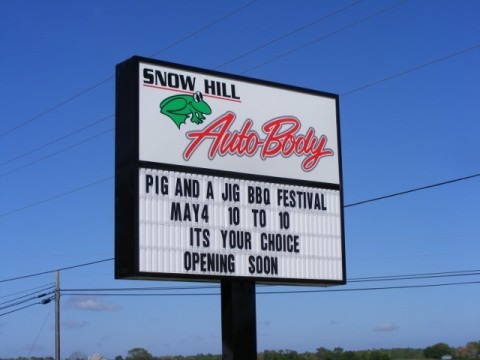 At least these guys went out and hired an expert, as Sandy Fulton (right) has been involved with Pork in the Park since the beginning. 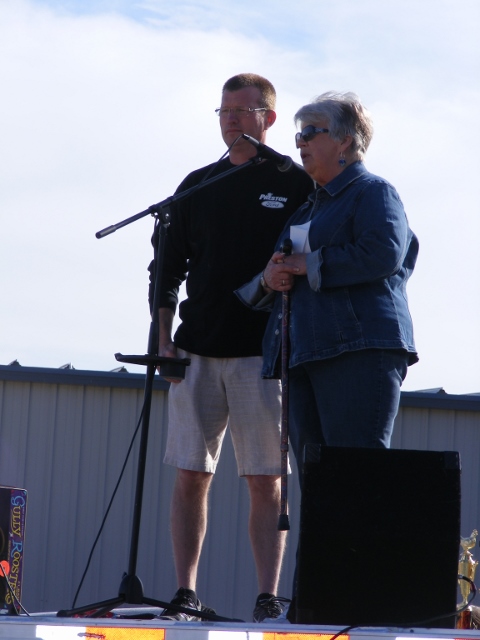 Certainly the Snow Hill Middle School PTA may have hit upon a winner of an event. For those of you expecting thousands of people, a throng of vendors, and dozens of competitors, though, you would be a little disappointed with this modest beginning. 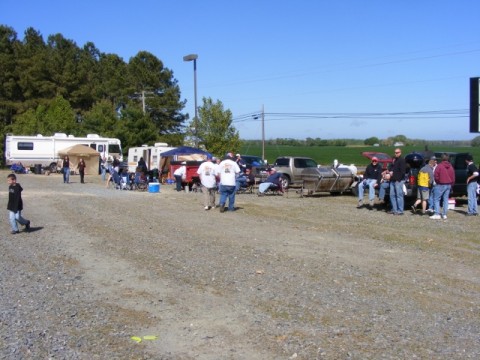 A total of eight amateur teams vied for the $100 top prize in chicken and pork, along with $200 for the overall winner. I’m not sure how the vendors did, but there were a few there. 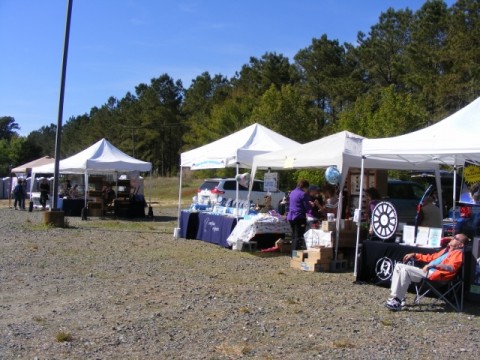 There was also a somewhat limited selection of food at this gathering, including ribs for sale from Famous Dave’s and Phat Boyz BBQ. Hey, it’s a start. 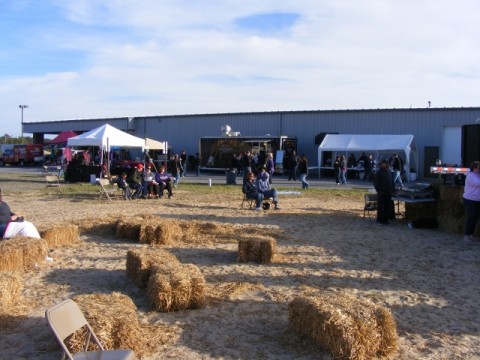 By the way, the best chicken prize was won by Broke Bob’s BBQ (obviously Bob is a little less broke) while Spicy Guys BBQ (who sent their lone girl up to claim the prize) won the best pork. But the overall champion was Tribal Smokers, which finished second in both categories.

Lest you think there wasn’t much going on there, well, there was a variety of activities. We missed the cornhole tournament, but could have sharpened our horseshoe skills. 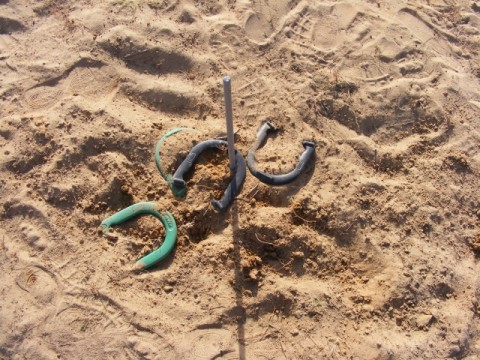 Now a number of people left after the awards, since they had likely arrived very early to the site for their chance at the cash. But quite a few hung around in the chill to listen to one of the five bands featured. (Spoiler alert: there is also the return of Weekend of Local Rock for a post next weekend.)

This couple made themselves at home in the hay, much to the delight of onlookers. 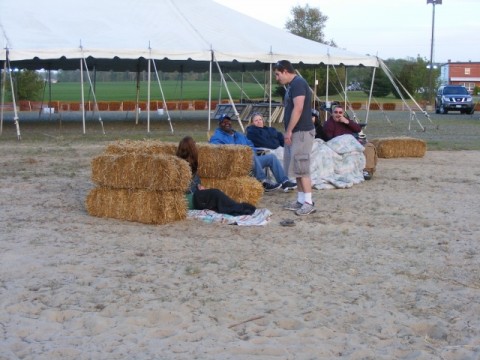 Others in the even younger set found the bales fun to horse around in. 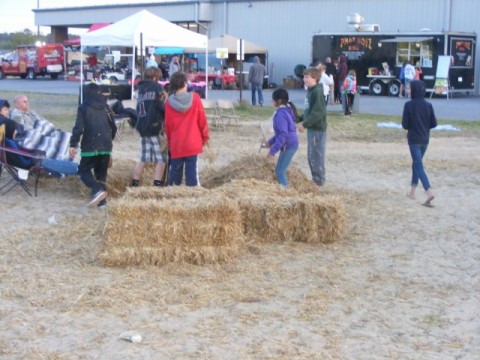 I imagine the young teenage boy, unseen under the lump of straw on the right side of the photo, is still scrubbing it out of his clothes, hair, etc. He had a lot of fun with it.

Another entertainer not on the bill was this talented young man. 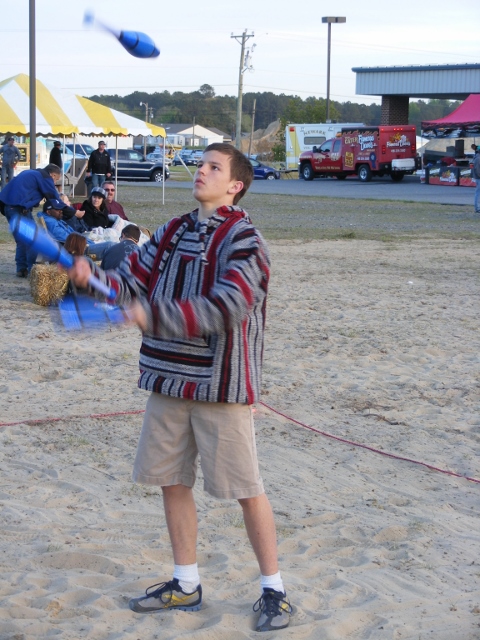 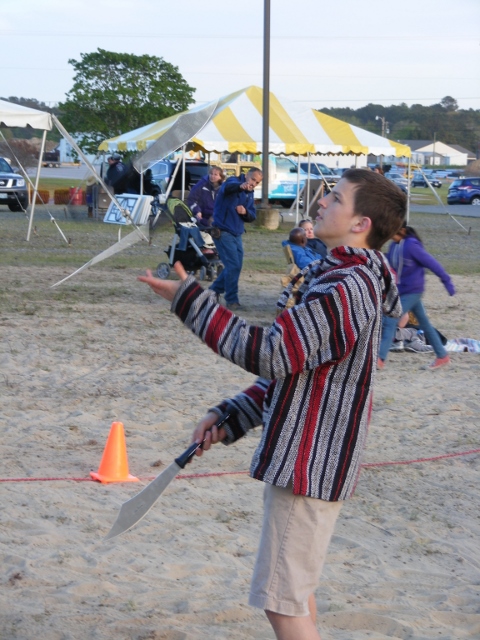 I suggested he should try his luck on the Boardwalk because he could probably pay for a semester or two every summer, with a little more practice.

But as the sun set over the horizon, the vendors had packed up and the food court was doing the same. I think Phat Boyz was the only one left selling as we left. Well, that and the beer tent. 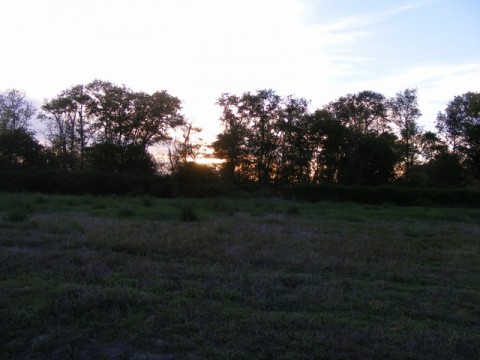 Yet aside from the food, which was a little on the pricey side – not that it’s an uncommon thing at these types of events – this was a relatively cheap way to spend the afternoon. With a little better weather and a year’s experience under their belt, I see no reason why they can’t draw a couple thousand next year.

Their main goal is to become a KCBS-sanctioned event next year, which will certainly make the stakes a lot higher for the teams. If they can get to a point where they’re drawing 30 or 40 teams, perhaps 20 to 30 vendors, and maybe a dozen different restaurants (not all of them sell ribs) that would be a superb one-day event for the Snow Hill area to bookend their season (Blessing of the Combines is their prime tourism draw, and they also have the annual Worcester County Fair, both in August.)

So congratulations on a job well done to Pig and a Jig. I look forward to bigger and better things next year. And also, as I said above, look for the Weekend of Local Rock post on the event this coming weekend.