Since I tagged along with my fiance, who was working at the event, I decided to check out the festival which perhaps typifies best what our area is about: the 64th Delmarva Chicken Festival. 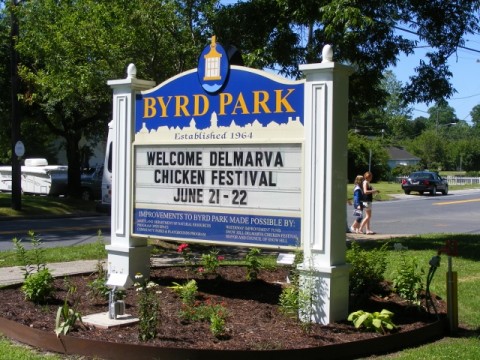 Held in Snow Hill, Maryland for just the second time, the festival featured several of its usual fan favorites, like this distinctive mainstay. 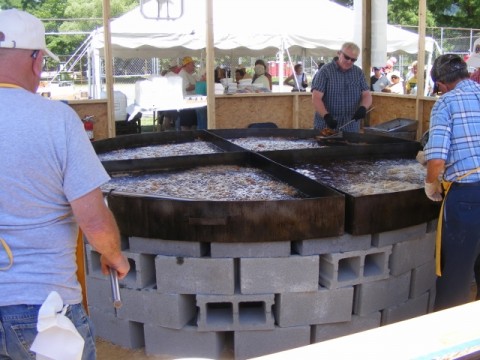 Billed as the world’s largest frying pan, this ten-foot behemoth is brought out each year to fry for another group of poultry-hungry diners.

Others who may prefer their birds chargrilled can get their wish too. 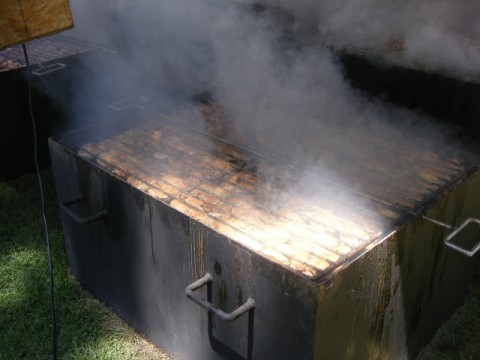 Hundreds of people were taking advantage at lunchtime yesterday when I was there. 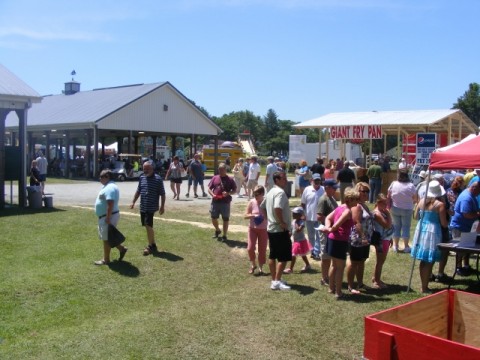 Also on that end of Byrd Park (a very appropriate place for a Chicken Festival, in my opinion) was the stage for a new favorite, the Mountaire Chickin Pickin’ competition. 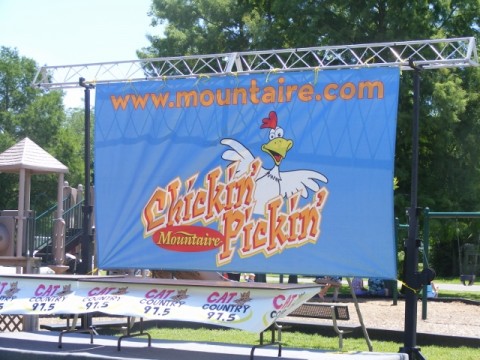 Having seen this competition last year, I can assure you it’s on the messy side. However, it is neater than the professional eating competition Kim and I saw in April.

And no celebration of poultry would be complete without the chance to see those who will be on your dinner table in a few weeks at various stages of life. The little fuzzballs in the bottom two pictures are child favorites. 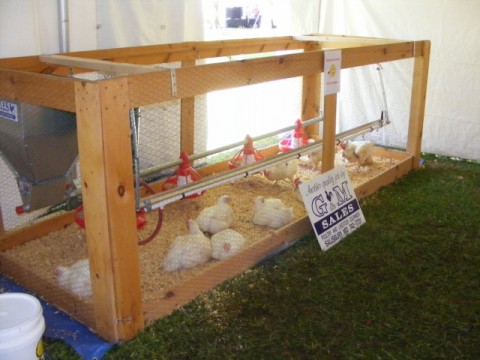 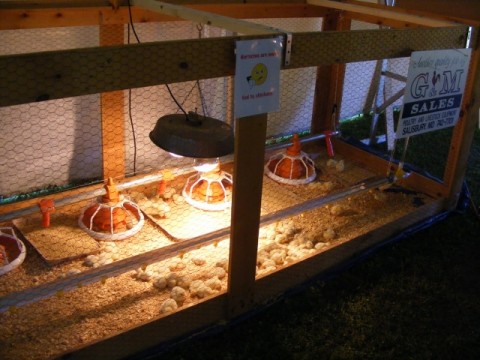 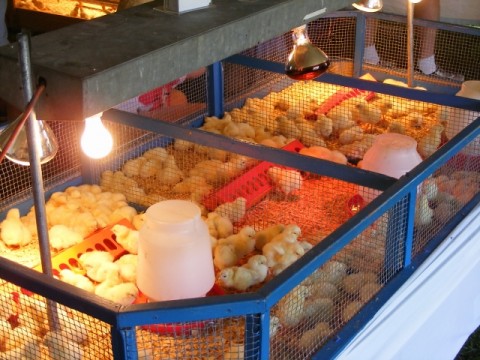 The kids also get their own games, called the Chicken Capers. I think the object of the contest in the bottom picture was to carry an egg on a spoon across an obstacle course. 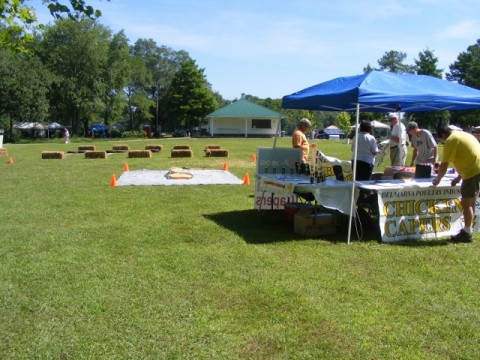 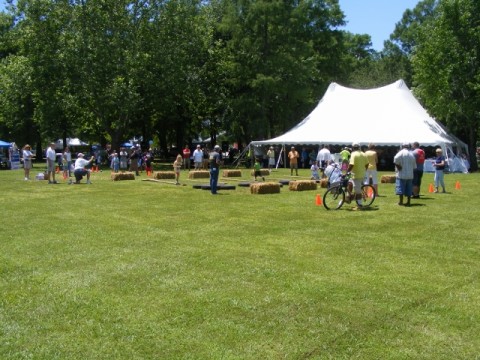 The kids were also featured as part of the entertainment this year. This is the Worcester County Children’s Theater performing as USO performers during World War II. The older gentlemen in the background doing musical accompaniment are known as the WW2nes, and the show featured its own child version of Bob Hope. 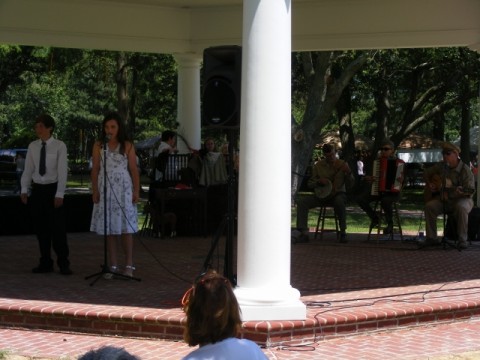 It was a nice little show for the several dozen who sat there and enjoyed it. This was part of a broadly appealing entertainment package. 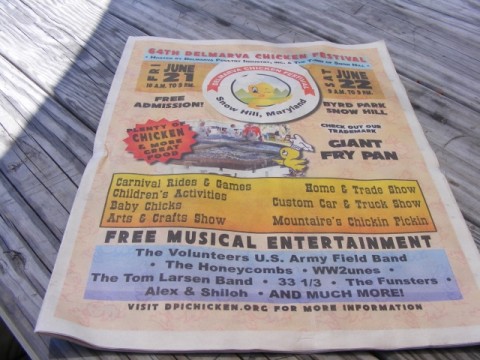 I have much more on one entertainer in particular for a future Weekend of Local Rock post.

One thing about this festival, as opposed to the ones I’ve attended in Salisbury, is that the entire town of Snow Hill seems to have backed the event quite well. Up and down Market Street were these eggs mounted on utility poles to denote sponsors. 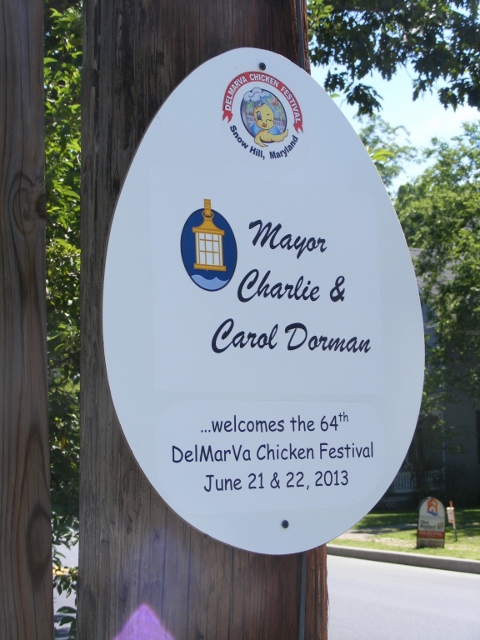 I saw this on my way downtown to see another facet of these gatherings – a large car show. These guys probably take the craft of restoring cars about as seriously as poultry farmers tend to their flocks. 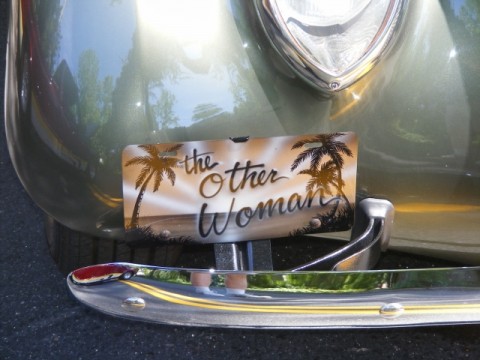 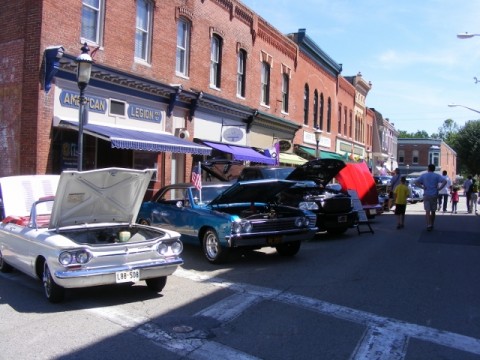 One of the first I saw down there was my instant favorite.

Let’s face it: in this area of the country, Mustangs and (particularly) Camaros are a dime a dozen. You might even see your share of Firebirds and, less occasionally, a Barracuda. But I think this is only the first or second AMC Javelin I’ve seen, and it reminded me of my hometown. 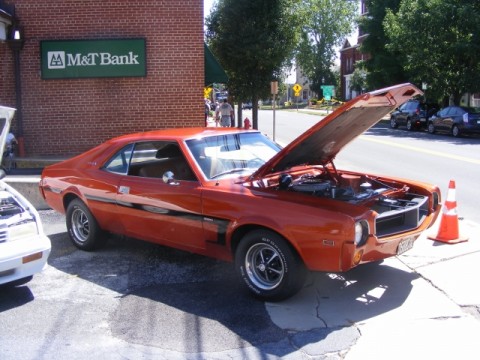 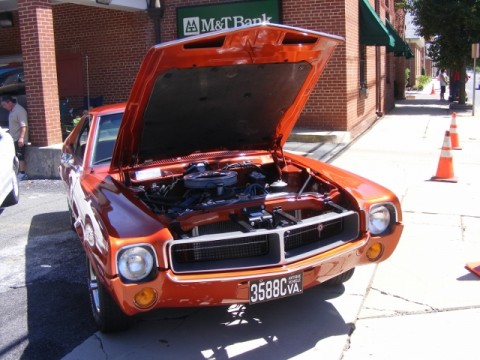 Being from a city which makes Jeeps, back in the days when Jeep was part of AMC the muscle car of choice for those workers was the Javelin – and why not when you get a hefty discount? So they are far more common there, but here? Let’s just say someone from Virginia made my day.

The Chicken Festival also gave other businesses a chance to get their name out. One has to ask, though, what NASA has to do with the poultry industry. They are a large local employer thanks to Wallops Island, but still this was a little strange. (Then again, one could argue the health care provider my fiance works for is not poultry related, either. But NASA is a little out there.) 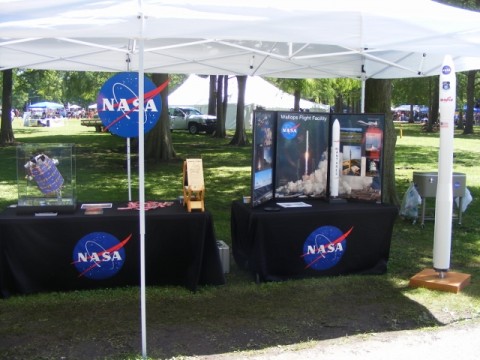 Snow Hill can use every job it can get, though. Coming back from the car show downtown I noticed a set of eyesores lined one part of the street by the park. 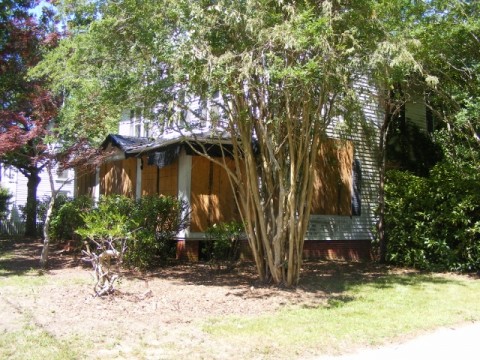 This was one of three adjacent houses in a similar state of disrepair – but it could be an opportunity for an investor with an eye for value and a cooperative local government who sees the potential of these parcels based on the location. 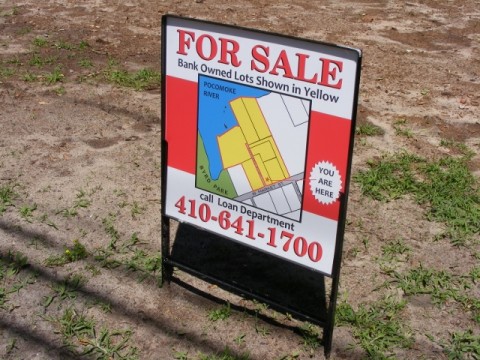 Looks to me like a replat would leave enough space for a half-dozen condos spaced around the alleyway. Then again, perhaps the reason this hasn’t been done are the onerous environmental laws in this state. Anyone who comes up with laws regarding fertilizer usage just may be a little too far to the side of Radical Green. 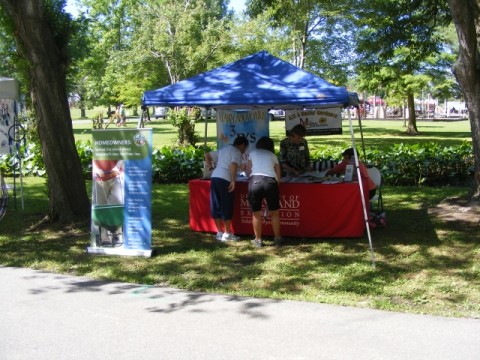 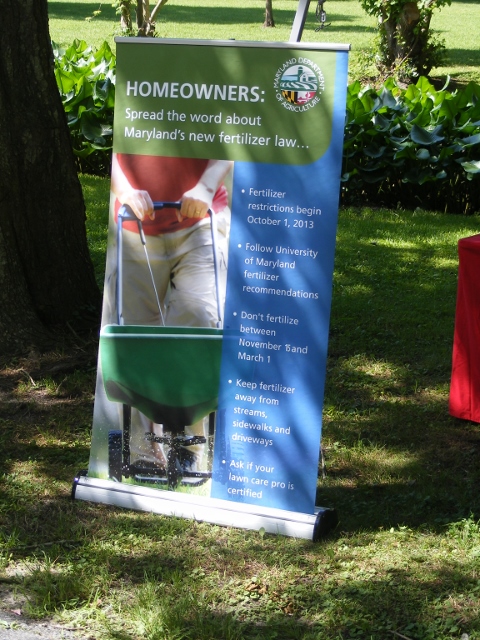 Yet I would agree with the contention that farmers are the true environmentalists. From new fuel-efficient equipment… 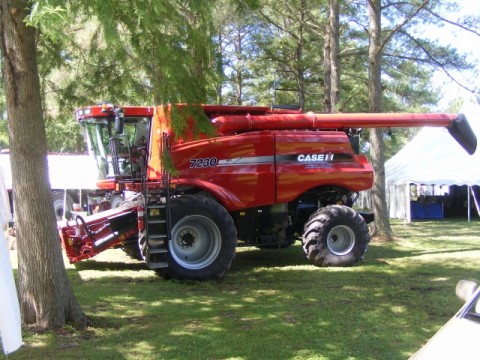 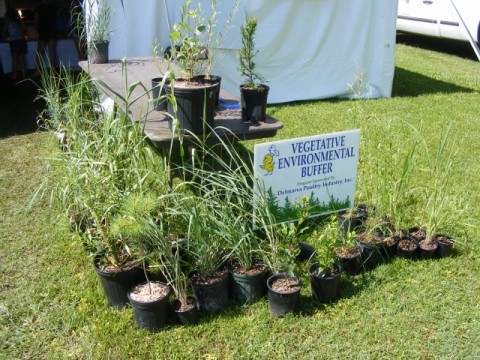 …to new approaches to dealing with age-old problems, farmers are in step with true environmentalism as opposed to power grabs in the name of “sustainable” development. 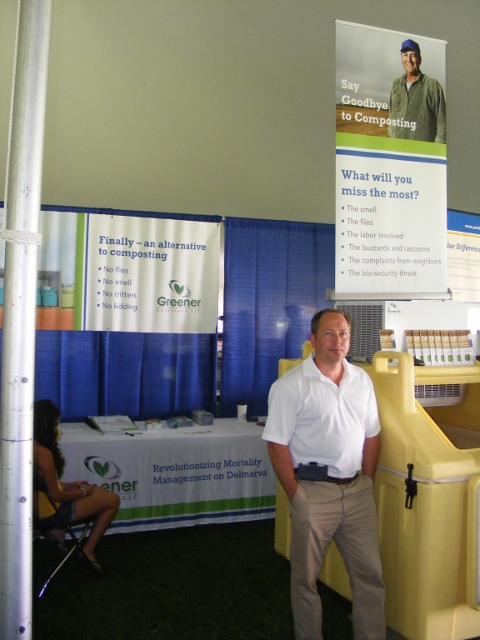 This last product is one example. I never thought about bird mortality, but not every chick makes it to adulthood. Those who don’t survive have to be taken care of somehow, and composting wasn’t doing the job – instead, the decaying flesh attracted flies and rodents. What sits next to this gentleman is a freezer especially for these birds, to be kept until the surviving birds are sent to market. Then the company disposes of the product and cleans the freezer. Yes, this “mortality management” system has a high four-figure startup cost, but is billed as a labor saver.

Someone came up with this product idea, and I doubt it was the government.

So as the boats cruised down an idyllic Pocomoke River, the 64th Delmarva Chicken Festival approached its close yesterday evening. 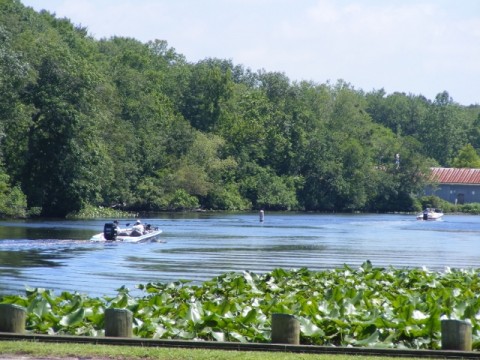 I close with this photo just because I liked it. You don’t get this shot at the Centre of Salisbury – but you could at the upcoming Worcester County Fair held in the same park August 9-11, or any other time the park is open. 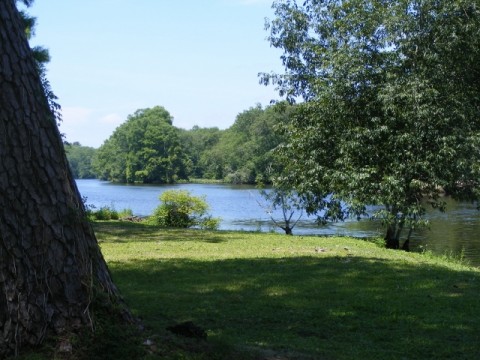 Since the last three Delmarva Chicken Festivals have been in Millsboro, Delaware, Salisbury, and now Snow Hill, I suspect the next one will be somewhere on the mid-Shore. Regardless of its actual location, those who support the local poultry industry will do their best to make it a success.

One thought on “2013 Delmarva Chicken Festival in pictures and text”