In part 1 yesterday, I detailed how the city of Fruitland came to acquire its video speed recording equipment through changes in state law and the ordinance enacted to allow the city to secure a contract with the equipment vendors.

Here is what they received: 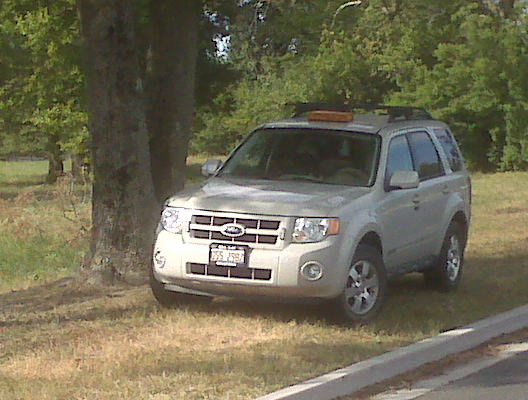 In the second picture, the required warning sign is shown along with the Escape’s location that day. Hang on because that’s important. 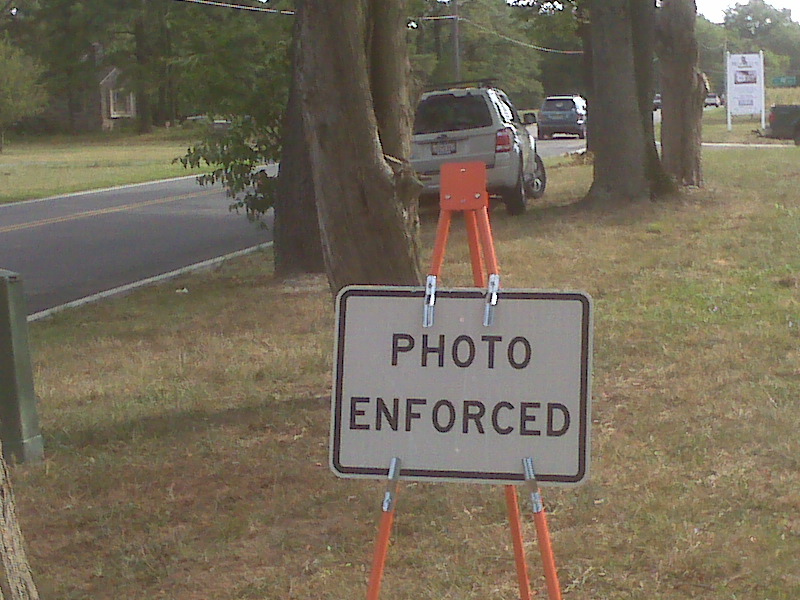 According to the Maryland State Highway Administration’s “School Zone Automated Speed Enforcement Information” pamphlet, a school zone is designated by the SHA as follows:

SHA defines a “School Zone” as a segment of highway located within a School Area that is:

I emphasized “and” because that’s the important factor.

Yesterday I did a little bit of field investigation regarding the two schools in Fruitland, Fruitland Intermediate on West Main Street and Fruitland Primary on North Division Street. The posted school zones are as follows:

Fruitland Intermediate: along West Main Street from a point just west of the intersection with Business U.S. Route 13 to the corner of Moore Street.

Fruitland Primary: along North Division Street from a crosswalk just north of Anderson Street to the corner of Elizabeth Street.

In both cases, there are signs which denote the speed limits as “photo enforced.”

However, the location of this speed camera was well outside the posted school zone!

I’m sure Fruitland may argue that this stretch of road falls within the 1/2 mile radius allowed for school zone enforcement, and being that Fruitland Primary is just down the street they would be correct. However, the SHA guide notes:

School zones should not be established solely for the purpose of installing speed cameras. Similarly, all school zones do not automatically qualify for speed cameras. Speed camera deployments should be based on a traffic safety study. (Emphasis in original.)

My photo source informed me that, not only were the pictures taken outside the school zone but during a period when the kids are out of school! There’s no question that school safety was less of a factor in this case than fund generation.

The only “out” is whether this was an active work zone for construction at the time, since the ordinance as written was for a “speed monitoring system in each school zone and work zone.” Perhaps a test case is in order, depending on where one of the nearly 100 scofflaws was photographed and at what time. The local law clearly states that these cameras are only for school zones and work zones and the road appears to be fully open, without any orange construction barrels or other signage associated with a construction zone.

But this also points out the importance of monitoring local government. A group like Americans for Prosperity would normally be all over this item, but it slipped through the cracks. Certainly I made the case to Wicomico County officials that I was dead-set against the speed camera idea after SB277 passed last year, but the city of Fruitland obviously didn’t get a similar message.

There is one other remedy, though, and that is through the ballot box. Last week the city of Fruitland began soliciting candidates for its municipal elections this October. As it so happens, three of those who voted in favor of adopting speed cameras will be on the ballot, and it certainly gives pro-freedom candidates a chance to win office.

The filing deadline is September 6th, so if you don’t appreciate the City Council pulling one over on the motorists in Fruitland in the effort to squeeze a little extra revenue out of them, here is your opportunity to make a change. The election occurs October 4, 2010.

3 thoughts on “The video speed trap: an investigation (part 2)”