This is the fifth part of a series taking a deeper dive into various important topics in the 2020 Delaware gubernatorial election. On the 100-point scale I am using to grade candidates, Second Amendment issues are worth 11 points.

This section of the dossier has been revised and updated to reflect the general election field.

These will be presented in the order of Republican, Libertarian, Independent Party of Delaware (IPoD), and Democrat, who in all cases are incumbents.

It was an event I thought about making a post out of, but in this era of the CCP virus (h/t The Epoch Times for that moniker) I thought depicting a mostly maskless event wouldn’t go over well. Regardless, back in August I was at a local gun club for its family day. And one thing I quickly learned was that it was a place with hot and cold running politicians – no surprise with a primary coming up.

While there were a few local politicians of note – oddly enough, I realized who some were by the legislative plate on their cars – it turned out via happy accident I was due for this part of the dossier. (My wife told me about this event that Saturday morning so we squeezed in a little free shooting before heading up to see her family.) So for the purposes of this section of the dossier I’m adding bonus content.

My disclaimer: I wasn’t there for the entire event so some of these candidates may have circulated there prior to our arrival – for example, I saw U.S. Senate candidate Jim DeMartino (who lost in the primary to Lauren Witzke) working his way out as we were walking in.

Of all the Republican gubernatorial candidates at this event, Julianne had the most formal setup and was engaging with voters, including me: 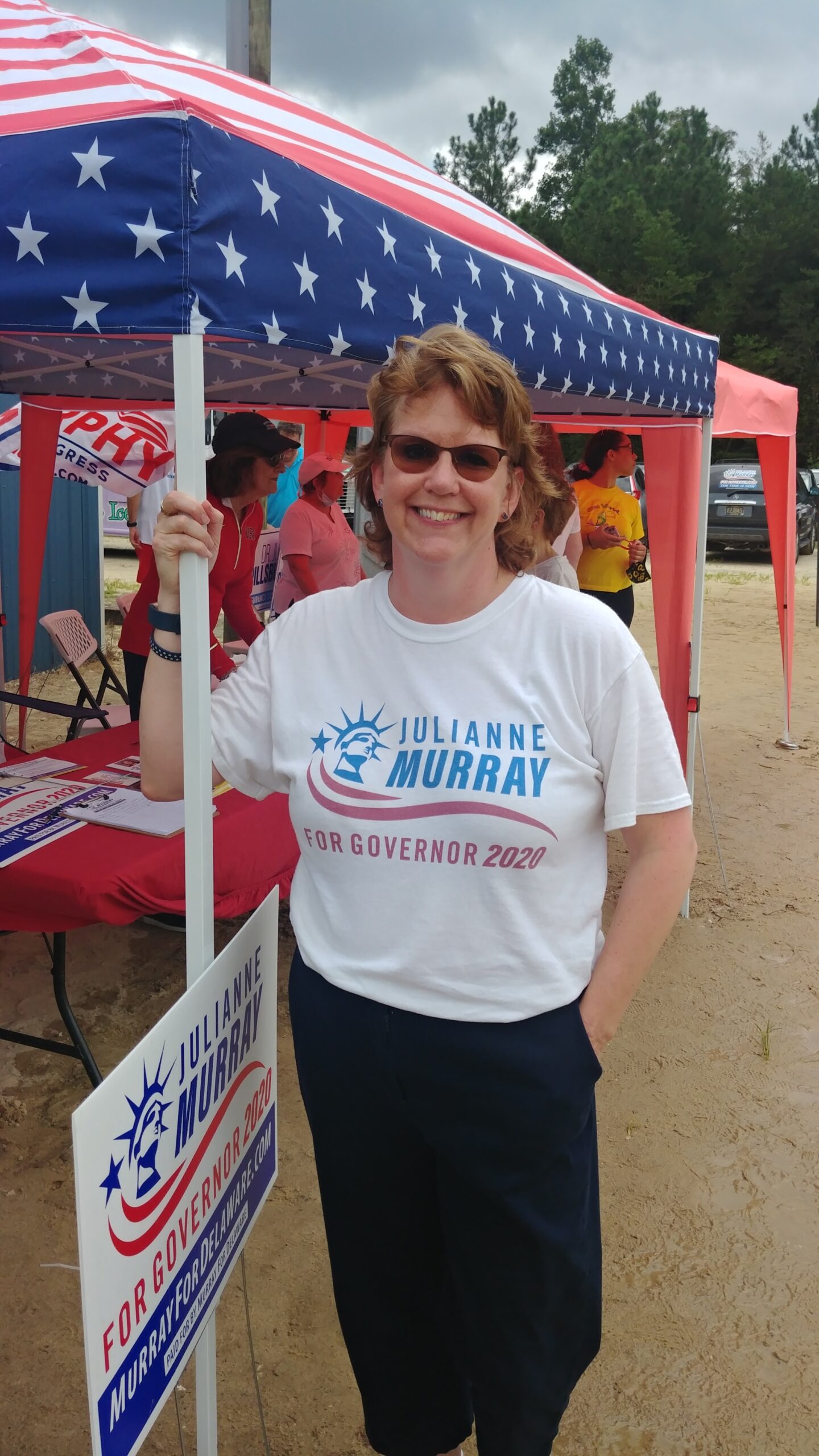 Yet our brief conversation didn’t touch on 2A issues – heck, I was impressed enough that she knew of this website.

The meat of what she states about the topic can be summarized this way: “Julie knows that limiting our Second Amendment rights does not translate into tough-on-crime measures. It doesn’t make anyone safer. It only punishes law-abiding citizens. Like you, Julie worries about the violence in our communities. She wants safe streets and safe gathering places for our friends and family. Julie will look beyond the rhetoric to find the real source of the problem and find solutions that do not infringe our rights. By addressing the true problem, we will be taking the politics out of the issue. Unfortunately, our Governor and the media like to perpetuate misinformation and dangerous rhetoric in order to push an unconstitutional agenda that threatens the rights of law abiding citizens. As Governor, Julie will defend the rights of our law abiding citizens, hold law breakers accountable and support our first responders.”

This is intriguing to me on two levels. I notice the way she states the proposition gives her a little bit of wiggle room, but, more importantly, there’s the phrase, “the real source of the problem.” I can’t fathom if she doesn’t agree with the adage “an armed society is a polite society” or if she really wants to begin a one-woman, one-state war on the cultural rot and lack of respect for life that may well be a root cause of gun violence. Moreover, if we don’t have a tyrannical, overreaching government, the need for Second Amendment protection on that front abates. That’s why I find this interesting. I have yet to listen to a three-hour (!) podcast with Murray so I hope to get more answers there. In the meantime, I split the difference and give her 5.5 points out of 11.

While he promises not to enact any new gun control measures, it’s somewhat telling that John is for “Constitutional” carry but not concealed carry. I don’t see him as a force to reverse the excesses of the current regime, so he gets just 3 points out of 11.

Unfortunately, she seems to be silent on this important subject. No points.

In 2016, John noted he would be “directly confronting” the issue of gun violence by working with other states, making sure schools have up-to-date safety plans, “confronting the issue of mental health and gun access,” and restricting the sale of so-called “military-style” weapons.

Barely a year later, Carney promised, “In the coming weeks, my team will work closely with lawmakers to craft legislation that would prohibit the sale of assault-style rifles in Delaware,” in order to “make our state safer.” (I guess he didn’t specify who he was making it safer for, but it turns out he was doing so for criminals.)

It’s this damage to Second Amendment rights that our next governor has to undo. 0 points out of 11. If I could give him negative points I would.

I don’t need to hustle to find more from the candidates on the next subject, which will be job creation.