Yeah, I’ve been down awhile. Working on a book (plus doing my weekly Patriot Post, plus a disinterest in everyday politics) will do that. But now that the book is through the rough draft stage 90-odd thousand words later I can get back to what sharpened my skills enough to write such a book, and perhaps be a better blog writer for it.

But the reason I wrote this post is to inform you of the road ahead, sort of a heads-up for the near and medium-term future. There’s also a completely unrelated segue at the end, which is why you may see the photo on the social media sharer.

I have two major political projects to do this spring and summer, and both have deadlines attached. The first one is to begin the research for the twelfth and final edition of the monoblogue Accountability Project for the Maryland General Assembly. This one will come with some additional information for whoever takes up that baton going forward, but the idea is to have it done prior to the June 26 primary.

The reason it will be the last edition is that I’m going to have less interest in Maryland politics in future years – my wife and I are looking to purchase some land north of the border and build our happy home. Instead, I will almost immediately begin after the Maryland primary on the Delaware edition so it can be completed by their September 6 primary date. (Their session ends June 30.) That will be the second of what will become its own ongoing process, with the advantages of only having to do it semi-annually (because Delaware carries items over between sessions) and only dealing with 62 legislators. I think I did my Delaware charts in one or two nights, rather than taking a week or so like I do with Maryland’s.

Once I complete that – and deal with the usual summer distractions such as Shorebird Player and Pitcher of the Month, the Tawes event in Crisfield, and so on and so forth – I have a longer ongoing project in mind.

Over the years I have used a couple different photography hosts. At first I used an Adobe website, but when they decided to migrate that to another site I lost all the links I had placed (not to mention some of the photos.) Then I went to a service called Photobucket, which was originally free but then began to charge $2.99 a month for hosting. Now they are supposedly changing the service again – but they have a plan for me at the low price of $9.99 a month.

Sorry, but when it costs more to house my photos than it does for my website host it’s time for a change. This is because in the meantime, maybe 2 or 3 years ago, I got a deal from midPhase (my server since the website’s inception) that gives me unlimited space. I used to have a limit, which is why I needed the outside service. Since that change it was only a matter of convenience because working with Photobucket was easier than working with previous iterations of WordPress. I have found, though, that the recent WordPress upgrades make working with photos noticeably better.

Anyway, if you go back to my archives from about 2008 to 2012, you’ll notice a lot of holes there where the photos are missing. Those are the dead links I need to replace, and it’s more than likely the same fate will occur with Photobucket since I began using them in 2013. Thus, on an ongoing basis (I’m hoping for two months’ worth of posts a week) I will upload the old photos to this server and repoint posts (as I have with a select few already because they are links in my book.) For that, it’s a matter of FINDING the photos, which I believe are on a external drive someplace in my house. If not, I am a saver and I have both my old computer and original laptop.

In a more immediate timeframe, though, I have a crapton of items I can use as odds and ends. One of them will be straight up and the other can deal almost strictly with energy, if I so choose.

So I may get back to the posting tempo I was envisioning when I stopped the everyday rat race. Ideally four or five posts a week will bring back some interest and maybe double my readership. Dare I dream of triple or quadruple, which used to be a bad week? Ah, the good old days when people paid attention to blogs and weren’t nose-deep in social media. 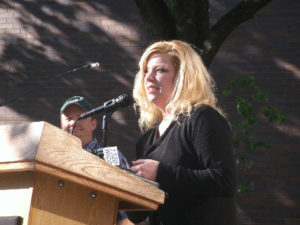 Speaking of that latter subject, you know you’re in an information silo when you go to social media and the same photo of a certain political candidate I know well as an erstwhile colleague keeps showing up. It’s unfortunate I can’t find a certain photo of my own, although this one that is traced to Lower Eastern Shore News may be pretty similar because I’m guessing it’s from the July 4, 2009 TEA Party in downtown Salisbury. (This is one set of photos that may be on the old laptop.)

Now I have known Julie Brewington for about a decade, since she and I met when the TEA Party got started. For two-plus years (2014-16) we were colleagues on the Wicomico County Republican Central Committee, and to say she has a roller coaster of a relationship with her fellows is an understatement.

Over the years Julie and I have had the occasional lengthy social media conversation regarding local political issues. There are a lot of things she’s been accused of over the years, but I don’t think she’s a bad person. I think she’s a good person who needs help with her current difficulties and our prayers for strength, wisdom, a thick skin, and a penitential personality.

Given the charges against her, it’s fortunate she only wrecked the car she was in and, to an extent, her reputation – although there are a number of people who already believe she’s done that before all this happened. But let us pray she seeks and receives the help that she needs. We will have to be without her passion for a time, but I think she’ll be better in the end.