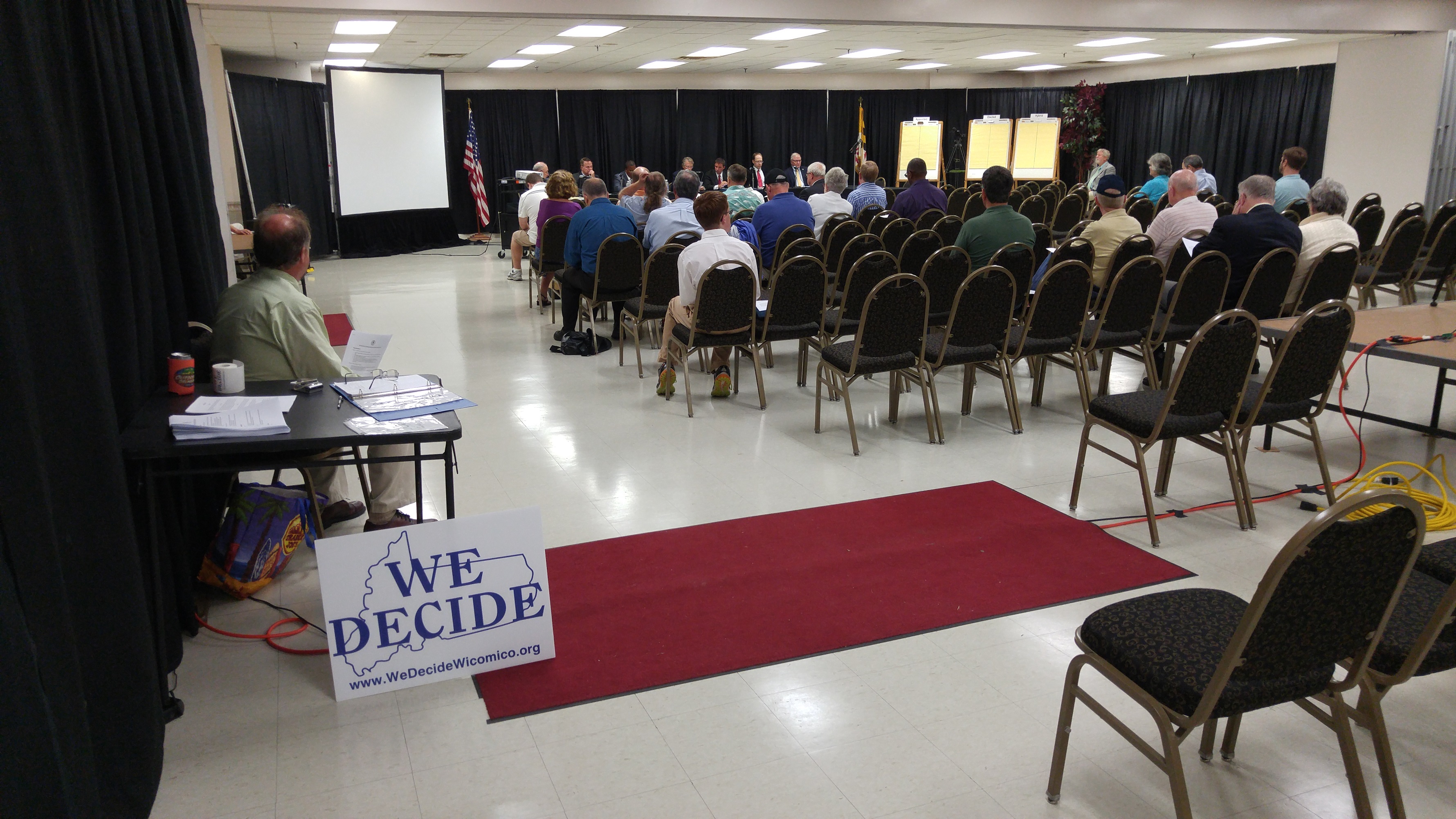 Last Thursday about 40 people gathered at the Wicomico Youth and Civic Center to speak out on the prospects of an elected school board for Wicomico County. When I saw the full parking lot I thought I would never get a seat; alas, most of them were here for a kids consignment sale going on simultaneously at the venue. I took the photo as I walked in and the crowd only increased a little bit.

But the County Council presented a number of options available, broken down into three categories: fully elected, a hybrid of elected and appointed members, or the status quo of a fully-appointed board.

Further subdivision of the elected option provided for either a five-member elected board based strictly on County Council districts or a seven-member elected board with five district plus two at-large to mimic our County Council. Meanwhile, the hybrid option would have five members elected from the County Council districts with the other two appointed by either the governor, the County Executive, or a nominating commission. That nominating commission could direct the governor on which members are acceptable in an all-appointed option or we could stay with the current system of appointment.

Out of 22 who spoke, 14 preferred an all-elected option. Woody Willing addressed the diversity concern, stating “there’s no better way to have diversity than electing seven people.” Ann Suthowski, who was “in favor of a 100 percent elected school board,” pointed out that four of the seven members work or worked in education, three lived within a mile of each other while the eastern and western ends of the county were not represented, and as far as she could ascertain only one member was under 60 years of age with kids in school.

Turning to Senator Jim Mathias, at whose behest the hearings were scheduled, Suthowski concluded that elected school boards were good enough for the other two counties he represented, so why not Wicomico?

Others who backed the elected board saw it as a way to promote fiscal accountability. Kay Gibson bemoaned her lack of choice in the matter when half her property tax dollars went to education – as she put it, being “taxed without representation.”

Transparency and parental involvement were also common themes. Dr. Mark Edney called an elected school board the “most transparent, democratic approach,” as opposed to the “secretive, crony-driven process” we had in place. Dave Parker stayed on that theme, revealing that a previous Appointments Secretary told him, “we don’t much care who (the Central Committee) interviews.”

“I like this governor,” added Parker, “but I don’t want him selecting my school board.”

Involvement was key to Donnie Scholl, who thought an elected board would “maximize parental involvement.”

But the handful who preferred the hybrid or appointed boards had their reasons. Kelsey Maddox said “if I had to choose, I would say hybrid.” She rejected the notion that the 90 or more percent of counties with elected boards had the best system simply by virtue of the sheer numbers.

Current WCBOE president Don Fitzgerald was in the “if it ain’t broke, don’t fix it” camp. He also bellowed that the current school board has “worked hard in this community” and that he was no crony.

Most of the elected board naysayers, though, circled their wagons around the diversity concept. Gary Hammer, who heads the local teachers’ union, said his body was not against an elected board but previous proposals “did not account for diversity.” He believed there should be more than a yes-or-no choice between elected and appointed. Another former board member, Jon Sherwell, added that “effectively, an appointed board can be diverse.” He also questioned some of the assumptions made by the We Decide Wicomico group and others, arguing that he was appointed despite being unaffiliated.

Local NAACP head Mary Ashanti added that the appointed board has “given us an opportunity” and remarked “the issue for me is how it will be written in the referendum.” But whether it will get that far may be up to Delegate Sheree Sample-Hughes, who warned that the Ways and Means Committee in the House was interested in preserving diversity and having public input. (No one in our local delegation sits on that committee, which heard last year’s bill.)

As it turned out, about half of those present spoke, although Sample-Hughes was the only legislator to testify. No one on County Council chose to add remarks, nor did Senator Mathias or Delegates Carl Anderton and Mary Beth Carozza, who also listened in.

The next hearing will be at the Delmar Elementary School on Foskey Lane next Tuesday, September 22. I won’t be there so sometime in the next few days I will have a message for that hearing. When it comes out, feel free to share.

2 thoughts on “Elected school board hearing: take one”