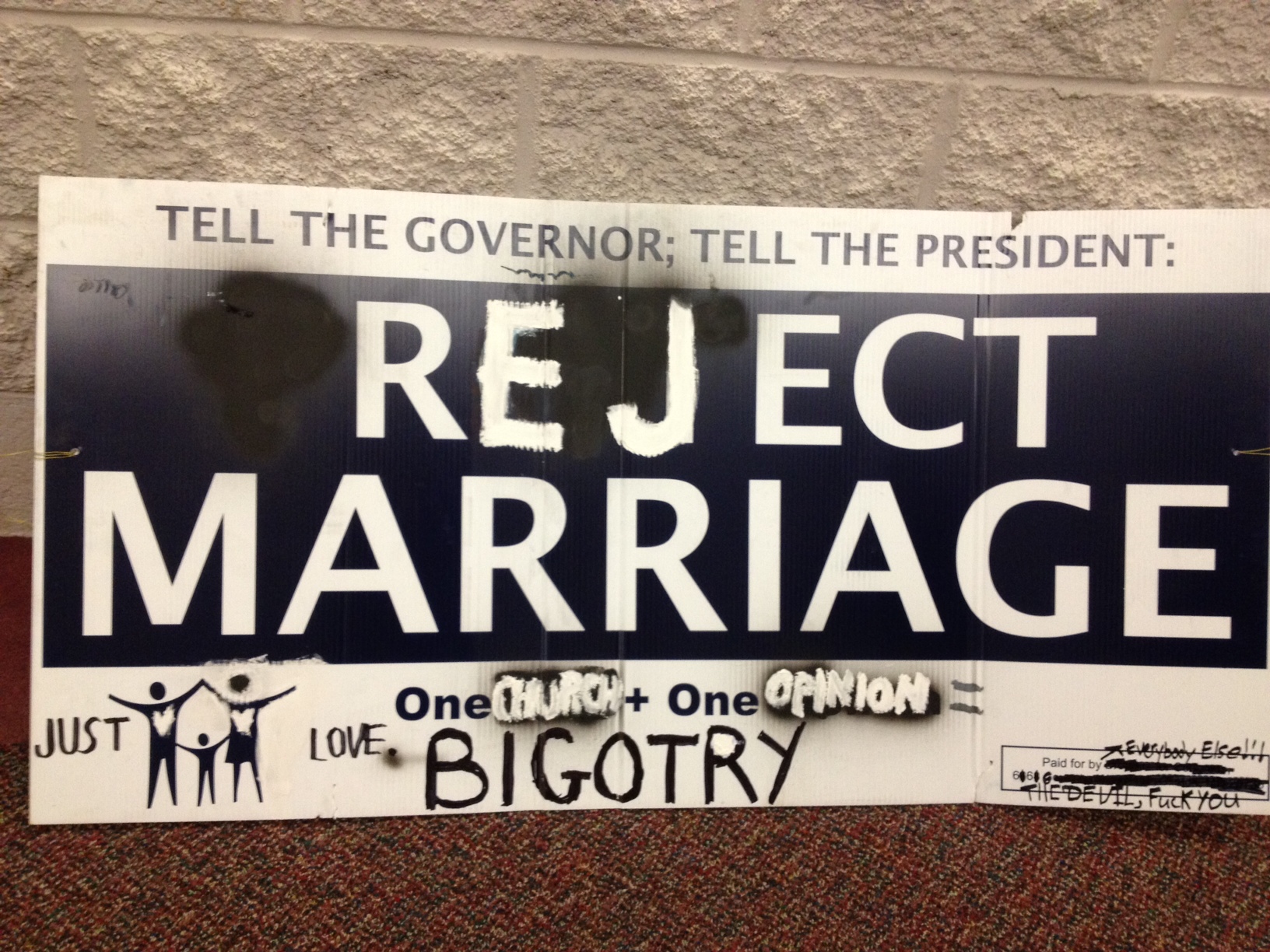 If you thought the debate over same-sex marriage was going to be genteel and conducted by adults, don’t say you weren’t warned of what was to come.

This was sent by Protect Marriage Maryland as an example of some of the sign vandalism and theft which has occurred since churches and supporters of traditional marriage around the state began putting up signs urging people to “protect marriage” over the first few months of the year in response to the bill signed by Governor O’Malley legalizing same-sex marriage in 2013. Of course, PMM is among the groups seeking to place the issue on November’s ballot.

And with a number of events where people are expected to gather before the initial May 31 signature gathering deadline (including next weekend’s Pork in the Park celebration and the Salisbury Festival the following weekend) we could see efforts made at intimidating those who would seek or give their signatures to petition the bill to referendum. The template is already there based on some of the events surrounding last year’s petition drive to put in-state tuition for illegal aliens on the ballot, not to mention the controversy which swirled around California’s gay marriage referendum and its aftermath. The price of deviating from political correctness can be steep.

Yet I’ve often wondered why those who believe gay marriage must become the law of the state are so afraid. They trumpet polls which state their side is winning, and while it takes the signatures of  just 3 percent of those who voted in the last gubernatorial election to place a referendum on the ballot, it was nearly a 20 year hiatus since the last time Maryland had seen a successful push for allowing voters to decide. If they are so right there shouldn’t be a need to deface signs and perhaps intimidate petition signature gatherers and contributors to the pro-marriage effort, should there?

I happen to believe in traditional marriage and I’ve already signed the petition to place the issue on the ballot. Hopefully somewhere around 150,000 to 200,000 Marylanders will do the same, and while they’re at it place our gerrymandered Congressional districts to referendum as well. (Somehow I don’t think anyone will be putting out signs exhorting us to save the Congressional districts, though.) Perhaps I will take a little flak for doing so, but I happen to believe that changing the definition of marriage to include same-sex couples will eventually lead to it including adult-child weddings and unions between multiple partners of one or both genders. Once one threshold is crossed, those who will take a mile when given an inch won’t be satisfied with the one notch in the bedpost they’ve achieved.

And spare me the equation of the relatively recent legalization of interracial marriage and same-sex marriage. Once civil rights advocates got their desire to eliminate racial barriers to marital bliss, they were completely satisfied. Yet getting all the legal benefits and protections of marriage through the adoption of civil unions isn’t good enough for the radical queer movement – it has to be considered the equal of marriage between one man and one woman, or nothing.

Finally, it’s worth reading this gay man’s theory that being gay is more of a fad than anything, done for shock value. If what he’s saying is true – and admittedly this is very anecdotal, single-source evidence – then perhaps we should rethink the idea of changing a century or more of law (not to mention many generations of custom) for the flavor of the day.

Remember, the maturity level of some gay marriage proponents is measured by the behavior they exhibit. Is defacing a sign an indicator that the merits of same-sex nuptials can be rationally argued? I don’t think so.

8 thoughts on “Tolerance: the Left doesn’t practice what it preaches”