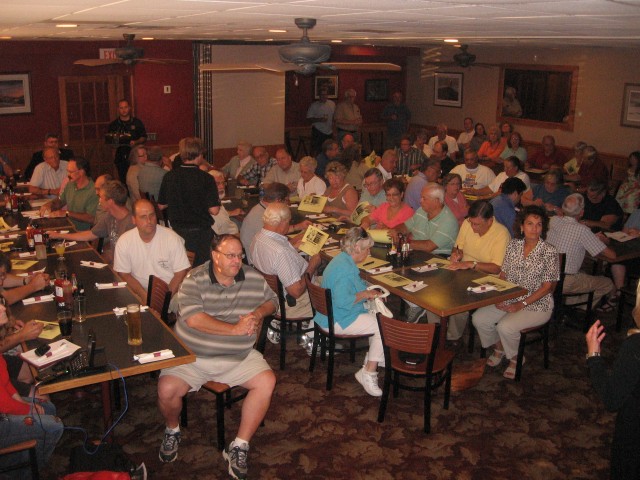 The current incarnation of Americans for Prosperity has a problem most groups would like to have – more people coming to their meetings than they have room for. It’s almost surprising that the fire marshal wasn’t called in once the people rolled into the crowded back room of Adam’s Ribs. Better still, about 1/4 to 1/3 of the people were new to the group.

Nick Loffer, representing the state AFP organization, began the proceedings by providing a quick update on health care, saying “it could die.” As he handed out a petition for each attendee, Loffer told the group that the Congressional leaders need to “focus on patients, not politics.”

Julie Brewington, who is the co-leader of the local AFP group (her counterpart Joe Collins is under the weather and wasn’t there tonight), chimed in with a quick history of the local AFP chapter, where things have been happening at a “fast and furious” clip. From a start involving all four lower Shore counties, Somerset County is holding their first meeting as a separate group tomorrow and Worcester County is in the process of scheduling their own meetings as well. Only Dorchester County was a little behind the curve. AFP had a goal to “become a force in local counties” and we were already having a “big impact” at Frank Kratovil’s events.

After a copy of yesterday’s Daily Times editorial regarding nighttime County Council meetings was passed out, Julie pointed out a number of other hot-button local issues AFP was keeping an eye on as well, including the prospect of speed cameras as a revenue generator and dropping Wicomico County’s revenue cap. The fiscal and accountability issues have drawn the attention of the local paper and District 5 County Councilman Joe Holloway, a supporter of evening County Council meetings who thanked the group for its interest on that topic. Brewington asserted that, “if we can’t get control of local government, we have no hope nationally.”

Getting back to more basic needs, Julie noted that the group still seeks a secretary and a committee for a chain to call members when quick action is required. They also wanted to hear comments from audience members, and several complied. It’s noteworthy as well that one couple are becoming quite the entrepreneurs by selling AFP T-shirts. Another mentioned his experience in Florida, where a local government tried to sneak through a $75 million bond issue but was foiled by public involvement – he told the group that “politicans learn the ropes at council meetings.”

The group is also getting together a bus for the 9-12 rally in Washington, D.C. – a prospect which interested many in the gathering.

Nick Loffer came back to speak on the state and national AFP situation and review tips for effective rallying.

As a state, Maryland’s AFP was “growing by leaps and bounds” (particularly on the lower Shore) and was a “force to be reckoned with.” Loffer opined that cap-and-trade was “almost a lost cause” based on who represents Maryland in the United States Senate but “we can kill” health care in the House. Nick related that “people are waking up”, citing a crowd of 400 for a Thursday night health care rally in Annapolis and 200 people already pre-registered for a health care forum in Timonium similar to one I live-blogged a few weeks back. Loffer vowed “we will play in the General Assembly” next year – opponents are already trying to discredit the group and its key personnel.

Turning to his appointed task of speaking on rallying, Nick told the group its message in any demonstration needs to be “clean, tailored, (and) crisp” because opponents will be on the attack if the message isn’t focused. In distributing a guide to effective rallying and going over its key points, Nick stressed in particular the importance of staying on message, being tasteful and courteous, and not trying to shout down opponents (or elected officials). Passion is fine but don’t let emotion cloud the message you’re trying to get across.

A few audience members checked in with their own advice. Steve Lind, who spearheads a successful AFP letter-writing campaign, related his opinion that “politicians have to face an informed audience” while another member who was at the Kratovil meeting in Mardela Springs passed along the opinion of a Wall Street Journal reporter covering the event who said their behavior was “exemplary.” Another lady told the group she thought “angry was not bad” when attending events. Nick stressed that we should “never give a free pass to any politician.”

One comment I made was to remind the group that not only should we hold politicans accountable but we should also ask tough questions of those who seek elective office as well (like I did last night.)

After Nick wrapped up, the meeting broke up into a social period, although a couple people tried to get the attention of attendees with various comments.  It seems to be the weakness of dealing with such a large group.

Upcoming events AFP will be involved in include the next Wicomico County Council meeting the morning of September 1st, the Timonium health care forum that same night, the 9-12 rally in Washington, D.C., and the Defending the American Dream Summit on October 2nd in Washington. It promises to be a busy few weeks for the group, who didn’t schedule their next meeting yet – certainly I’ll be in the loop when the date is set.

4 thoughts on “A growing prosperity”