It may take me longer to compile the photos and captions than the actual length of time the event was actually held, but here goes. There will be 25 photos here but I’m saving a few I took for a post later this weekend.

Certainly the Crisfield event is known for drawing hot and cold running politicians. But 33 years ago there was another purpose for its beginning and it became known for great food, like some of these beauties:

And you can’t enjoy crabs without something to break them apart, nor is beer quite the same in a plastic cup. Those in the know also bring a small cardboard box cut to resemble a shallow pan to hold all the food (as for the crabs above) – forget plates because you won’t find any!

The other purpose for Tawes’ being was promotion of local businesses and tourism. Anytime you can get in the neighborhood of 5,000 people to the small waterfront town of Crisfield it’s a mini-boom for local businesses and a chance to advertise their wares, as the following several pictures aptly point out.

And judging by the size and spread I saw within this tent, the lobbying business isn’t hurting either.

Even the unions were represented. I wonder if they bargain this as a day off?

And of course the politicians were out in force. That’s what the Tawes event has become synonymous with and this year didn’t disappoint. But the event also draws other interesting people – where else can you see Miss Maryland USA?

The media also covers this event like the seagulls which inevitably are drawn to the free food. These guys are the local media but we also get coverage from Baltimore and Washington, D.C.

While 2009 is considered an “off” year, there were candidates already laying the groundwork to compete in a primary still 14 months off.

In my travels about the Somers Cove Marina grounds I didn’t cross paths with Governor O’Malley (although he was there – see my postscript), but I did catch two who are out to unseat him, Mike Pappas and Charles Lollar.

The other key statewide race comes for the U.S. Senate seat. Jim Rutledge, who as I noted a couple weeks ago had suspended his campaign, is now back in. (His re-entry is also noted on a comment to that post.) But he wasn’t in Crisfield, just his supporters who brought this literature:

Another U.S. Senate contender who drove down from Queen Anne’s County to push his campaign was Eric Wargotz.

As you work down the chain to more local races, it’s noteworthy that our federal representation couldn’t attend because of their business. So none of the trioka of Congressman Frank Kratovil, Senator Barbara Mikulski, or Senator Ben Cardin could make it. That left the field open to Wargotz above and District 1 Congressional hopeful Andy Harris, pictured below.

As is always the case, the local representatives of both parties had their base of operations. The Republicans from Somerset, Wicomico, and Worcester counties combined their efforts and had a large tent in the center of activity.

This little sign taped to the GOP tent was my favorite though.

As usual the Democrats tucked themselves away in a corner, which became crowded with their supporters.

One loyal Democrat relaxing because he’s fresh off an election and secure for four years was Salisbury Mayor Jim Ireton.

Some observers may argue he’s secure in his House of Delegates seat, but District 38B Delegate and former Ocean City mayor Jim Mathias still worked the Crisfield crowd – perhaps with sights on a higher office?

One who would like to bump Mathias (or fellow Democrat Norm Conway) out of a House of Delegates seat is 2006 candidate Michael James, who’s trying again in 2010.

Nor did the politics stop at the gate. My friends representing Americans for Prosperity set up shop just outside the event, catching many of those who came in with their message of limited government.

As I said at the top, I have more pictures from Tawes which cover a political battle that’s not going to be fought at the ballot box but instead pits two old Eastern Shore foes – those in favor of progress against the NIMBY crowd. That will come on Sunday.

If you were at Tawes I hope this relives your enjoyment. Even though I’m not one who likes crabs I still enjoy covering the event and look forward to it each summer. One refreshing change this year was the weather, which was cooler and less humid than usual – so bet on a lot of humidity and (definitely) hot air at Tawes 2010.

Postscript: Julie Brewington passed along this photo of her and Governor O’Malley. She was handing him a Patients First flyer, which hopefully he took to heart (although I doubt it.) 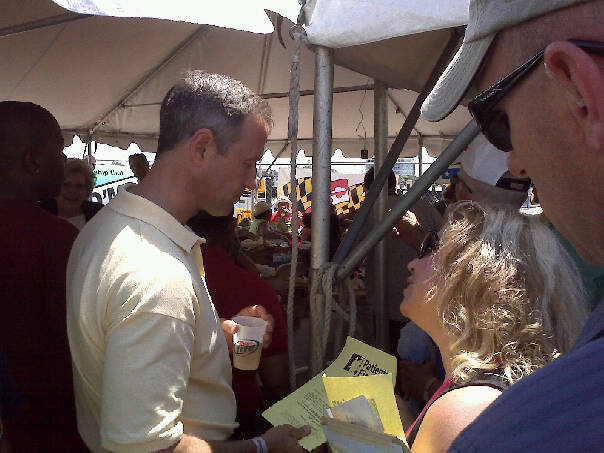 Look for him to be in full campaign mode next year.