While I did my main post on the Tawes Crab Bake Friday, an intriguing subplot I saved for today was the pitting of two major political players against one another. No, I’m not taking about the Republicans vs. the Democrats, I’m talking about utility vs. environmentalists.

In this case the controversy has arisen over the Mid-Atlantic Power Pathway – a proposed high-voltage electrical line which would eventually connect Virginia to Delaware, running under Chesapeake Bay and across the Eastern Shore of Maryland.

On one side, we have Delmarva Power, who rented a tent to tell its side of the story. 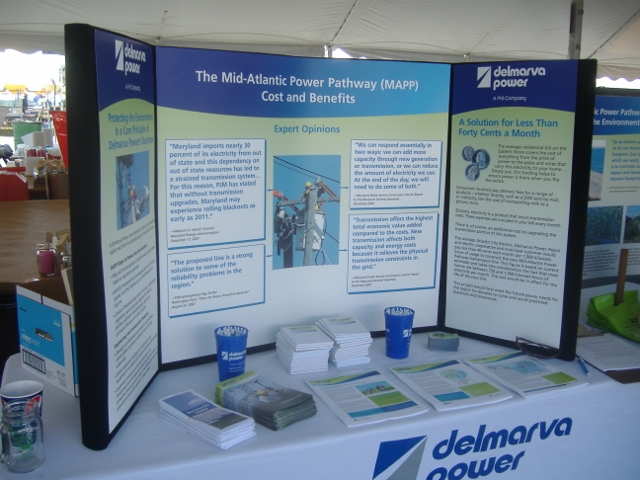 It’s become necessary for Delmarva Power to do so because of the heavy lobbying weight a group such as the Maryland League of Conservation Voters has. 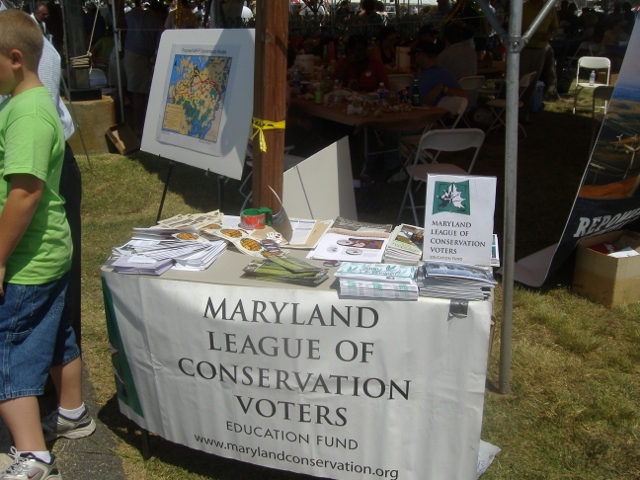 One of the many items available at the LCV table was a button stating “Muskrats Against MAPP”. I walked it over to the Delmarva Power booth where they commented something along the lines of being fine that a muskrat is against it, because muskrats don’t need air conditioning or Internet access. But we do.

Perhaps it’s a somewhat cavalier attitude, but here are the facts.

It’s been 25 years since the last major interstate transmission line was built in the mid-Atlantic region. Needless to say, demand has gone up significantly in that period and we’re approaching a point (perhaps as soon as 2011 according to an estimate by PJM, who operates the transmission grid in this region) where rolling blackouts could occur because of overdemand.

The Mid-Atlantic Power Pathway would supplement the lone high-voltage transmission line coming into our region. At the moment much of our electricity comes through Delaware and if something happened to that line we on the Eastern Shore (being at the end of the line) would be in a world of hurt. As it stands, the MAPP isn’t due to come online until 2014, leaving us in a possible hole for three years pending any delays.

The battle is coming down to allowing the high-voltage line to cross 27 miles of Dorchester County and 8 miles of Wicomico County here in Maryland. Some of it would run adjacent to existing lines or other rights-of-way but there are property owners who can decide MAPP’s fate and these heavyweights are putting vast amounts of money and effort into this fight to sway owners into allowing or denying MAPP access through their property.

Delmarva Power does come to this fight at a disadvantage. Naturally people aren’t generally pleased with the utility as electric rates continually increase and consumers eventually bear the brunt of the cost. Moreover, groups such as the League of Conservation Voters already have a slick public relations and marketing arm which works to “educate” people to their point of view. Here’s one case in point: 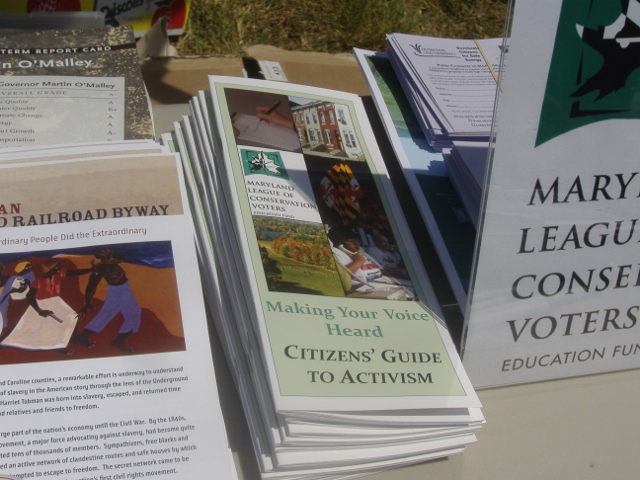 Other items at the LCV table I scooped up were their 2009 General Assembly Scorecard and a “Mid-Term Report Card” on Governor O’Malley. Glancing through them, it’s obvious their idea of proper legislation and my idea of good government are about 180 degrees out of phase. Those who achieved an LCV score of 100% are generally those on my “Reasons To Adopt Recall” list for the monoblogue Accountability Project. I guess the LCV cherishes freedom for wildlife more than freedom for themselves. 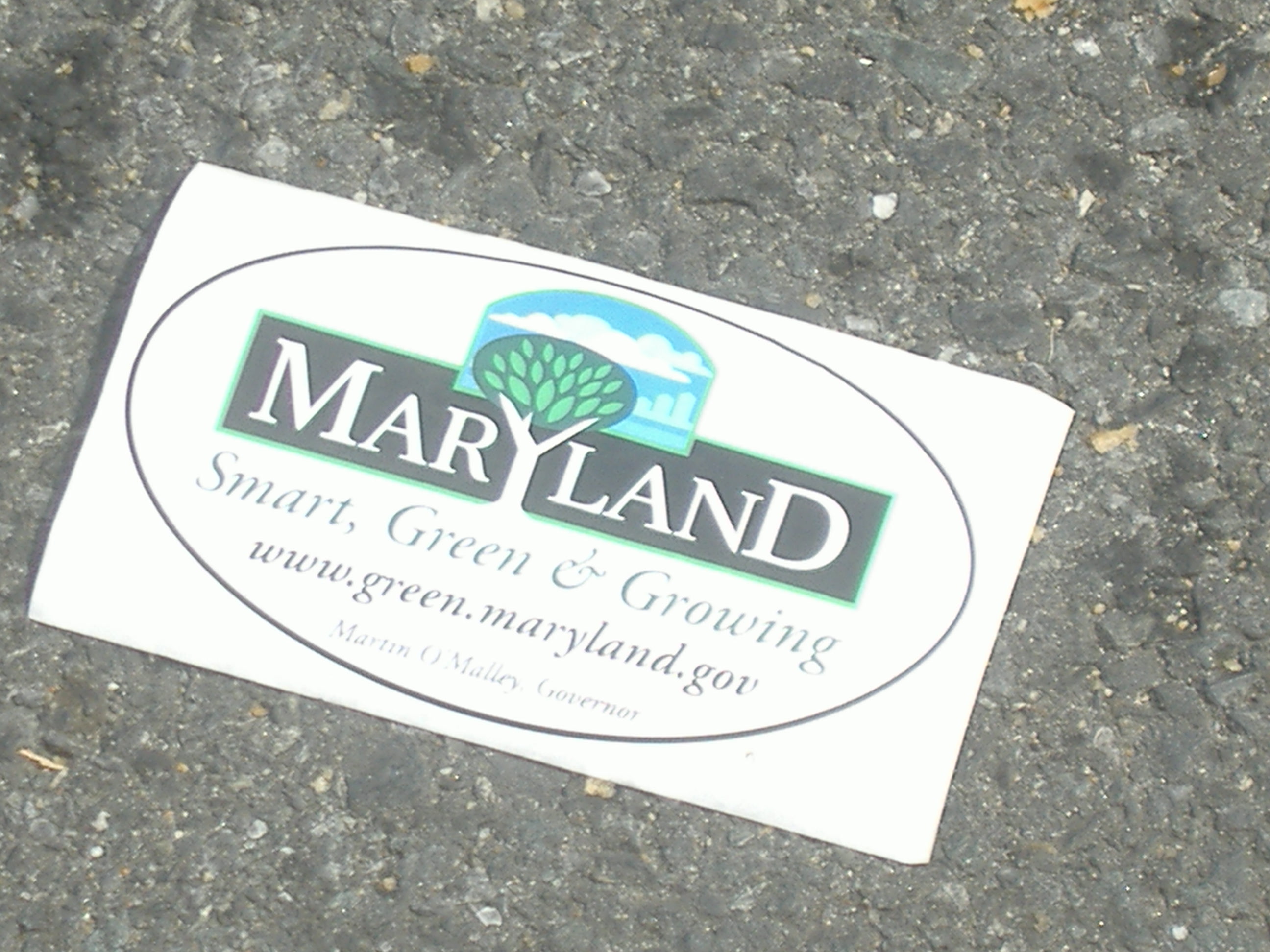 Adding insult to injury, there was also this sign at the LCV booth. 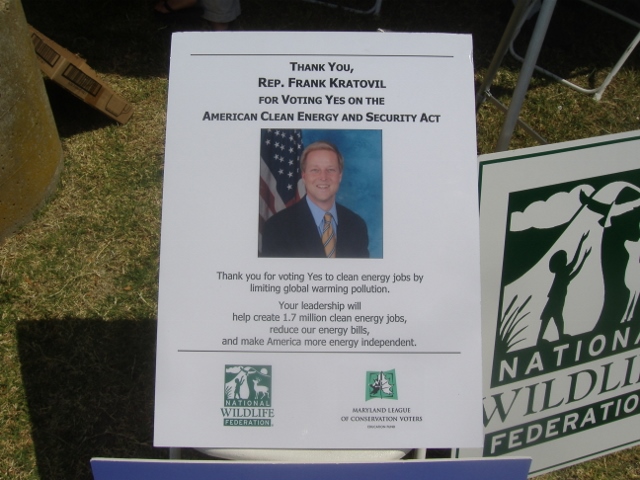 You can bet I’ll have more to say about this next week because I received a response from Frank Kratovil’s office regarding his vote for Waxman-Markey!

Needless to say, the Left tries to paint Republicans as the party of “no”. I happen to think they don’t say it enough in certain situations; regardless, here we have a situation where it’s the radical fringe environmentalists who are saying no to progress.

Bear in mind that even clean energy needs to be transported from place to place – a project like the proposed Bluewater Wind farm in the waters off Delaware won’t do much good out there since no one makes an extension cord that long. We have to move that electricity to where it’s needed, like my dining room where I write this.

One weakness Delmarva Power has is that they produce no electricity themselves. While I feel it would be to their advantage to do so, that’s not a decision which would be viable in the near future as building new plants takes time and acquiring existing ones may be too pricey. Given these limitations, MAPP seems like the best compromise solution for the money – money that would eventually come from our pockets anyway.

In a choice between the radical green ideal of bringing growth to a standstill and building infrastructure for progress, you can bet I’m all for progress.

4 thoughts on “NIMBY vs. MAPP”