Last night I posted the results of the Straw Poll; tonight I go into what was said.

Unfortunately I didn’t get quite the participation or attendance I expected; then again, this was a first-time event and we have competition from hundreds of other organizations – not to mention we’re not located in Iowa, New Hampshire, Nevada, or South Carolina. Maryland is the primary backwater state once again despite moving up to mid-February.

On a personal level, I am pleased that the event went off well despite the lower than expected crowd. It’s the first time I attempted putting together an event like this and insofar as anything we made last night from the purchase of ballots was “free” money, $300 (plus $100 in 50/50 money, plus signing up one new member) is nothing to sneeze at whatsoever. And I managed not to sound too stupid at the podium, either in handling the event as it went on or my presentation advocating Duncan Hunter for President. I actually thought I did that pretty well, four minutes off the cuff without notes or reading. Just wish I’d convinced another few voters.

We had four local speakers who exhorted the gathering to vote for their guy. As you’ve likely guessed, I was one on Duncan Hunter’s behalf. But I’d also like to thank BJ Corbin for his support of Mike Huckabee, Ryan Hohman for advocating Ron Paul, and Bonnie Luna coming up to press Fred Thompson’s candidacy. Obviously she was the big winner given the results. We also found out that Bonnie is Fred Thompson’s Wicomico County coordinator, so I guess she’s really the first to step up to assisting on a national campaign to that extent. Finally, from a message standpoint I thought each of us were well-received so that was a nice experience. I was getting a thumbs-up from Joe Arminio in the back on a couple points regarding Congressman Hunter (as did BJ with Mike Huckabee) so I made a little impact.

The four of us were a pretty good opening act for the remaining four speakers. 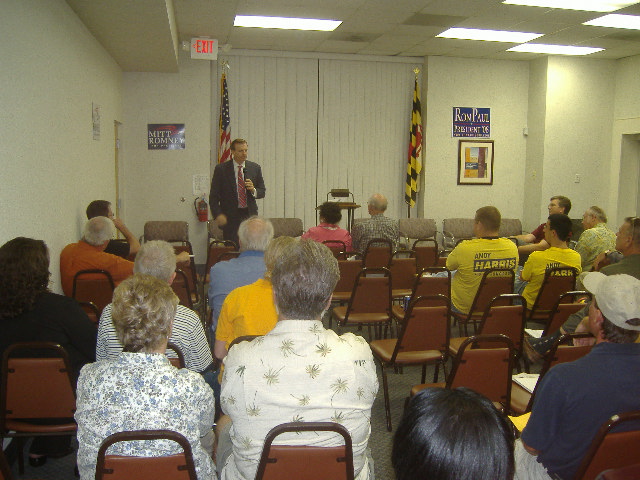 Joe Arminio drew first blood. The author, consultant, and newspaper publisher from Anne Arundel County began his ten minutes by referring to what he termed “colossal developments” in our economy, particularly the devaluation of the dollar against the euro. (He refers to it farther in this recent press release from his website. I received it but hadn’t had an opportunity to post it yet – so here you go.) Arminio even raised the specter of a possible depression since so many of our dollars are held overseas. Joe continued by stating that our country was “on fumes” in many economic respects.

His solutions lay in going back to an era before America hit its “apogee” as he put it; or to an era before 1972 when real wages peaked for the American worker. A return to something akin to the gold standard to discourage borrowing and increasing tariffs on imports to preserve our industry were just two parts of the cure, along with a sharp decrease in immigration. Arminio did not have kind things to say about the prospect of a North American Union, either. (I edited the above slightly based on Dr. Arminio’s comment below.)

Another idea I found intriguing in what Joe said was the idea of creating committees of voters to assist him and give feedback on how he’s doing. In a respect, Arminio wants to create democracy within the republic, although he didn’t go into many specifics on the idea. 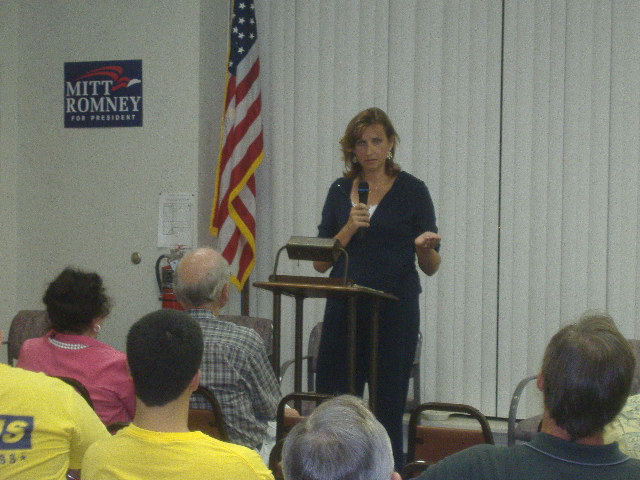 Cathy Bassett was a late fill-in for Congressman Gilchrest but did a good job in his stead. She termed Wayne as the “most electable” of the four, claiming that he gets a lot of crossover Democrat votes that the others might not get because the Democrats will “run hard” for the seat. She also alluded that out-of-district interests are out to “buy” (my term) a Congressman as opponents are taking PAC money that Wayne does not.

Saying that Congressman Gilchrest supports making the Bush tax cuts permanent, Bassett also made a jab at Gilchrest’s opponents by talking about earmarks in a positive light, couching it in terms of bringing home the bacon. Wayne would pursue “certain” earmarks, ostensibly those bound for the First District. One example she gave was the dualization of U.S. 113 in Worcester County.

If there’s one thing Cathy said that troubled me a bit, it was when she talked about corruption and bad behavior in Congress. She gave four names out, and while I did not write down the names, if my memory serves she cited Duke Cunningham, Tom DeLay, Mark Foley, and Larry Craig – it may not have been that specific four, but I’m positive all four she called by name were Republicans. I’m not saying the Congressional GOP is clean and pure as wind-driven snow, but what about William Jefferson or Alan Mollohan? 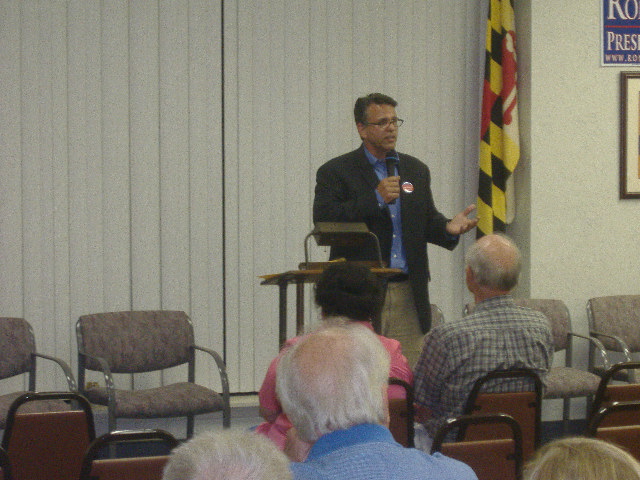 In my remarks about the recent WCRC Crab Feast, I said that John Leo Walter was “probably the most ‘average Joe’ in the race (but was) facing a pretty steep learning curve as far as running a race goes”. Well, Joe did two smart things for this Straw Poll. One, he brought a big family and other supporters down from Centreville and they must have had a few dollars for the paid ballot portion of the Straw Poll. Secondly, he quoted what I said on my website as part of his remarks. And yes, he began by talking about his family.

John didn’t really go into specifics as far as policies go, except to brand himself as “similar to Fred Thompson.” (Given the Straw Poll results, another shrewd move.) He stressed instead his thought that Congressmen go to Washington and after a time “lose their way”, whereas in Walter’s mind he shared the idea of the Founding Fathers – a person going to serve for a few terms then returning to his business or farm. (He didn’t come out and impose a term limit on himself, though.) John also described himself as full of youth, enthusiasm, optimism (in the mold of Reagan), and energy. Also he made a key point of his daily experience in dealing with the law and Constitution as a practicing attorney. 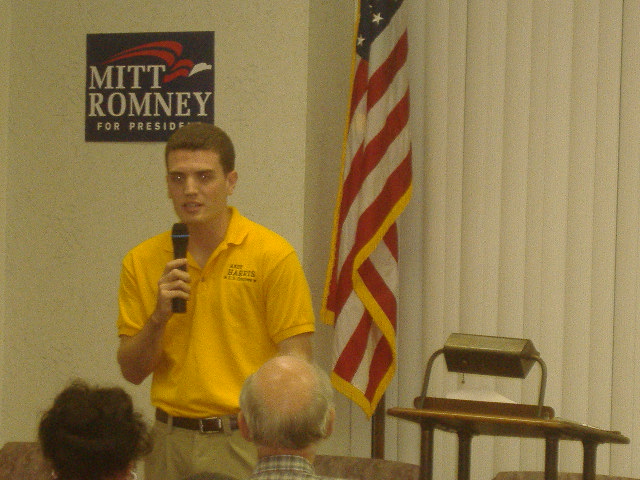 Unfortunately, Andy Harris could not be with us last night as we had the misfortune of scheduling our event on top of another he was committed to. But we arguably had the next best person to describe him in his Political Director, Chris Meekins.

Meekins talked a little bit about Andy’s family and active-duty military background (Operation Desert Shield/Storm). He also touched on the support Andy has from his fellows in the General Assembly (7 of 8 district Senators and over 10 Delegates), and termed Harris a “principled conservative.” In terms of policy, that translated into a hard line on illegal immigration (the idea of in-state tuition for illegals was “ludicrous”), taxes (Harris would oppose “all new taxes”, while Meekins claimed that Gilchrest voted for $15 billion in new taxes via the farm bill), and the Ahmadinejad visit (Harris would move to cut off federal funds to Columbia for inviting the Iranian despot.)

Another issue raised by Cathy Bassett was addressed by Meekins. Disputing the claim that Gilchrest was the most electable, Meekins pointed out that the Democrats redistricted the state in such a way that all of the Republicans were lumped into two Congressional seats (1st and 6th Districts.) So the Democrats conceded these two districts in order to solidify six seats in Maryland’s delegation.

All in all it was quite informative for the people who made it out. There is one more polling list I wanted to mention though.

I found it interesting to see how many “paid” votes a candidate got per “raw” vote. If you divide the two numbers you see who supposedly has the deepest support (or the deepest pockets). On the Presidential side it worked out this way:

The average was 5.82 paid votes per raw vote.

In this case, the average was 5.89 paid votes per ballot.

I also want to point out that I got promotional items from just two campaigns – Ron Paul’s and Mitt Romney’s. (You can see some of it in the photo backgrounds.) I also made up a few Tom Tancredo items since his handout was readily available on his website. For the record, Ron Paul’s campaign was also the most responsive about sending someone down but backed out toward the end. I also got a late reply from Alan Keyes’s camapign but having started so late I didn’t figure on getting anything there.

By the way, I still have a boatload of items so the next time you see a GOP table most of the items are leftovers!

My fellow WCRC officers: George, Marc, Brad, Helen, Dave, and Tom – couldn’t have done it without you. I had the easy job standing in front of everyone.

Those speakers representing Presidential candidates: BJ, Ryan, Bonnie – thanks for sticking your neck out for a person you believe in. I may not agree with them but you argued for your people well.

The Congressional candidates and their seconds: Joe, John, Cathy, and Chris – most of you came a long way to speak to us and we wish you all the best. Let’s make it a good, hard-fought, and clean campaign that discusses issues.

Finally and most obviously thanks to all of you who participated in the audience. It was a complete crapshoot how this would turn out. It may be I was shooting for the farthest of stars, but I got pretty far past the moon nonetheless. And I did find out tonight at the WNC meeting that Joe Gidjunis will post the results on his Daily Times blog so we’ll get a little bit of pixels besides me anyway.

Here’s hoping we don’t have to do this Presidential Straw Poll thing for another 8 years!