Once is an occurrence, twice is a trend.

Over the last couple days, our mailbox began to experience the quadrennial contest of: how can we make Jim Mathias look Reaganesque this time? The second one came Wednesday and if experience is any guide I’ll bet we get eight to ten more – have to spend that quarter-million in the bank somehow, even if it is to prop up the Senate Democrats under whose auspices these were sent.

Bear in mind my wife and I are 4x Republicans.

On the top one I received Monday, it claims that Mathias “worked successfully with Governor Hogan to cut taxes for veterans.” (There’s that Governor Hogan guy again. Isn’t the Democrat nominee named Jealous?)

That claim is basically true: Mathias was an initial co-sponsor of a mostly Republican bill to increase the exemption of military income for taxation. This finally passed in 2015 on a unanimous Senate vote and 137-0 in the House. This was a bill introduced in several sessions in a row that finally had a receptive governor. Sometimes Mathias was a co-sponsor, oftentimes not. But he couldn’t get it passed with a Democrat General Assembly and Democrat governor.

Another claim is that he “returned thousands of dollars to taxpayers through opposing legislative pay hikes and operating office annually under budget.” I’ll take his word on the latter, but the former comes with an asterisk.

Indeed, Mathias voted for SJ5 in 2010, which rejected the recommendations of the General Assembly Compensation Commission that would have increased salaries for the 2011-14 term – as did everyone else in the House of Delegates as it passed 141-0.

But by law, this comes up every four years. So where has Mathias been in the last eight years?

In 2014, a similar bill to that which passed in 2010 (SJ9) was put up by a group of GOP legislators. Did Mathias cross the aisle and co-sponsor? Nope. And the 2018 version was enacted without a peep as no legislation was considered on that subject.

Mathias also likes to hang his hat on the fact he voted against the “rain tax” in 2012, which he indeed did. But there were some other parts of it he doesn’t like to bring up:

My other flyer talked about the idea of beginning school after Labor Day, which was actually already practiced in Worcester County. And while Mathias was already beginning to get himself tight with Hogan (based on news articles of the day) the legislation he sponsored didn’t go anywhere.

But the more interesting item came from the statement about Jim “avidly fights for seniors, affordable prescription drug prices, and our rural health care delivery.” The bill cited was from 2017, and it’s actually one I used on the monoblogue Accountability Project. The bill Jim touts? It was a Senate joint resolution called “Protection of the Federal Affordable Care Act.” I wrote this about the companion House resolution that actually passed:

Since it’s not protection FOR us FROM the ACA, this bill is less than worthless. In fact, be it RESOLVED that health care is NOT a right. Let the ACA die and start all over with a state-level, market-based system that embraces competition, patient choices in coverage levels, and encourages us to use insurance as it is supposed to be used: as a hedge against unforeseen risk like auto insurance is.

And before we get too much into the idea that Mathias in Larry Hogan’s right-hand man, let us not forget (thanks to the mAP I haven’t) that Jim voted to override 5 of the 7 key vetoes Larry Hogan tried to achieve. So in a small part thanks to Jim, we have expensive solar energy boondoggles, weaker standards for our state schools, the “travel tax,” a Board of Public Works that doesn’t get to vote on the public work of school construction (see below), and overly burdensome to businesses paid sick leave.

Now how about this funny thing: since I didn’t put this post to bed when I went to bed last night, flyer number 3 showed up today. And this is a good one, if you like a laugh. 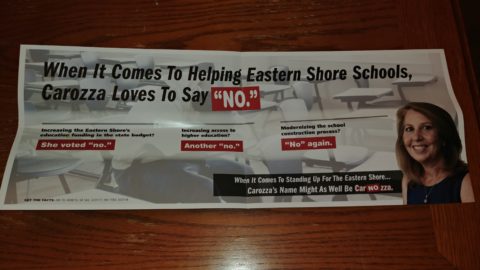 Surprisingly, they picked out a rather good photo of Mary Beth.

But here’s what they would like you to believe Mary Beth “loves to say no” to:

A backroom-amended state budget. The Senate Democrats cite HB70 from 2015, which was the FY2016 state budget. The oddity is that the FY2016 budget originated in the House. (In practice, the budget process begins in the House on odd-numbered years and the Senate in even-numbered years – so that year’s budget was HB70.) Turns out it was Mary Beth’s committee (Appropriations) that had first crack at it and they voted the first reading version as amended in her committee out 25-0. On third reading the House passed their version 129-10, with Mary Beth voting in the affirmative.

But then the Senate got a hold of it, and made more amendments – so much so that, while their version passed the Senate 46-0 (with the lone non-voter being the absent Jim Mathias, strangely enough) neither body would blink. When both bodies refused to recede, a conference committee was formed – and here’s where it got interesting. I’m not saying that George Edwards is a “token” Republican, but out of 10 people appointed to the conference committee he was the only non-Democrat. (Two other Republicans were appointed as “advisers” out of a body of another eight.)

Thus, these great minds went to hash out the differences and, given the fact that not one person from the Eastern Shore was in that room, I’m suspecting that we got royally screwed. The vote Mathias (and let’s face it, I’m sure he’s got his fingerprints on this one) is citing is that vote to accept the report out of that stacked conference committee. Not a single Republican voted for that budget.

And since Jim Mathias wasn’t in that room, how was he to know what funny business went into that budget – a budget that Governor Hogan couldn’t veto? He wasn’t fighting too hard for us from the sidelines.

As usual, Democrats fail to tell the whole story.

Increasing access to higher education – for those with a criminal record. This bill was part of a far-left movement known as “ban the box.” In essence, the idea is to eliminate references to one’s criminal record on job and (in this case) college applications. SB543 from 2017 is the subject of the “ban the box” vote they cite. Mary Beth joined all but a handful of House Republicans in opposing the bill. In addition, she voted against the House version and also to uphold Governor Hogan’s veto at the beginning of this year’s session. She was very consistent in opposing the bill.

So let’s take a look at Jim’s record on this one. On both SB543 and HB694, Jim was happy to vote for making it easier for criminals to access your local college campus. But when he became aware that Governor Hogan vetoed the bill and Mary Beth was going to be his opposition, he suddenly decided to get tough on crime and voted twice to sustain the Hogan veto.

As is oftentimes the case, Jim stuck his finger in the breeze and decided that maybe he better get the Hogan wind at his back.

Placing school construction at the mercy of backroom deals. As originally envisioned, HB1783 from this spring was intended to make schools safer and more modern – not remove their construction from the purview of the Board of Public Works and place an appointed committee in charge of them. But an amendment (#4, here) that was added to the bill in Carozza’s Appropriations Committee was designed to punish Comptroller Peter Franchot for not being a good Democrat team player and instead often supporting Governor Hogan on the BPW.

From that point on, Carozza was consistently against the bill in the committee vote, on third reading, and to sustain the Hogan veto. Makes sense as we elect both the Governor and Comptroller, keeping 2/3 of the BPW accountable to us. (The Treasurer is appointed by the General Assembly, so it’s one step removed from our control.) And it’s not like the governor didn’t want the bill. As he explained in his veto letter:

I was looking forward to signing House Bill 1783 as originally drafted, which was intended to streamline school construction and raise annual funding to $400 million to be earmarked for school building and renovation. It also does a tremendous disservice to the citizen volunteers who worked for nearly two years on the 21st Commission to up–end their efforts to modernize school construction for purposes of political retribution.

On the other hand, Jim Mathias had little objection to backroom deals. While he voted for an amendment that would have eliminated the BPW language, its failure wasn’t enough to dissuade him from supporting the bill on third reading and overriding the Hogan veto.

Hey guys and girls on the Maryland Democratic Senate Caucus Committee, just keep pitching me votes so I can continue to make mincemeat of Jim Mathias’s voting record because, frankly, it’s completely wrong for the Eastern Shore – as I have demonstrated for the last 12 years.

Unless you want to bankrupt yourselves printing and mailing me more full-color full-page flyers to the point where I get several different ones on a daily basis, I daresay that I have more bad Jim Mathias votes than you have flyers. Don’t doubt me.