Here’s another in my long-running series of things from my e-mail box and elsewhere that deserve a mention but not a full post. Generally I shoot for three sentences to two paragraphs for each, but that’s simply inclusive and not a strict guide.

In the fall of 2015, there was one candidate out of the rugby scrum of GOP presidential hopefuls who stood above the rest when it came to experience in governing combined with serious thought about the issues. Unfortunately for us, Bobby Jindal folded up his campaign tents rather quickly, but at least he can still dispense truth like this statement:

The Democratic Party has come out of the closet this year in full-throated support of single payer in health care. Those of us who are health care policy wonks have known this was their intent all along, but they were previously smart enough not to admit it.

It’s been a few weeks now, but I knew I would get to write about this in due course and Jindal’s statement is still worth the read. So I kept it around.

Actually, since the Republican Party doesn’t seem to want to favor limited government anymore, choosing instead the goal to be the ones running the circus and supposedly doing it more efficiently, maybe Bobby – who actually cut government spending during his two terms as governor of Louisiana – should join a group devoted to rightsizing government.

Yet there was a controversial decision made by one such group, the Constitution Party (and as disclosure, it’s their candidate I voted for last time – so I follow them more than most people do.) Gary Welch, the Communications Director of the national Constitution Party, explained their decision to back Roy Moore in the Alabama Senate race. This also included a fundraising drive.

To be honest, I’m not sure what the upside of backing Moore would have been had he won. I doubt he would have changed parties again – Moore was a Democrat up until the Clinton era, so you could conceivably add the decades-old accusations against him to the blue side of the ledger – and the amount raised by the CP would have been less than a drop in the bucket in the race. I’m figuring they were assuming Moore would still prevail based on the voting patterns in the state, and admired his stances reflecting the fact we are endowed with rights from our Creator, not from government.

But on the other hand, money raised in support of Moore could have been better used on ballot access and working against a system that somewhat unfairly burdens smaller political groups by making their ballot access more difficult. They may have had common cause but to me that wasn’t a smart use of limited funds.

One last thing about the Moore race that bothers me, though: no one pointed out that, on the same day that the Washington Post broke the Moore story, they also put up a more glowing portrait of Doug Jones prosecuting the last remaining 16th Street Baptist Church bombers from 1963. (The story was since updated to reflect election results but the link still shows November 9, the day the Moore accusations went online.) What a coincidence, eh?

Then again, they’re not the only group who hitched their wagon to Moore hoping for some sort of gain. 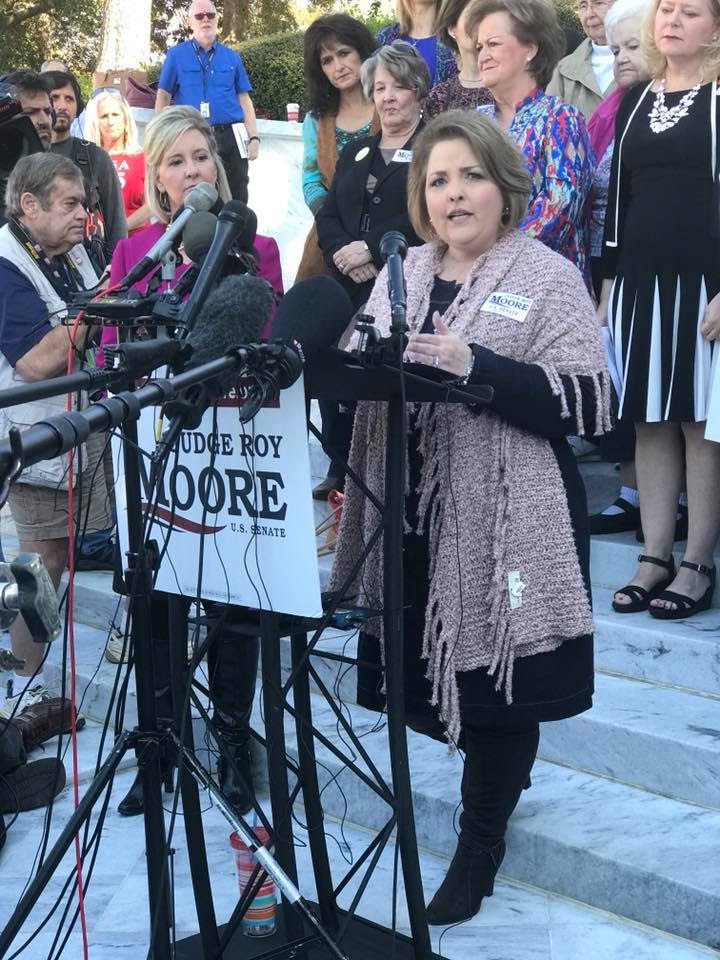 (Photo via Women for Trump.)

You may not know the woman at the podium, but I do. Not that I’ve ever met Amy Kremer, of course, but when you’re writing a book on the TEA Party you see the name a lot. In this case, though, it’s a group she co-chairs called Women Vote Trump, and the photo was part of a fundraising appeal from that group on Moore’s behalf. Now I won’t pick on Kremer aside from the fact she seems to be quite the opportunist – she left the Tea Party Patriots shortly after their formation because she wanted to work with their rival Tea Party Express group, and left them for Women for Trump once the Tea Party fizzled out – but this is what aggravates people about politics: the number of hangers-on who make their living from fundraising.

But it’s not just Republicans. This is a snippet of something I received from our erstwhile Vice President:

This Republican plan isn’t anything more than the latest, worst edition of the same-old trickle-down economics that has failed time and time again.

Even more than that, let’s be clear about what’s happening here. The goal the Republicans have today is the same goal they had when trickle-down economics first came on the American scene: Their long-term goal is to starve government. To say we don’t have the money to pay for Medicare, for Medicaid, for Social Security. We heard it last week when one of the leading Republicans in the Senate actually said after passing this new tax cut that we don’t have the money to pay for children’s health care.

Simply put, the values reflected in the Republican budget are shameful. They aren’t my values. And I don’t believe they’re America’s values either.

And so it’s time for a change. Right now, you can show that these actions have very real consequences. From now until 2018 and beyond, I’ll be doing everything I can to help elect a new kind of leadership in our politics. Folks who actually understand the issues an average American faces. Folks who aren’t scared to stand up to big corporations. And more importantly, folks who are absolutely committed to standing up for working people.

Yes, Joe Biden has his own political group called American Possibilities – literally a web portal that solicits contact information and donations. Certainly he will seek out the most liberal people to donate to. But is that really what we need?

Apparently this is Joe’s version of that three-letter word, J-O-B-S. Regarding that subject, I haven’t done a struggling blogger “bleg” story for awhile, but as a guy who’s been laid off before the holidays a time or two I could sympathize with Peter Ingemi’s story of losing his. Fortunately, it may now have a happier ending.

Now I have a question: have you finished your Christmas shopping yet? Over the last several years I have reported on a couple organizations that promote “made in America” presents, so if you’re looking for stocking stuffers or that perfect gift, you may find it from the Alliance for American Manufacturing 2017 Made in America Holiday Gift Guide. Those who are ambitious enough to make it a challenge can also sign up for the Made in America Christmas Challenge that’s sponsored by Patriot Voices. But they concede:

We understand that there are things that are simply not made in this country – like iPhones. It may not be possible to buy everything made in the USA, just try your best.

Maybe that’s why so few have taken the challenge – just 90 at the time I linked. Either that or no one really cares about former Senator and presidential hopeful Rick Santorum anymore.

I may as well finish with a programming note: as opposed to this series that’s been around for over a decade, I think I’m dropping the Don’t Let Good Writing Go To Waste feature. It’s just a pain to compile, and besides it behooves you to track your political opponents anyway. (In my case, it’s to set them straight.)

It seemed like a good idea at the time, but the concept got old fast and if I’m not excited about it then I won’t do them. So I decided to go no further with it, just like this post.