When the 2015 season came to a close in early September, you may recall that the Shorebirds embarked on a project that, it was hoped, would reduce the number of games lost to weather. By stripping the field down to bare earth and reworking the entire drainage system (along with redoing the sod) I have to say the field looked very good most of the season and perhaps that may have had a little to do with the Shorebirds finishing second in the league in fielding percentage. That set of renovations, along with improved lighting, was the second of three phases in a complete renovation of Arthur W. Perdue Stadium – the first phase, completed during the 2014-15 offseason, concentrated on player amenities.

With the field complete, Delmarva was closer to the league average when it came to openings. No SAL team went without at least one rainout (Columbia, Greenville, and Hickory came the closest by having just one) but the Shorebirds had 65 openings and the league averaged 66.3 per team. However, while attendance rebounded slightly this year to 209,120 patrons, the per-game average fell by 13 fans to 3,217. Given the performance around the league, however, holding virtually steady in attendance can be regarded as a victory: only three of the thirteen returning teams increased their gate average from 2015 to 2016 and the overall league average increased by just 62 per game despite the relocated Columbia Fireflies drawing nearly twice as well as the Savannah Sand Gnats they replaced. West Virginia, Rome, and (particularly) Kannapolis saw precipitous year-over-year declines in their average draw.

The program for this offseason, though, is an ambitious one, and it’s already underway. 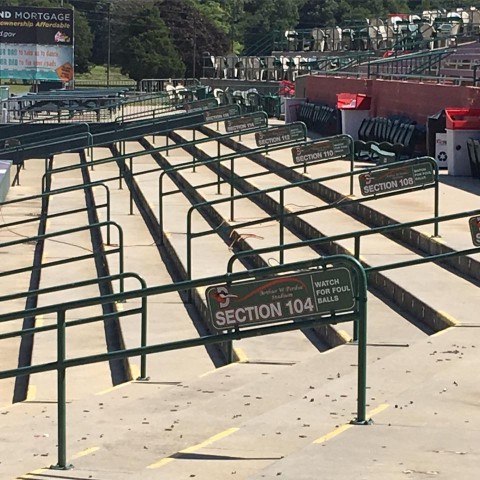 One of the key changes will be all new seats, which includes the replacement of the bleachers that were the general admission seating with regular fold-up box seats. This can be a good thing – if the seats are the same size. While I am slowly losing pounds and inches, my concern is that the new seats may be a little bit smaller than the ones they are replacing since fewer seats fit into the original bleacher space because of armrests, so stadium capacity would decrease by some percentage. Of course, the sections can easily be rearranged to suit thanks to the way the seats were originally laid out (you just drill new bolt holes as needed.) I fit just fine into the seats that were there, thank you, so hopefully us bigger folks will have ample room on the new ones.

It’s my understanding that the other key construction project is the extension of the concourse to be a 360-degree concourse, presumably at the level of the top of the outfield fence (so a home run would likely bounce on the concourse.) When I discussed this idea last year, I used another SAL park I’ve visited as a comparison because I recalled it also had a similar setup.

Lakewood’s FirstEnergy Park has most of the same amenities as Perdue Stadium but also uses their outfield concourse for a tiki bar, pizza restaurant, and a third picnic area. It’s nice but I think there are other food and drink possibilities that we could use as well, like moving one of the Dippin’ Dots carts out there or adding mini-hotdog stands. If some of the areas are made a little wider, such as the triangular area near the foul poles, they can use them to set up for postgame entertainment (such as the Thirsty Thursday postgame shows of a decade ago) or pregame activities like the player autograph sessions we also haven’t had in some time.

But the crowning achievement in all this will be the new videoboard. Over the last two to three years the stadium has lost use of the videoboard, the bottom section of the scoreboard (where the player information used to be) and, at times, the scoreboard itself would go on the blink. In truth, a videoboard could serve as a scoreboard with one panel reserved for that purpose. It would also be nice to have an alternate ribbon scoreboard located on the opposite end of the stadium – if the main scoreboard stays in left field, the ribbon would be placed along the first base side. Then you could linger in the outfield concourse but still be able to keep track of the score, inning, balls, strikes, and outs while watching the action.

If you look at the minor leagues from a promotional standpoint, over the last decade the trend has gone away from one-night novelty acts (like Myron Noodleman or Reggi) to a plethora of giveaways of everything from bobbleheads to hats to posters to beach towels to doormats. Fireworks continue to be a staple as well, although my perception is that the difference in attendance isn’t all that great anymore – then again, I don’t go to more than one or two fireworks nights a season. They’ve also become far more clever in figuring out ways to fill the sixteen half-innings that a normal game features with games and giveaways.

But something I think would be interesting (and it can be done with a new videoboard) is a game with no between-inning promotions, walkup music, or PA announcer. It would be sort of like those April midweek nights when there might be 300 people actually in the stands, which is neat because you can hear the players and umpires. It’s probably not in the cards because it would be a promotion aimed at traditionalists like me – the guy who thinks the designated hitter and interleague play should be eliminated – but put it in the hopper.

And lastly, the concern on everyone’s lips regarding the improvements to the stadium is: what’s it going to cost me? They raised the parking fee this year to $4 from $3, although I’ve been a fan long enough to remember when parking was free. (I think some selected ticket prices went up this season, too.) But I have been told that the idea is to hold these fees steady for several years if possible, so once they go up they should be constant for 3-5 seasons.

However, if they eliminate the general admission bleachers for what I would guess is ticketed individual seats, will that now be considered a box seat? Presently there is a $5 difference per seat from general admission to reserved box. My guess is that the new box seats will have their own tier priced somewhere between the current GA price and the reserved box cost (but kept under $10 so it’s still considered affordable.)

If you consider the league as a whole, it’s something of a wonder that Delmarva makes it to the middle of the pack in attendance because it’s among the smallest markets. (The most comparable SAL franchise in terms of population and metro area is Rome. Hagerstown and Hickory are in slightly larger cities and counties, while the city of Kannapolis is of similar size to Salisbury but lies on the edge of the much larger Charlotte metro area. The rest are significantly larger in population.) And once the thrill of getting a new team wore off after the first few years, in recent seasons the attendance has been remarkably consistent at around 3,200 per game – which translates to just over 200,000 per year.

These improvements probably won’t bring back the days of 300,000 or more attending Shorebird games over the course of a season, but I think 250,000 can be a realistic expectation if the product on and off the field is improved. For the millions of dollars spent on renovations, it bears noting that each person probably spends at least $20 at the ballpark so an extra 50,000 patrons brings in at least $1 million. If you add that much value to the experience, the dollars spent on renovation will be worth it.

I had no idea until I checked out the hotel the first night I stayed here (to interview for my old job the next morning) that Salisbury even had a minor league baseball team – I basically followed the Mud Hens so I knew a little about the other Tiger affiliates and the other teams in the International League where the Toledo nine plays. Since the Shorebirds were in neither category, I was pleasantly surprised to find that out about the city I would adopt as my hometown.

To be quite honest, though, having a brand new, critically acclaimed stadium (at the time, Fifth Third Field was 2 years old) in a much larger AAA market spoiled me for Delmarva, so I was left a little bit wanting for the first season or so. It took getting used to. But now that I am here and have probably attended a couple hundred games or more, I would like them to stick around so I’m pleased to see someone else wants to improve the Shorebirds’ nest and maybe make it like new again.

I can’t wait to see what the old place looks like come April. But it would look a lot better with the 2017 SAL pennant on the flagpole.